Moving to Los Angeles was such a culture shock.  There was so much to do, so much to see, so much to learn.  But the people, whoa.  That was a doozy of a difference.  People were laid back, but they just weren’t as friendly as I was used to.

In Iowa, you could strike up a conversation with a total stranger just about anywhere.  In LA, strangers would look at you like you were nuts if you tried to talk to them.  People in the Midwest are just friendlier, but maybe I’m biased.

When a neighbor would move in, I would proudly bake cookies or a pie to deliver as housewarming gift.  People didn’t do that kind of thing in L.A. When we moved back to Iowa, it brought tears to my eyes when the first neighbor showed up with cookies… then the second… then…

But other than making pies for neighbors, I really didn’t venture into that form of baked goods.  I have an awesome recipe for chocolate chip pecan pie that I received from a coworker years ago… that’s pretty much the only type of pie I make.  Fruit pies. Cream pies. Meringue.  Good Lord they scare me.  Cookies aren’t supposed to be the perfect shape or size.  Brownies and fudge are just squares.  Pies – oh, so many things seem like they could go wrong…  a homemade crust, the filling, any topping.  My chocolate chip pecan pie recipe was just a frozen pie crust that was covered with a simple one-shot filling.  The only thing that could go wrong was if I overfilled it.

Then last month, Pillsbury representatives threw out a challenge for me.  Would I be interested in baking a pie for the holidays?  Hmmm.  I was planning on being at my MIL’s house so I said “If you can ship it there, I’ll give it a shot.”  I figured we could make it a grandma/grandkid/me project and if it flopped I could blame it on the kids.  I’m serious, I would have blamed them but nobody would have believed it since I have a reputation for my cooking ‘issues’. 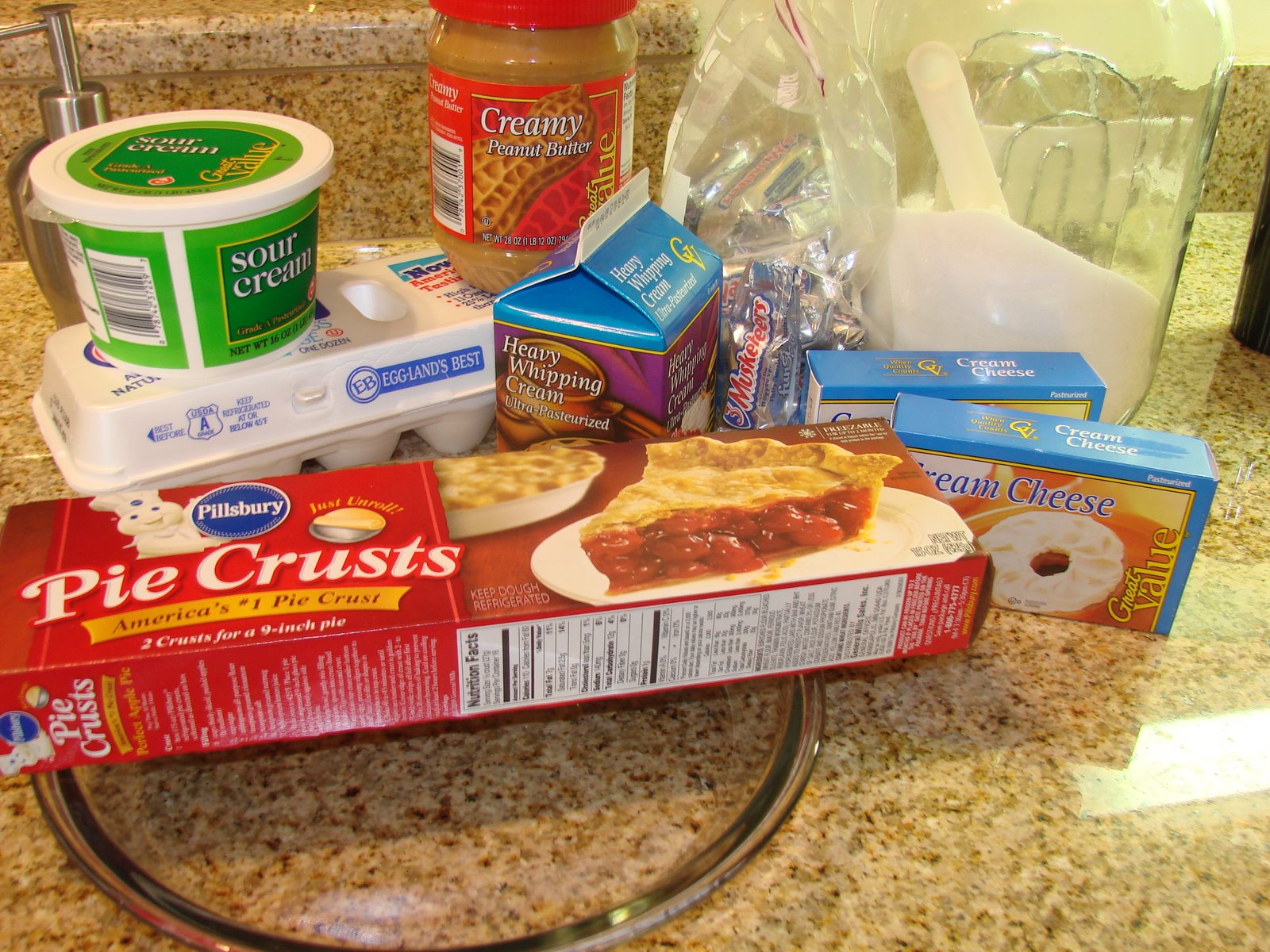 Anyway, the package I received from Pillsbury included two 9″ glass pie dishes, adorable Christmas cutouts, a pie server and a CD of recipes.  We browsed the recipes and found a candy bar one that sounded good.  We purchased the ingredients then went at it. 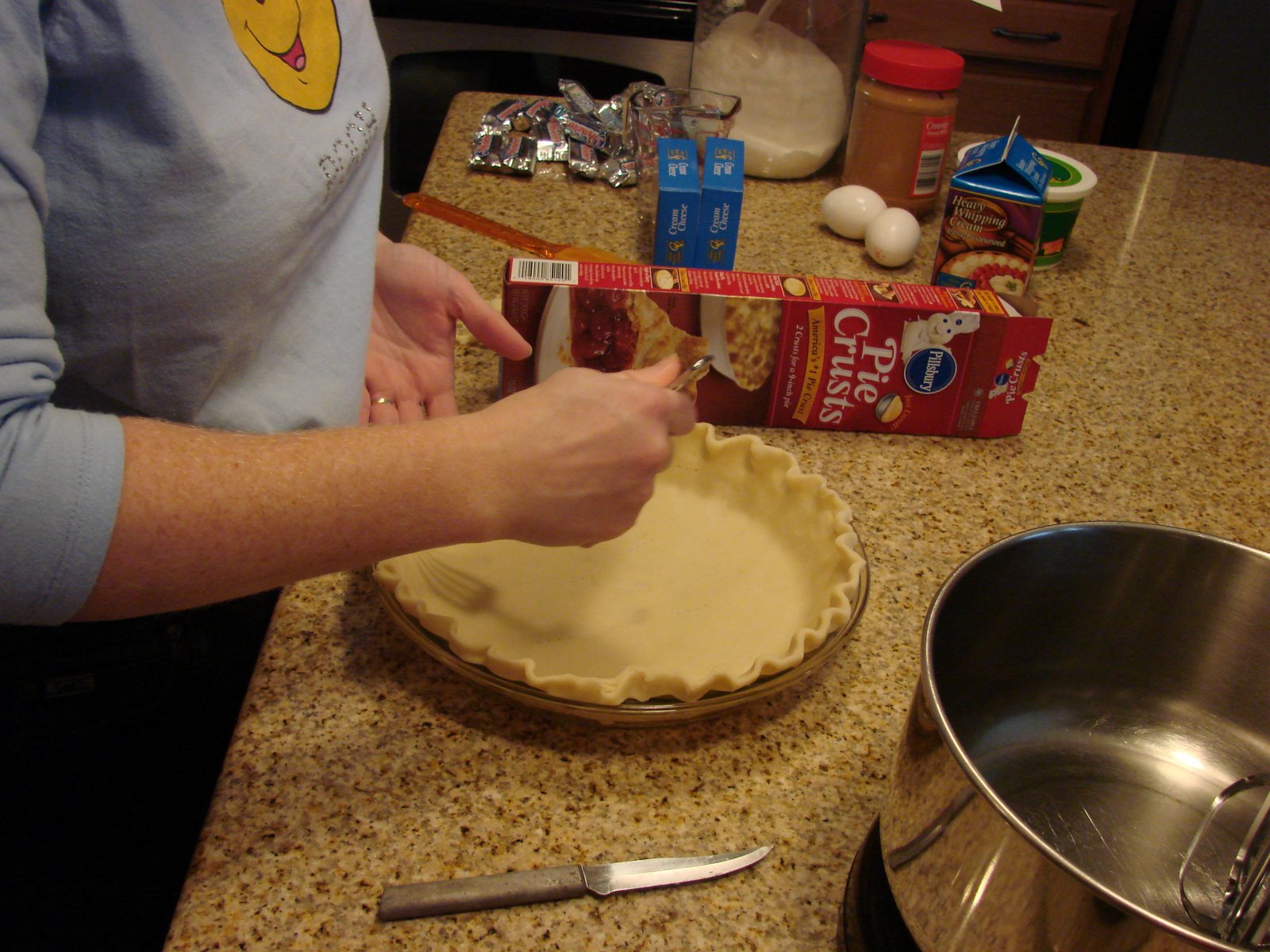 My MIL explained some of the basics – like letting the crusts get to room temperature first.  She also showed me how to make the scalloped edges around the pie before adding the filling and how to trim it back.  On a funny note, she confided that her neighbor (whom I referred to as “Pie Making Neighbor” in a post last summer) uses Pillsbury Refrigerated Pie Crusts just like these for all her pies.  Geez, I thought her pies were totally homemade. 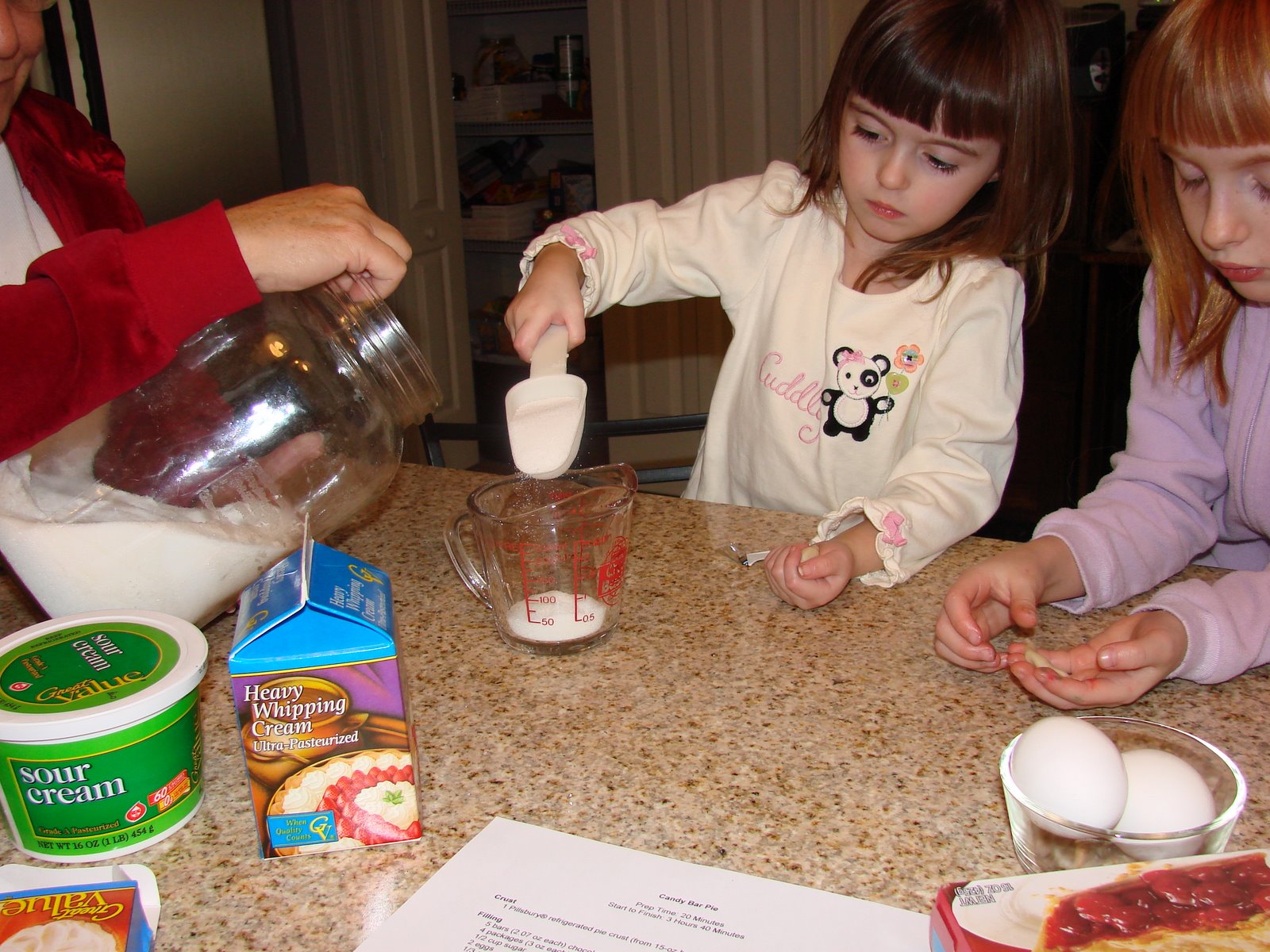 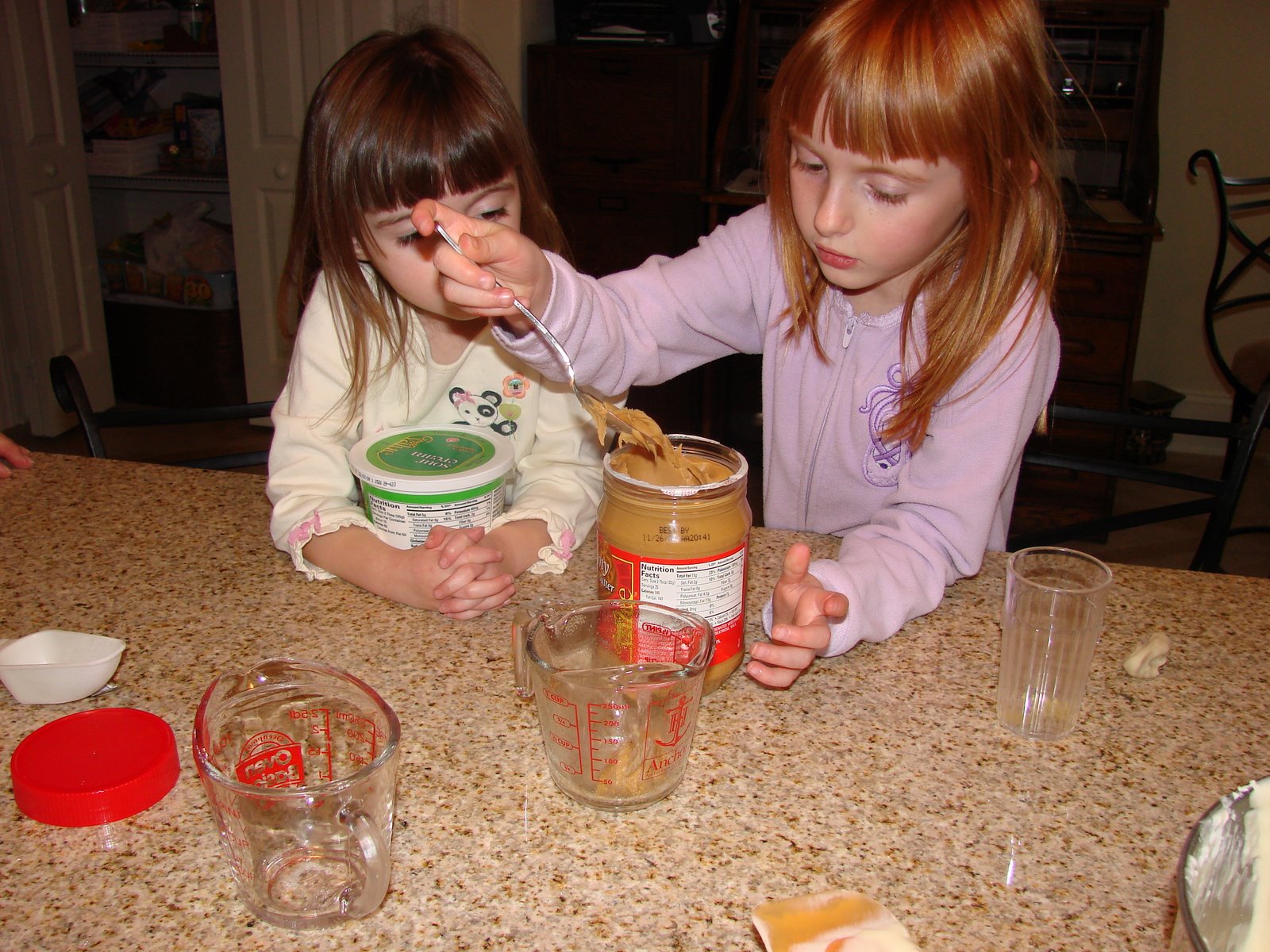 It wasn’t nearly as hard as I thought it would be and we had a lot of fun.  The pie ended up tasting great and was rich but delicious.  I honestly couldn’t believe how easy it was and realized that this isn’t going to be my last pie.  The next time a neighbor moves in, they’ll be getting one and it won’t be my usual!  And so you know… that picture of the piece of pie at the top of my post… that’s the final product of our Pillsbury challenge!

Now I have to ask… what have you done for your neighbor lately?  Baking for a new neighbor (or even an existing one) is the ultimate guilt-free baking project.  It will brighten your day and theirs!  To encourage you to be a Midwestern neighbor no matter where you live, I’m giving you the chance to win your own pie gift package! 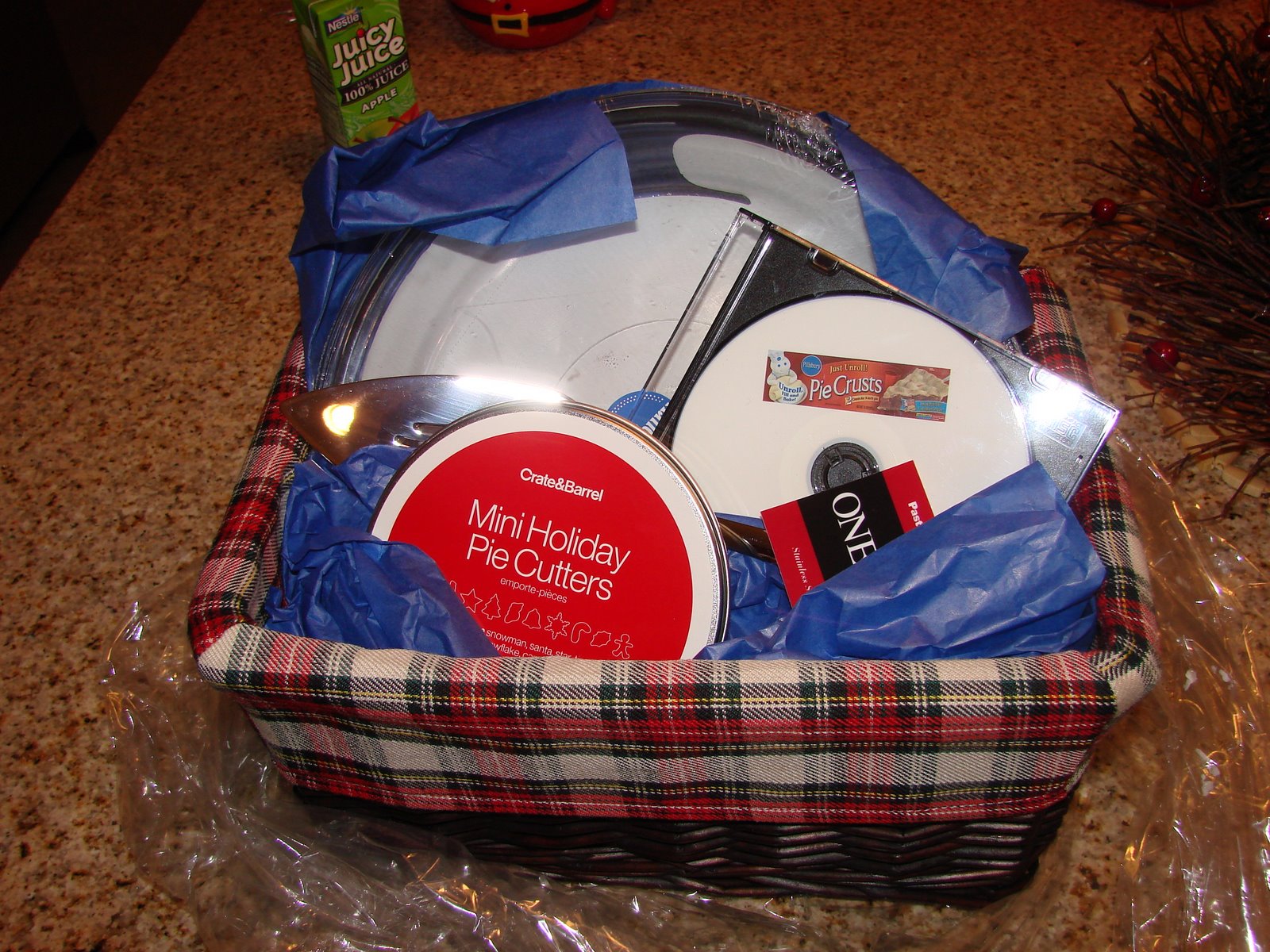 One You-Can-Do-It-Too Pie Basket compliments of Pillsbury.  (They actually termed it a Holiday Gift Package but I like my name better.)

Sometime on January 20, 2009, a winner will be chosen at random (using random.org) from all comments left. Winner will be posted on PRIZEYWinners.

227 thoughts on “What Have You Done for Your Neighbor Lately?”