I remember quite well when Ishtar, the movie starring Dustin Hoffman and Warren Beatty, hit the theaters in 1987. It was one that I wanted to see because it included a couple of my favorite actors of the time. Both Charles Grodin (Heaven Can Wait) and Carol Kane (Taxi) had smaller parts, and I knew that they both would steal the show if given the opportunity.

I was an underclassman at a community college at the time and really didn’t have the extra funds to see movies at the cinema. Instead, I would usually wait for it to be available on VHS via our local Blockbuster. But soon after Ishtar’s theatrical release, I began hearing news reports about how bad the movie was. For her efforts, the director, Elaine May, went on to win the Golden Raspberry Award for Worst Director! I never did see the movie after those reviews!

This memory had completely escaped me until we began playing a new board game by the same name – Ishtar. Part of iello‘s summer releases, it is NOT a tribute to the movie! It’s a tile-laying game that might remind many of Kingdomino or Queendomino and pays homage to the ancient goddess. In Ishtar, you and up to three other players take on the role of gardeners trying to create the most wonderful flowerbeds, which will please the Queen. The person who does the best job will catch the attention of the King, who will make the winner his official gardener! 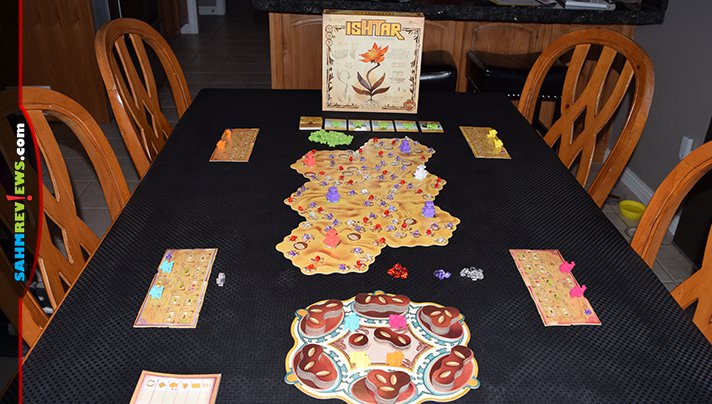 At the beginning of the game, each player receives a random Player Board, four Assistant meeples matching the board’s color and a purple gem. A large Carpet Board is placed within reach of all players, with two of the four Assistant meeples from each player being placed on it. Terrain Boards equal to the number of players plus two are randomly assembled in the center of the play area. Each rock space on the board will receive a matching colored gem and the remaining gems are set next to the board as a bank. Six Cup Tiles are randomly placed on the six spots on the Carpet Board. On each of these Cups a stack of six Basic Vegetation Tiles are stacked, face down. Blooming Tokens are also placed in the center of this board.

The deck of 26 Tree Cards are shuffled to form a draw pile and the first five cards are drawn and placed face up next to it. Each of these exposed cards has a tree placed on it, with the rest of the trees left in a pile next to the draw deck. First player is determined and given the watering can! 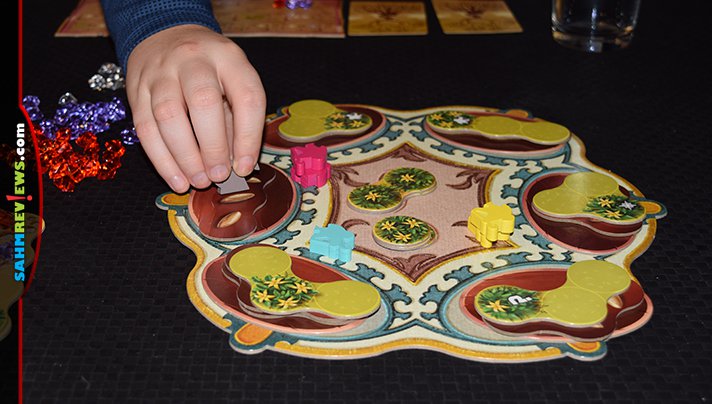 On your turn you will perform five actions in order. First you will choose a Vegetation Tile from the Carpet Board by moving the watering can one space clockwise (the first player chooses any position to start the game), taking the one on the top. If you don’t want the current tile, you can pay gems of any color to move forward (one gem per additional space). Then reveal the topmost tile from the pile from which you began your turn. 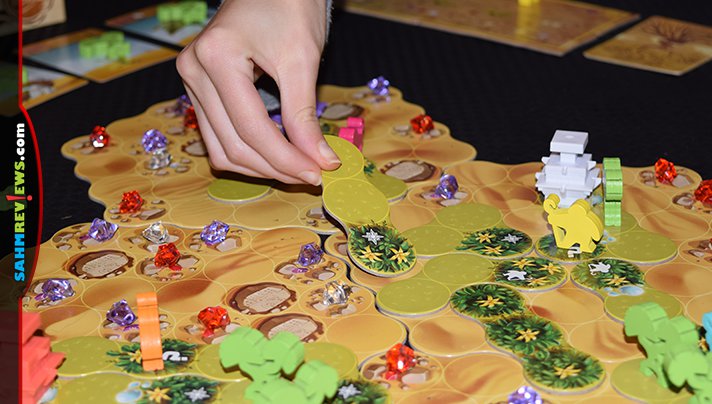 For your second action you will place the newly-acquired Vegetation Tile onto the board. Tiles may only cover sand and/or rock spaces and may not be placed over fountains, tablets or other Vegetation Tiles. At least one space of the tile you are placing must be adjacent to a fountain or to any other Vegetation Tile already placed. You also may not place a tile that would connect two different gardens of different fountains to each other or if it would cause several Assistants to end up on the same flowerbed, even if they belong to the same person. When you place the Vegetation Tile, collect any gems from the spaces you covered! 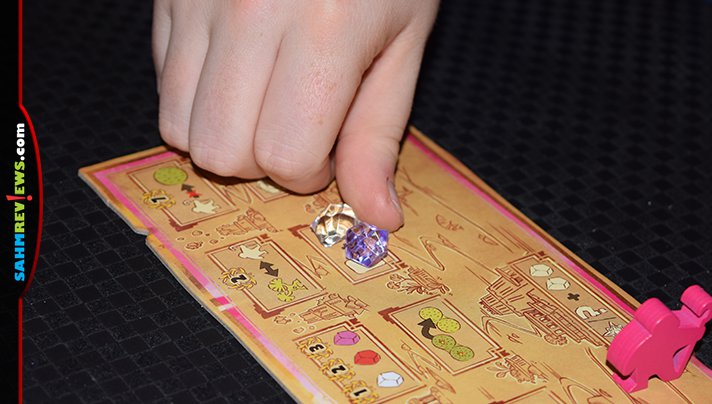 On some tiles there are special icons that award additional actions when placed on the board. An assistant icon allows you to place one of your Assistants on that tile to cover the icon. A skill icon allows you to unlock a skill form your Player Board by taking two gems of any color and placing them on any free skill of your choice. You must complete lower level skills before unlocking the upper levels. A wild icon means you can use it as an Assistant or a Skill action! 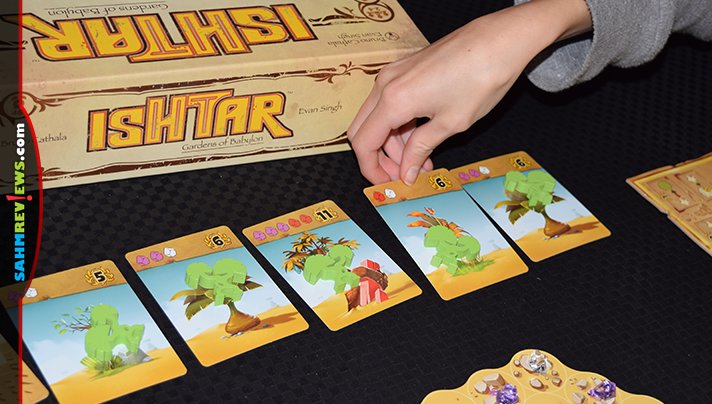 Lastly you may purchase a tree from the five available by paying its cost in gems. That card is placed face down in front of you, while the wooden tree marker is put onto any free grass space on the board. You can purchase more than one tree if you can afford it! New tree cards are then revealed to fill up any empty slots at the end of your turn. 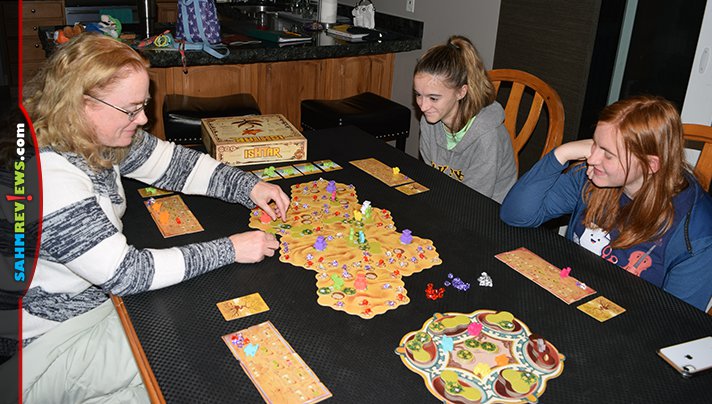 A game of Ishtar ends when any two stacks of Vegetation Tiles on the Carpet Board are empty. The current round is completed so that all players have had the same number of turns before proceeding to final scoring. Any tree cards you have where you couldn’t plant the tree are discarded. All planted tree cards are revealed and you’ll receive points as stated on the card. Score one point for each visible flower in flowerbeds controlled by your Assistants. Four point are gained for each purple fountain that you control (most flower spaces connecting), six for each red fountain and eight for controlling the white fountain. Additional points are received for unlocking skills on your player Board and the person with the most points wins Ishtar and becomes the King’s official gardener! 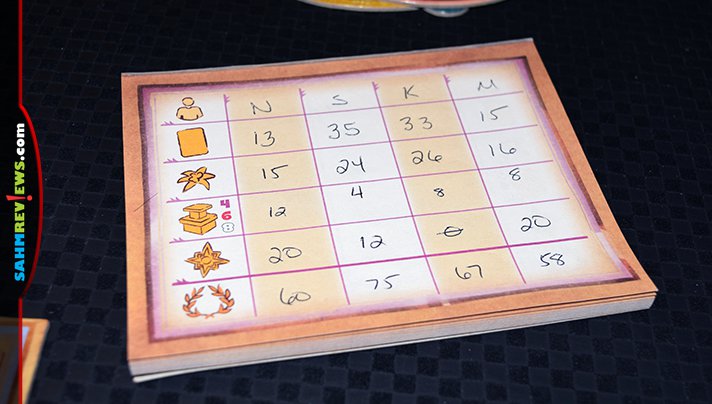 While we have played a number of tile-laying games that are similar in structure, Ishtar elegantly replaces them on our shelf. The decision to use rounded tiles instead of a traditional hex pattern and the inclusion of custom cut meeples shows the attention to detail used in the creation of Ishtar. You’ll find your copy at your favorite local game store or on Amazon. Stay on top of what iello is cultivating by following them on Facebook or Twitter!

Is your flower garden king-worthy?

21 comments on «Ishtar Board Game Overview»