It’s natural for families to want to play games together. Unfortunately the ones that normally appeal to the younger crowd require you to act silly, put plastic retainers in your mouth or hit the loser in the face with whipped cream. Of course there are the classics that have been scaled down for younger audiences like Monopoly Jr., or ones as in the photo above that were originally designed for that age range.

The expressions on our daughters’ faces are not staged. Chutes and Ladders was fun for them – once. After their first play it was a chore. For us and them. We knew right away they would be ready for REAL board games very soon. But they were still too young to grasp onto all of the strategic moves. We did what we’re going to recommend to you. Start them off with junior versions of popular strategy games to get them used to more complex mechanics and critical thinking!

We’ve put together this list of currently-available junior, family and “My First” versions of highly-popular hobby games that you can add to your game library today! If you have family members in the 3-6 age range, we’re positive there is at least one solution here for you! 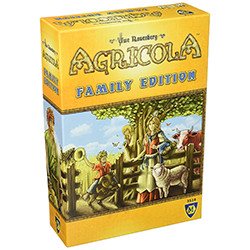 The 17th century was not an easy time to be a farmer. Agricola Family Edition is the introductory edition of Uwe Rosenberg’s celebrated classic. Designed for 1-4 players, the game features no cards and simplified rules, making it a perfect entry point to Agricola for younger players, or those who simply want a more casual play experience. Players begin play with two family members and can grow their families over the course of the game. This allows them more actions but remember you must generate enough food to feed your growing family! FULL OVERVIEW HERE!

Blokus Junior is the perfect way to teach kids as young as 5 years-old the art of strategy. Similar to Blokus, the fastest growing strategy brand, the object of Blokus Junior is to get as many pieces on the board as possibly by placing each piece corner to corner. Made with younger hands in mind, Blokus Junior has less complicated pieces, a bigger board, and 10 mini-games to help kids learn how to play the game. Includes 48 pieces, paper templates, game board and instructions. 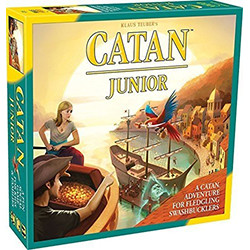 A Catan adventure for fledgling swashbucklers. Explore the Seas Catan: Junior introduces a modified playing style of the classic game giving younger players the opportunity to experience the world of Catan. Designed for players as young as 5 and is a perfect introduction to the Catan series of games for kids and families. Catan: Junior takes place on a ring of islands where 2 to 4 players build hideouts, and the mysterious Spooky Island, where the Ghost Captain lives. Each island generates a specific resource: wood, goats, molasses or swords and players can acquire gold. 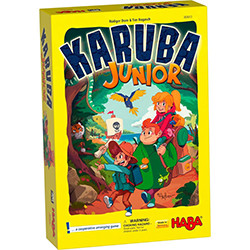 Together players head off on an exciting search for treasure in the jungles of the island of Karuba! Will they manage to arrange the tiles so that they can reach all the treasure. Before the pirates raid the island? They’ll need to work together, and be careful of tigers that will block the paths. With skill and a bit of luck they’ll be faster than the pirates!

A lighter version of Krosmaster Arena! The main spirit of the Arena is brought by Krosmaster Junior, allowing even the youngest players to understand the rules and play with a friend. With the 4 new figures included in the box, or with additional figures too. Game Includes: 2 double sided gameboards. 40 XL scenario cards, 4 exclusive figures & 1 booster including the final version of the Krosmaster cards for these 4 figures. 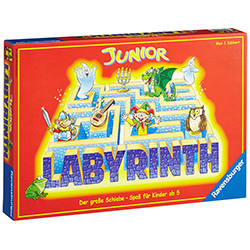 The aMAZEing Junior Labyrinth uses a clever board design to create a series of ever-changing mazes that one to four players must move through. The object of the game is for each player to collect as quickly as possible all seven treasures depicted on their individual treasure cards. To add to the challenge, players know what the next treasure is only after they find the one before it. Before each turn, a maze card is pushed into the maze in a strategic place, helping the player make his or her way to the prize. This means that the entire maze shifts and changes on each turn, confounding some and helping others. 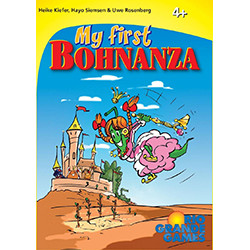 Whoever thinks that the classic Bohnanza game is something only for adults is completely wrong. Older children everywhere, who love planting, trading, and harvesting beans, already enjoy the game! With My first Bohnanza, even younger children will be able to learn the game in small steps. We introduce 10 new types of beans – just for kids – and they can begin their bean farmer journey earning gold coins. 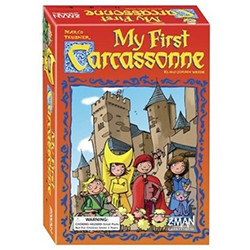 DISCOVER THE GREAT CITY OF CARCASSONNE, ONE TILE AT A TIME! The streets of Carcassonne are filled with kids who are trying to catch the animals set loose for the festival. The city has never been so alive! This version of the modern classic, Carcassonne, has been adapted to allow players of all ages to play together. No need to count points! Each turn, you place a tile to build Carcassonne. When you close a street with one or more kids of your color, you get to put your pawns on the board. Be the first to place all of your pawns to win the game. 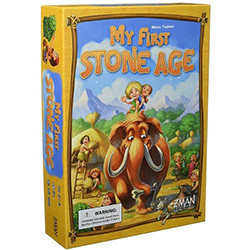 A children’s version of the Stone Age family game. Players will collect goods to build their own settlement. Two stone age children, Jada and Jonon, bring you to the past to discover how the first humans settled the world around them. 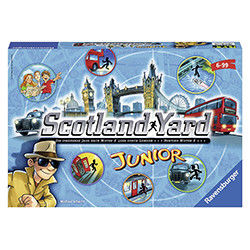 This clever detective game has won awards and fans around the world. Now it’s available in a “Junior” version, suitable for children ages 6 and up. Mister x, the master criminal, is on the run across London. Can you work as a team with other players to capture him? the game board shows a simplified map of London, including well-known sites such as Westminster Abbey, the London eye, the houses of Parliament, the National gallery, Waterloo station, the tate gallery and the Thames. 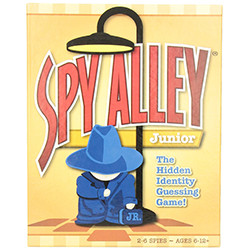 Spy Alley Junior is the hidden identity guessing game. It’s a fun and fast – paced game of hidden identities. Each player assumes the identity on their Spy Identification card. Players use the die and move cards to move their tokens around the game board. If a player lands on the same colored guess space as one of their opponents, they may guess their opponent’s identity. If they are correct, their opponent is out of the game. One key to the game is knowing when to use your move cards. Another is using your memory skills to expose the other spies. 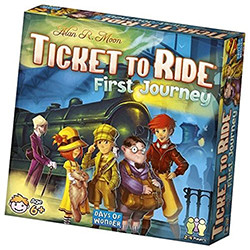 Ticket to Ride: First Journey takes the gameplay of the Ticket to Ride series and scales it down for a younger audience.

In general, players collect train cards, claim routes on the map, and try to connect the cities shown on their tickets. In more detail, the game board shows a map of the United States with certain cities being connected by colored paths. FULL OVERVIEW HERE!

You’ll certainly recognize many of these games in their regular form. Now you have a choice of what to pick when your toddler wants to play a board game with the rest of the family! While they may have scaled-down rules to simply the strategy for all ages, they all are true to their ‘parent’ version and will be just entertaining enough so you don’t have the same expression our kids did!

49 thoughts on “Introduce Toddlers to Modern Board Games”