I grew up in a large extended family, with aunts, uncles and cousins playing a prime part in our holiday traditions. When we got together, it was always a party as we gathered around a card, ping pong, foosball or pool table to challenge each other in whatever ways possible.

These days, we gather together each week with our extended gaming family to play whatever games strike our mood. Sometimes we play against two, three or four opponents but other times we want to accommodate as many people as possible. These Friday game nights are the inspiration for today’s Party Games gift guide. You may want to pick up a couple of these as gifts for coworkers or family or others to have on hand to break the ice at your holiday get-togethers.

Of course, don’t forget to check out our other gift guides for ideas on toys for younger kids, games for teens and adults, home and electronics ideas, games for the family, S.T.E.M. toys and games, dice games and stocking stuffers.  Across all our guides, if you see the

logo, click on it to be directed to an in-depth review! 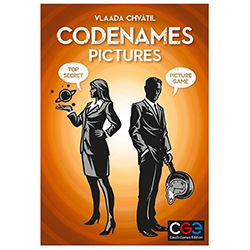 What are these strange symbols on the map? The code for locations where spies must contact secret agents! Two rival spymasters know the agent in each location. They deliver coded messages telling their field operatives where to go for clandestine meetings. Operatives must be clever. A decoding mistake could lead to an unpleasant encounter with an enemy agent – or worse, with the assassin! Both teams race to contact all their agents, but only one team can win. Codenames: Pictures differs from the original Codenames. In this version, the agents are no longer represented by a single word, but by an image that contains multiple elements. 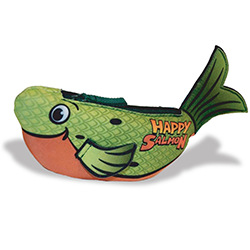 There are no turns. Players call out the action shown on their cards as fast as they can. Actions include a “High 5”, fist bump, switching places and and the “Happy Salmon” handshake. Each time a player matches another player, they both quickly discard a card. The first person to get rid of all their cards wins. Happy Salmon is perfect to take to family get-togethers, ice breakers at work, camp, or if you are just traveling upstream. Check out our video and write-up! 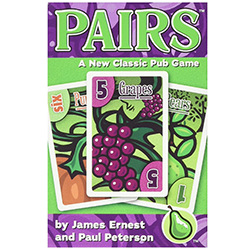 PAIRS is a “New Classic Pub Game” published by HIP POCKET GAMES, an imprint of Cheapass Games. Using a simple triangular deck of cards (1×1, 2×2, 3×3, and so on all the way to 10×10), a single deck of PAIRS supports more than 20 games, all of which can be found for free in THE PAIRS COMPANION.

In addition to the classic fruit deck pictured, there are a myriad of limited edition PAIRS decks featuring different themes and artists including pirates, goddesses, muses, three Kingkiller Chronicle decks, and many more! 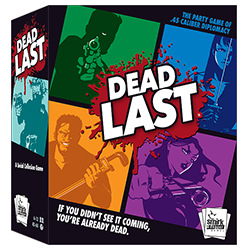 With a short learning curve, 6-12 players will have this game up and running in no time. Don’t let the name fool you, it’s not ominous and you’ll spend the whole game laughing. DEAD LAST is a ‘social collusion’ game where each round, you will conspire and then vote upon whom to kill, in an effort to be the last player standing and collect gold. You MUST vote with the larger group, just to stay alive, so alliances and gaining agreement on who will die is critical. Subtle communication, a glance, a nod, pointing a finger, flashing their targeting card, anything at all is completely legal. But don’t tip off your target – or they will ambush you instead. 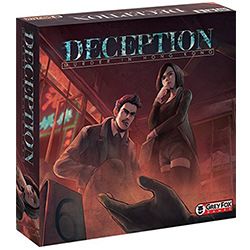 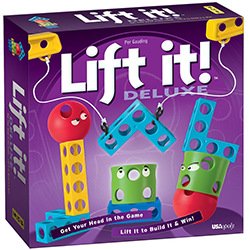 Lift it! Deluxe is the fun family game that challenges players to create structures on the board using the various types of components. Players choose a card to build and (attempt to) make the structure with the Lift It! crane using their hands or their heads. Patience, teamwork and a sense of humor take you far in this game.

Play individually or as teams! The whole family will enjoy this active, playful game of beating the clock. 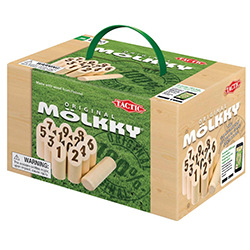 Mölkky is a sturdy and durable outdoor game in which success is based on a combination of chance and throwing accuracy. Easy to play, just arrange the pins, number 1 through 12, in a formation and throw the Molkky skittle pin to try to knock down some pins. To win the game, players try to knock down a total of 50 points worth of pins. Use amended rules for more competitive rounds! Molkky is an easy, go-to game on any day and is enjoyed worldwide for its casual, easy game play, as well as in serious, top tournaments and championship competitions. For two or more players or teams, ages 6 and up. 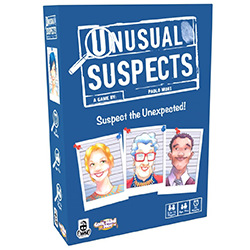 Unusual Suspects is a party game for up to 16 players! One person was the Witness to a crime. They know who the culprit is but can only answer “Yes” or “No” to questions about the suspect. The rest of the team are Detectives trying to make sure the right person gets locked up from a line up of twelve suspects. They will flip Question cards for the Witness to answer, and then do their best to interpret the response. Based on their deductions they’ll eliminate suspects until only the guilty party remains…or they let the perp walk. How well do you know the Witness? How will they respond? Has the culprit ever been to a county fair? Your investigation will have to find out! 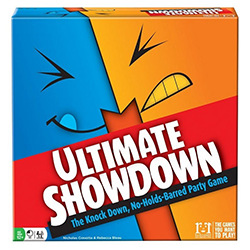 THE KNOCKDOWN, NO-HOLDS-BARRED PARTY GAME that pits famous people and characters in a bracket-tournament battle to decide once and for all — Who will triumph as the Ultimate Victor? Players bet and vote on their choice of famous contenders for the challenge at hand. Predict winners to score points and beat out your fellow players. Who’s the biggest backstabber? Best babysitter? Most likely to lie to their mother? Best road trip companion? Pick the challenges, place your bets, get your picks to win, and BE the Ultimate Victor!

One Night Ultimate Werewolf is a fast game for 3-10 players in which everyone gets a role: One of the dastardly Werewolves, the tricky Troublemaker, the helpful Seer, or one of a dozen different characters, each with a special ability. In the course of a single morning, your village will decide who is a werewolf…because all it takes is lynching one werewolf to win!

Because One Night Ultimate Werewolf is so fast, fun, and engaging, you’ll want to play it again and again, and no two games are ever the same. 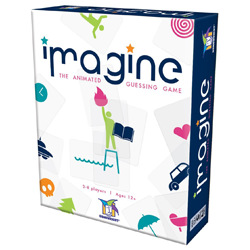 The Animated Guessing Game – Imagine a game that becomes the life of the party! Combine, overlap, and even animate the special transparent cards in this fast guessing free-for-all. Is that icon actually a flag pole? Or is it a golf club, a shark fin, or even an ostrich’s neck? With 61 unique icons and more than a thousand prompts, it’s a game as big as your imagination! 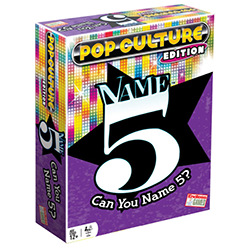 Hey Party People! Can you NAME 5 Superhero Video Games in 30 seconds? 5 Rock Ballads? How about 5 Signature Fast Food Menu Items? This is the ALL Pop Culture Edition of your favorite social game that asks the easy questions you know the answers to! Ready to PARTY! Can you Name 5? For 2 plus players or 2 teams. Ages 12 and up.

Get the party started with these fun games designed to accommodate larger groups. We’ve featured several on the site in the past so look for the tiny

logo on titles that we’ve previously given a full preview. Be sure to keep an eye out for ALL of these items to show up in our 100+ Days of Giveaways.