Quite often I hear people say they don’t like certain genres of games and refuse to play anything they feel falls under that umbrella. It’s unfortunate because games have different designers, developers and publishers that each put their own spin on things. While a particular game mechanic may be utilized, it doesn’t mean that all games of that type are copycats. We’ve demonstrated this idea plenty of times by highlighting the diversity of games with polyomino pieces, roll-and-write titles and even dexterity games. By unilaterally saying, “I won’t play (insert genre here) games”, people may miss out on a great game. Even a colorful game like Hues and Cues is colorblind-friendly, but you wouldn’t know it unless you gave it a try! Hidden-role games are another example of ones that shouldn’t be pigeon-holed. Ultimate Werewolf, 3 Laws of Robotics, Escape from the Aliens in Outer Space, Captain Marvel Secret Skrulls, and Inkognito all have a different take on hidden role and deduction games. Saboteur The Lost Mines Game from AMIGO Games is another we can add to that list. 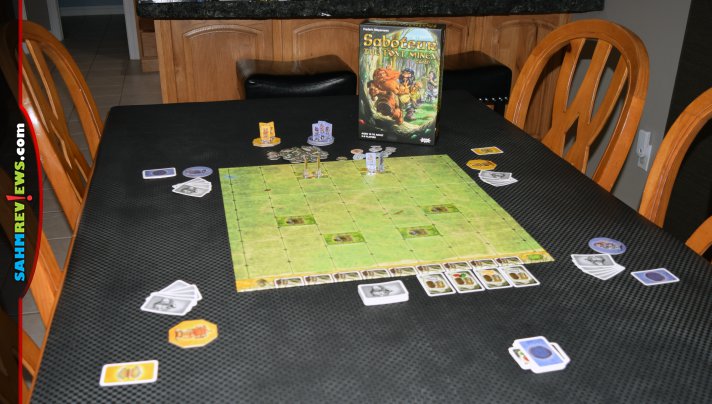 You’ll take on a role of a dwarf from one of two clans who are searching for the lost mines. But this isn’t a team game. Your clan may be comprised of loyal dwarfs, selfish ones and even saboteurs who are in cahoots with the opposing clan. The assortment of characters depends on how many people are playing. As such, it’s important to note that this type is better with a higher player count even though the box says 3-9 people. During setup, you’ll adjust which characters are available then randomly distribute them to all players. Shuffle the path and action cards to form a deck and place it alongside the board. Create general pools of forest, victory point and dragon tokens. Randomize the mine cards and add them face-down to the board. Shuffle the treasures and place the equivalent to the player count face-down next to the board. 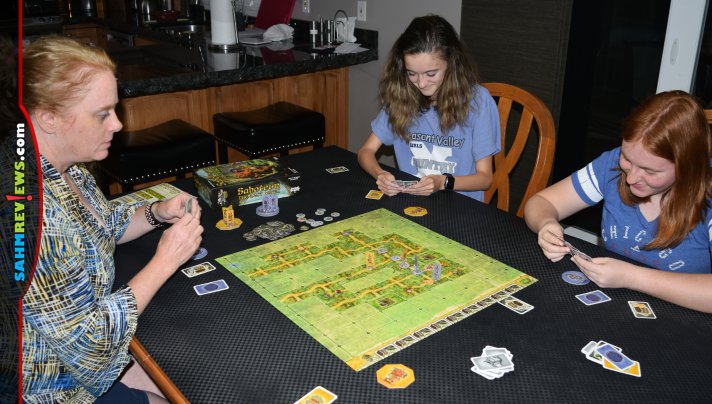 Saboteur The Lost Mines will take place over two rounds, each continuing until either the treasures have been collected or all cards have been played. On your turn, you’ll play or discard, move your dwarf then draw cards. You’ll be attempting to navigate to the mines to collect treasures while avoiding traps, obstacles and even a dragon. 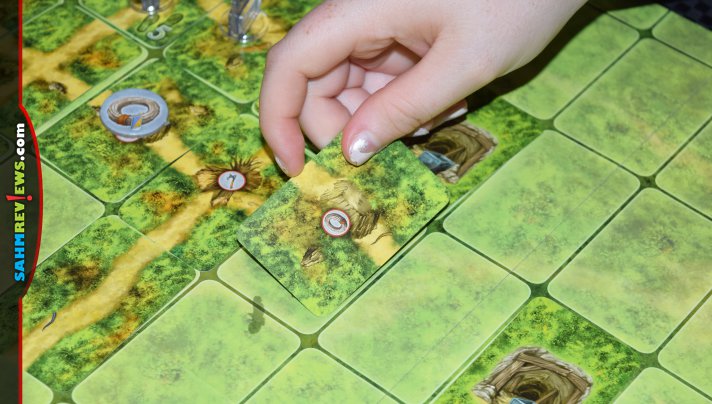 On your turn, you must either place a path card, play an action card or discard one or two cards. When you place a path card, you need to make sure it’s either connected to an existing path or one of the mines. It doesn’t have to be where your dwarf is, but you must make sure the path doesn’t dead-end against another card. 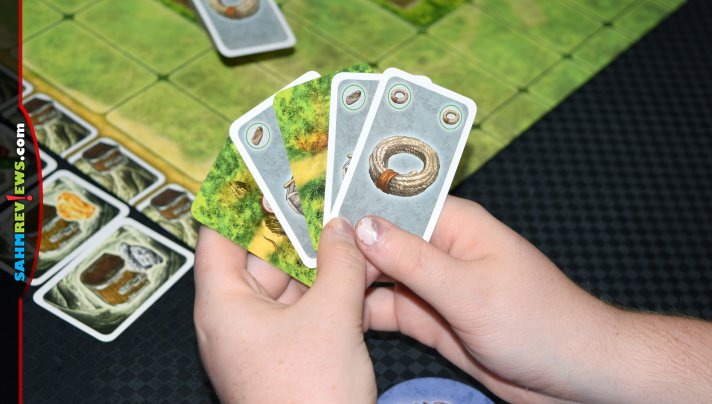 As an alternative to building the pathways, you can opt to play an action card. There are several different that allow you to peek at the mines, discover someone’s true identity, set traps, attract trolls or remove obstacles. If you don’t want to play a card, you must discard one or two cards out of your hand. 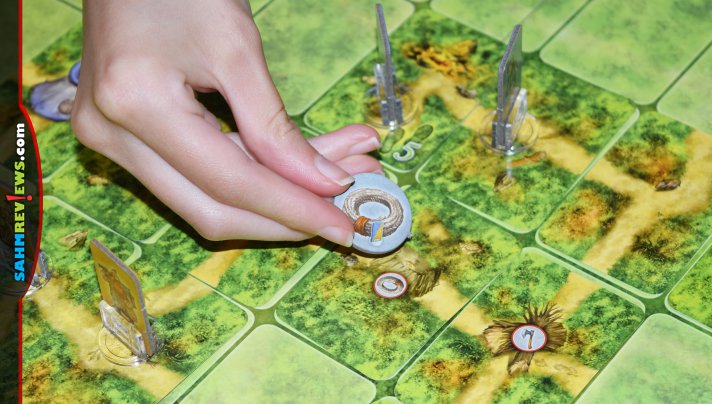 After playing or discarding cards, you may move your dwarf up to three spaces. You cannot land on or cross unresolved obstacles nor can you pass by a troll. If you hit a trap, you’ll lose one card from your hand for the remainder of the round. In the event that you were on a space with a campfire, you can move up to five spaces! 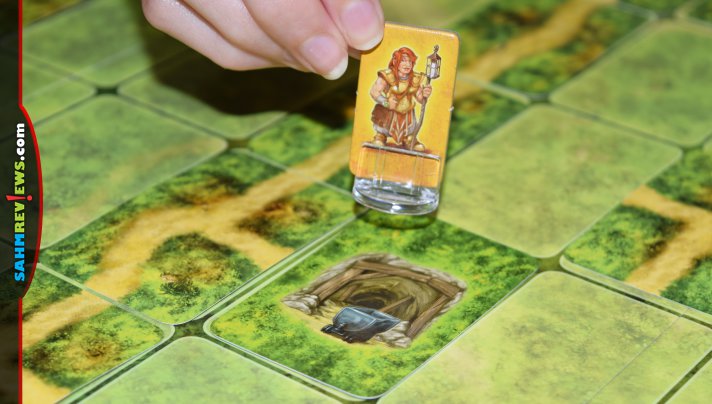 If you reach a mine, you’ll reveal it and take the associated treasure from the stack of treasure cards. If you discover the mine with the dragon then you’ll receive a token for negative two victory points at the end of the round. Once all cards have been played or treasures collected, the round is over and identities revealed and treasures divided accordingly. Selfish dwarves keep all their own treasures, loyal ones and saboteurs from the opposing clan combine and divide among their team. The entire game is reset and a second round played with new identities, treasures and mines. The player with the most victory points after two rounds is the winner. 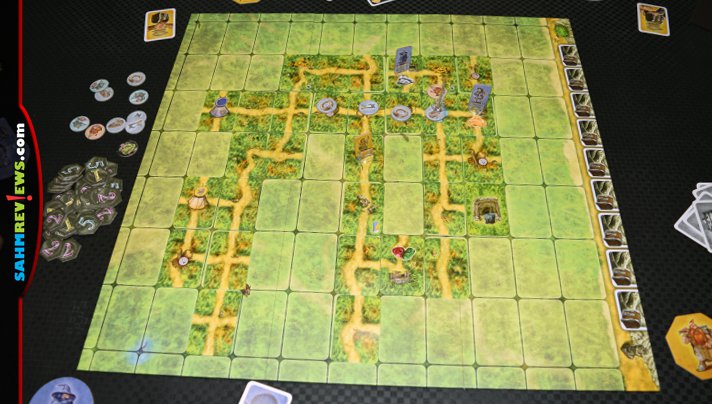 While Saboteur The Lost Mines includes hidden identities, there’s more to the game than just that. It’s a different take on the popular Saboteur line of games and can be played by families who are familiar with tile-laying games. You can find copies on Amazon or check with your local game store. Visit AMIGO Games to see the many other games in their product line and visit them on Facebook for updates on new releases.

What is your favorite hidden identity game?

1 thought on “Saboteur: The Lost Mines Board Game Overview”