Raise your hand if you know someone who has taken up baking and cooking during the pandemic. There have been a couple times that Scott and I left to run errands only to return to the house smelling of freshly baked chocolate chip cookies. The last time the girls were that excited to bake was when they set out to find the best peanut butter cookie mixes. I’m perfectly happy chowing down on all the sweets and homemade veggie dip that the girls have been whipping up, but it’s impacting how well I fit into my wardrobe. And heaven knows that I’m not going to try to go clothes shopping in this mess. So to get my fill of fancy foods, I’ll enjoy thematic board and card games like Food Truck Champion, Kitchen Rush, Rocky Road a la Mode, Menu Masters and Filler. We recently added Bon Appetit! from Strawberry Studio and it’s completely foreign to us since we haven’t ordered off a menu in months! 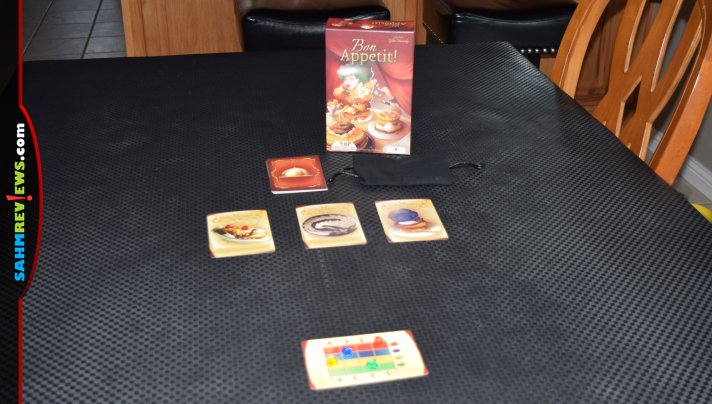 Bon Appetit! is an auction game with only a handful of components. The size of the box makes it look like there is a lot going on, but it consists of 13 dish cards, a gem card, 20 gems and a cloth bag. That’s it. Add one of each color gem to the bag, place the gem card in the center of the table then randomly draw gems and set them on the card on the number in the order they were drawn. Shuffle the menu cards then remove one from that stack and (without revealing what it is) return it to the box. Set the stack on the play area and flip the top three cards to form a menu.

Add the remaining gems to the bag (less in a 2-player game) then each player draws 4 or 5 depending on the player count. As I mentioned, this is an auction game so everyone keeps their gems hidden. You don’t want your rivals to know how much you can afford! 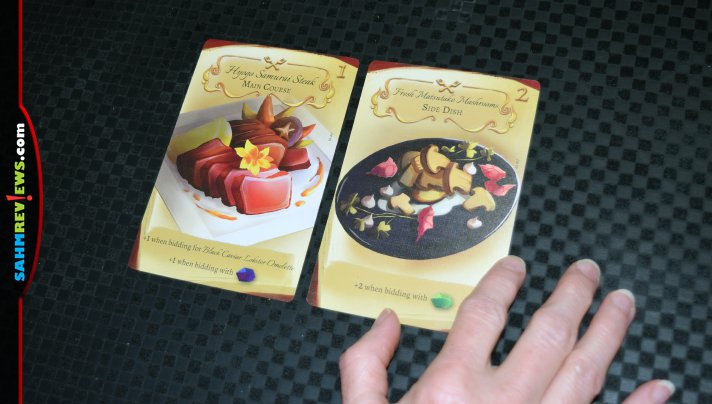 The object of Bon Appetit! is to bid on the 12 dishes and have the most cumulative value after all have been served. The value of each dish is shown on the upper right of each dish card while the bottom shows any bonuses that the card’s owner can take during future bidding. 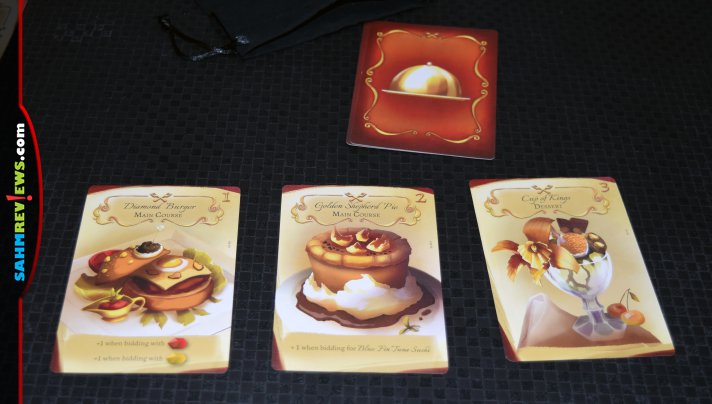 The first card in the menu row is moved to the center and will be the subject of the upcoming bid. The remaining cards in the row are shifted to fill the spot and a new card is revealed. All restaurant-goers will simultaneously use their gems to bid in an attempt to acquire the dish. 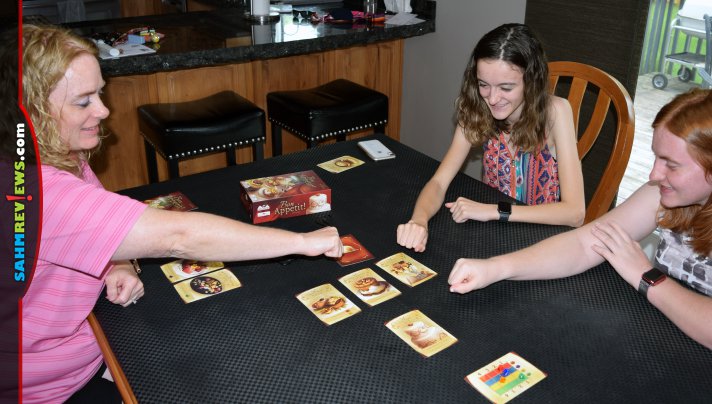 The value of the gems is based on the gem card that was populated during setup. When there is a tie, those players will set their current bid aside and rebid using whatever gems they still have. The player who bid the most will take the card and place it in front of them. Players who did not win the bid will keep their gems.

The value on the gem board is impacted not only by which gems were part of the winning bid, but also by those that were not used. Each color gem that was used will decrease in value by one while each color not used will increase by one. After this is completed, the gems from the winning bid are returned to the bag. Any player who opted to bid zero for this auction will be allowed to take another gem from the bag. The next auction begins and the process continues until all menu items have been purchased by patrons. The person with the most value in cards wins!

The unique ability to bid zero and earn another gem gives players some additional control over their auction options. In addition, the incorporation of special abilities adds an additional layer to the bidding process. Bon Appetit! is a quick filler game for in-between other games or when time is tight. You can find a copy of Bon Appetit on Amazon or check with your local game store about availability. Make a reservation on Facebook to see what else Strawberry Studio is serving up!

Do you enjoy auction games?