With Thanksgiving, Black Friday and Small Business Saturday in the rearview mirror and Cyber Monday upon us, it’s like the proverbial starting line for the sprint to the finish. Ready, Set, GO SHOPPING! But with everyone purchasing via websites and curbside pickup, it’s harder to find the right items. Over the past two weeks, we’ve shared several guides filled with ideas including Party Games, Card & Dice Games, Games for Teens and Adults, Home & Electronics and Toys and Games for Younger Kids. Of course, we kicked these guides off with a guide to giving family games this holiday season. As you may recall, we labeled it as “Part 1” because there are simply too many family game suggestions to fit all in one guide. Here we are with the follow-up to that!

In the same format as our prior guides, you can find the item, brand, description and a link to purchase the item on Amazon, Walmart, Target or direct. If you see our

logo behind the brand, click to get our personal experience with the product. These are more than just games, they are an opportunity to unplug and reconnect offline. So consider that while debating whom to purchase these for! 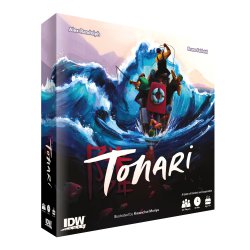 The small island of Kuchinoshima has been hit by a terrible storm, leaving the village with only a single fishing boat. Each hoping to prove themselves the village’s best fisherman, 2-4 players take turns moving the boat marker around the island, collecting any fish tiles they land upon. At the end of the day, the player with the best haul wins, but there’s a twist – each player’s score is added to their left neighbor’s score before determining the winner! 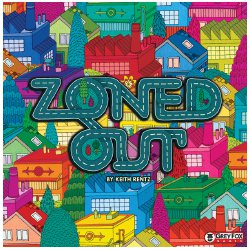 n Zoned Out, you take on the role of a developer trying to build a thriving metropolis from the ground up. To win, players will need to use the right combination of residential, commercial and industrial development as well as downtown construction to gain the most points.

Lift Off! Get Me off This Planet! 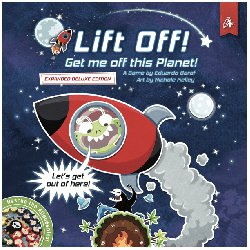 It’s been a fun existence, but someone tripped over a coolant cord in the core and the planet you’ve called home for eons is going to explode. This is a Expanded Deluxe Edition of the PFG Classic that now supports 1-6 players, new lift off & exit points, and a variety of other improvements and expansions to the original family game. 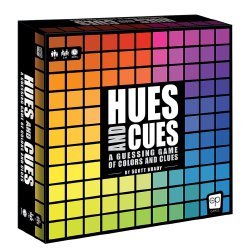 Escape the Room: The Cursed Dollhouse 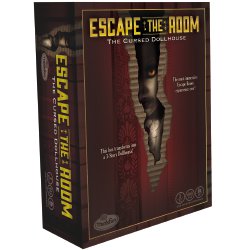 In Escape the Room: The Cursed Dollhouse, players explore a mysterious three-dimensional dollhouse, solving puzzles in search of a way to escape. Five rooms, each containing objects to investigate and multiple puzzles to solve, will keep even the most skilled escape room players engaged through two hours of play. 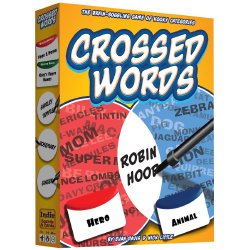 The brain-bending party game of crazy categories and wackier words! At the start of the game, the board is populated with three column categories and three-row categories. This forms a 3 x 3 grid. Players will try to come up with answers that fit both of the categories that form one of the nine intersections on the board. Players have nine discs to write answers on. Players fill out answers as quickly as they can and place those discs facedown on the board. Players score points for each intersection where they have placed an answer no one else
placed.

None of a Kind 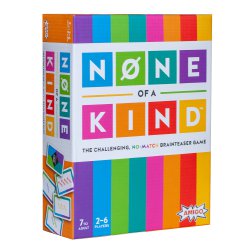 This brainteaser game is so simple to learn . . . and so challenging to play, as players race to find cards that don’t match. 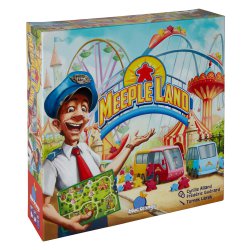 Meeple Land is an immersive resource management and tile placement strategy game. Players build their own amusement park by buying rides, offering services, buying advertising, and welcoming as many visitors as possible! 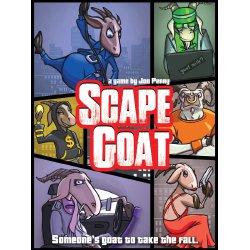 You’re part of an internationally renowned group of billy goat criminal masterminds, and you’ve just pulled off your greatest caper yet. Stealing the coveted golden hoof right out of the most secure bank vault in Barn City. Someone’s got to take the fall for it, just make sure it’s not you. In Scape Goat, everyone at the table is trying to pin a crime on the same player, all while that player has no idea they’re taking the fall. The twist? That player could be anyone! Trade cards, make deductions, and figure out if you’re the scapegoat before the cops come after you! 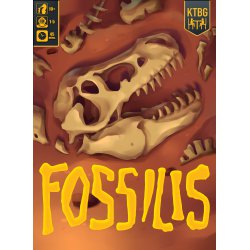 Explore the unique 3D gameboard; unearth incredible dinosaur fossils as your paleontologist rivals shift the terrain around you in this amazing game for 1-5 players. 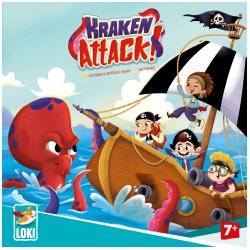 Beware! The tentacles of a terrible Kraken just burst out of the waves! Hurry up, everyone on deck: get your swords, guns, and cannons! Kraken Attack is a smart cooperative game: use your pirate skills, repair the damages and choose the best weapons to save your ship! 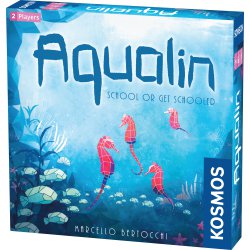 Aqualin is a two-player strategy game that is easy to learn but challenging to master. During the game, each player attempts to group together as many matching tiles as possible, and to form the most groups. One player works to create groups of the same color, while the other makes groups of the same type of sea creature. The bigger the group is, the more points it’s worth. At the end of the game, whoever has the most points wins. 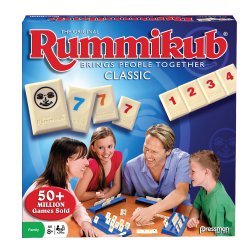 With more than 55 million units sold, Rummikub is one of the world’s best-selling and most-played games! It’s really no surprise that Rummikub is so popular – it has all the elements that make a great game: it’s easy to learn and fast moving, it’s different every time it’s played, it combines luck and strategy, and it changes quickly so every player has a chance to win until the very end. Players take turns placing numbered tiles in runs (consecutive numbers of the same color) and groups (three or more of the same number in different colors), rummy style. It’s easy to learn, but packed with strategy

In Drone Home™, players launch aliens down the ramps, racing to land inside the drone so they can fly home! Watch out—there’s a delay once you make it in, so others can knock you out! If you stay in and your alien escapes when the drone lifts off, you’re one step closer to winning! Get rid of all your aliens first to win! It’s fast-paced fun for the whole family, and it’s the first game to include a real, flying drone! Requires batteries, not included. 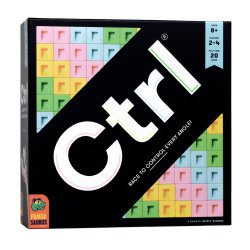 Players compete on an abstract 3-dimensional battlefield. The goal is simple: control the largest area at the end of the game! But to do that, you’ll need to solve a thinky 3D puzzle, placing your blocks along 3D paths that climb up and down surfaces and over other players’ blocks. Build on top of your opponents to take control of their areas, and plant your flag to protect areas where you want to build – but try not to get blocked yourself! 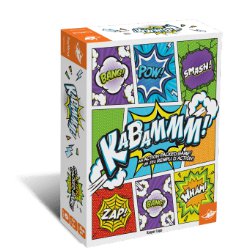 Elevate your reflexes and visual perception to superhero level when playing Kabammm! 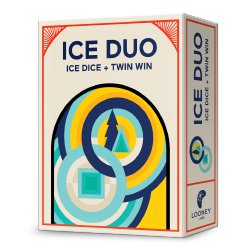 Ice Duo is actually two complete games in one box! Ice Dice is a press-your-luck game. Roll the dice to see what pyramid you get, then decide if you want to risk it by rolling again! Twin Win is a quick and easy strategy game featuring a pair of secret goals and a small amount of bluffing. This set is one of four travel-sized Looney Pyramid games released this holiday season. 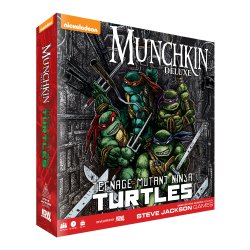 Using the much beloved and extremely popular Munchkin game rules by Steve Jackson Games, Munchkin Teenage Mutant Ninja Turtles blends the humor and gameplay of Munchkin with the enemies and “team-up” themes of the iconic Teenage Mutant Ninja Turtles comics. In Munchkin TMNT the Turtles and their pals are in a race to the Level 10 Pizza Parlor as the first one there eats for free! It’s all good dudes, except Shredder and the Foot Clan are out to spoil the pizza party!

We still have a few lists yet to come so stay tuned for educational gift ideas in our upcoming STEM gift guide, stocking stuffers and even a guide devoted to Pop Culture! Don’t forget to check out the many giveaways we have running to coincide with these suggestions! So many great products in our guides that you can purchase for others and items to win for yourself through our giveaways! 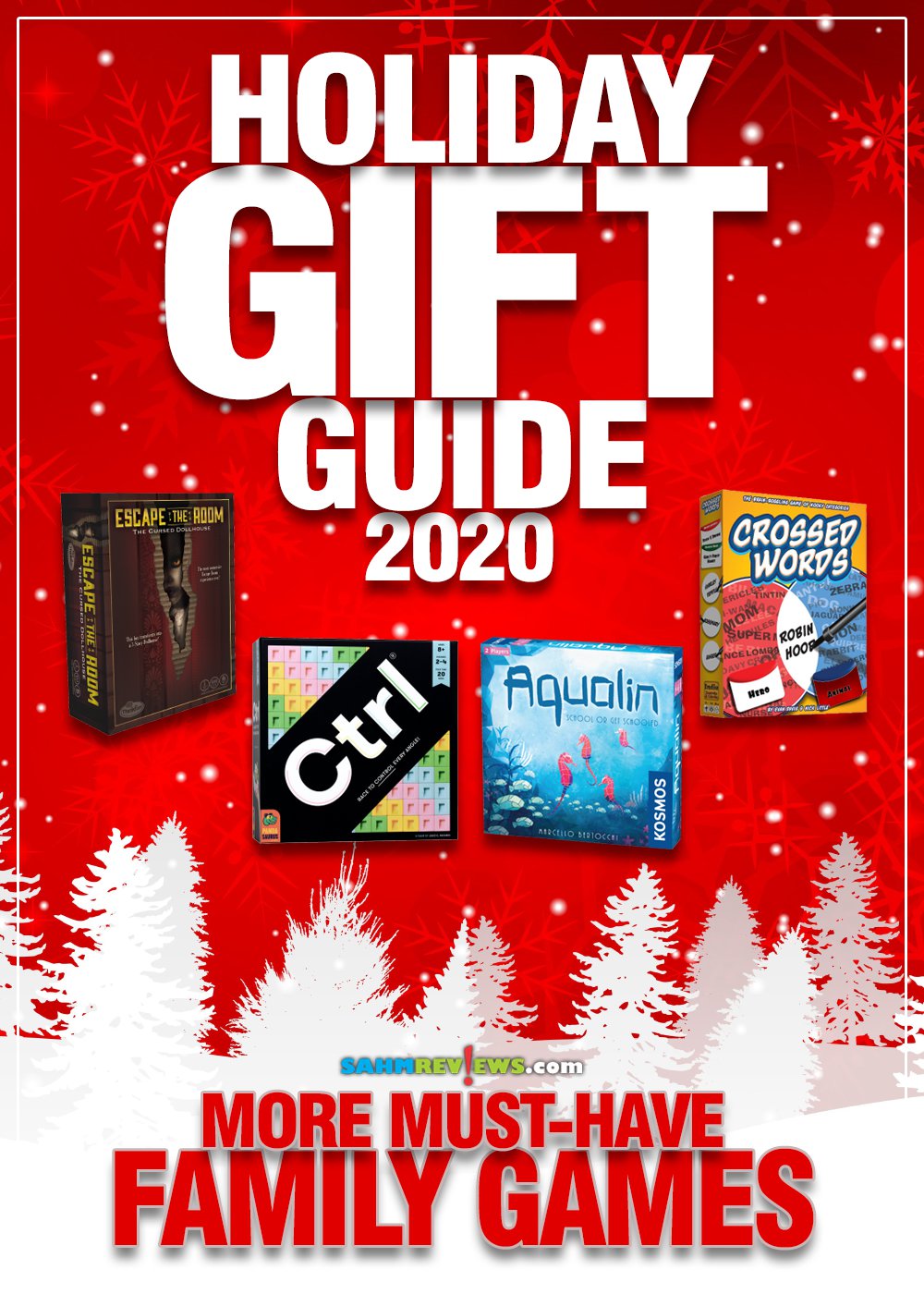