A while back, in his Honshu card game overview, Scott shared thoughts on “don’t judge a book by its cover” with respect to board games. He specifically mentioned the similarities between it and Samurai Gardener… or lack thereof would be more appropriate. They looked the same, but that’s about it. The other day, we grabbed Hokkaido off the shelf and had a sense of Déjà vu. I immediately recalled both Honshu and Samurai Gardener then proceeded to go back to those overviews to re-read what we had to say about them. I had learned my lesson about making comparisons. Well, sort of. The resemblance to Honshu was uncanny, but as soon as I started reading the instructions for Hokkaido, it all made sense. 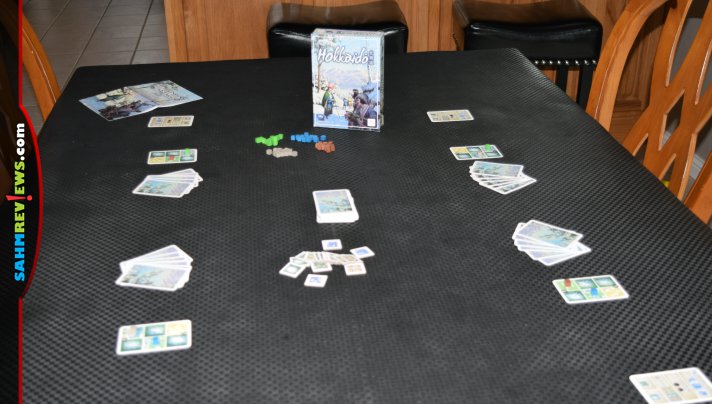 “After establishing themselves in Honshu…” is how the instructions began. Hokkaido by Renegade Game Studios is a second installment in the Honshu series. Rest assured that some new rules and mechanics have been implemented to ensure that Hokkaido isn’t merely a reskin of its predecessor. To start the game, decide if you’re playing the A or B side of the starter cards. Give everyone a reference card along with a random starting province that is flipped to the appropriate A/B side. Shuffle the deck of map cards and deal six to each player. Place the remaining in the center of the table along with a general pool of resources and terraforming tiles. If you’re playing with goal cards, distribute those as well. 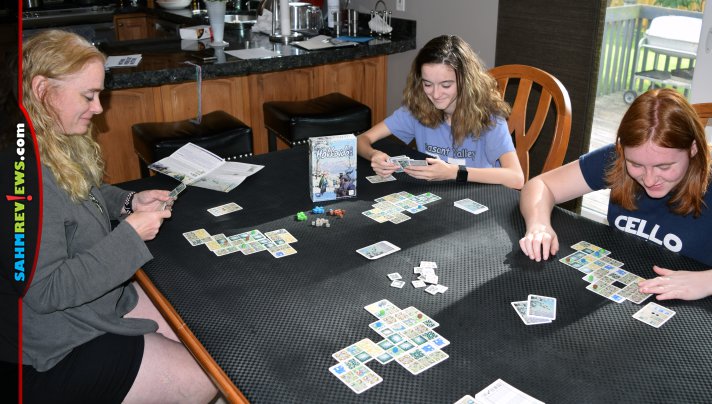 Hokkaido is played over twelve rounds, each consisting of a Drafting Phase and a Map Phase. The goal is to earn the most points by filling factories, building cities, extending your mountain range and incorporating lakes and forests. Each time you draft a card, you’ll cover at least one square on an existing card, but there are some restrictions that I’ll explain in a minute. As an alternative to placing on top, you may slide a new card underneath an existing one as long as you follow the same placement guidelines. 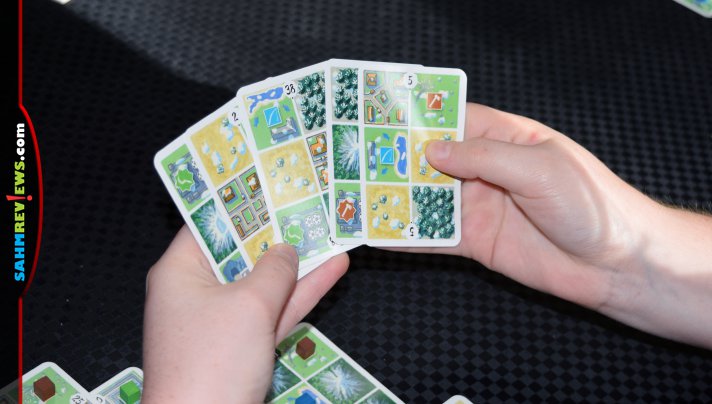 Review the six cards in your hand and decide which one you would like to incorporate into your province. You’ll pass the remaining to the next person to use in the following round. That’s all there is to the Draft Phase. For the Map Phase, you’ll need to evaluate how you want to grow your area. Be careful which cards you select because you are only allowed to have one continuous mountain range which divides your province into two parts. To make things more complicated, you may never cover a space that includes a mountain. Likewise, lakes cannot be built on either. As much as I should refrain from making comparisons (you know, lessons learned), this feels like a light, version of Between Two Castles of Mad King Ludwig sans the semi-cooperative nature of that game. 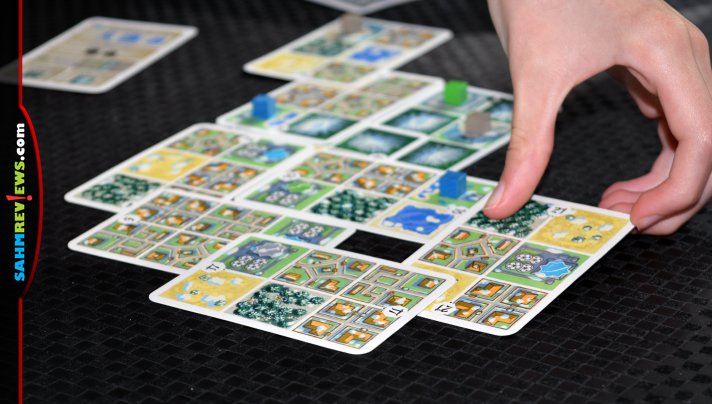 If you happen to build a space with a resource, you can save those up and cash them in to transform desert spaces into something more useful. I’ve lived in the desert and it’s not very pretty nor very resourceful. I wholeheartedly encourage terraforming these dry spaces, but that has nothing to do with strategy. 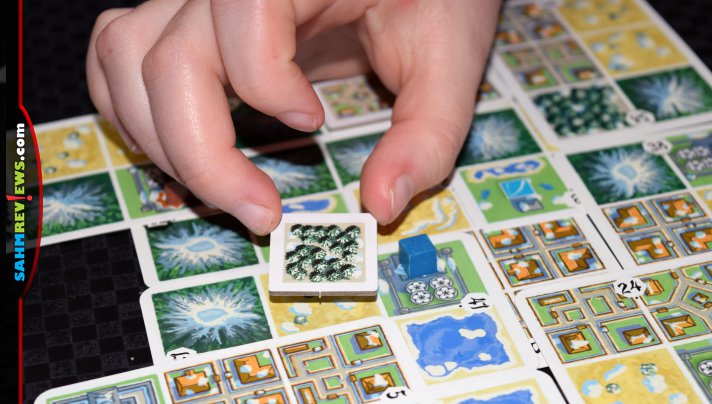 In order to terraform a desert, you cash in two resources from your existing production spaces. The type of property you can convert to depends on what you’ve produced. Two blue resources allows you to create a lake, two brown a town, two green earns you a forest and two grey a mountain. If you choose not to spend the resources, make sure you find a card with a factory that matches the resource type so you can earn points for them! 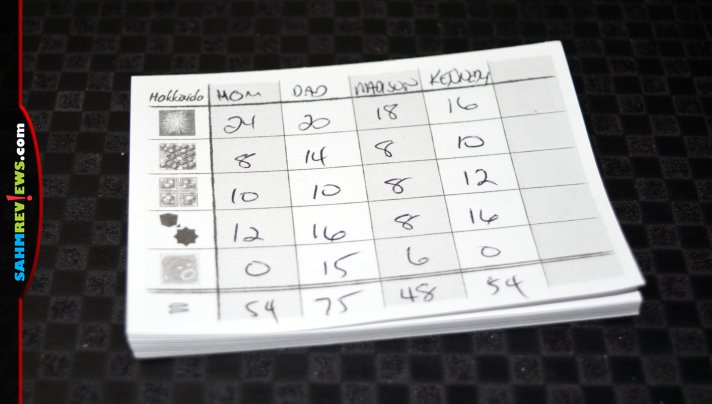 You’ll select your specific card and pass the rest of your hand to the person next to you. For the first six rounds, you pass clockwise. After those cards are built, everyone draws six more cards each and those will be passed counter-clockwise. After all twelve rounds have been resolved, scoring takes place. You’ll earn two victory points per space in your mountain range and two for each forest space. Lakes score three for each square in a group, excluding the first one. You’ll earn points for factories that have resources matching production squares. For towns, you’ll look at the two sides of your mountain range and determine the largest city on each side. You’ll score two victory points for each square in the smaller of those two.

Like the first game in the series, Hokkaido is a compact game that’s family-friendly and quick to play. You can find out if there are more in the works from Renegade Game Studios’ by visiting their website or finding them on Facebook and Twitter. Ask your local game store about copies or have one shipped from Amazon.

Do you enjoy playing games that are part of a series?