When I was in 5th or 6th grade, my family was stationed in West Germany. My brother and I went to an American school in Worms, but we lived in a regular house. “On the economy” was the term for those of us that didn’t have to live on base in barracks. The U.S. no longer has a military presence in that area. The base now houses various professional businesses and the school and housing have also been converted into other uses. I’m a member of a number of Facebook groups dedicated to those who either served in the area or went to school there. Members of the Worms American Elementary School Alumni group regularly post updated photos of the area when they go back to visit.

One of the things that the student got to experience was field trips. Not just day trips – our field trips were for a full week, usually to other countries! Twice a year we would travel to various areas of Western Europe (this was before the fall of the wall) with our full grade and a handful of chaperones. One year we spent a couple days in the Black Forest for some skiing on our way to Switzerland. Don’t be jealous, but yes, it was paid for by your parents’ tax dollars!

I often recall that trip and hope to be able to return someday. I was again reminded of it when I came across Green Couch Games‘ new game, Into the Black Forest. This inexpensive trick-taking card game for 2-4 players is themed with typical creatures you’ll find in the Black Forest during the warmer months.

Normally in a trick-taking game you are just trying to have played the highest valued card or a card that doesn’t affect the pot at all, forcing another player to win the hand. In Into the Black Forest, not only will you be playing a card each turn, where you play it will matter as much as the value of the card played.

To set up the game, give each player a matching colored set of twelve cards. These cards depict one of four animals, a value printed in the upper left corner, a suit directly underneath the value and an icon matching the color on the backs of the cards. There’s a separate deck made up of Encounter Cards which is also shuffled and set in the center of the play area. Determine the first player and you’re ready to begin! 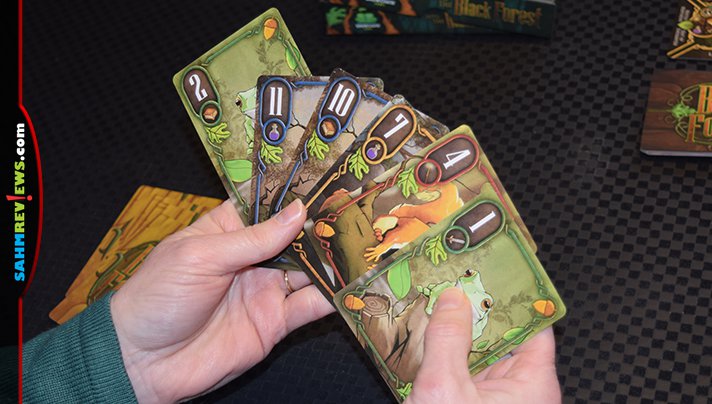 Into the Black Forest is played over rounds, with each round covering three of the Encounter Cards. To start, each player will draw six of their Animal Cards (8 for a 2-player game) into their hand. If this isn’t the first round, discard down to 6/8 cards after drawing. Reveal three of the Encounter cards and lay them face-up next to the draw deck. The first Encounter card is moved to the middle of the play area and will be the first one resolved. 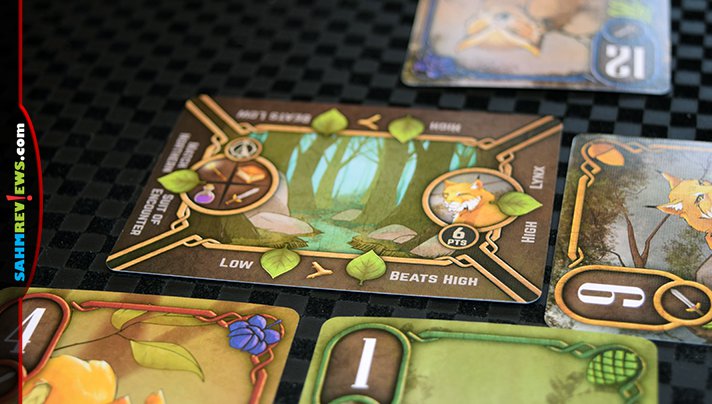 Each person in clockwise order will play any card from their hand to one of the available spaces on the sides of the current Encounter card. Each side of the card lists a unique condition that will be scored once the card is full. A card is considered complete when the top, bottom and left sides are filled with animal cards. The right side is optional! Once full, score each side of the card and move the player markers on the score board accordingly. Whoever placed the last card gives the start player marker to the next person in order to begin the next Encounter card or round. Any played cards that scored are discarded from the round and players collect their cards that did not score points and add them back to their hand. The next Encounter card is moved to the center of the table and another trick is played! 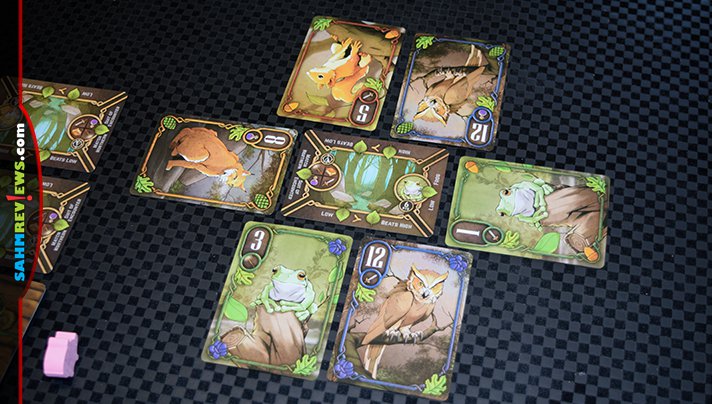 The Encounter cards feature different scoring options and you are encouraged to check out the upcoming examples to plan your play strategy. You will be asked to match the suit of a card on another part of the card, have the lowest or highest value card on a side or have the lowest/highest card of a particular animal! You’ll receive points equal to either your winning card or your opponent’s losing card, depending upon the rules shown on the Encounter card. 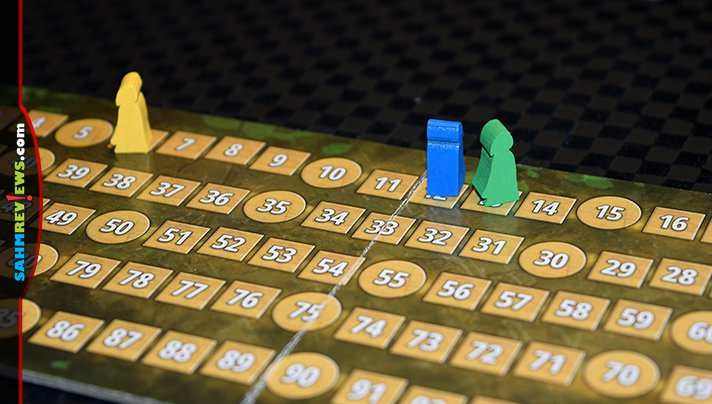 After playing and resolving all three Encounter cards, a new round begins with three new encounters and everyone drawing their remaining cards into their hands (and discarding down to their hand size of six or eight). At then end of that round, the player with the most points as shown on the score board is the winner of Into the Black Forest!

While advertised to play in around 30 minutes, we think you’ll easily be able to finish an entire game and get started on a second in that time frame. Pick up your copy on Amazon or ask for it at your favorite local game store. You probably already know Green Couch Games for their past hits like Filler, Ladder 29 or Rocky Road a la Mode. Find out what they’ll be releasing next by following them on Facebook or Twitter!

Have you ever visited the Black Forest?