There’s a couple our age we’ve been playing board games with for well over five years. They can always be counted on having some of the best titles in their game night bag. A couple years ago they pulled out a card game we hadn’t seen before. It was a copy of No Thanks! by Z-Man Games.

We hadn’t played anything like it before and thoroughly enjoyed it. I considered picking up a copy myself on Amazon for under $13, but eventually decided I didn’t need to since I could play theirs at any time. It’s a good thing I held out because during a recent trip to Iowa City we discovered an unplayed example at Stuff Etc., a consignment thrift store. With an asking price of under $2, it was a no-brainer purchase! 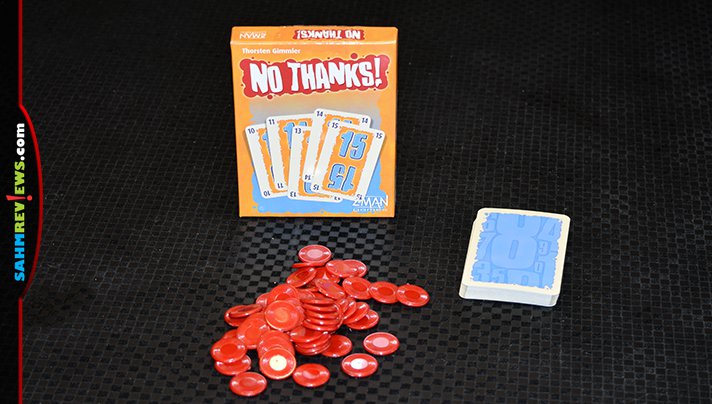 No Thanks! is a 20-minute card game where three to five players are bidding on cards they want to win. Well, technically they’re paying a fee to NOT take a card they don’t want. Trust me, it’ll make perfect sense in a couple minutes.

Shuffle the deck of 33 cards numbered 3-35, count out 24 cards into a face-down pile and set them in the center of the playing area. The other nine cards are returned to the box and will not be used. Each person begins the game with 11 playing chips (tiny poker chips). Determine a start player and begin a game of No Thanks! 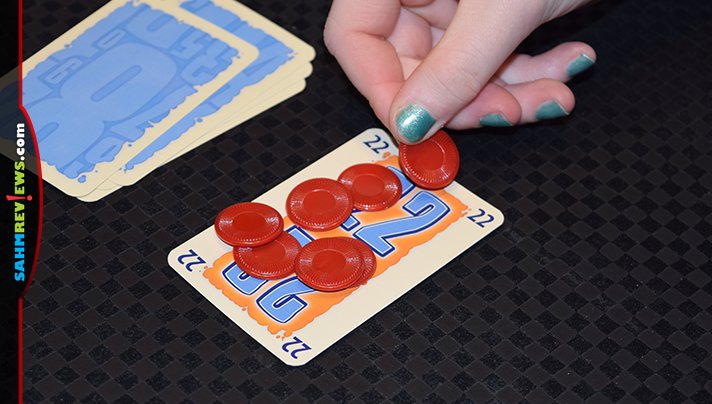 The first player turns over the top card of the deck and places it next to the pile. That player then must decide whether or not to take the card and put it in front of them or to decline it and pay one of their playing chips as a fee. That token is placed next to the card.

If the card was passed on, the next player in clockwise order must make the same decision. Either take the card (and the token) or pay one of their own tokens to pass on the card. Now the pool is two tokens and the next player will again make the same decision. This continues until either one person elects to take the card and tokens or a player has to take it because they have no more chips to pay. 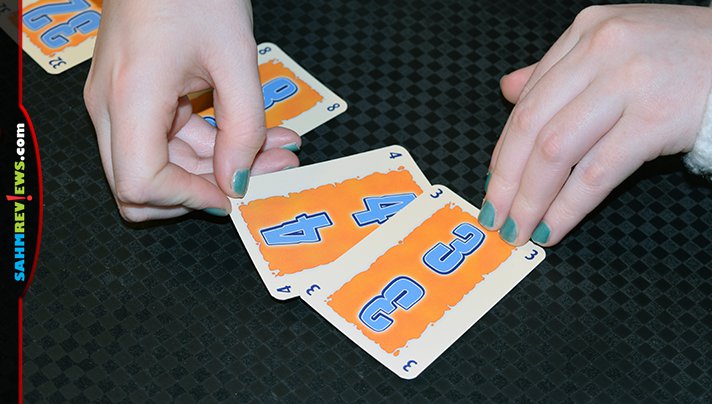 When deciding on which cards to take and which to pass on, knowing how the scoring happens at the end of the game is desired. Each card which a player has in front of them counts as points according the number shown on the card. However, if you are able to collect perfect sequences of any length, only the lowest valued card in the sequence scores points. For instance, if you have 12, 13, 14, 16 in front of you, you will score 28 points (the 12 is the beginning of a sequence, but the 16 isn’t connected to the group since the 15 is missing – it scores also). 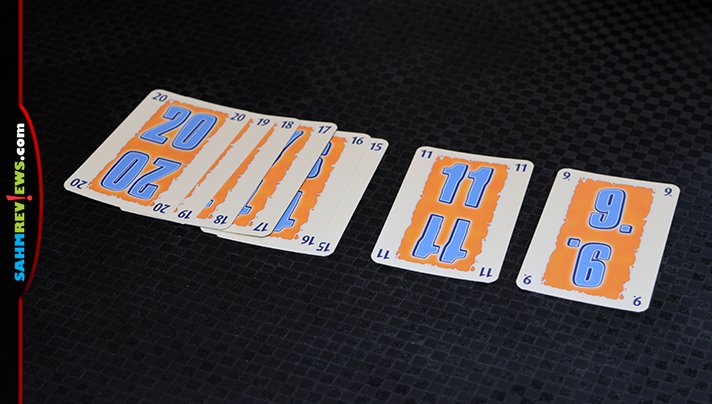 Once all cards from the deck have been drawn and awarded, the player with the LOWEST total score wins No Thanks! Any playing chips in your possession are worth -1 point each, so don’t forget to subtract them from your score! With nine cards being buried at the beginning of the game, you never know what number are left in the deck and whether or not you’ll be able to merge yours into a larger sequence!

No Thanks! is a perfect card game to introduce to new players since it is very easy to learn, yet requires a lot of strategy to be successful. As I previously mentioned, pick one up on Amazon or ask for it from your favorite game store. It is no longer offered by Z-Man Games, but instead has new, colorful artwork and is published by AMIGO!

3 thoughts on “Thrift Treasure: No Thanks! Card Game”