If we mention the name Mattel, what do you think of? Is it the ever-current line of Barbie dolls? Maybe you’re a fan of collecting Hot Wheels. Or you have a daughter that is a huge fan of American Girl, Monster High or Ever After High. Whatever category you fall into, you’ve already been exposed to at least one product in the broad line Mattel has produced since their founding in 1945.

When one thinks of mass-market games, names like Hasbro and Milton Bradley are among the first to come to mind. What most don’t realize is that Mattel has also been involved in the board game market for many years. In fact, many of the games you currently have in your collection are published by Mattel! Ever played Apples to Apples? How about UNO? Maybe Blockus? All are evergreen Mattel titles.

I have to admit, one place I didn’t expect to see Mattel was at the annual Gen Con gaming convention in Indianapolis. Gen Con is usually relegated for serious game players and the companies that cater to that market. These are games you typically cannot find at Walmart or Target (although that is changing) and have a much lower production run than the 10’s of thousands produced for a mass-market offering. Fortunately gamers aren’t too discriminating – they like all types of games!

Among their classic titles, Mattel was featuring a number of new card games all at a great price point of around $10 each. Three of them stood out to us, enough so to bring home copies to try out.

UNO Super Mario is an updated version of the classic game of UNO. The overall game play is still exactly the same – each player is trying to rid their hand of all of their cards before anyone else does. To do so they simply play a card to the discard pile that matches either the color, number or symbol of the previously-played card. 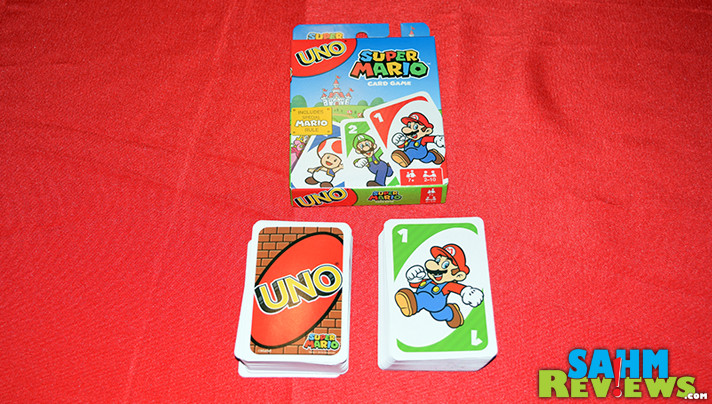 Colors and numbers are found on regular cards, while symbols represent the standard UNO action cards (draw two, skip, reverse, etc.). If you are unable to make a match, you must draw a new one from the deck and either play it immediately (if possible) or pass your turn to the next player. 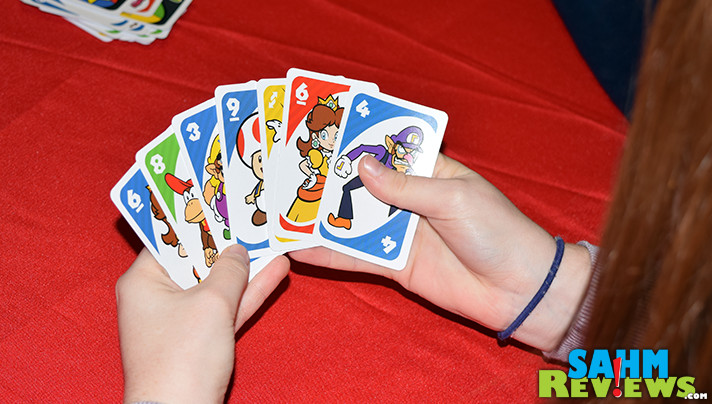 This Super Mario version of UNO includes a couple extra things not seen in a standard UNO deck. First, there are customizable Wild cards that you fill in with a pencil, inserting a house rule into your game. The second special card is the Mario-themed Super Star Card.

Just as in the video game, Mario grabs a Super Star and temporarily becomes invincible. In UNO Super Mario, playing this card bounces the action just played on you (Draw +2/+4) back onto the person who just played it, forcing them to draw! This card is also considered wild, so you choose the color that resumes play. 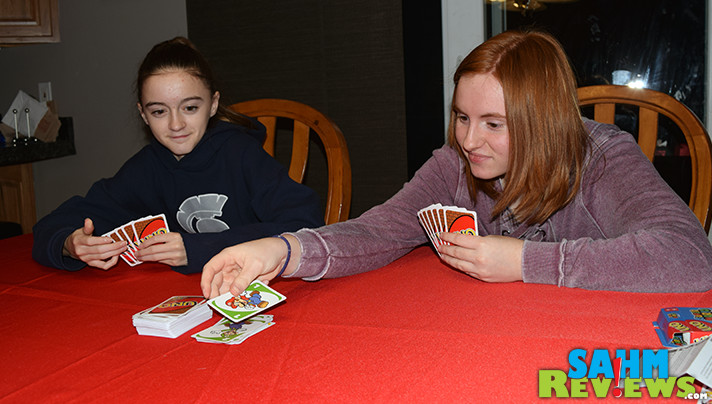 If you have a Mario fanatic in the house (and who doesn’t?!), then this variation of UNO should be the one you want to jump for. Copies are readily available on Amazon for Prime delivery!

Snappy Dressers is unique in that with one deck of cards you have everything you need to play ten different games! The 52 included cards don’t have numbers or suits, but instead have snappily-dressed animals of all types. Each caricature is made up of eight different elements – hat, glasses, animal, scarf, gift, top, bottoms and shoes. Noticing these subtle differences are what you’ll need to do in almost every game described in the rulebook. 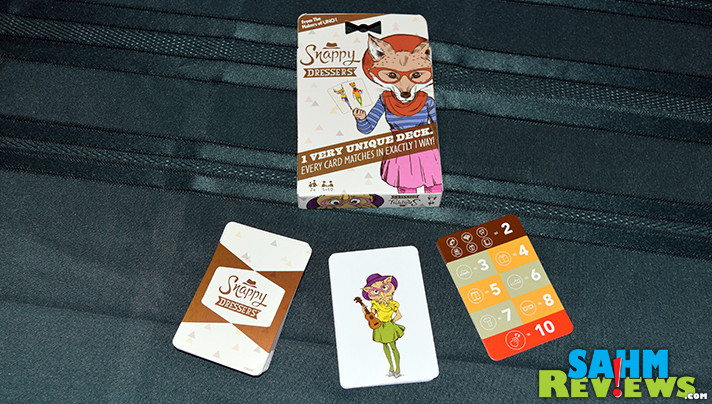 The first game is appropriately named “Snappy Dressers” and is also similar to UNO in that you are trying to rid you hand of all cards. But there are no turns to be taken as everyone acts at the same time and as fast as possible! One card is dealt to the center, with the rest dealt out evenly to all players. 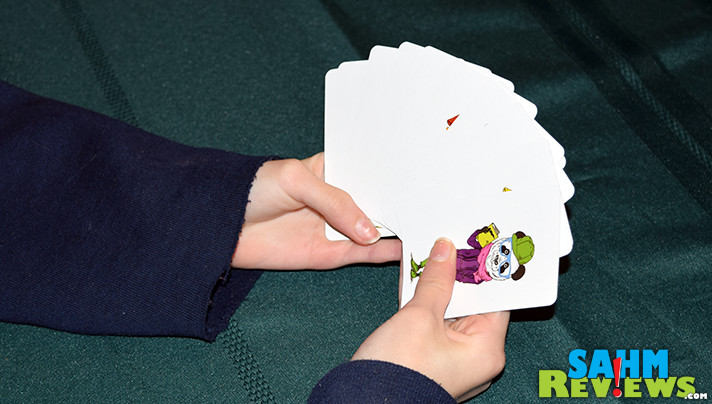 On a count of three all players turn their stack over and race to match either the animal, gift or colored clothing to the top card. When a new card is matched, it then becomes the one that must be matched. The first player to match all of their cards wins! 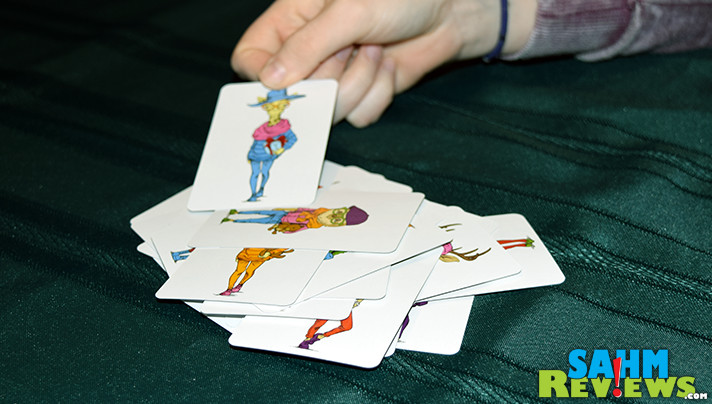 Other games challenge you to build a hand of six animals bearing different gifts, build three sets of four cards that have a common match or play solo and try to create a 3 x 3 grid that has one matching item in every direction. With ten games included, it’s unlikely that you’ll run out of games to play – all in one box! 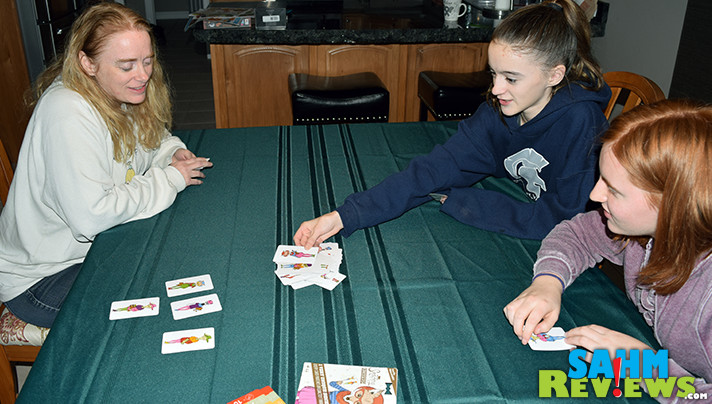 Snappy Dressers is very inexpensive on Amazon right now, coming in at a net price of less than 70 cents per game!

BOLD is another matching game, but this time a very interesting take on a classic memory-matching game. The cards have four variable items on them – a container type, container size, container color and background. From the 81-card deck, a 4 x 5 grid of cards are dealt out face-down to the center of the play area. 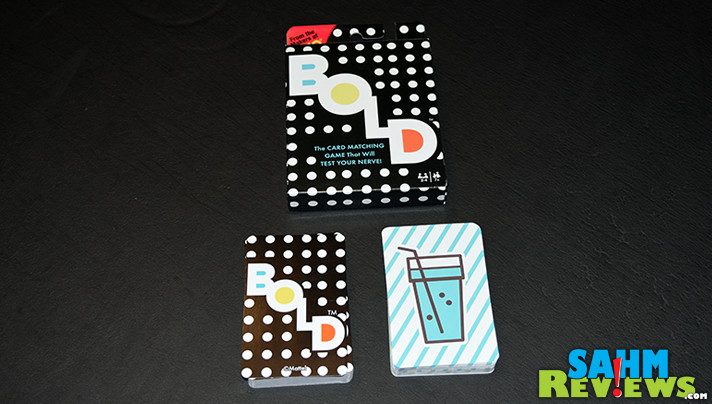 On your turn you will turn over two cards, looking for a match. You must match at least one of the variables or your turn ends by turning the cards back over and receiving no score. If you successfully match at least one item on both cards, you may elect to stop your turn and score, or continue and try to exponentially increase your total. 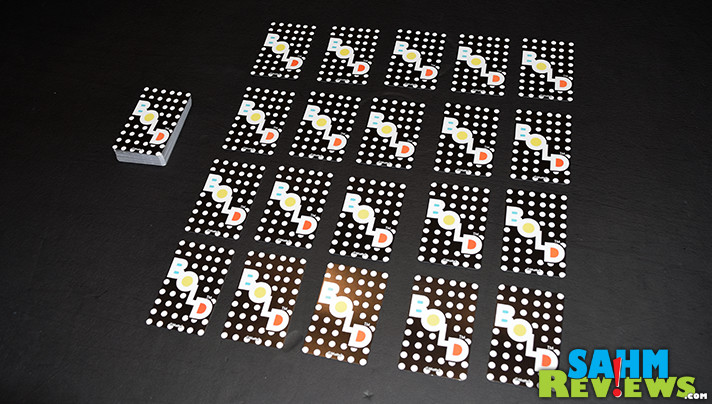 Attempting an additional card comes with stricter requirements. The card you turn over next must now match BOTH of your first cards. So if you matched the container color on the first part of your turn, this new card must have the exact same container color on it. Again if successful, you may stop or continue drawing to try to find another match. As you can see, each subsequent card becomes increasingly harder to match with the prior ones. 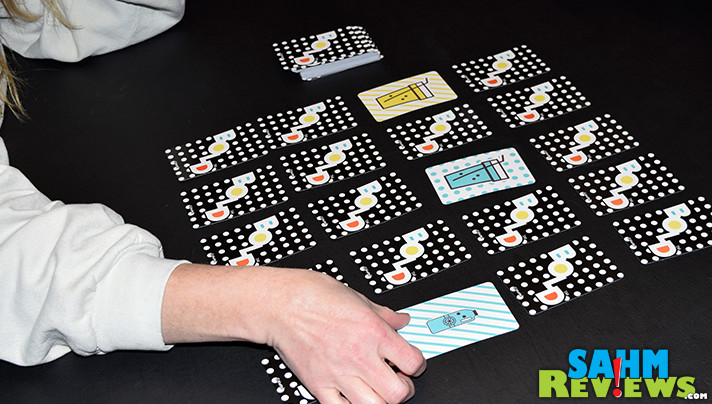 When you decide to stop drawing, you’ll receive points equal to the number of successfully matched cards times itself. Thus, two matched is worth four point. Three match totals nine points. And so on. The matched cards are removed and new ones are dealt from the deck. The game ends when the grid can no longer be refilled completely and the player with the highest point total wins BOLD! 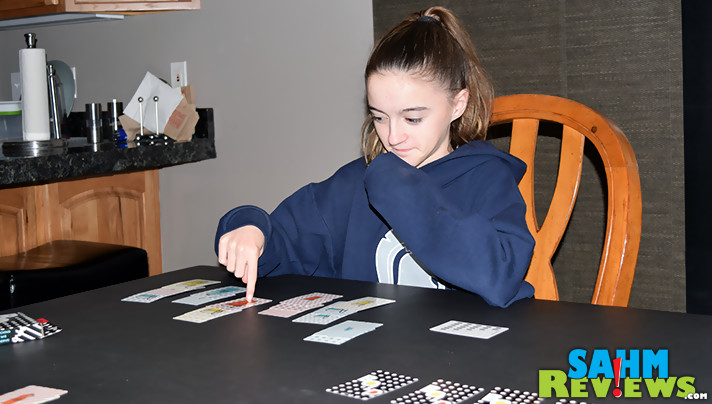 Also on Amazon for under $10, BOLD is a good choice if you have a youngster progressing after mastering Memory. The push-your-luck feature is one that will have them thinking about their choices and whether the odds are in their favor!

Next time you’re in the market for an inexpensive card game as a gift for a friend, family member or even yourself, don’t forget to check out Mattel’s current offerings! You can find all of their current games on their website or by following them on Facebook and Twitter for up-to-date information on new releases!

What is your favorite Mattel toy or game?