Time and again I hear parents complaining about how lazy kids are today. No, you don’t see them outside playing like we used to. I mean, really, why would they want to Kick the Can when they could be watching movies on the garage door? Who is to say that our generation wouldn’t have made the same choices? After all, we dropped coins in arcade games until we ran out of time or quarters, whichever came first.

Video games, television, tablets and phones are all examples of how different things are now from then. Kids (and adults for that matter) gravitate toward these varied types of electronics because that’s simply the way life is.

Technology gets a bad rap in that sense. What people don’t stop to think about is how many advantages kids have now because they have electronics rather than in spite of them. I remember learning basic programming around 6th grade and thought it was amazing. Today, kids can learn how to animate with educational opportunities such as Pixar in a Box. My generation associated stem with either plants or tires. This generation is blessed with having those same “toys” that parents complain about actually be tools in the right settings. When I was young, I learned how to crochet, embroider, sew and cross stitch. Please tell me I’m not the only person who thought latch hook was a great use of time. Today, kids have crafts of an entirely different nature: crafts integrated with technology.

We recently discovered a company who has upped the game in crafting. Teknikio offers STEM craft kits with themes that including technology to allow the completed craft to do something. Their origami set is advertised to “bring paper to life with circuits”, another set says “build gadgets with circuits” and the sewing kit boasts “sew lights on anything!” Plus they have a book entitled “Crafting Wearables” focused on blending fashion with technology.

Oh, Teknikio… you have our attention!

Kennedy continues to express an interest in fashion and design. We have realized we need to embrace her passions in a way that will help her determine if this is a potential career path. She watches the episodes of Project Runway that have kid designers, she checks out books about the history of fashion and even attended a fashion camp a couple summers ago. The idea of having her sew and integrate technology into it can be a nice feature in her future portfolio. These kits may be the future of crafting. 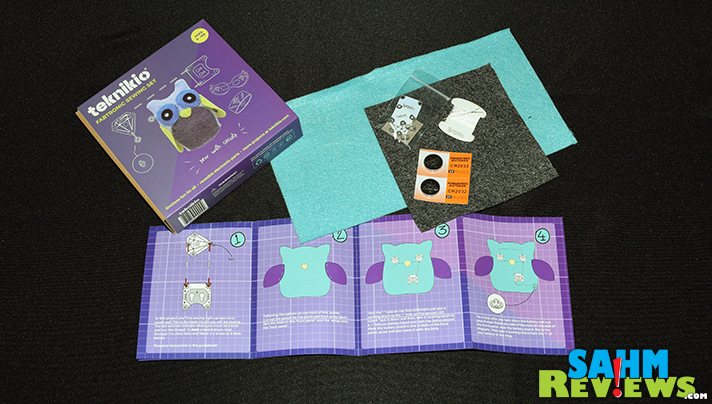 The Fabrtonic Sewing kit includes all the REUSABLE components required to make (and remake) a variety of sewing projects. Using the included basic instructions or the online Fabtronic Sewing Guidebook, create an owl with light-up eyes or something else from your own imagination! 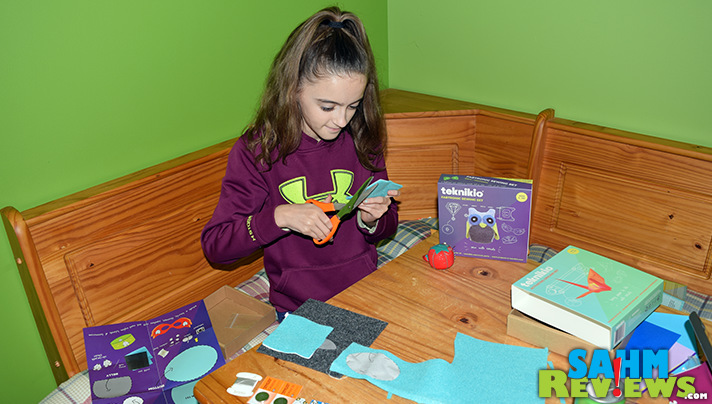 Each set includes the sewable snaps, color-changing LEDs, a needle with conductive thread and paper. Yes, batteries are included, as is the holder that is used to sew the battery onto the fabric. Kennedy took to the kit like we expected and started planning out how she was going to make her fancy owl specialized to her own tastes. 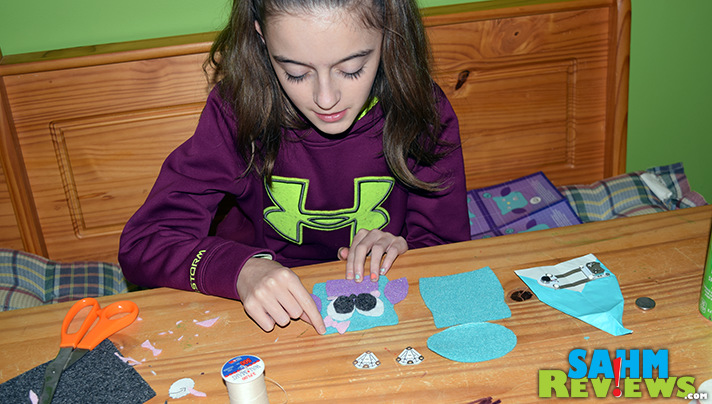 We had a few problems with the clarity of the instructions but we were able to figure it out through the detailed explanations of how circuits work. The use of a snap (half attached to the body and half to the wing) to open and close the circuit put the entire “closed circuit” concept into perspective and I’m certain it will help her think up some unique accessories – especially when she is done reading the Crafting Wearables book. The book is very comprehensive starting with the history of wearables, integrating technology into fabrics, how to add various components to create wearable items as well as future possibilities that include 3D printing, activated garments and designing for the body. Crafting Wearables even goes into details on who technology is being incorporated into beauty products such as fake eyelashes and nails.  When Kennedy is done reading this, her mind is sure to be filled with ideas! 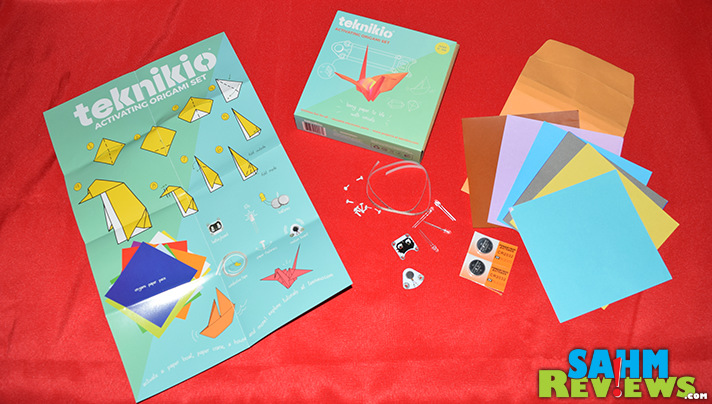 Kids learn basic origami at a young age and create unique creatures such as cranes and flowers. These designs can come to life with the Activating Origami Set which includes a motion board, conductive tape and LEDs. Create a dancing penguin or a bunny that spins. Maybe a crane that moves, even.

Madison decided to make the penguin that was featured in the instructions rather than try to create something on her own. As with the sewing kit, the instructions could have used a bit of clarification but once we got the hang of it and realized it didn’t need to be perfect, we were fine. 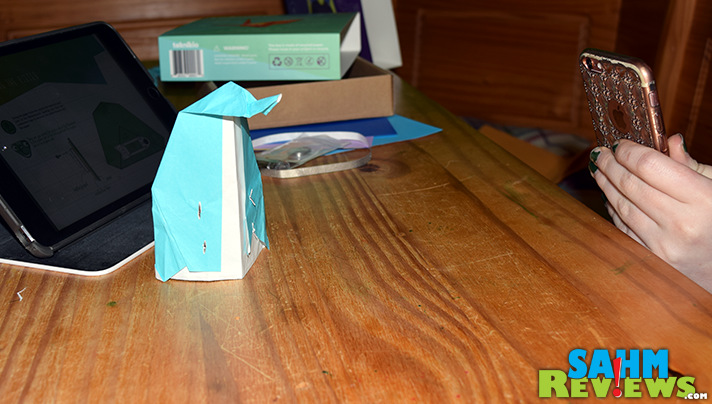 Madison was intrigued by the conductive tape and seemed to enjoy figuring out how exactly it was all working. When she didn’t line the tape up quite right, she backed up a few steps, corrected the electrical error to close the circuit then moved forward. Apprehensive at first, she was excited once she saw the penguin shimmying across the table. 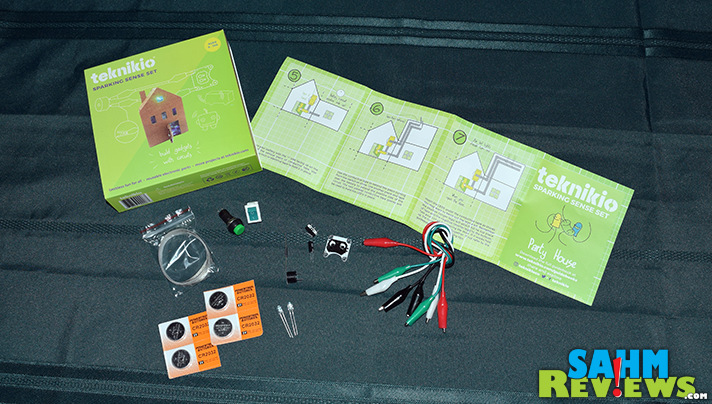 There’s a third kit available that utilizes alligator clips, LEDs, conductive tape, push buttons and switches. The Sparkling Sense Set is designed to incorporate more detailed tasks. This will be the next one the girls work on but I’ll want them to work on it together to learn these more advanced concepts. While all the kits have detailed instructions and guidebooks, these aren’t something I was able to hand off to them without providing some adult guidance. Even at 14 and 12, both with experience in robotics, they still needed assistance in finishing their projects. These are best as family projects in the beginning.

What if they get tired of what they created? Then they can disassemble it, use fresh materials and make something else. That’s the beauty of the system… it’s not a one and done craft project kit. It’s designed to introduce the user to the STEM properties of these components, how to use and integrate them into the materials. Those skills are the launchpad to expand, combine and create all kinds of other items.

Once crafters have mastered the way the sets and circuits work, they can combine them or use supplies of their own to create more extravagant projects. You can get more ideas by visiting the gallery of projects created by other kit owners. Great for homeschool or simply to up the value of homespun craft projects, Technikia kits can be purchased from Amazon or direct from their website. Follow them on Twitter or Facebook for updates on their various endeavors.

Have you tried integrating technology into crafts?

15 thoughts on “The Merging of Crafts and Technology”