By sheer coincidence we’re going to be talking about poker again today. Just a few days ago we had the pleasure of playing Main Street Card Club‘s poker-themed card game, Rush to Flush. If you recall, it used just a part of a poker hand, requiring players to race to build only straight flushes and collecting scoring chips based upon the suit they completed. It was a great follow-up to their previous poker-styled game, Rock Paper Poker, which used other scoring hands like pairs, full houses three-of-a-kinds.

But what is a traditional hobby gamer to do if they want something more like a full game of poker but without the risk of losing next month’s rent? And something that is a little more head-to-head like Magic the Gathering? We’ve found the perfect combination in Cryptozoic Entertainment‘s new card game, Poker Assault. 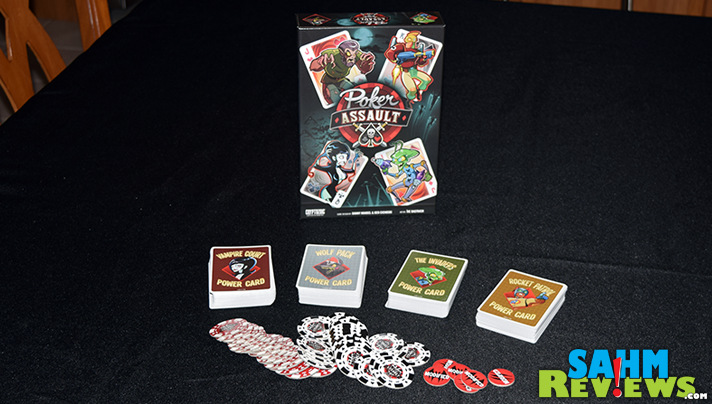 Normally I like to talk about the price of a game later on in my articles. To me, a great game is worth any price, Compared to the costs of going to the movies or dining out, board and card games are one of the best values around. They provide hours upon hours of entertainment and they typically require a table full of friends (or close enemies). You can hardly put a price on that type of social engagement.

It has been our experience that most card games that have a deck size similar to a standard 52-card deck retails for between $10 and $15. I’ll happily pay that (or a little more) if I think the game will hit the table multiple times. Think about it – that is literally one ticket to a new release movie, without the popcorn! So when we opened up the Poker Assault box (currently on Amazon for $13) and discovered not one, but FOUR full decks of custom cards and cardboard poker chips, we were completely amazed. As a bonus, these decks are designed to also substitute as a standard 52-card deck!

So what makes Poker Assault different than just playing a few rounds of Texas Hold’Em? To start, there are FOUR decks! (Did I mention that before?) Each player chooses their own theme (vampires, werewolves, aliens, aeronauts) and takes the matching deck and 10 poker chips. There is also a matching Power Deck with special cards you can earn. 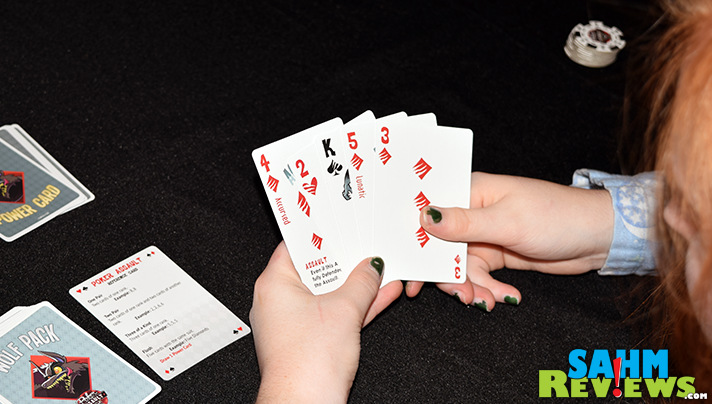 Instead of each round consisting of just building a hand that beats your opponent, Poker Assault has one player on offense and the other on defense. Working from a hand of five cards, on your turn you lay one down in front of you to start your ‘hand’ and draw back up to five. Continue doing this until you have a valid hand (a pair at minimum) to assault your opponent. You can only play to your hand if you have a card that improves it, so if you are ever at the point where you don’t have a valid hand to attack with and cannot play another card, your turn ends and your opponent is now the attacker. 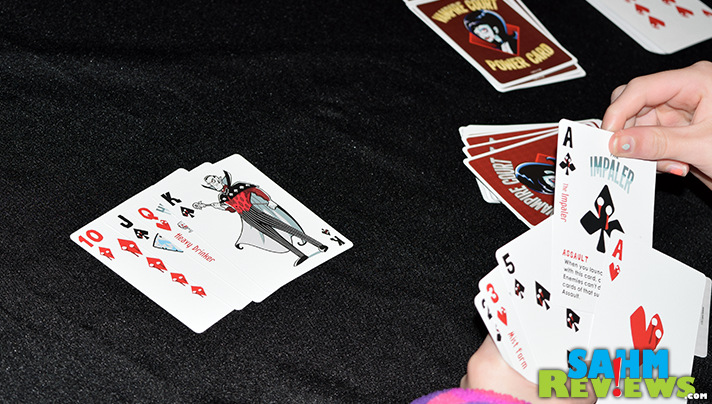 Once you have at least a pair, you declare your attack. The initiative switches over to the defender who must now try to stop your assault. By playing one card at a time, they can block each card from hitting them. They need to play a matching number or a higher number in the same suit to block each card. Every time they play one they can draw back up to five. If they are successful in blocking all of your assault cards, it becomes their turn to become the attacker. If they cannot block them all, they lose one poker chip for each card left attacking AND the attacker gets to build the next assault hand (they attack again). 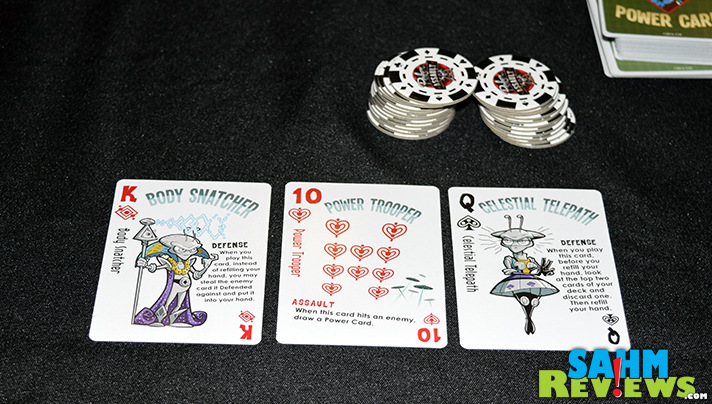 Many of the regular cards have a special ability that are activated when used in an assault. These might deal extra damage when unblocked or may be considered as a different number (wild) when resolving. 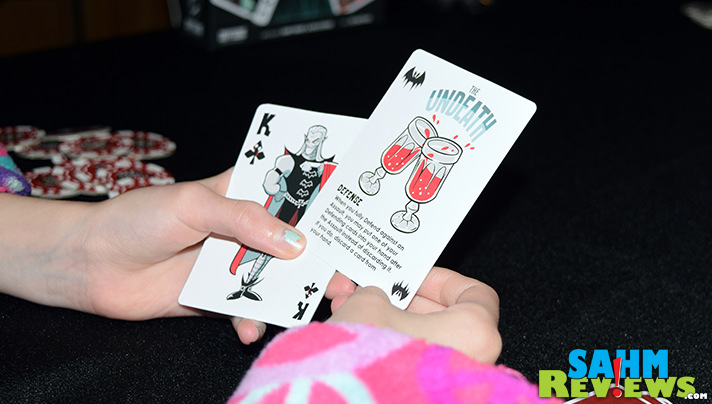 If you are able to create an assault that is a Flush or higher, you are awarded a Power Card from your deck. These one-time use cards add powerful attack and defense abilities that when played at the right time, can swing the entire game in your favor. 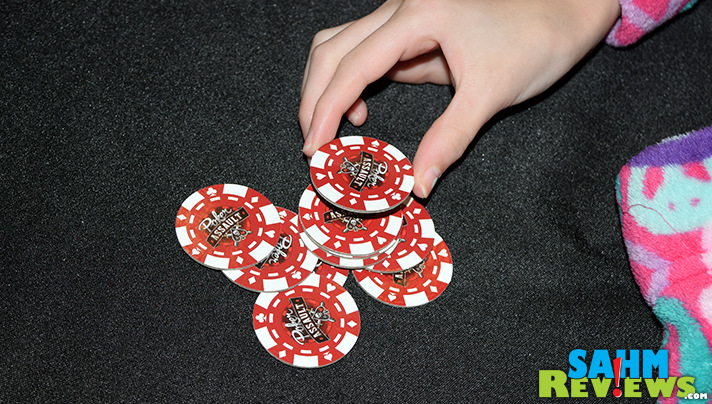 Obviously, the first player to run out of poker chips loses. Poker Assault supports up to four players with four playing in teams of two, and three playing head-to-head with both opponents being allowed to defend against your attacks. As with many games, having an odd number of players can be a bit awkward, so we recommend either a 2-player game or playing as teams with four. 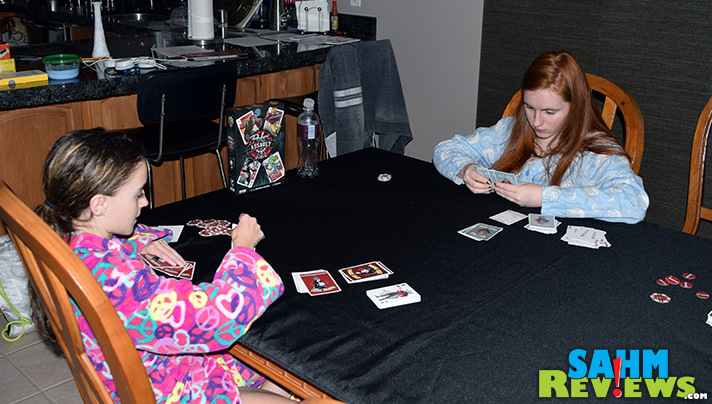 The rule book states that when one person’s poker chip stack is reduced to zero, they’re immediately knocked out of the game and last player standing wins. It seems to us that maybe the first player has a bit of an advantage in this scenario, so we’re experimenting with letting the other player have another turn if they didn’t go first. This gives them a chance to also knock out their opponent or even damage them greater so they can pull off the win! With this variation, we’re sure to get our money’s worth out of Poker Assault.

Again, right now Poker Assault is only $13 on Amazon, well below its MSRP of $20. It’s a relatively new release, only hitting the shelves just before Christmas. Your local game store might not have even received their copies yet, but be sure to ask them when they’ll have Poker Assault in stock. In the meantime, follow Cryptozoic Entertainment on Twitter and Facebook so you’ll know of all their new releases before your local game store!

Have you played poker before? Are you any good at it?