When you think of travel games, what comes to mind? For many it is smaller versions of traditional classics like Scrabble or Connect 4. They’re typically the complete game with special components (sometimes magnetic) designed to be used in the back seat of a car. But let’s be honest, the days of playing a board game in a car are long since gone thanks to iPads and hundreds of thousands of apps.

That doesn’t mean we don’t enjoy playing games while not at home. We always bring along a title or two in case of inclement weather or an unexpected delay at the airport. We’ve even used them as a break while on vacation! When I look for a travel game I consider a couple things. First, of course, is portability. It needs to take up very little space in the suitcase and not add much weight. We could probably suffice with just a deck of cards, but where’s the fun in that. We thrive on deeper, more strategic games and we shouldn’t have to sacrifice just because we’re not within arm’s reach of our game collection. So that’s our second criteria – it needs to be much more than just a card game and as close in depth to a traditional bigger-box issue as possible. I guess that’s why we chose this one for inclusion in our 2016 Gift Guide – Card Games! 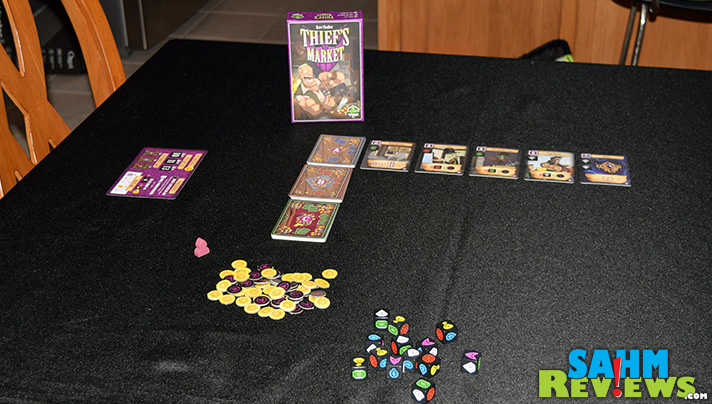 There’s one company we’ve featured in the past that has been hitting this mark for some time now. We talked about Tasty Minstrel Games‘ Flip City last year and featured Harbour in our 2015 Gift Guide series. We were excited to learn they have another small-box game issued just recently that appears to continue in the mold of “Big Game, Small Package”. Let’s take a look at Thief’s Market! 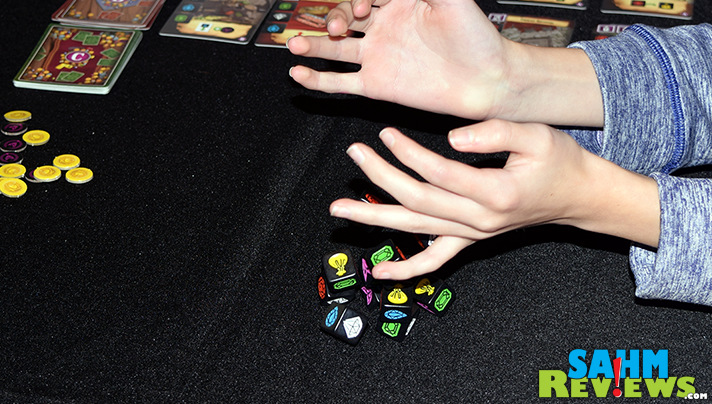 In this game you and your opponents are thieves. splitting up the day’s (round’s) take from your heist. You will use this loot to purchase various goods at the market, each giving you new abilities to use during subsequent rounds. Loot is represented by the thirteen included custom dice and are rolled by the start player at the beginning of the round and placed into the center of the play area. 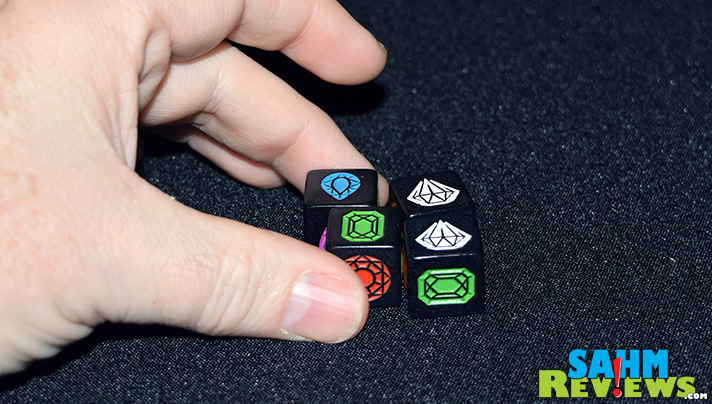 Starting with the first player, they select any number of dice to keep for themselves. The next person then decides to take additional dice from the center or steal all of the dice from another thief (return at least one to the center by rerolling the die). (This reminds me of our family’s Christmas gift exchange…but that’s another story.) This continues until all thieves have some loot in front of them (when you steal you steal everything, thus leaving that person with no loot and the opportunity to collect/steal again). 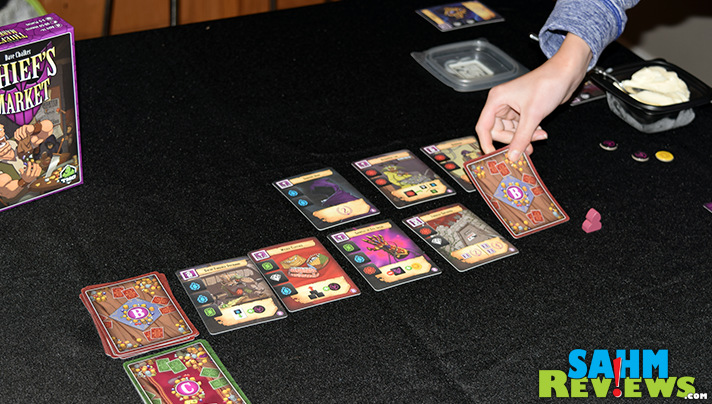 Now that all the loot has been distributed, it is time to spend your ill-gotten gains. In turn order, players head to the market to spend their jewels on one item available in the market whose price is listed on the left side of the card. Each item awards a bonus and might be worth points at the end of the game, allow you to manipulate your dice during the market phase or even gain infamy tokens, which are the victory points of Thief’s Market. 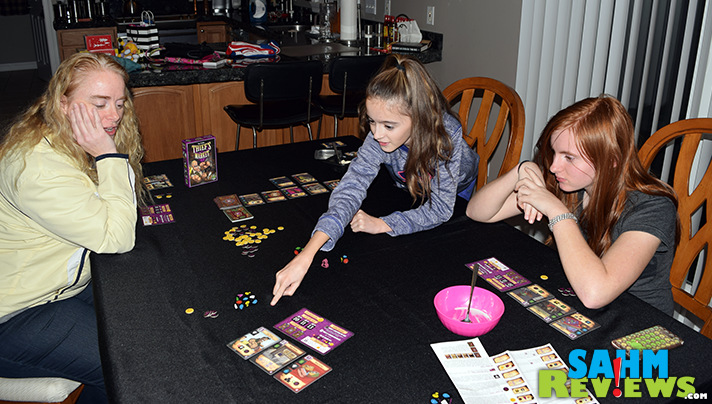 Once everyone has had an opportunity to purchase one (or more, if you have items that allow it) card, all dice are returned to the center and rerolled for the beginning of the next day. Market Cards are divided up into three letter categories, and once you reach the end of the “C” stack, the game immediately ends. The player with the most Henchman icons on their purchased items earns three Notoriety Points, with second place receiving one as well. If you have the most gold tokens left over you are also awarded one point. All Infamy Tokens convert 1:1 into Notoriety Points and the player with the highest total wins! 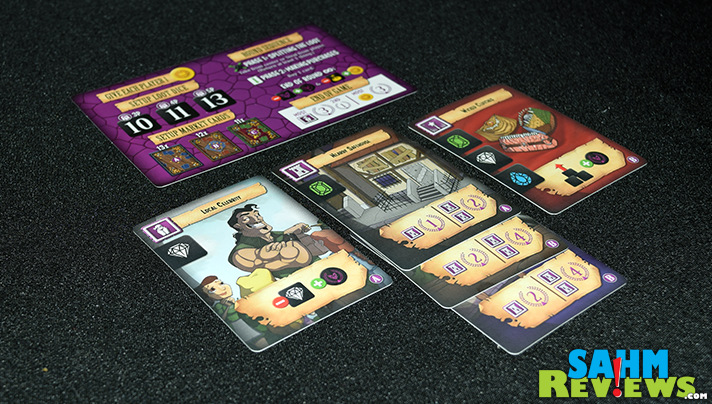 In order to be successful at Thief’s Market, you need to build great combinations of items purchased at the market along with the ability to balance risk/reward when selecting your loot. Too greedy and you’ll have your stash stolen by a fellow thief. Too generous and you’ll be at a disadvantage when you all proceed to the market! And it’s there where you can purchase items that, for instance, let you gain an extra gold piece whenever you turn in a gold bag. Combo that with the “Exit Strategy” item and each gold piece can be traded in for TWO Infamy tokens! 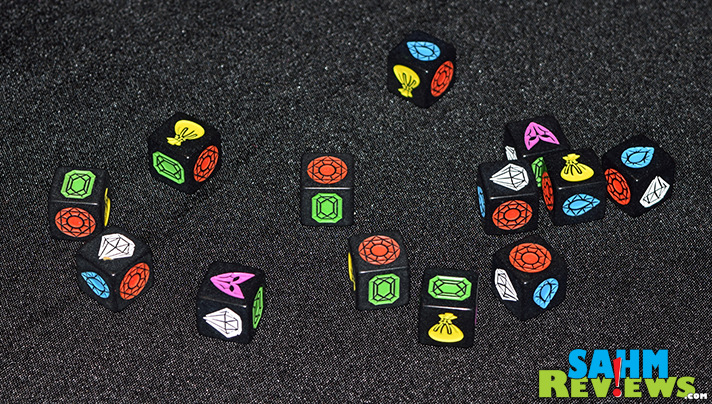 With 49 different items to purchase in the market and only 36 being available in any game, no two sessions of Thief’s Market will be the same. And with the availability of promotional cards (and a possible expansion), you can continue to build upon the base game. Amazingly, copies of Thief’s Market are only $14 shipped on Amazon and can also be found at your local hobby game shop.

2016 proved to be a banner year for Tasty Minstrel Games and we’re hearing rumblings of an even greater 2017. Let’s hope they have a number of small-box games like this one in the works along with the heavier hobby games they’re traditionaly known for. Give them a follow on Twitter and Facebook to be the first to know about their new releases!

What is your go-to game to grab when travelling?

13 thoughts on “How to Become the King of Thieves”