We know you still have shopping to do. So do we! But you realize that we’re just a couple weeks away from Christmas and Hanukkah, right?

This is our final 2016 Gift Guide which focuses on card games. The games included all have one thing in common and I’m sure based on the title of the guide you can guess what that is. Cards! Some have additional game components, but they all focus primarily around cards. Some are strategy, others educational. Some are fast while others require more time. The themes range across the spectrum from garbage (including its own can!) to gold, words to science, wizardry to war and more.

The clock is ticking and we’ve given our all to provide you lots of gift ideas for everyone on your list through our various gift guides. Happy shopping!

Want more details about a specific game? If you see the

logo, click on it to be directed to an in-depth review. If you don’t see it, just ask! 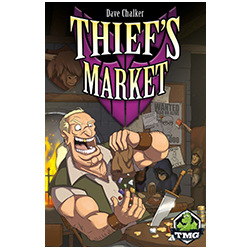 Another day, another Diamond! Split the loot from your latest heist then use it to recruit henchmen, buy magic items, and generally make yourself the most notorious thief this side of gulls bottom. 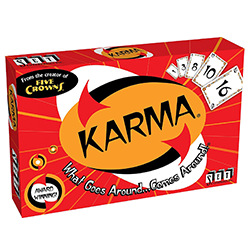 What Goes Around…Comes Around!® Race to get rid of all your cards by playing a card of equal or higher value. In this game there are multiple winners. You never really know who’s going to lose until the very last card. The dramatic ending calls for an instant rematch! Ages: 8 to adult • Players: 2 to 6 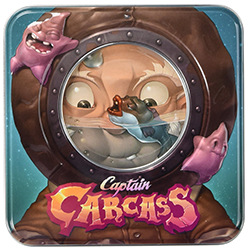 Welcome to Captain Carcass, a world of underwater adventure and danger. Collect loot from under the sea. But here’s the catch: get too greedy, and you could lose it all!

Captain Carcass is a 2-4 player game that is a press-your-luck style game that many have described as “Incan Gold meets Blackjack”. 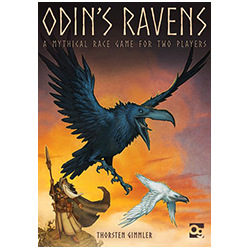 Every morning Odin sends his ravens, Huginn and Muninn, across the entire planet to bring back news of what life is like on Earth. Naturally, after thousands of years, they’ve gotten a little competitive

Race through the landscape in opposite directions to be the first to return to Odin with your news. Focus on speed, enlist the help of the trickster god Loki to create shortcuts, or hinder your opponent. Odin’s Ravens is a fast-playing race game of thought and memory for two players. Ages: 8+ Number of players: 2 Playing time: 30 minutes 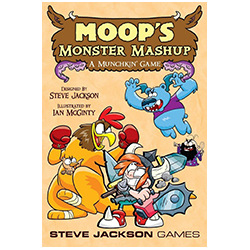 The marvelous magician Moop is mashing up monsters to meet the marauding munchkins!

Wordplay abounds in this funny game for three to six players! Moop, the malevolent magician, is creating mashed-up monsters like the Kangarooster and the Drizzly Bear. The players have to fight the monsters with equally mixed-up weapons, like the Beaver Cleaver. This is a Munchkin game, so you can combine it with other Munchkin sets. Ages 10 and up, for 3 to 6 players. One to two hours. 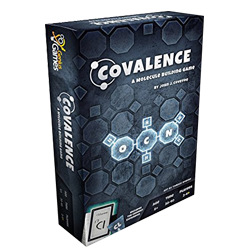 Covalence: A Molecule Building Game is a puzzle-style, cooperative, chemistry game! In Covalence, players work together to build a number of secret organic molecules. One player takes the role of the “Knower” who knows what the secret molecules are, while all other players, “Builders”, must deduce and build these secret molecules, based on Clues the Knower gives them. If the Builders can use these Clues to construct their secret molecules before their limited number of Guesses runs out, everyone wins! 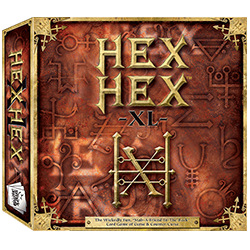 Much like a wizarding game of hot potato, HEX•HEX™ is a fast-playing, “take that” card game for 3-6 people. Players hurl Hex after Hex around the table, constantly redirecting, deflecting and altering the Hex’s power until finally someone runs out of options and becomes HEXED. Boisterous fun for the whole family. 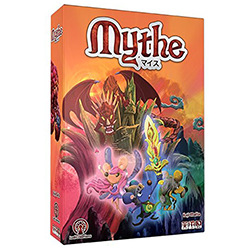 The Sacred Cheese has been stolen! You and your fellow players take on the role of courageous mice from the kingdom of Mythe, charged with the task of rescuing the Sacred Cheese from the evil Red Dragon’s lair. Success will depend on a little bit of cunning…and a little luck…to be the hero Mythe deserves in this clever and adorable board game for 2-5 players, ages 6 and up. 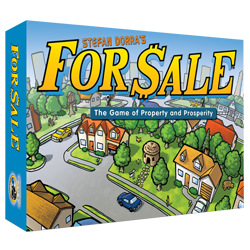 Going once! Going twice! Sold to the highest bidder! Bid and bluff your way to purchase the most valuable real estate for the lowest amount of money, then turn around and sell those houses (and shacks) for cold hard cash. Be the richest mogul at the end of the game to win this Stefan Dorra classic.

In this perfectly-crafted bidding game, players are forced to make a multitude of difficult decisions every minute…and that’s just in the first phase of the game!

Behold the saga of Baba Yaga! Use spells, potions, and a bit of luck to capture the legendary sorceress. Summon an enchanted owl or a plucky pelican to help you, but only if you can concoct the proper potions first. Think strategically and stay alert, because the card game could end at any moment! Get the lowest score and conjure up a win! 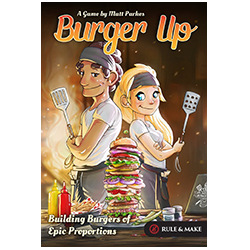 Use the freshest, tastiest ingredients to make the biggest, most mouthwatering, gourmet burgers around. Satisfy your customers to earn money, upgrade your restaurant, and become the best burger restaurant in town. Burger Up is quick to learn yet offers players a satisfying puzzle challenge of matching ingredients to complete orders ahead of your rivals. While speed is important, the bigger you make your burger, the more rewards you earn. Burger Up offers players a fun and delicious experience in a densely packed game. 2-4 players, Recommended Ages: 9+ Time to Play: 30 minutes 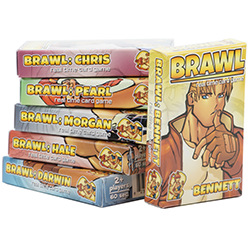 Six fighters. Sixty seconds. One incredible real-time smack down. BRAWL is a fighting card game where the object is to play the most “Hits” on your side of the table before the game ends. Learn to play in turn-based training mode and then move on to tournament mode, which is played in real-time with no turns.

BRAWL is packaged in 35-card decks. Each deck represents a unique character with a different mix of cards, and each player needs one deck to play. 2 Players, Age: 10+ Time: 60 seconds. Each deck is sold separately so you can customize your brawl. 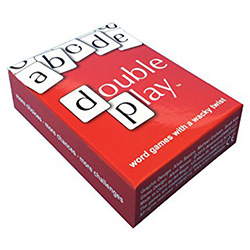 Award-winning new generation of word games that give you more freedom to choose. Magically turn any letter into another just by rotating the card 180 degrees! This wacky twist is a game changer. Literally. 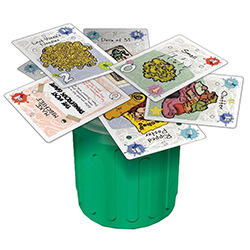 There’s an epic battle of wits being slyly waged among you and your roommates. No one speaks of it, but when it comes to taking out the garbage, it’s all about the art of the dodge. In the pursuit of avoidance each dexterously stacked banana peel represents a small victory. But the greenish milk carton you secretly stashed under your roommate’s bed, that was a stroke of genius! That is until you get caught making a mess. Be careful and be cunning. Only the champion can gloat in a hammock while everyone else lugs out the trash on Garbage Day. 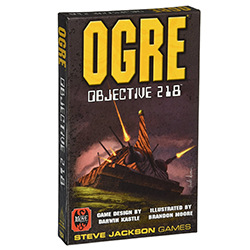 The fast-playing card game of futuristic armored warfare! Supertanks, infantry, and GEVs slug it out to defend supply lines and keep pressure on your enemy in this two-player experience. Based on the classic world of Ogre and the gameplay of The Battle for Hill 218, this is a quick-playing, portable card game of futuristic warfare. Ages 10 and up. 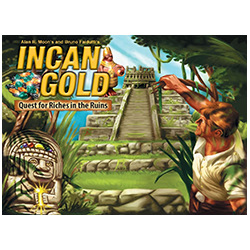 Incan Gold is an award-winning game in which players push their luck as they head into a ruined temple, attempting to find the most jewels. Each turn, a card is turned over that increases the gold found in a temple or shows a hazard. Players can attempt to escape, keeping the loot they’ve acquired, or stay in the temple, hoping for increased profits. As players escape, those in the temple will acquire bigger shares of each pile of gold found, but also run the risk of death if the same hazard card is drawn twice. Up to eight people can play this game, so it works very well at parties and other gatherings. 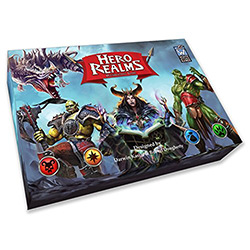 Hero Realms is a fantasy-themed expandable deckbuilding game from the creators of Star Realms (winner of multiple game-of-the-year awards). Battle with your friends one-on-one or in groups. Add custom starting decks to play as a Cleric, Fighter, Ranger, Thief, Wizard or even a mighty Dragon! Portable box and easy to learn. Available December 20, 2016.

Whether your gift recipient is a regular gamer or not, card games provide the comfort of limited pieces so they aren’t overwhelming. At the same time, these games offer players a fun experience and often can be very strategic. The themes and difficulties rum the gamut! Again, look for the tiny

logo on titles that we’ve previously given a full preview. Be sure to keep an eye out for many of these items to show up in our 100+ Days of Giveaways. 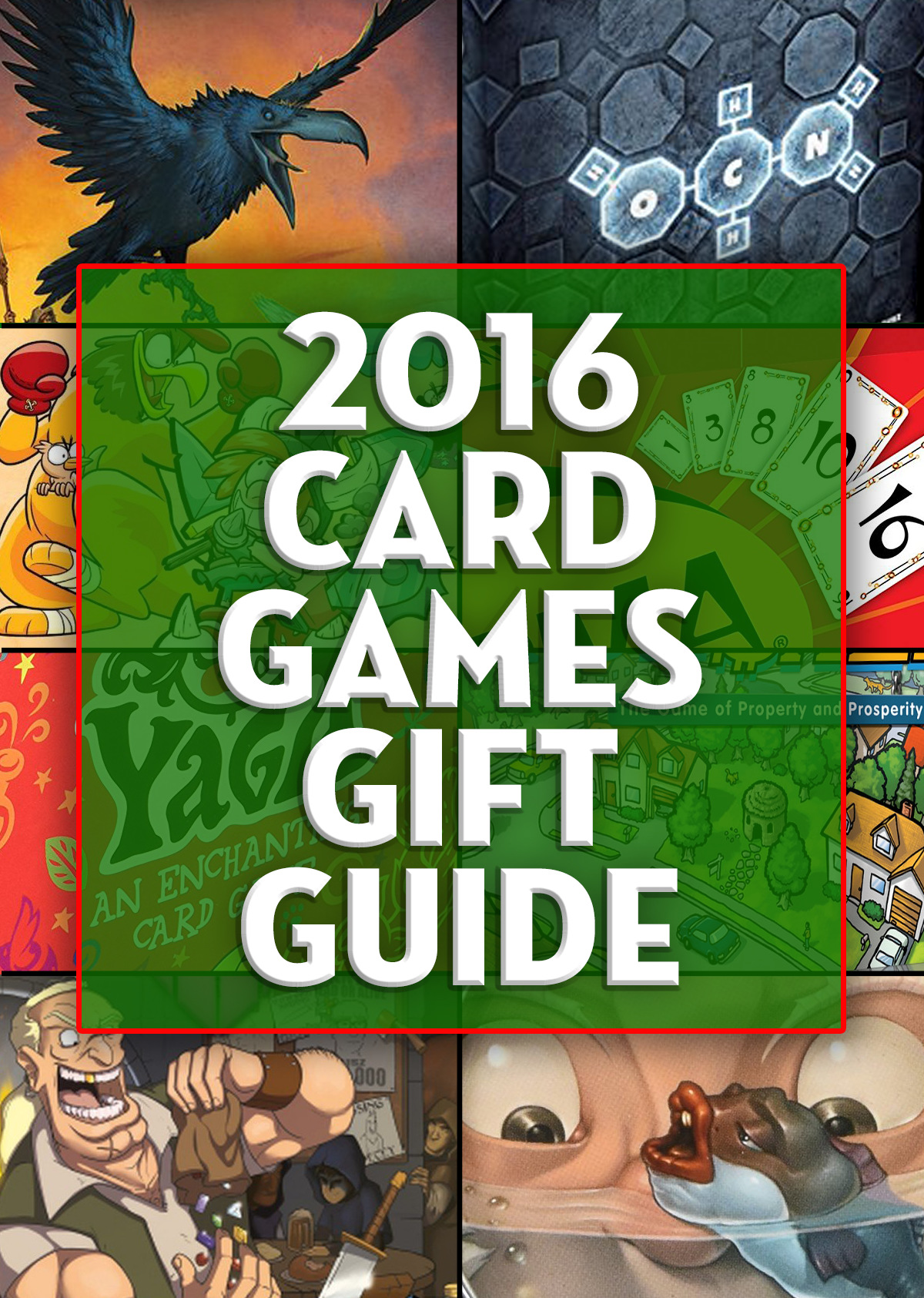