For the past few years there’s been a major shift in the way board games are introduced to the marketplace. Like many other items, you used to have to have a business plan, capital and an appetite for risk taking. If you had a game you wanted to produce, you either contacted an established publisher and sold them the rights, or you went it alone, putting up the money to manufacture X number of copies and sold them on your own via mail order or trade shows.

With the introduction of Kickstarter the barrier to entry has been lowered to almost zero. A good idea, even if only in prototype form, is sometimes enough to get your product into customers’ hands by utilizing their crowdfunding platform. But what most don’t realize is that Kickstarter also shifts the risk burden to the consumer.

That’s one of the main reasons we have not covered many Kickstarter projects on SahmReviews. What good would it be if we recommended a game, only to never have it see the light of day? Even worse, you make a pledge and the creator never fulfills his responsibilities and you receive nothing. Or something substantially different in quality than what you were promised. Some of that proverbial egg would be on our face too.

The very few times we have chosen to highlight a Kickstarter campaign was due to the fact they were coming from established companies, not first-time creators. They had already proven themselves as successful businesses and were simply using Kickstarter as a means to either reach a larger audience or to help fund a larger-than-normal undertaking that would normally require a short term bank loan to fund manufacturing. So today we’re happy to provide a follow up to one campaign we talked about way back in the summer of 2015 – the Titan Series by Calliope Games!

If you recall, it was a never before attempted project that included nine games over the course of three years. And the goal was also to have backers involved in design decisions, giving everyone a stake in the success of each title. Fast-forward to Origins 2016 and Calliope Games had high-quality prototypes available for demonstration at their booth. We were fortunate to play the first three in the Titan Series, two with the games’ designers! And now, those same games are done and available to be purchased by you! 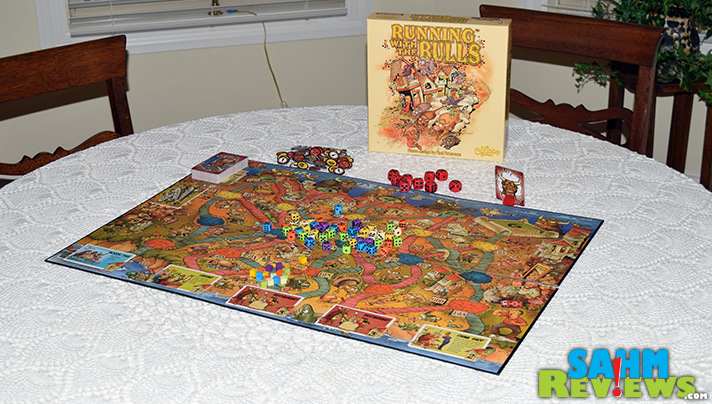 The first title we played at Origins is also the first we elected to break the seal on – Running with the Bulls. We’ve professed our love for dice games in the past, and this game includes 60 of them in two sizes and six different colors! 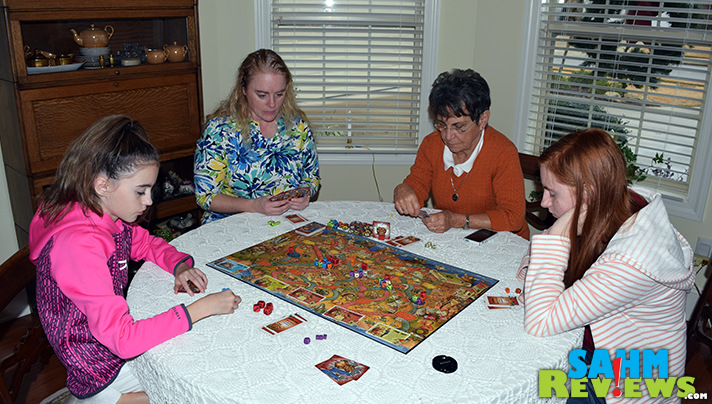 Running with the Bulls is a board game version paying homage to the event held in Pamplona, Spain every year. Your goal is to reach the finish line without being trampled by the stampeding bulls directly behind you. Taking place over three days (rounds), you receive points and bonuses for every runner of your dice color that makes it to the end alive. 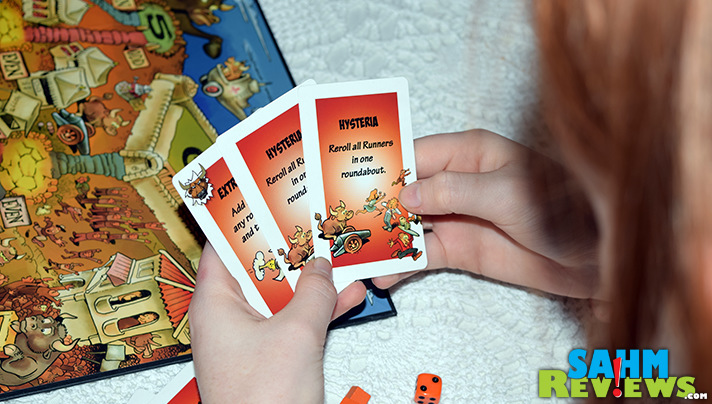 Each player begins the game with a number of matching colored dice (determined by the number of players) along with a hand of five action cards. The dice are rolled and placed at the top of the board in their matching numbered spots (2-5), with ones being wild and allowed to be used in any starting space. 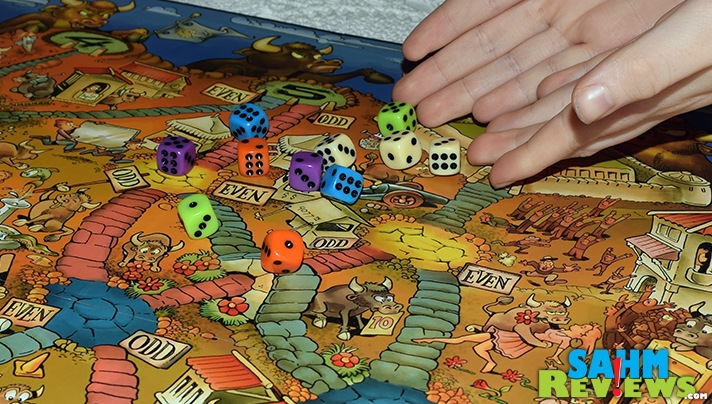 The larger red dice are the bulls and are also rolled and placed in the same starting areas. That’s when the event starts and the running begins! On their turn, each player must play one action card, which is resolved immediately and might allow you to reroll runner dice, influence bulls or even gain points! Once all players have played their chosen card, all runners are advanced down the track according to the signs on the paths. If there is only one path, all dice are moved along it. Multiple paths have signs labeled either “Even” or “Odd”, and dice are moved along it depending upon the number of pips shown. 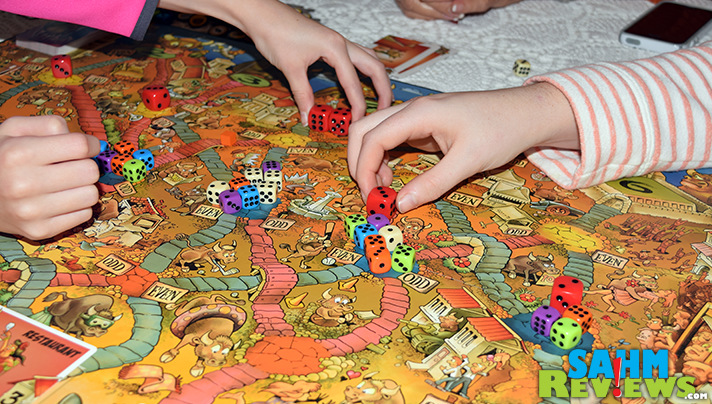 Lastly, the bulls move AND CHARGE! They move along the path in the same manner as the runners, but at the end they charge and try to trample them. Each runner whose die matches the value of the bull must reroll in an attempt to escape the charge. Roll a new number and that runner is safe, keeping his new result. Roll the same number as the bull and that runner is trampled and removed from the round. 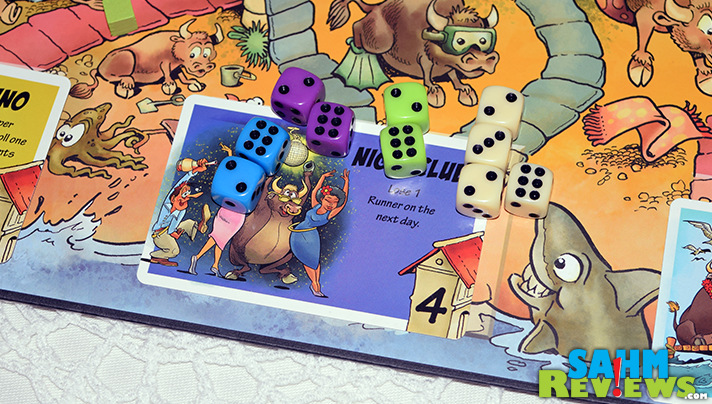 Once the runners reach the destination cards at the bottom of the board (and checking to see if they were trampled), each player receives scoring tokens equal to the amount on that particular destination card and applies any penalties or bonuses also listed. 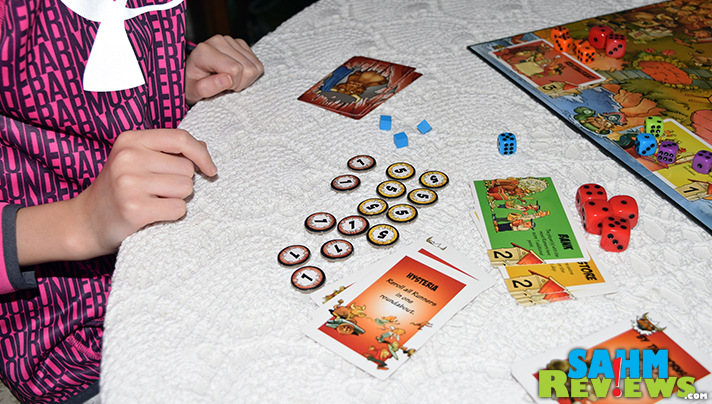 Discard any action cards you no longer want and draw back up to five, reset your runners at the top, including any that were trampled, and reset the board with new destination cards. Now you’re ready for the next day! At the end of the third day, the player with the highest total score is the winner!

Running with the Bulls is one of those games that is super easy to teach and keeps people of all skill levels on the same playing field due to the luck needed with so many dice rolls. Expect a full game to last around 45 minutes and can be easily played by kids as young as six or seven! Supporting up to six players, running with the Bulls is a bargain at around $26 on Amazon.

In the coming months we’ll showcase the next two games in the Titan Series line, Hive Mind and Menu Masters, and are hoping to see some of the next titles at this summers’ game conventions! In the meantime, be sure to follow Calliope Games on Facebook and Twitter to see what else they have in the pipeline!

Have you ever participated in a real running with the bulls? Do you want to?

9 thoughts on “Running With the Bulls Dice Game Overview”