It’s never too early to start kids on the path to being lifelong gamers. In a world filled with digital this and online that, being offline with family or friends improves social skills while also developing the much-needed skills of learning to win and lose with grace.

We know you’ve seen some of these on the shelves at retailers, others online, but have you considered purchasing them as holiday gifts? You should! We continue to offer a variety of gift ideas for all ages and abilities of your potential gift-recipients and hope some of these resonate. Struggling with finding the perfect teacher gift? Some of these are incredibly affordable and would add to their teaching shelves nicely.

As we have said before, the

logo indicates that we’ve written about it previously in more detail so I encourage you to check that out if you’re on the fence. 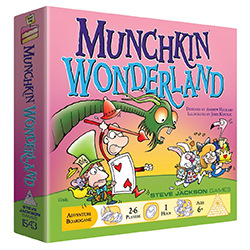 Wander Wonderland! Collect whimsical treasure! Fight the Red Queen! This game for ages 6 and up lets players explore Lewis Carroll’s Wonderland! Move around the illustrated gameboard collecting Treasure cards. If you land on a monster such as the Jabberwock or Cheshire Cat, beat it with a roll of the dice and Treasures like Six Impossible Things Before Breakfast, the Dormouse, or Stolen Tarts! Collect the most gold to win! For 2 to 6 players. 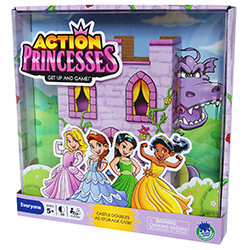 Every turn requires you and your friends to get up and perform a silly action before you can roll again. Work together to find the key to the castle and the sword that will defeat the dragon.

Giggling and silliness is highly encouraged! 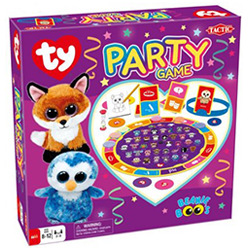 Be on the lOOk out for the Ty® Beanie Boos™ games from Tactic Games USA. Beanie Boos™ Party is four exciting party games in one – all wrapped up in Ty cuteness! Players move their playing piece around the board. During a player’s turn, they draw a card that indicates if they have to Draw, Describe, Act Out, or Guess the Ty Beanie Boos character on their card. Includes a card-holder headband, cards, pencil, drawing pad and the game board that shows all of your favorite Ty Beanie Boos characters. 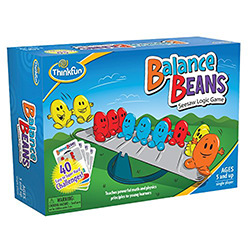 Balance Beans is a logic game and math game all in one. Use the Challenge Card to arrange the Red Beans. then carefully place the blue, yellow, or orange Beans on the Seesaw to keep it from teetering. When you balance the Seesaw, you are actually balancing an equation! This bean-filled logic game is a fun way to introduce young learners to elementary algebra. Balance Beans was recently named a winner in American Specialty Toy Retailing Association’s (ASTRA) 2016 Best Toys for Kids list. Available on Amazon, Target and neighborhood toy stores. 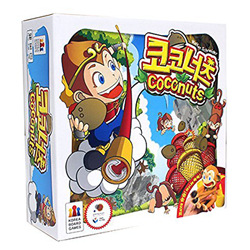 Coconuts is the #1 rated children’s game on BoardGameGeek.com. Quick fun game for the entire family! Long ago the Monkey King left his kingdom in the care of his children while he took a journey which kept him away longer than he had intended. Upon his return found his children fighting and his kingdom in chaos. The king gathered his children and explained what makes a successful ruler, “The first monkey to collect supplies for winter will replace me as ruler.” The children bowed but each whispered to the other, “Beware, I have magic.” Shoot your coconuts straight and true to collect them in the basket, but beware the monkey magic that might monkey with you. 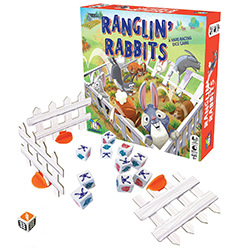 It’s a bunny break-out! A herd of hasty hoppers is headed for the hills, and it’s your job to halt them. Work together as a team to corral the cottontails by flicking, lifting, and rolling the dice. But hop to it! There’s trouble afoot if they all escape before you can mend the fences. Wrangle the rabbits and you’re a 24-carrot champion!

Spot it! Finding Dory puts a Dory spin on the family favorite, spot it! just like the other spot it! games, Finding Dory will come with a variety of unique symbols for you to identify and match from card to card. Many of the symbols represent Nemo, Dory and their fish friends. You’ll recognize characters from Finding Nemo, like dedicated dad marlin, nemo’s school pals, and a couple of familiar sea Turtles, but you can also expect newer friends from dory’s upcoming adventure to make an appearance. Play it once or play all night, with 30 unique cards and five different mini-games, you’ll never want to stop swimming with Dory and friends in spot it! Finding Dory! 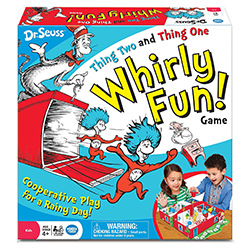 Cooperative play for a rainy day! With Mother out of the house for the day, The Cat in the Hat has brought Thing One and Thing Two to play! Oh, but these Things run about with bumps, thumps, and kicks! Work together to clean up their mess before Mother comes home. It’s cooperative fun for everyone! Promotes • Cooperation and teamwork • Physical dexterity • Color and shape recognition. 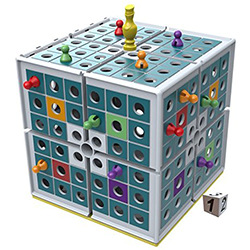 Squashed™ changes the paradigm of board games by forcing players to think in three dimensions. The very nature of the Squashed™ results in the cube being flipped multiple times, causing dramatic shifts in power in the omnipresent race to the top of the cube. Would you risk squashing one of your own pawns to take out many others? And should you align with players to take out a major threat? It all comes down to you. Play the game, think in three dimensions, and squash your competition out of the game.

The hilarious Pie Face Showdown game brings friends and family together for lots of laugh-out-loud fun. First, players load the arm with whipped cream (not included) or the included sponge. Then each player places their chin on one of the chin rests and at the count of three, rapidly mashes the button nearest to them, which activates the hand on the throwing arm. The suspense builds as players try to get the arm to move toward their opponent and when it gets too close to the pie thrower, it’ll spring up and that player will get creamed. The player who doesn’t get “pie-faced” wins.

Who else is ready to play?! First, throw a couple of these into your basket for purchase, then get offline, grab a board game and game-on! Don’t forget to look for the tiny

logo to get more information on select titles that have been featured on the site. And of course, some of these games are destined for our 100+ Days of Giveaways.