If you were to go through all of our game articles over the past few months, you’d come to the conclusion that we like to play city-building games. And you’d be correct. While many of them have a lot of things in common with each other, like points for certain buildings being adjacent or the number of green spaces you squeeze in, there have been a few that have stood out to us.

Neom continues to be our favorite, with others like The City, Zoned Out and Warsaw: City of Ruins vying for second. But this week there’s been a new contender on our table and it takes the idea of city-building in a different direction. Villagers by Sinister Fish Games uses cards laid out in a unique manner rather than relying on tiles that simply lay adjacent to each other. 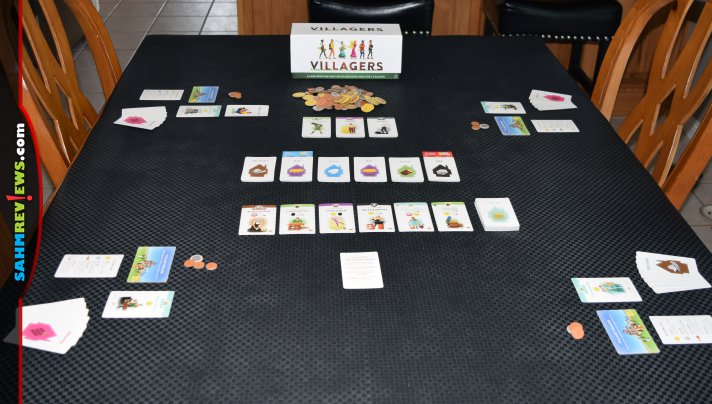 In Villagers, you and up to four other players are founding new villages during the middle ages shortly after a great plague (great timing, eh?). With a reduced population, you want to attract refugees with the most valuable and unique skills to your village, preferably ones that complement the skills of other residents. By building the most efficient team of villagers, everyone will prosper.

Each player begins the game with a village square, a Founders card (with the 2 gold side face-up) and eight gold. The remaining gold is put into a general supply in the center of the play area.  Also in the middle of the table is an area set aside for the cards. The six starting Road Villagers are placed face-up into a line, forming the road. Stacks of Hayers, Lumberjacks and Miners are put into their own stacks and the rest of the cards are shuffled and dealt into six face-down stacks with twice as many cards as players in the game. Any remaining cards are dealt to the players so they have a five-card starting hand and the rest are put into one stack in the reserve. A special First Market card and Second Market card is added to the bottom of the second and sixth stacks as a reminder to trigger an event. 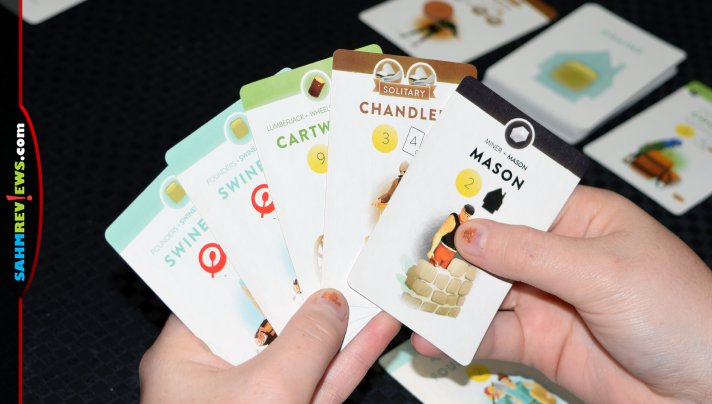 Individual cards in Villagers are marked with a suit symbol. Villagers of the same suit are ones which work together in a similar trade (or alone). Unlike other city-building games, in order to place a villager, many have requirements which must be met in order to attract them to your village. For instance, before playing a Truffler, you must have a Swineherd already in place (because a Truffler can’t locate truffles without someone around to provide pigs for the search!). Cards also list other various stats that show how many points they will earn you in the Market phase(s), if they unlock other villagers or if they offer other building or drafting bonuses. 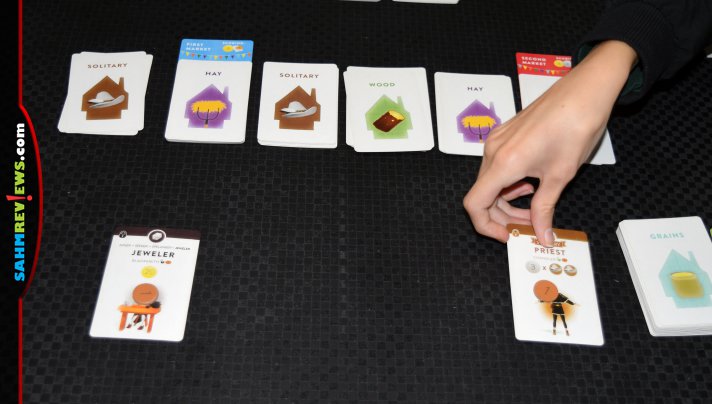 Villagers is played over rounds, which are divided into two phases. During the first phase players will draft villagers from the road or blindly take the top card from any of the stacks. You must draft two villagers plus one for each food you have in your village, but no more than five in total. These are temporarily placed on your Village Square card until everyone has finished drafting. Then they are moved to your hand of cards. Any villagers left on the road that contain coins are discarded and new cards dealt to fill their spot. A coin is then added to all six of the face-up villagers. 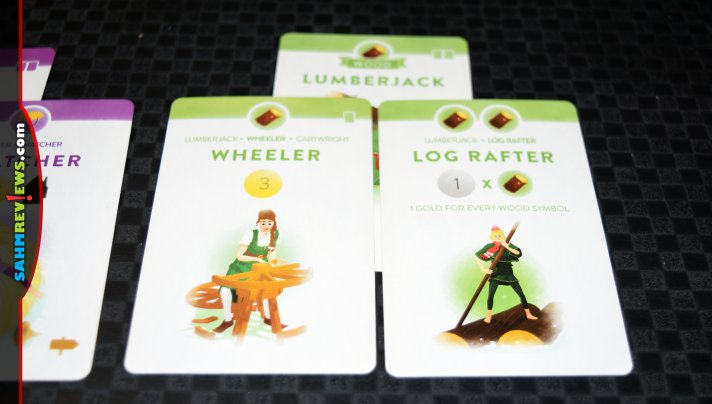 Next, it is time to start the building phase. In turn order, players can place two villagers into their village, plus one for each Builder already in their village at the beginning of their turn. Following the card’s production chain restrictions (if any), they are placed on top of the prior cards listed. Everything under the name of the card beneath the new one is covered up. This means any bonuses you were receiving are now invalid. The first villagers in a chain may have up to two new villagers on top of them. The remaining cards in the chain will restrict placement to just one. There are no limitations to the types of villagers you may have and might also wish to have multiples of the same type! 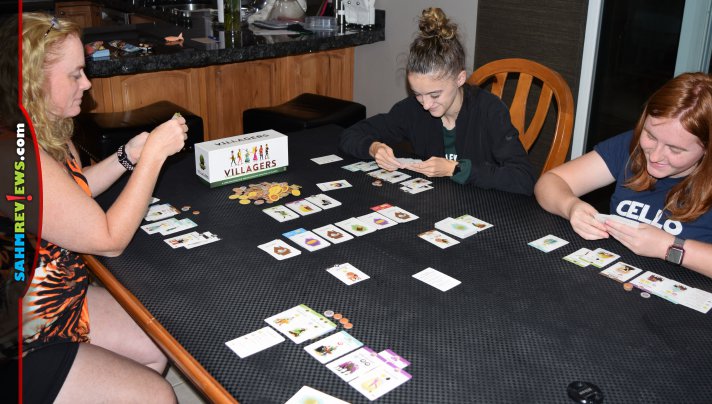 Instead of playing a card from your hand, you may discard one to one of the stacks on the road and receive a basic villager to play. This is a free action and does not count against your build limit. Play the basic villager to the table to start a new production chain and then take your build actions and play on top of them. Always pay attention to lock symbols (you must have a second card in play to unlock it, these have a keyring symbol). Special Villagers cards give you powerful special actions and may require you to discard them immediately after use. 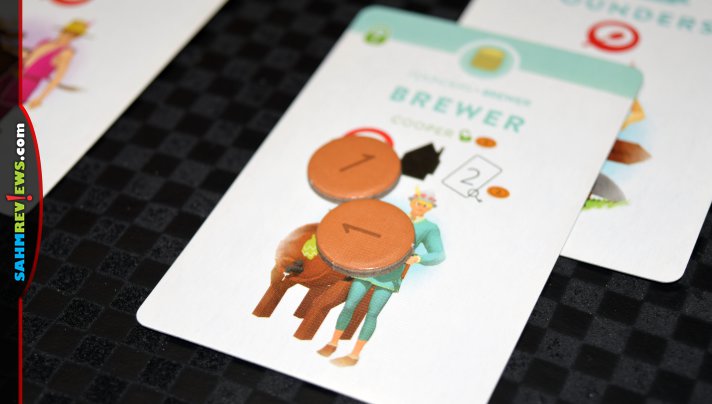 Once the second or sixth stacks are depleted, the market card will be revealed. At that time, you will earn as much gold (victory points) as printed on cards in your village plus as much as any coins placed on them. Silver symbols will only earn you points during the second market phase (sixth stack), while gold will earn during both. The game ends immediately after the second market phase is completed and the player with the most gold in their supply is the winner of Villagers. 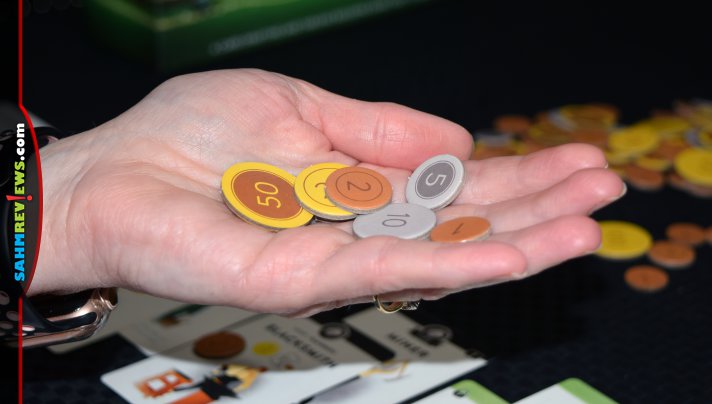 We found Villagers to be a unique take on the idea of a city-building game. With the placement of cards in a tree-like fashion, it hinted of a game of solitaire. And there are solo rules provided, so you can challenge yourself if you have no other opponents available! It took a little time to grasp the idea of production chains and to pay attention to locked cards, but after a couple plays, this was no longer an issue. Like any game, play it more than once before you make a decision on whether you enjoy it or not.

Villagers can be found at your favorite local game store, direct from Sinister Fish Games or on Amazon for Prime delivery. Check out Sinister Fish’s social media channels (Facebook, Twitter) to find out more about the follow-up to Villagers, Streets!