Last week I was in New York for Sweet Suite where I was checking out a roomful of toys and games and predicting 2017 Holiday Trends. While I was there, I ran into many friends – who are also readers – that commented on how we’re always finding games they’ve never heard of.

It’s true and it makes me happy when others acknowledge it. We actually pride ourselves in being able to introduce our readers to games beyond what can be found on the shelves at mass merchandisers. One of the reasons we are so attuned to games is because we attend gaming conventions like Geekway to the West, Origins Game Fair and Gen Con where we are sitting down and playing games with the designers. People we have become friends with. People who we root for. People who have incredibly intelligent and creative souls. At the same time, we take every advantage to introduce ourselves to new game companies so we, too, can find new games! Our latest (new to us) company is Mercury Games, a publisher with a diverse array of titles in their game lineup and others on the way. Here are a few that we’ve had a chance to try out:

A few months ago I attended a travel bloggers expo where I had the chance to chat with folks from the convention and visitors bureau of Quebec City. Being the world traveler that I am (not), I was amazed to hear that the city is actually completely walled-in. I thought that was something reserved for medieval times. When Mercury Games said they were sending The Walled City, I immediately began to research. Sure enough: Walls. Now I want to visit there, but will have to fill the void with games in the meantime. The Walled City is one difficult enough to satisfy someone used to intense games, but not so complex that someone new to non-mainstream games would feel intimidated. Basically, players are working to earn points (votes) by being in control of the various neighborhoods and towers. 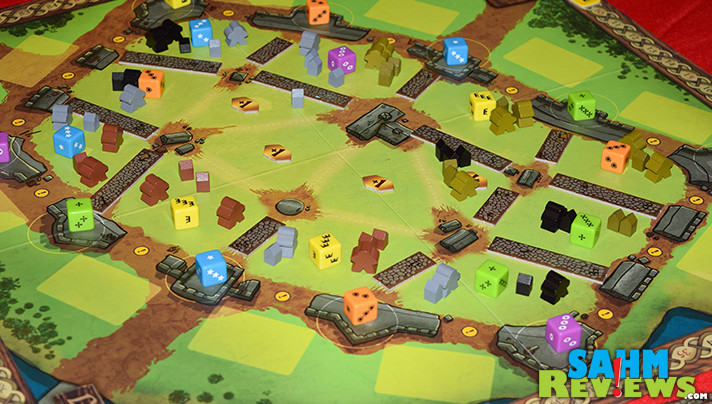 The board in The Walled City is double-sided, each offering its own map and alternate play styles. In general, however, the concept is the same. The board is divided into sections and a random die is placed as indicated. These dice will be used to award points when determining who has the most strength throughout the city. At the beginning of the round, players select a guild, which provides each player with a unique skill set throughout the round. Next, players take turns using construction cards to determine where to place their people. Cards have various numbers on them and the one you select determines how many people you will place on each side of the road you build. A card with 3 / 2 means you place 3 people on one side of the road you just built and two people on the other side.The player is allowed to adjust one die from an area connected to the road just built. Finally, votes are tallied based on who has the most people in a confined neighborhood on the board as well as who has the overall total among a particular faction (the various die colors).

The entire process continues for a second round that includes building walls, opportunities to move characters around as well as scoring various areas. The game is only two rounds, each consisting of 4 phases. As I said, it isn’t overwhelming, but it does have depth. I could go into more detail about The Walled City, but I want to be able to tell you about a couple other titles available! You can add The Walled City: Londonderry & Borderlands to your next Amazon order for $25 or order a copy direct from Mercury Games. 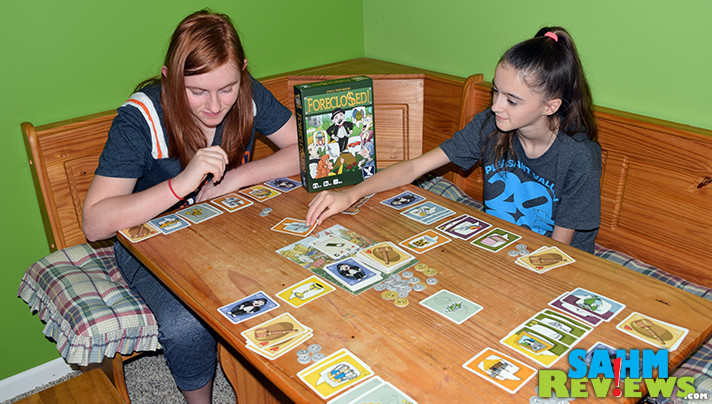 We purchased our first home during the late 1990’s when many families had given up on trying to maintain the mortgage and simply let it go back to the bank. I would never wish such fate upon someone… unless we happen to be playing Foreclo$ed!  In this part-auction, part-negotiation card game, players are trying to acquire valuable items at a millionaire’s foreclosure auction. 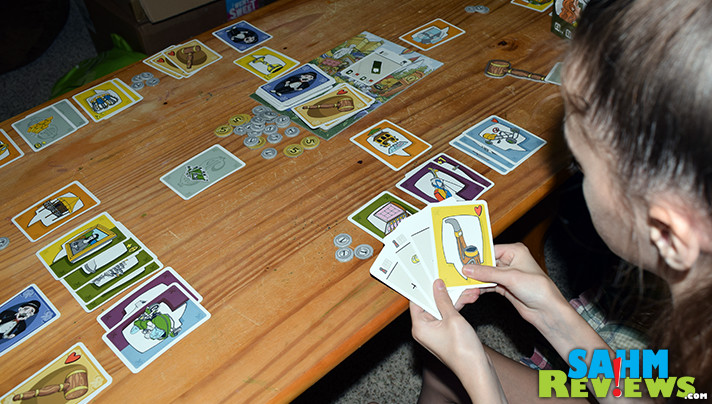 Players begin with a couple property items each along with some money. Those items are part of their permanent collection as players vie for the largest collection of each particular type of item. The chairman of the auction gives each player an item temporarily as other players negotiate to make it their own. On your turn, you can take one of three options. 1) Make an offer to another player in hopes you can exchange their item for yours. 2) Collect an action card or money from the bank. Action cards can impact the transfer of money, provide you with end game bonuses or even prevent others from exchanging cards with you. 3) You must pass if someone has already attempted to exchange with you but you opted to protect. Once each player has taken their turn, the round ends, property is moved to everyone’s permanent collection and the next round begins.

This process continues until all property cards have been distributed at which time the set totals are tallied. The larger your collection of one particular type of property card, the more points you’ll earn. As an example, 3 cards of one set will net you four points but 6 cards would earn you 12. The person with the most points at the end wins. In case you’re curious, Foreclo$ed! won’t put you in the poor house, running under $14 on Amazon. 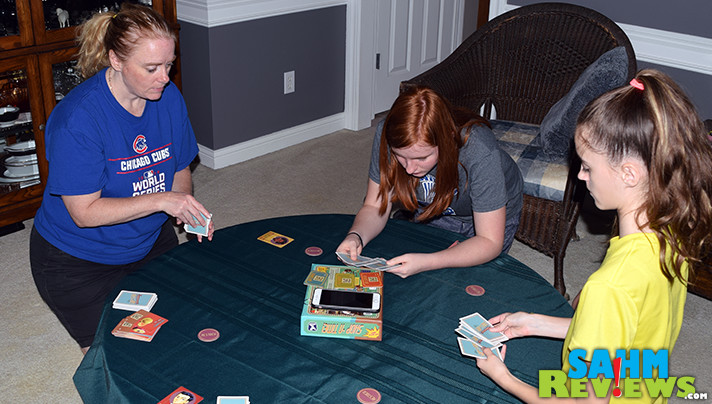 As a youngster I wanted to go on The Price Is Right. When we lived in Los Angeles, my dream mostly came true when we attended a taping. While I never heard my name called, we were lucky enough that my father-in-law was selected to “Come on Down!” Shopping game shows were my favorite to watch and even in the 90s I got a kick out of watching customers race through the studio store in Supermarket Sweep. I’ve always had a soft spot for these bargain game shows so it’s only natural that I would gravitate toward board games of a similar theme. Cue the announcer: “Welcome to Shop ‘n Time!” 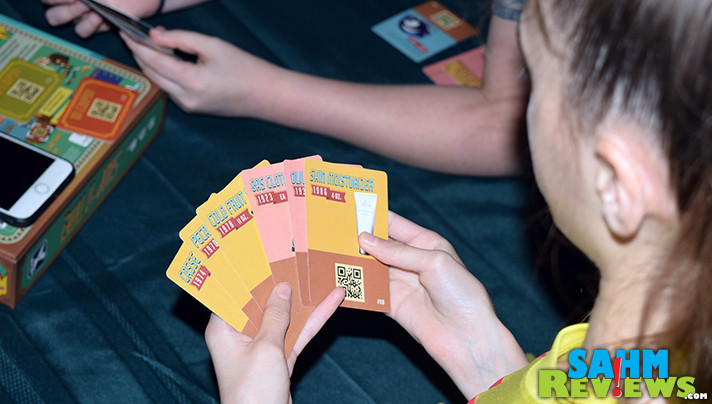 Much like World of Yo-Ho, Shop ‘n Time is a hybrid combining a card game with an element of electronics. Utilizing a mobile device and the Shop ‘n Time app, players act as customers in a magical store where prices haven’t changed over the years. Five pounds of margarine from 1951 and a hair dryer from 1978 cost the same in this store as they did back then. After all players have been logged into the app, each is given seven cards and the shopping is about to begin!. The app will display the target budget and each player will look at their seven cards, select one then pass the remaining to the player on their left. It’s a game of speed (like a rush for the Blue Light Special!) so shop quickly and move along. Continue selecting and passing cards until one player is ready to check out. Everyone else can continue to shop and once all players are done, the checkout process begins.

Utilizing the phone and the repurposed box turned checkout counter, players scan the QR code on their cards. The app tallies who was closest without going over and awards points based on their order of placement. Anyone who goes over their budge is awarded only one point. Play continues for as many rounds as players noted in the app during setup. Once the designated number of rounds are completed, the winner is displayed on the screen. It isn’t available on Mercury Games’ website yet, but you can pre-order Shop ‘n Time on Amazon for $27. Visit the event page on Facebook to learn more about the Shop ‘n Time pre-launch that is scheduled for tomorrow!

This last one isn’t even available on Amazon for pre-order! We have a prototype copy of Zombie Slam and we’re excited to be able to tell you about it because it’s exactly the type of game our kids love. Fast! Like Shop ‘n Time, Zombie Slam is a hybrid game but it’s designed to work with or without the app. We played without the app which limits the options so make sure when you get this that you also download the companion app. In this game, you’re racing to outrun the competition during the Zombie Apocalypse. You know what they say… You don’t have to be faster than the zombie, just faster than the slowest person in your group! In this case, it isn’t just figurative, but literal. Why? Because Zombie Slam is a speed game. Place rooms and supplies in the middle of the table within reaching distance of all players. The number of rooms available is equivalent to the number of players plus two additional, ensuring plenty of diversity in available supplies. Players begin with three supply cards and hazard cards equivalent to the level of difficult selected.

Players must survive four days with each day consisting of 10 rounds of scavenging for supplies followed the Reckoning. To do this, the app (or a player) announces a feature of a supply that is needed. (If you aren’t using the app, there’s a stack of request cards and players take turns flipping the next card.) Requests could be a particular color, a certain quantity or even a specific item. Players rush to slam their hand on any room that has the designated supply on the top of the stack so they can claim those supplies for their own backpack. If you selected a pile that had the incorrect clue, you collect a hazard token which you’ll need to resolve during the reckoning phase. If you were selected the correct one (and the fastest), you get the entire supply stack to use to survive the day. Of course, there’s more to it than simply speed. If the room happens to be inhabited, you also take a straggler token to represent the person you found who decides to tag along with you. It’s your job to equip these stragglers with supplies when reckoning occurs so either avoid strangers or make sure you collect enough for everyone in your party. After 10 rounds of scavenging, players must evade hazards, equip stragglers, fill a backpack, score additional backpacks then encounter another hazard. If you complete all requirements, then you have lived to see another day and the process begins again! If you cannot complete any one of those, the game isn’t over for you! Instead, you become a zombie and the rules put you on the offensive. Ultimately, the goal is to survive the four days and be the person who acquired the most supplies (or if everyone turned to zombies, the one who acquired the most zombie points wins.) If you like games of speed (or zombies), this might be right up your dark, zombie-infested alley. Me? I’ll stick to the shopping game because, well, shopping. Stay tuned to Mercury Games’ social channels and websites for details on when this game releases!

As I mentioned, Mercury Games offers many other titles and they (obviously) have more coming out all the time! We’ll be seeing them next month at Gen Con and hope to find out more scoop on upcoming titles! Visit their website to check out the selection and tune into their social channels (Facebook and Twitter) to hear what else they are rolling out.

Which of these games do you find most interesting?

10 thoughts on “Mercury Games: Fun by the Foot”