Back in September we introduced you to 8-28 by Main Street Card Club. A quick-to-learn card game that reminded us a lot of the casino favorite, Blackjack. In January we followed up with Rock Paper Poker, which turned our childhood hand game into a form of poker. I’m sure you see a theme developing here – take a well-known card game and make it family-friendly to both play and learn. This time we’ll take a look at Rush to Flush, another card game following this line. 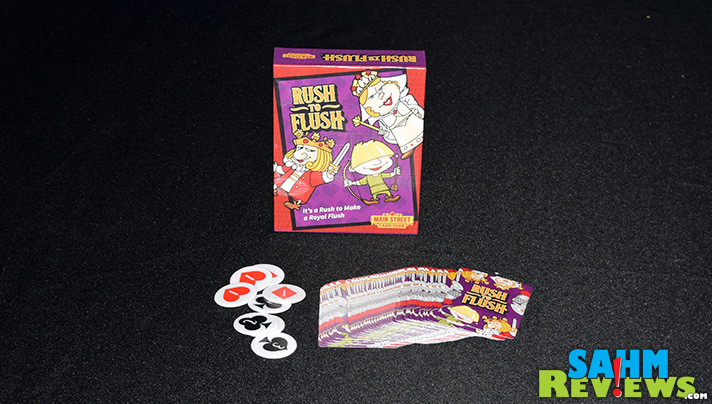 In Rock Paper Poker, your goal was to construct pairs, three-of-a-kinds, full houses, four-of-a-kind or even five of the same card.  What was missing were the more difficult hands like straights, flushes or even straight flushes. Rush to Flush does away with the simple card hands and focuses on just one goal – being the first (or last) to get a straight flush.

The custom deck uses familiar playing card suits but only includes the cards ten through ace. All other cards are absent from the game and two of each suit are represented. There are also a number of “Action Cards” finishing out the 54 card deck. More on those in a minute. 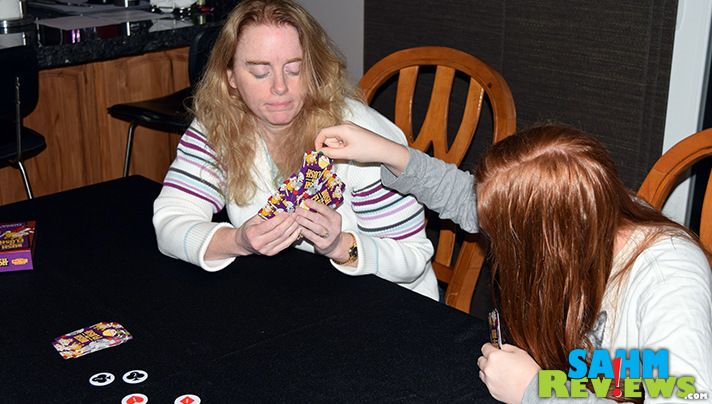 Rush to Flush is played over a number of rounds until either a pre-determined point total is reached or all of the scoring chips are collected. These eight chips (two for each suit) have different scoring values printed on them, making spades the most valuable and hearts/diamonds the least. Any time a player completes a straight flush they are allowed to claim a scoring chip. If there are none in the center (they have already been claimed), they can steal one from any opponent! 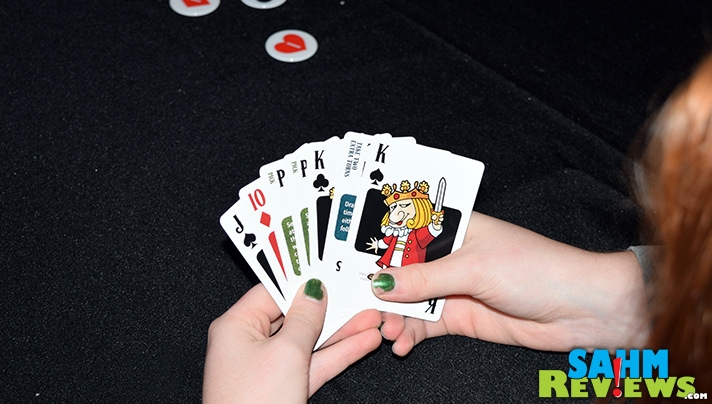 At the beginning of each round, players are dealt a hand of seven cards. On their turn they will draw one from the deck or the discard pile, and then discard one. This means all players will always have exactly seven cards in their hand. When discarding, if you choose to throw out an Action Card, you resolve it right away. This is the only way to play Action Cards. 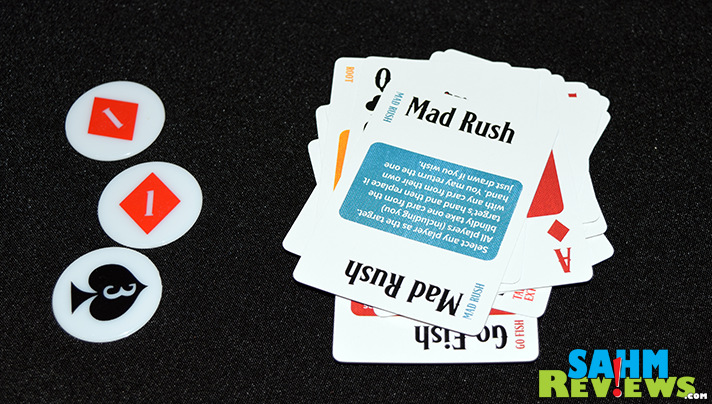 Action Cards keeps Rush to Flush from just being a draw and discard until you win type of game. Throwing some volatility into the round, some have everyone drawing one blindly from another player’s hand and returning one card of their choice. Others have you taking an extra turn or two, while one even allows you look at their entire hand before selecting one to steal! 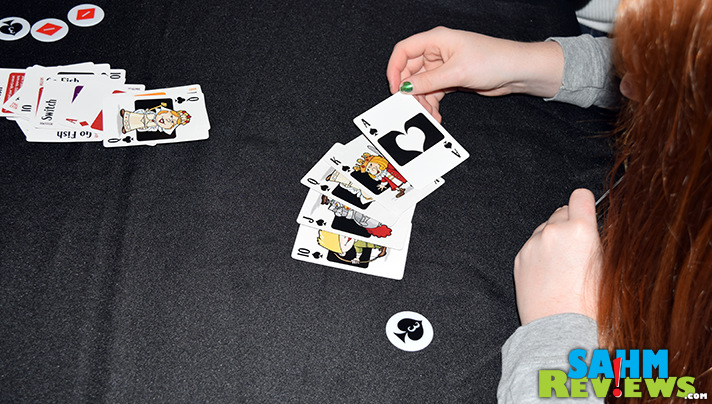 Once someone has completed a straight flush (ten through ace), even if it isn’t their turn, they may lay it down and claim the corresponding scoring token. They become the dealer for the next round and play begins again with freshly dealt hands. Once that final scoring token is awarded, the player with the most total points wins Rush to Flush!

We’re constantly amazed at companies that creatively transform classic card games into something very new and unique. Rush to Flush is a great example of this, taking a part of poker and making it into something the whole family will enjoy. And at under $13 on Amazon, is just as good a value as their other titles.

What will Main Street Card Club come up with next? Watch their Facebook timeline to be the first to know. In a couple months we’ll be bringing you another of their titles, Bluffalo, a bidding and bluffing card game. Wonder what classic game it might borrow from?

What is your favorite classic card game?