I’ve used Expedia to book family travel for a LONG time. Hotels, flights and even a Christmas cruise regularly earn us VIP status with the travel site. Yes, I might save a buck or two by using other sites or booking directly, but old habits are hard to break. But what happened to us this week may have me changing how we book our travel.

We planned a long weekend getaway with the family to St. Louis to attend Geekway of the West, an annual board game convention attracting nearly 2,000 participants. I effortless booked the host hotel through Expedia for the convention dates and even saved a few dollars over the official rate offered by the hotel for those who booked directly! As the dates drew nearer we decided to travel a day early so we could be at the convention at 8am on day one.

But this host hotel was sold out. So off to Expedia to find a one-night solution. They listed the 2-star Red Roof Inn as being within a mile of our final destination, so we booked based upon the photos. What we discovered upon checking in was the worst hotel stay experience we have ever had.

Let’s start with the extremely uncaring front desk staff. I realize not every employee is a gem, so I ignored the handful of reviews that said they encountered rude service. The young female who manned the desk (9:30pm, May 17, 2016) was obviously upset we arrived while she was on a personal call. But she did check us in right away since the documents were already printed. Then we headed to the room. 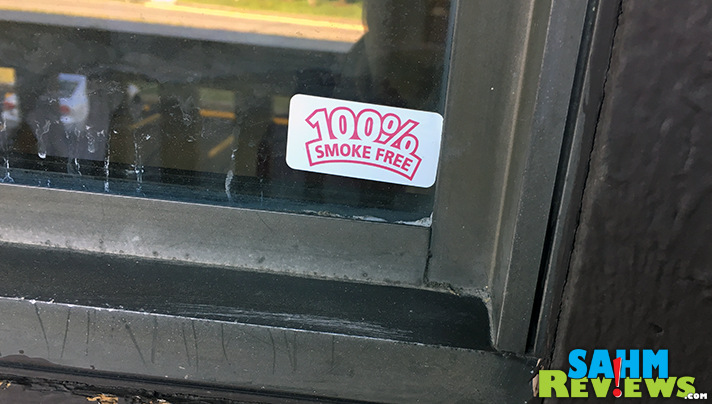 Advertised as non-smoking and proudly displayed on the window, this room had been smoked in on more than one occasion. It smelled so bad both of my daughters said it was making them ill.  Tried to turn on the TV – no remote. Discovered a missing hair dryer also, so I headed back to the front office to ask for a different room. “Sorry, nothing available.” Fine, how about a remote and a can of air freshener? “Sorry, we don’t have air freshener.” This floored me – I have never seen any hotel that didn’t have a method of neutralizing room odors… Fortunately maintenance was able to locate the remote (which was at the front desk). As for the hair dryer? They don’t put them in rooms, you have to check them out and they were already all being used according to this same rep. 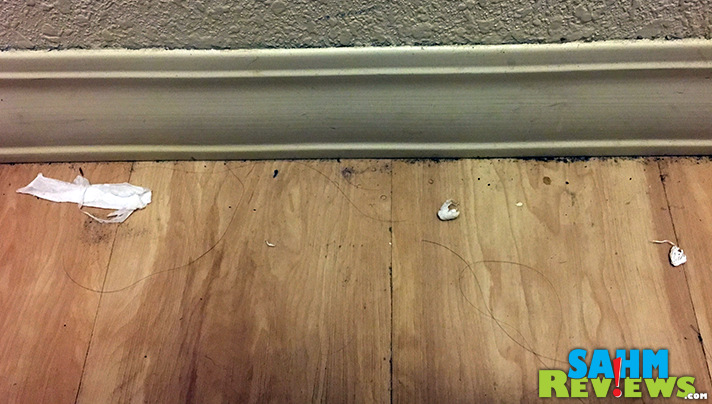 Then I used the bathroom. It was quite small and the door opens almost flushly against the wall. When closing it, this is what you see. USED toilet paper, hair and other grime. Housekeeping obviously goes in to clean the toilet and doesn’t close the door behind them because there isn’t really room to do so. I looked further at the condition of the bathroom and discovered more dirt and something growing around the rails to the tub. 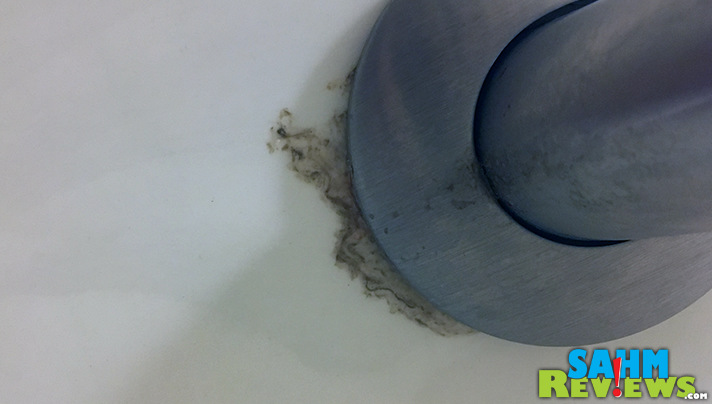 That was enough for me. Knowing I wasn’t getting any further with the front desk I elected to call customer service at Expedia. I have to say the rep I got at Expedia was very professional and caring, even if a little hard to understand. They called the front desk themselves to try to get remedies and encountered the same rude clerk. I really didn’t want to change hotels (an option, but with added expense) since it was now after 11pm and graciously accepted a coupon from Expedia for a future stay (the amount was less than the price we paid for this hotel). 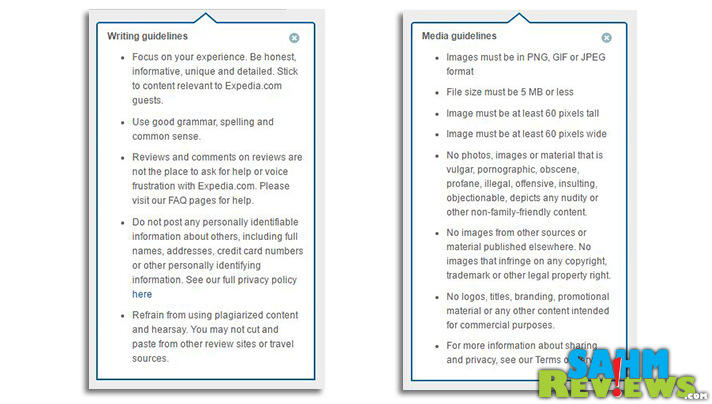 So why am I upset with Expedia when it looks like I received good service from them? At the customer service rep’s suggestion I filled out Expedia’s review form to help warn others of the condition of this property. I was very thorough in my description, paying careful attention to the “Tips & Guidelines” for posting commentary. All-in-all, over 400 words along with two photos. Then I get this email. 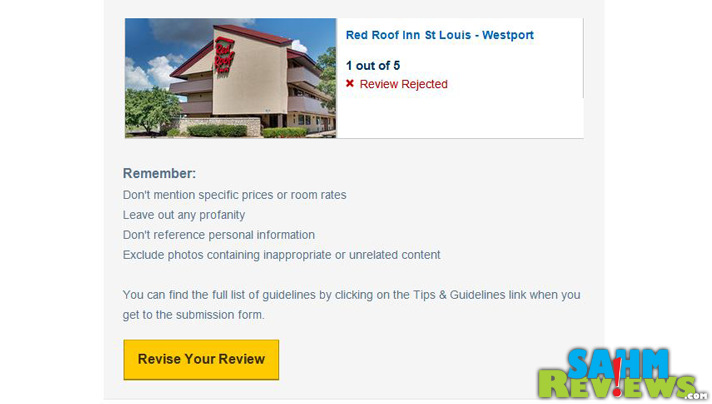 I never mentioned rates, so this couldn’t be the issue. Zero profanity, unless terms like “disgusting” or “horrible” are considered profane. I wouldn’t think of leaving any personal information, so it must have been the last thing – the photos. I included the above two photos of the used toilet paper and the shower rod (sans SahmReviews branding). Apparently the sight of the actual condition of the facility is too much for the eyes of Expedia’s review moderator.

But what makes this whole thing worse is that when you have a rejected review and hit the “Review Your Review” button in the email, Expedia’s site takes you to a new BLANK review page. There is no revision – their idea of revision is to have you re-type the entire thing without exact explanation of what they deemed inappropriate. How many other customers have had reviews rejected with factual information and photos that don’t want to take the time to recreate their work and just move on like I am?

So I will vent my frustrations here without fear of biased editing and let the next unsuspecting person who visits the Red Roof Inn in St. Louis (Maryland Heights) have the same experience. I now have a new view of Expedia’s customer reviews not that I know anything too gross doesn’t make it through their filters. It’s a shame, people should be able to provide factual reports (good and bad) without fear of having their efforts wasted.

In the spirit of full disclosure, I feel compelled to post an update of what has transpired over the past week. Today I received an email that my review was now magically approved (although heavily edited). Photos were included, but are so small most readers will not be able to see the detail like you can in our photos above. 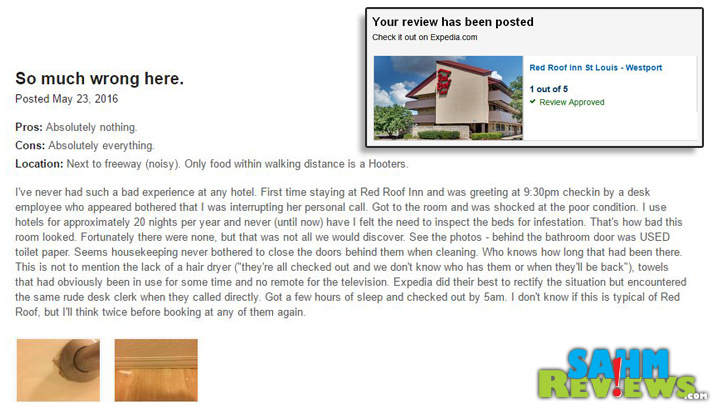 At no point have I been contacted by Expedia nor Red Roof Inn about the condition of the facilities or the moderation policy of the travel site. I guess the fact that most of my words are now live for others to see is some consolation.

26 thoughts on “Why I Cannot Trust Expedia Reviews”