Sometimes I try to come up with a witty title when writing about games. Many times they have inside jokes or hidden meanings only discovered once you read the entire article. My apologies, because this time I couldn’t come up with one better than what Smirk & Dagger Games had already called their famous board game: Run For Your Life, Candyman! 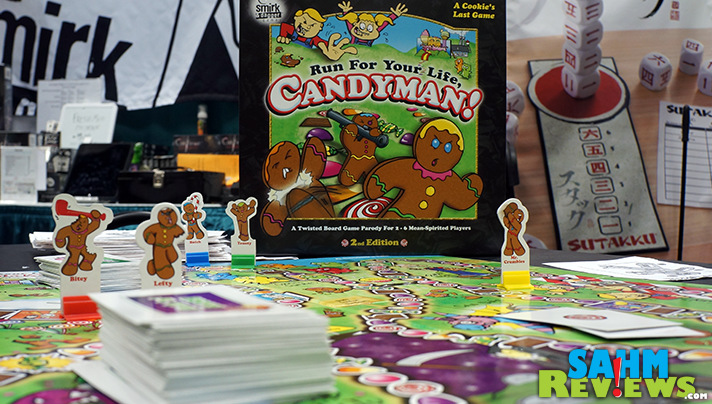 We all have memories of those games we played with our kids when they were first of the age to enjoy board games. You probably broke out Chutes and Ladders or Hungry Hungry Hippos. Or maybe it was Candyland, the mind-numbing trek across gumdrop land. What if you turned it up a notch and made it possible to attack the other players?! And by attack, I mean slowly torture them by biting off their appendages until there is nothing left but an icing-covered torso! That is exactly the premise of Run For Your Life, Candyman! 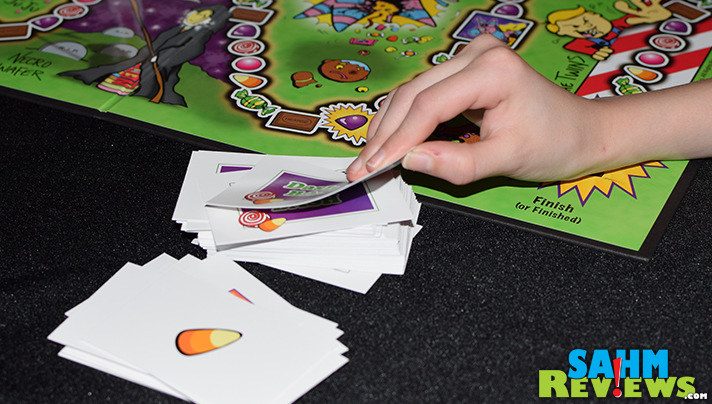 Fortunately learning this game is as simple as the classic. On your turn draw a card and check for candy symbols. If your card has one piece of candy on it, simply move your token to the first space showing that same icon along the path. If the card has two of the same candy, move to the second occurrence of that icon. But if your draw has two different pieces of candy shown, move onto one of them first (your choice), and then on to the second (after the first) along the path. 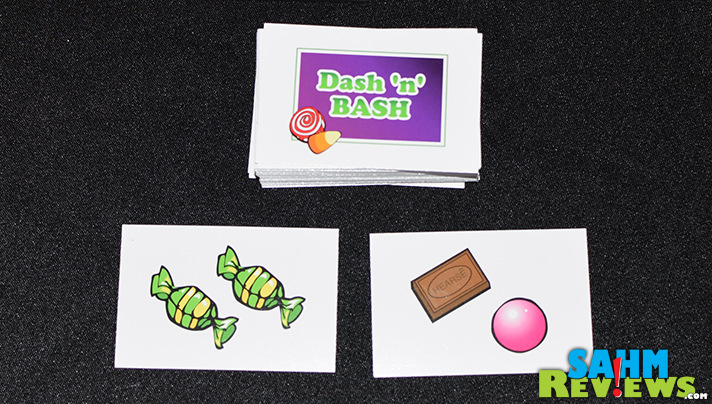 If you draw a candy character, move immediately to the matching character icon on the board. A Candy Cage Match card allows you to transport your token to the nearest candy icon with a burst around it. In all cases, if you land on a bridge entrance, you must cross it and ‘fall back’ to the space linked to the bridge’s exit. 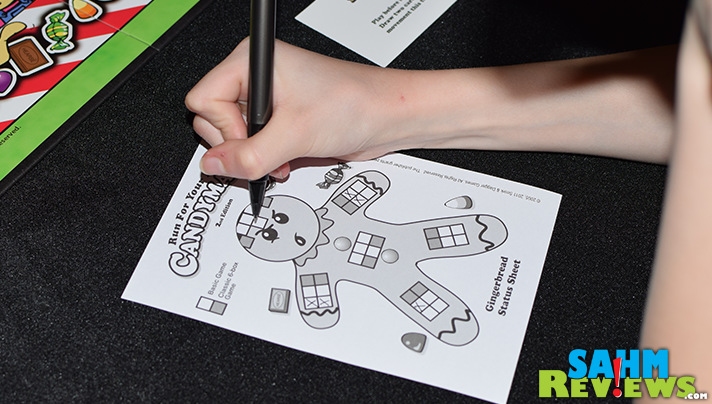 As the rules state, this is not a simple race. “It’s a desperate, no-holds-barred matter of survival.” When you land on or move through a space occupied by another player, combat occurs. The moving player draws another card and the number of candy icons shown determines the amount of damage the other player takes. The type of candy will dictate the area on the body that takes the wound. The receiving player makes marks on their score sheet to denote the hits, and once all the boxes on a particular area are filled, that appendage is lost and is torn completely off the sheet. 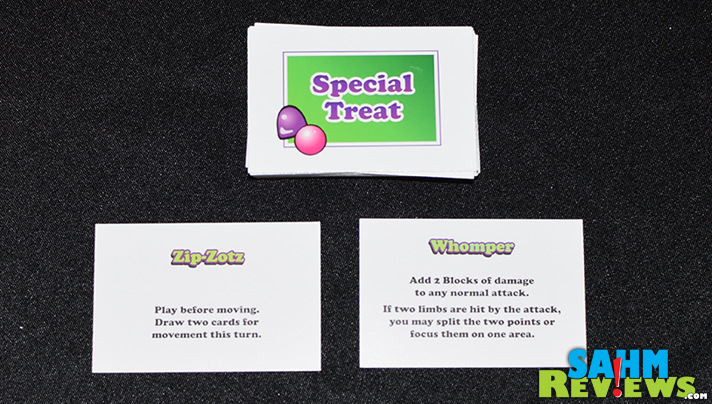 At the beginning of the game a random piece of candy is chosen and circled on your sheet. Any time a player draws a card with that symbol they are allowed to also draw a “Special Treat” card. These cards alter normal combat rules and provide bonuses that can enhance your defense or offense or even change the range in which you can attack! 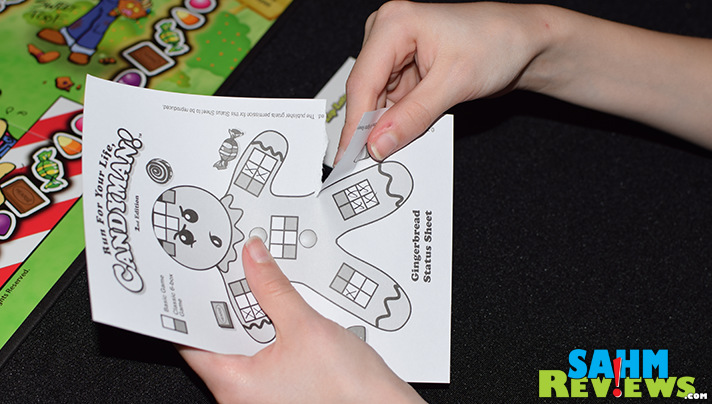 Landing on a burst spot (either by movement or by card) forces a Candy Cage Match. You force any other player to be summoned to the spot you are on and fighting to the death (or until a matching card is drawn). Starting with the player who landed on the spot, take turns drawing cards and resolving damage until a card with a matching icon of the space you are on is drawn. The battle is over at that point and the person who drew it moves to the next matching spot on the board.

The first player to draw the card that would place them on the last space on the path is the winner. But before you get there you must pass the TWINS. The last nine spaces on the board are guarded by the twins and they get to attack you FOUR times each time you land on one of their spots (using the card deck to attack). If you survive and cross beyond the border first, then you are the winner. 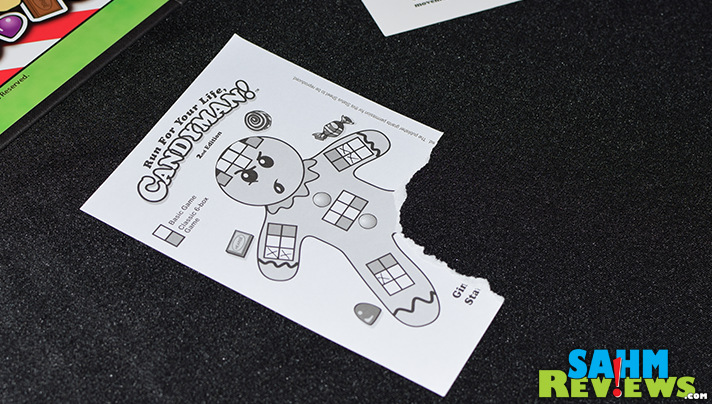 We love the option seen at gaming conventions where a real gingerbread cookie is used for scoring rather than the paper version. There is something oddly satisfying about being able to bite off a piece of someone else’s cookie as reward for finishing off a body part! Smirk & Dagger Games also provides a .pdf on their site for a convenient way of replenishing your stash of score sheets. 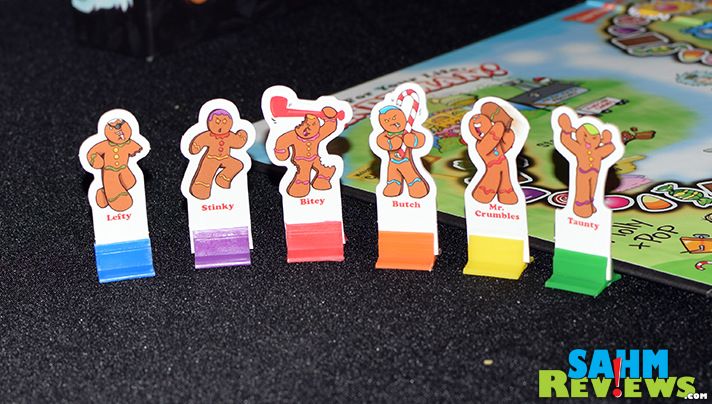 Any family that enjoyed (or didn’t) Candyland needs to experience the thrill of Run For Your Life Candyman! Available for under $30 shipped on Amazon or directly from Smirk & Dagger Games, even though it is rated for ages 14+, I would not hesitate to allow younger (mean-spirited) players to take a crack at it. Especially if you’ve taken the time to make some real cookies to go along with a round or two! As always, check out Smirk & Dagger’s Facebook and Twitter timelines for new release announcements and maybe even a coupon code or two!

What game did you used to love as a child, and now HATE?!

22 thoughts on “Run For Your Life, Candyman!”