If you’re Catholic or have ever attended a Catholic mass, you totally get this and you’re probably (hopefully) laughing. If not, just laugh. It’s okay. Talking about religion is a difficult subject for many people and that’s what The Real O’Neals, the new comedy on ABC, is aiming to do. Not just bring up religion, but other matters as well such as divorce and homosexuality. More specifically, Executive Producer Casey Johnson explains they are using comedy to share “a coming-of-age story about a gay teenager.”

Wait. What? Who in their right mind could think a show about a homosexual kid struggling with adolescence AND coming out would be funny? Ummm… me. And just about anyone else who has watched The Real O’Neals. It’s no different than me laughing about Catholic Calisthenics. There are some things that are easier to understand and relate to when they are watched through rainbow-colored glasses. Jay R. Ferguson who plays the patriarch on the show explained it so eloquently, “You can really change hearts with laughter… I’m a firm believer in that philosophy.”

Let’s take tonight’s episode (104, The Real Book Club) as an example. While mom, with the help of the her daughter Shannon are struggling to keep Eileen’s judgy book club under control, Kenny is having quality time with his dad. They set out to discover Kenny’s perfect gayborhood hangout, a coffee shop. (Our gamer readers will enjoy the shout-out to Catan by Mayfair Games.) In the process, they meet an all new group of friends and even play gay dodgeball. Who knew there was such a thing? Noah and Jay shared some interesting comments about the filming of that scene. They said it has been one of their favorite scenes to shoot. When asked how many takes he got hit in the head, Noah explained that the one main scene where he gets hit is CGI. But they joked around and he encouraged people to seriously hit him. Noah said, “Just do it you guys.  Like, it’ll be hilarious.  Just do it…” then followed with “All the crew guys, they’d be like, ‘Grab two balls, we’re not gonna tell them.’  And then they started like chucking like 20 balls at us.  And one guy was just like…” “…like rapid fire dodgeball.” Jay completed Noah’s sentence. They both laughed. A lot. And so did we since the gay dodgeball part of the episode is just as Noah said it would be: hilarious. The episode makes you realize that awkwardness and insecurity can be found everywhere and how you decide to tackle it can make all the difference. 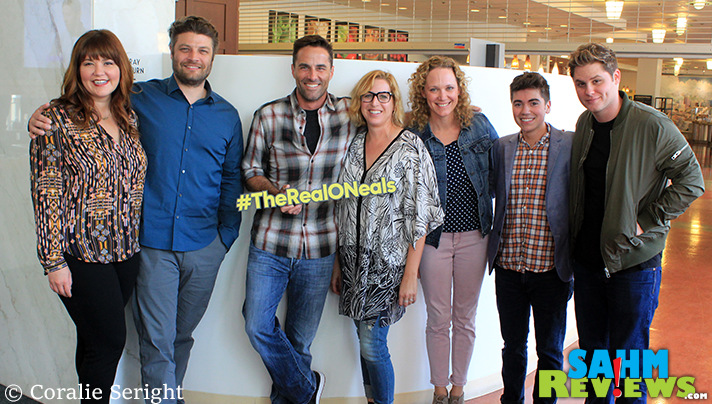 Don’t think these ideas are coming from random imagination. The show utilizes a diverse team of writers, including five or six gay writers and several Catholics along with Executive Producer Stacy Traub who allows her personal history of divorce (and being the child of divorce) to be exploited for the benefit of story development. Then there is Executive Producer, David Windsor, who was raised by two gay fathers in a time and place where that wasn’t seen as normal. To say the team of writers have a wealth of personal knowledge by which they can “change hearts with laughter” is an understatement. They’re talented and they are extremely funny. 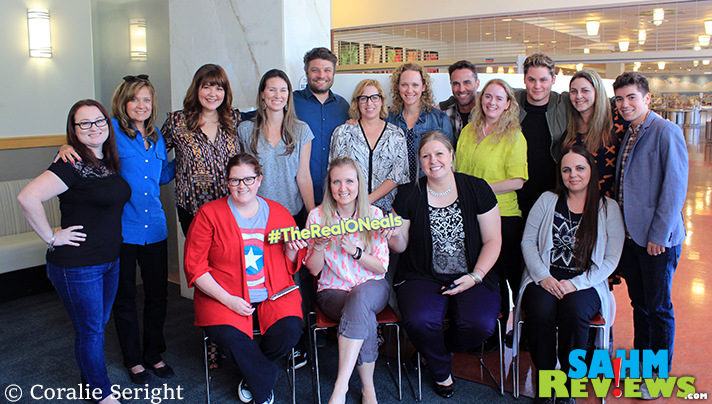 But even a perfect story cannot work without talented actors bringing it to life. If I were to guess, I would have figured that Kenny, the gay adolescent played by Noah Galvin, was the first person cast for the role. He wasn’t. It was Bebe Wood (the young, feisty sister Shannon), then older brother Jimmy, (played by Matt Shively) followed by Mary Hollis Inboden who plays Aunt Jodi. Following that, they cast Martha Pimpton (the mom), Jay R. Ferguson (the dad) and of course, Noah Galvin. Noah said it was two months of grueling auditions to earn the part. He wasn’t given it. “Once I got it, I got it.  And I think the decision for me then was like choosing to come out and be an openly gay person playing this gay character.” 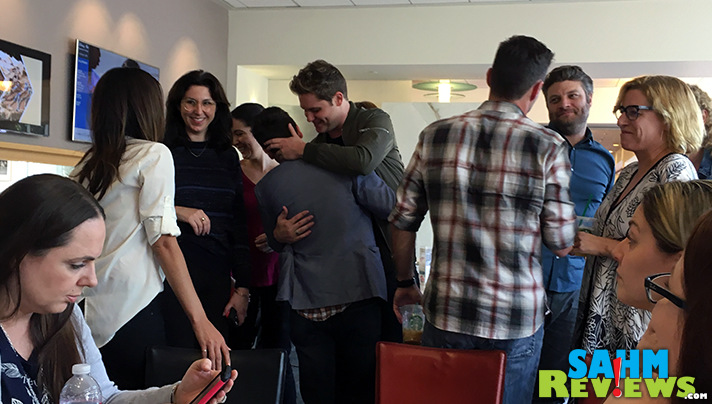 Despite being cast separately, the unity of the cast is extremely apparent. As they arrived for our meeting, we watched them embrace each other like they hadn’t seen each other in years. During the interviews, we consistently heard how much they clicked and were like family. On Christmas, they were all in different places with their real life families. Mary painted a pretty vivid picture of how well they mesh, “I counted all of our text exchanges back and forth and it was like 210 text messages we sent on Christmas day.  We’re all with our families.  I’m in Arkansas with my family, Noah’s in New York, Martha’s in New York, Bebe lives in Kansas City, and we’re all spread across but like 210 videos and we were all together.  And it’s been like that from the beginning.”

Of course, the subject matter is serious in and of itself yet the show manages to make it hilarious. Adolescence is awkward for anyone and that’s often the angle they take, just from a different viewpoint. When I asked what his humanitarian projects were regarding this very personal subject, his answer surprised me. “I don’t have any interest in being like this spokesperson, poster child for anything.  But I also wanna be able to extend myself… I’ve had a couple of kids come out to their parents, like, during episodes.  One kid was like “I just watched your episode and drove over to my parents’ house and came out.”  Like, cool things like that.” Someone else asked if he thought it was easier for them and he responded, “I’d say it gets easier and easier every day, you know?  And I’m, I’m hoping that a show like this can, again, normalize things like that.” After our interview, Noah commented that he directs individuals to organizations such as The Trevor Project.

Ultimately, the interviews confirmed what I already knew: The Real O’Neals is a hilarious comedy built on the foundation of sensitive subjects. Just like it’s okay to laugh at Catholic Calisthenics, it’s okay to find light in other difficult matters as well. The sooner the conversation becomes acceptable, the sooner the reality of it becomes acceptable. Once again, Jay stated it best, “…once you can laugh at yourself, it, it opens you up to acceptance and realizing that we all really have probably more in common than we do different.”

What taboo subject do you find easiest to discuss when laughter is incorporated?

7 thoughts on “Exclusive Interviews with The Real O’Neals”