If you’ve read my blog before, you have some idea that Miss M is a tech-geek while Miss K is a girly-girl. Miss M could get lost for hours and hours in a video game if we let her. Miss K, on the other hand, would play dolls, dress-up or kitchen non-stop with anyone willing. There are a few areas where their likes converge, but even then, their distinct personalities shine.As an example, they both enjoy playing with their Nintendo DS, as well as the Wii. However, when they play games, Miss M likes to dive into the actual game or the mini-games while Miss K is perfectly content dressing… and redressing… and changing her avatar… before she begins the game then again… and again… once she has a game going. 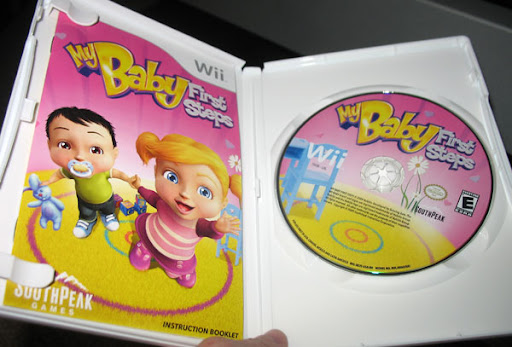 So when I was offered the opportunity to test out “My Baby First Steps” for the Wii, I figured it would have something to offer each of the girls. The goal of the game is to teach and nurture your baby through a variety of activities and lessons. It has game qualities that would appeal to Miss M and definitely fashion-friendly options to appeal to Miss K.

When we popped the game in, Miss M was the first to try it out. It was fun watching her choose what her baby would be like. Boy, girl, surprise. What nationality, what color hair, what color eyes. Then she got to name the baby. It was really cute to see how excited she was when the baby first showed up on the screen and was ready to play.

But she was ready to play and the game kind of wasn’t. Upon creation of the baby, the game runs through an introduction process where two virtual characters, Clara and George, take turns talking about the game and how to play it. While I thought it was helpful, it was a very slow process. Worse, is that you had to sit and read it all. It would have been much more entertaining (and much faster) if these characters were vocal. I’ve found this trend in a few different games lately so it isn’t a flaw in this particular game, just something that I think could be done better. Thank goodness we didn’t start with Miss K because she has a tendency to just click through all the verbiage so she can get right into the game. Unless you’re trained in speed-reading, trying to get the instructions while a trigger-happy child is holding the remote is nearly impossible.

Once you get past the intro and into the actual game play, it’s much more interesting. That’s when the interaction begins and the parent begins to influence and teach the child. For example, using a stuffed bunny, you can coax your child into walking. The pointer on the screen changes based on the function and when a hand is displayed, you’re able to pick up, tickle, caress or hold their hand to help them walk. Gradually, the child will learn more and more – a word here, another word there. Art imitating life.

But just like in real life, the baby is going to get bored doing the same thing too long – or doing the wrong thing. When Miss K had her turn, she pretty much was ready to be done with the game once the baby started crying. Then I reminded her that the baby didn’t want to just walk around chasing the stuffed bunny. She needs sleep or maybe to have her clothes changed. Not only is there a feature for changing clothes, but also an opportunity to shop for new clothes and accessories. That was right up her alley… so she was happy to continue playing at that point. 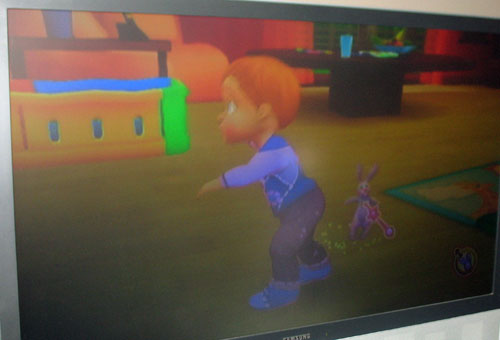 While the girls enjoyed the game, I see a few major design flaws. The package says it’s a one-player game. Typically, that means that only one can play at a time. In this case, it only allows you to create one character. I didn’t realize that, so when it came time for Miss K to create her character, we couldn’t. Then Miss M was upset that her sister was going to be playing with her baby. That makes this a great game for a single-child family. If there are multiple siblings, then everyone needs to sit down together and agree on everything when first creating the character. If the designers create a My Baby First Steps #2, they should consider allowing multiple character creation as well as the ability to make it a 2-4 player game featuring play-dates when a certain developmental stage is reached. My girls realize now that they’ll be sharing the character but in the beginning, I didn’t make it clear so it was a rough start. 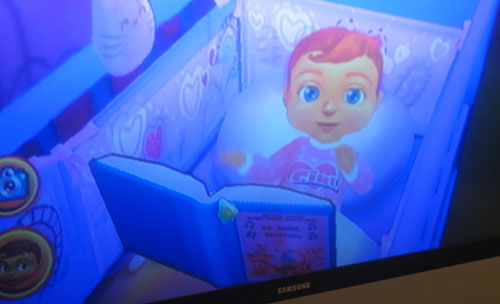 What about the game itself? Did we like it? Both the girls seemed to enjoy the overall idea of it. Since we have limited game time, they haven’t opened up all the different possibilities yet but that’s okay because we don’t want them to finish a game in a day. For example, they are able to shop for and dress the baby, as well as read it to sleep but they can’t feed it yet. (Or at least we haven’t figured out how.) We also haven’t started teaching shapes or colors although the game does allow it. The game will continue to open up additional options as the baby grows into them.

Is it a hard game? Not really. It’s a simple idea with many layers to it. It’s unstructured to accommodate various types of play – such as the differences with game goals that my kids have. It isn’t one that is so easy that older kids would be done with it quickly yet it isn’t so hard that little kids can’t play it. With Miss K, who is 5, she needs someone to read the instructions to her, but once she knows how to do a particular activity, she’s good to go.

Would I buy this for my kids? We’re playing the Wii version of the game, but it’s also available for the Nintendo DS – which I would put it into the category with the other ‘training’ games. Yes, I’m putting My Baby First Steps in the same category as Nintendogs. It’s the same theory with the same ‘what you put into it you get out of it’ results. The character, whether child or dog, will continue to learn as you teach it more. I realize you can’t realistically compare a dog and a baby but for the sake of the game programming, it makes sense – at least to me. Either way, my kids will learn the principle that they need to have some dedication to the character in order to continue to advance in the game.

Although I haven’t seen the DS version, I think it’s probably the better of the two platforms. My Baby First Steps on the Wii is neat, but it’s not a graphically intense game that needs a full-service gaming system to get the effects. Plus, the DS utilizes voice recognition which is a cool added feature. 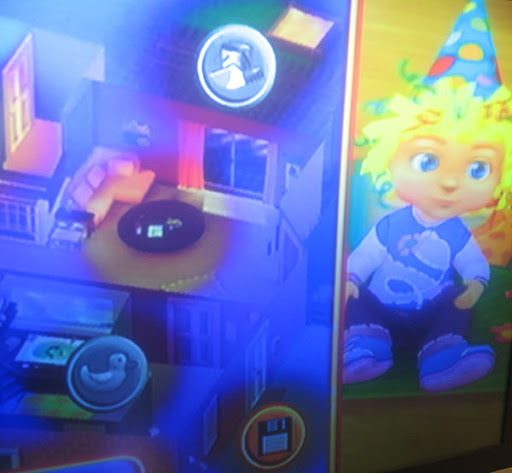 Don’t laugh, but the one thing that struck me as funny (although it doesn’t affect the game play) is the save feature. On the navigation screen, where you pick between the various activities, there’s a diskette. Seeing as our kids haven’t the faintest idea what a diskette is (in real life), I had a difficult time explaining that’s how you save the game. I’ve noticed it on other games, but not one geared towards little kids. Then again, you can CC an email and we all know good and well that there isn’t carbon anywhere in the transaction. Maybe it just made me feel old and that’s why I noticed it. No harm… the kids know now that’s how to save where they are at.

Overall, what did I think? It’s a nice change of pace and has room to introduce some real-world concepts into young lives. If your kids are enjoying the other training games, this one is worth looking into.

3 thoughts on “Yes, I Compared the Baby to a Dog”