I’m really not the imaginative type. Miss M enjoys non-stop Littlest Pet Shop theater while Miss K can lose herself in Barbie and Polly Pocket. But when they ask me to join in, I just don’t know how to play. Sounds silly, but Miss K likes to keep things going in her direction – she’ll say “It’s this one’s birthday so you take that one and that one and we’ll have a birthday party.” Then I try to play along and she tells me I’m not doing it right. I try to play, but I’m just not good at it.

So whenever the girls ask me to play with them, I immediately suggest a game. Any game. Or even a puzzle. My goal is generally something that has structure, rules and more important, a potential end that doesn’t make me want to watch the clock constantly. Seriously… I love playing with my daughters but my attention span is about (this) long.

Gamewright sent me a list of the games they released for summer and allowed me to select a few to test out with my girls. There were several that sounded great but were a little above their age range. I ultimately decided on Say Cheese!, Ring-O Flamingo, Can You See What I See? and Too Many Monkeys.

So what did I think of them?  Here are some of the highlights (as well as lowlights if I felt any) about each of the games.

I’m a big fan of games but traditional games leave us crying for space.  Two of the games we received were virtually the size of a deck of cards.  The small plus entertaining combo makes these a huge hit!

Say Cheese!: It’s a fast paced game consisting of cards and dice. The pictures on the dice reflect various characters on the cards.  Roll the dice as quickly as you can and compare what you roll to what is on the cards.  If the two characters on the dice matches the two on either of the cards that are showing, then you yell “Cheese” and grab the card.  Flip over another card and everyone starts rolling again.  If you match both cards, then you yell “Double Cheese” and grab both cards.  Continue to flip and grab until all the cards are claimed.  Person with the most at the end wins.  It’s a super fast game but crazy and a lot of fun.  It’s one of those games that you can just tell was inspired by a college-level beer drinking game.  Worth the price of admission? Absolutely. Too Many Monkeys: This game involves a deck of cards where the goal is to attain the numbers 1-6. Everyone starts with 6 cards facing down and taking turns, you attempt to get them all flipped upright.  In the same style as gin (the game, not the drink!), you can draw from the stack or from the discard pile.  If you draw a 4, you replace the 4th card in your row and unhide the new number.  If it’s a 3, you replace the 3rd card in the row and continue until you duplicate a card or flip a card that halts your turn. Sound complicated but it’s not… Miss K (4 at the time we received the game) followed along just fine. 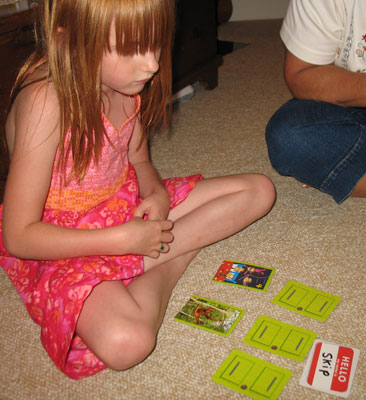 There are “Skip” cards that allow some strategic play but for the most part, it’s luck of the draw. When someone flips all their cards, they begin the next round with one less while their opponents keep 6 until they win a round. Each round is pretty fast paced but if you have a large number of people playing, it takes an unbelievable amount of time for someone to win 6 rounds.  Worth purchasing?  If you have more than a few people who will play. While it is a time consuming game when you add more players, it isn’t nearly as much fun when only a few are playing.

Of course, traditional boxed board games are cool too but I guess I wouldn’t classify these next two as board games. Boxed? Yes. Board? No. Bored? Definitely not. 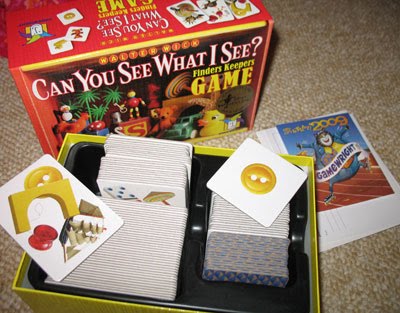 Can You See What I See? Although this is a boxed game (smaller than a traditional lunch box), it is just a bunch of I Spy cards. Two sets – The “Keep Me” cards and the “Find Me” tiles. A designated number of the larger “Keep Me” cards with the collage of items are handed out to the players face up. The smaller tiles each contain one item that can randomly be located on the “Keep Me” cards.  One at a time, the “Find Me” tiles are flipped to reveal an item and players scour their own cards for that particular item. Each of their own cards that contains the item gets put into a pile. When someone gets all their cards, they win. That’s the version for the little kids – there’s a more difficult setup for older kids. 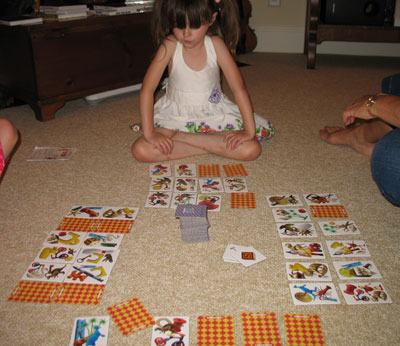 The girls really enjoy this game, but I feel like they are too advanced for the easy version and not quite ready for the harder version.  I’m giving it a little time and plan to reintroduce it at the more difficult stage to see how they do.  Would I buy this? Possibly. It’s best for someone with kids around 4 who like playing a good game of search and find.  On the flipside, it would be very fun for a family with kids 7 and up who can strategically think through the “Expert” level of it. 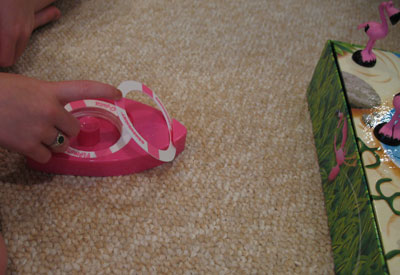 Ring-O Flamingo:  This game will cure you of any desire to play carnival games at the fair.  Using a launcher, you attempt to ring a flamingo.  Once you get the hang of how to launch the rings, it’s less frustrating, but being good at launching doesn’t guarantee you’ll win.  Bonus points go to the first person to ring any given flamingo so someone who is accurate at landing several ‘firsts’ can easily pull ahead of someone who rings lots in the same place. It’s fast paced and appears messy but is a quick cleanup and easy to immediately start another game. 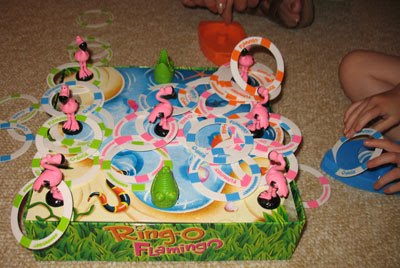 My only complaint with Ring-O Flamingo is that the glue used to hold the flamingos onto their base isn’t strong enough. One of the flamingos came loose on our very first time sitting down to play.  No biggie though as it’s something that super glue could easily resolve.  Seriously, that’s my only complaint about it… except that I’m consistently inconsistent.  One game I could be right on the money with most of my launches and the next, they’re flying across the room.  Guess that’s half the fun.  And it’s way cheaper than a carnival game.

3 thoughts on “I’m All About Structured Play”