Last year for DH’s birthday, we planned a short family vacation.  I made reservations at a German restaurant and attempted to plan a special birthday ‘cake’ for him.  We used to enjoy Eli’s Cheesecake before moving to Los Angeles but the store here in Iowa that carried it has since gone out of business.  Since our vacation spot was in Wisconsin and within the Eli’s area, I figured the stores there would likely carry his favorite flavor – Eli’s Chocolate Chip Cheesecake.But shy of calling all the stores or driving around, I didn’t really have a way to locate the cake of choice.  So I contacted Eli’s directly.  Their staff took the time to look up which stores were on their delivery list and where I could shop to get our Eli’s fix.  Customer service like that is hard to come by these days.

Prior to that, the last time we enjoyed Eli’s was when DH had some shipped to his company in Los Angeles.  Unfortunately, awesome cheesecake has a very short shelf-life when surrounded by a ton of employees.  DH managed to set aside a few pieces to bring home… probably because he knew he wouldn’t get back into the house without it.  Smart man, I tell you.

Even this past spring, we even drove from store to store while visiting DeKalb, Illinois – once again in search of a store carrying Eli’s Chocolate Chip Cheesecake.  It was a last minute idea so we didn’t have the opportunity to inquiry with their customer service department like last time.  Alas, we didn’t find what we wanted and were totally disappointed.  It’s just one of those things you look forward to.

So as BlogHer09 approached, I raved (to any non-Chicago person that would listen) about how awesome Eli’s is.  It’s one of those must-experience things about Chicago.  I did things like telling friends via email.  When someone on Twitter asked for dinner recommendations, I suggested they just pick up an Eli’s cheesecake and make dinner out of it.  How do you think Eli’s responded to this?  They contacted me directly and offered to supply Eli’s cheesecakes for an event we were having on the Wednesday night prior to BlogHer.  How on earth could I resist such an offer? 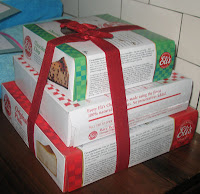 They shipped a Cheesecake Tower and a Tira Mi Su for guests at our event to share. I was never a fan of cheesecake growing up, but after trying Eli’s Chocolate Chip Cheesecake at the Taste of Chicago after meeting my husband, I was a convert. It became my favorite. The tower contains a plain cheesecake, a chocolate chip cheesecake and a turtle cheesecake. Eli’s has several other flavors, like Triple Chocolate, that make my head spin and my mouth water but those weren’t among the ones at our party. But that’s okay because the tower by itself was delicious and way more cake than we could eat anyhow.

But I guess what really impresses me is the customer service at Eli’s. Sure, I’ve blathered along about products I love before – either here or on Twitter. But seldom do they contact me to say they love hearing how much I enjoy their products.Eli’s is a small company with a big heart… and awesome food.  Please check them out at their website, their blog, on Facebook or even on Twitter.