For many years, our viewing habits have fallen into one of three categories: 1) Something on the DVR, 2) Random reruns of anything from Bonanza to The Big Bang Theory or 3) News. Seldom did we channel surf looking for new shows to watch. If it was something on our radar then we added it to the DVR and watched it when we had time. (See option #1 above.) Ever since we cancelled our DirecTV service, we’ve been leaning more on many different streaming services available. We’re longtime patrons of Netflix (anyone else remember their mailing service, rearranging your queue when something new was released then hoping it showed up in the mail?) and are in the Disney+ Founders Circle. In the past couple of years, we have since added AppleTV+ and Paramount+ (formerly CBS Interactive) to our list. Between all these streaming services, we’re finding plenty of gems to watch.

One of the best TV shows I’ve seen in a long time is Ted Lasso. Filled with positive messages in the face of adversity, it’s something every person should watch. A couple weeks ago, we started watching Big Shot on Disney+ and it’s the complete opposite coaching style from Ted Lasso. It’s about a basketball coach (John Stamos) who was ousted from his long-running, highly successful job as an NCAA coach and accepts a position as the head coach of the team at an elite all-girl high school in Southern California. He has an attitude, but it’s nothing like the chipper football coach we all love. Check out the trailer to get a taste:

The cast includes seasoned actors including John Stamos (you know, Uncle Jesse on Full House), Jessalyn Gilsig (Glee) and Yvette Nicole Brown (Community, Mom) but is packed with young talent. I was working on setting up some interviews and the publicist asked if I was interested in connecting with anyone in particular. While we weren’t able to finalize the details before publication of this article, I realized that there wasn’t one specific member of the team with a role that is standing out from others. It’s very balanced between different types of personalities that seem very aligned with those I witness at my daughters’ high school. Boisterous, confident, sassy, shy, flirtatious, confused and overwhelmed are a few of the characteristics that you see in these roles and it works because it’s real. You see people being petty, others being bullies, and true cheering sections both on the court and off. 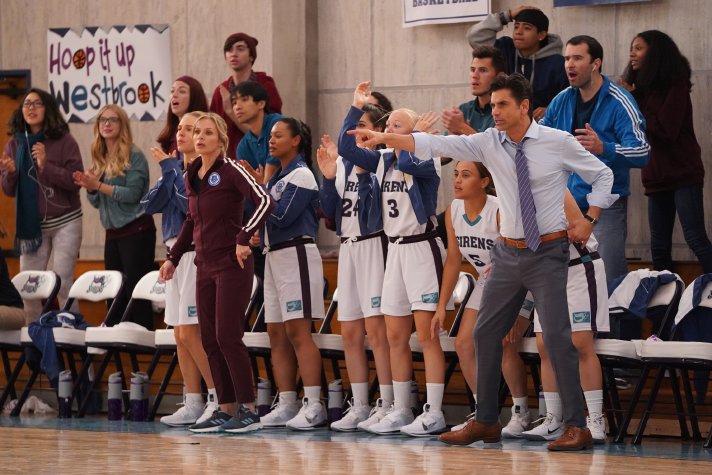 Beyond all that, the show is about a coach. Someone who is an exemplary example of a perfectionist, win-at-all-costs jerk. As I said, it isn’t Ted Lasso, but it works in a completely different way. That’s because there’s more going on that meets the eye. The show is about growth, learning and about being who you need to be, even if it means people don’t like you. But it’s also about looking below the surface because you cannot judge someone unless you’ve walked in their shoes. 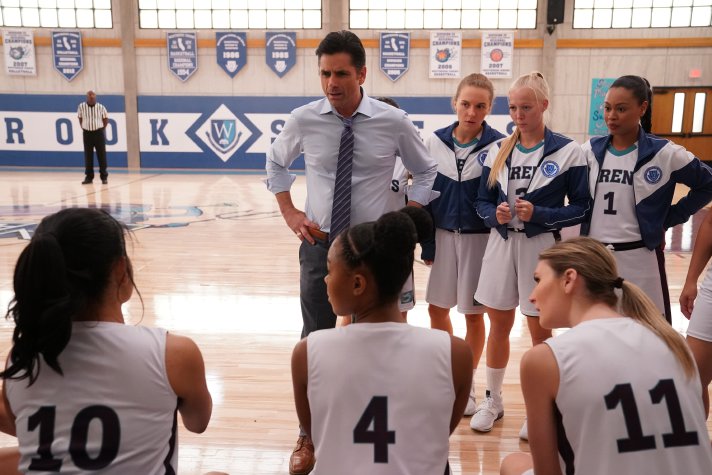 I fully expected to dislike Coach Korn as much as I like Ted Lasso, but I was wrong. His character is that of a flawed, but admirable individual. As his character continues to develop from one episode to the next, I’m enjoying how they are showcasing the relationships he is developing with the principal, assistant coach, counselor, teachers, students and even his daughter. As the parent of two high school daughters, I know it isn’t easy to navigate through their emotions, hormones, stress, struggles with class workload and so much more. There are a lot of lessons about life in Big Shot which is part of what why you should tune in.

Have you watched any episodes of Big Shot yet?

20 thoughts on “What We’re Watching: Big Shot on Disney+”