After a long drought, it seems we’ve been finding a lot of Scrabble-like games at thrift. Two weeks ago it was Akumulate, a polyomino-based tile game which used numbers instead of letters. Last week we were playing Plext. It was unique in that you could substitute any number of letters in between the ones you were required to use in order to form as few (longer) words as your opponents.

This week we happened across another older Scrabble-branded word game, Ipswich. We’re not sure about the origin of the game’s name – the only thing we could find was a city by the same name in the U.K. that also boasts an official Monopoly version and a game about their football club. Maybe this game was invented in Ipswich? We’ll probably never know. 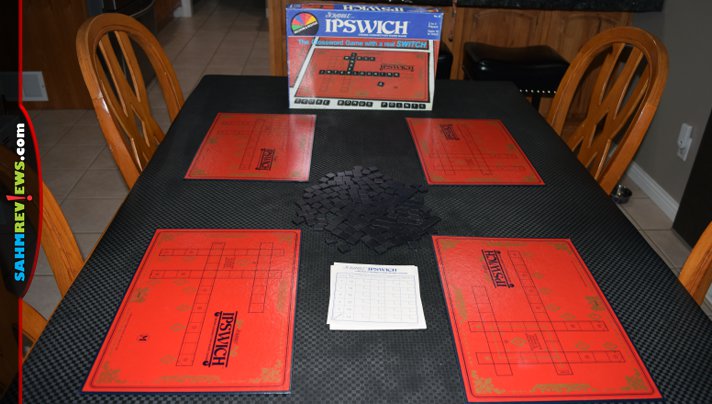 Most board games feature a large board that is placed in the middle of the play area. Ipswich is different – there is no main board. Instead, each player gets their own large player board. They are identical to each other except for one which displays a printed “M”, denoting the “Master Board”. This fancy name is simply to denote the start player for the round.

To set up the game, place all 153 black letter tiles into the included bag, give each player a board and assigning the duty of scorekeeper to one person. For the first round, each player, beginning with the person having the Master Board, will draw 14 tiles into their personal pool. In turn order players may trade any letter tiles they do not like by setting them aside and drawing a new one. A two-point penalty is assessed for each tile exchanged in this manner, which is recorded in the small box on the bowling-like score sheet. A round is 10 minutes long and you are requested to use any convenient timer (which in 1983, the year this game was published, was probably a kitchen egg timer). 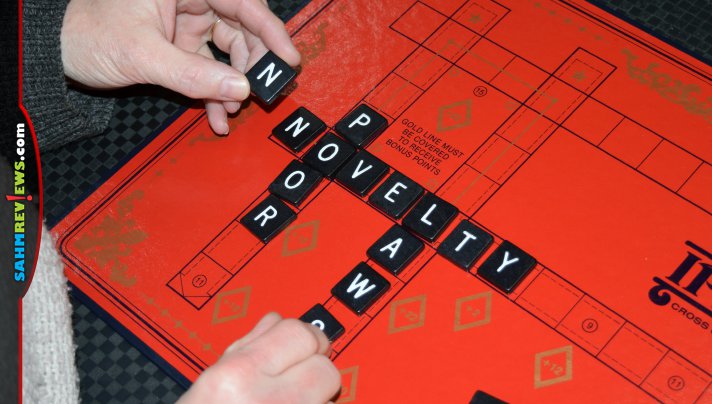 The player boards feature a crossword-style layout and have specific requirements on where you can play words and how many tiles are needed to earn bonuses. You must play a word in the long horizonal line in the middle of the board and it must begin in the first space on the left. The longer the word, the more bonus you may earn. Two vertical words may also be played, which intersect the first horizontal word. They must intersect in order to play, so make sure your first word is long enough.

An upper horizontal line is also available and may host one or two words (two words must be separated by a space). They also follow the same requirement of intersection with the vertical words. At the end of the round, all players will receive one point for each tile they used, counting intersecting tiles twice. Unlike regular Scrabble, in Ipswich all letters are worth the same value. 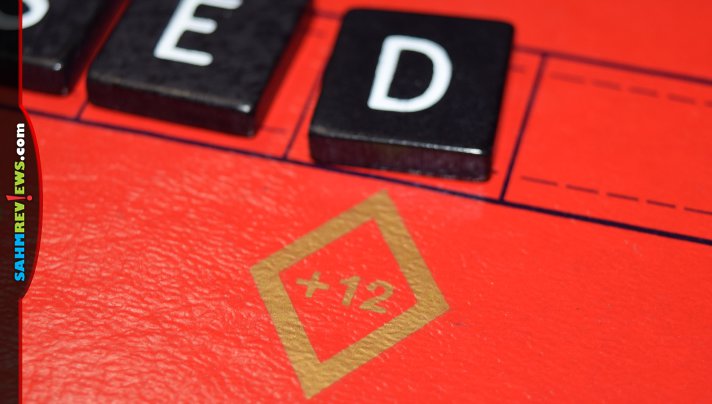 Bonuses are also scored at this time. The length of your main horizontal word will score points, as will the two vertical words. If you cover all the squares in the box created by the four words, an additional bonus is awarded. These bonuses can be worth quite a bit, so it seems the best strategy is to go for them instead of worrying about using all of your tiles. 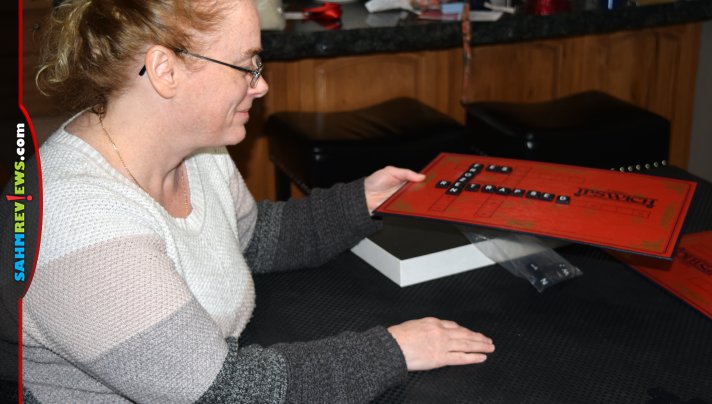 Ipswich is played over five identical rounds. At the end of each round all players will retain any four tiles from the ones they have in their possession and shall also draw two more from the bag. The remaining tiles and the board are passed to the player on the left. Each round you will be playing with two additional tiles, up to a maximum of 22 in the final round. There are no limitations on reusing words, so be careful about what you keep and what you pass to your opponent!

After the completion of the fifth round, the player with the highest overall total wins. If tied, a sudden death round is played only by the tied players and with a brand new pool of 14 tiles. If still tied after this new round, proceed to a second round as in the original game with two new tiles, retaining four and passing boards to the person on your left.

We found Ipswich to be an interesting variation on the game of Scrabble, but one that doesn’t offer a lot of replayability. The fixed boards, both in letter placement and bonuses, bored us quickly and the game seems designed as a solution to a problem that didn’t exist. We imagine an executive at Selchow & Righter demanding a game that functioned like a true crossword puzzle and the in-house designers struggled to come up with this. If you must have one for your collection, there are copies regularly available on eBay!

Where do you think the name “Ipswich” came from?