Along with trivia games, we rarely pick up word games at thrift any more. Like the former, word games are difficult to play with opponents from different generations as the older players will almost always have a more diverse vocabulary. This natural advantage means younger players get frustrated easily and the game will be relegated to the closet shelf (or the thrift store).

The design of the box for this week’s Thrift Treasure made me think of all those Scrabble variations we’ve highlighted over the years. I’m sure it was no accident the publisher decided to use the same shade of maroon as seen in Scrabble Overturn or Word Rummy. Plext isn’t as old as either of those and was originally offered in 2005 via the private party company, SimplyFun. Much like Avon, Pampered Chef or Longaberger, the only way to purchase their products new was to attend a social gathering hosted by one of your friends or a friend’s friend. Things are very different now – COVID may bring an end to home parties and all of the independent consultant organizations have had to rethink their sales channels. 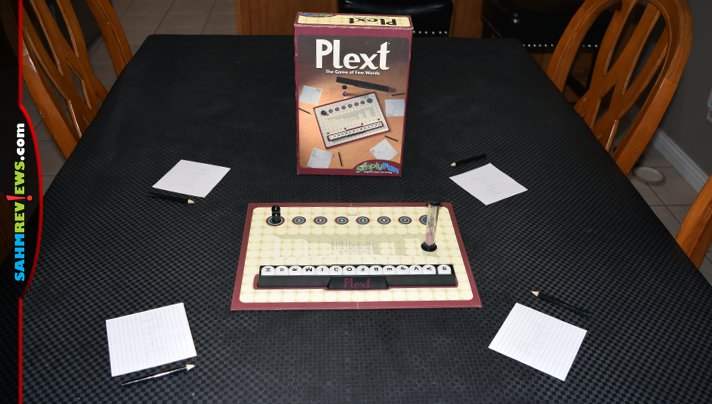 Back to Plext. This word game does have a mechanic different than any of the other word games we have played. Inside the box are 14 custom letter dice, a tray to hold them, one round-keeper pawn, the game board, a sand timer, an answer pad and a number of pencils. 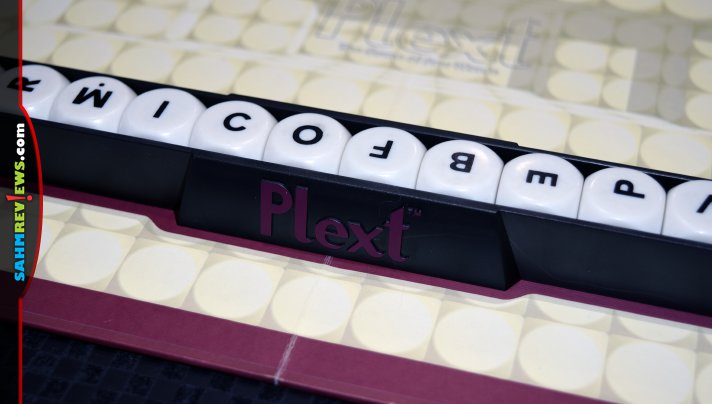 Each player begins the game with a pencil and piece of paper. The board is placed in the middle of the play area. All 14 letter dice are rolled and randomly arranged in the dice tray. The oldest player starts the game by flipping the dice tray over and removing it from the play area. This leaves the dice in a row which everyone can see simultaneously. 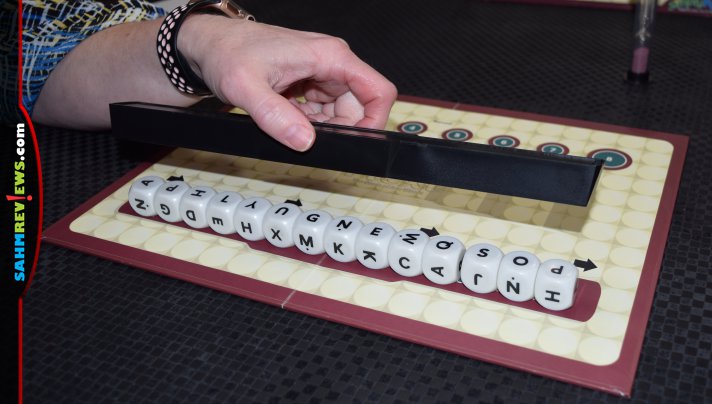 The object of Plext is to “bid” on how few words you can make from the dice. You do not only use the dice shown, you can add any letter between any dice to form a word. For instance, if the letters “T” and “N” are next to each other in the row, you can claim the word “train”. The key is you have to use all the letter in the row AND use them in the order in which they are displayed.

As you can see, longer words are better (again, giving an experienced player a major advantage). On your paper you will write down the words you create, in order, until you use all of the dice. The first player to do so will call out how many words they used (their “bid”) and turn over the one-minute timer. Before the timer expires, all other players have the opportunity to bid how many words they are able to create, even if it is the same amount. 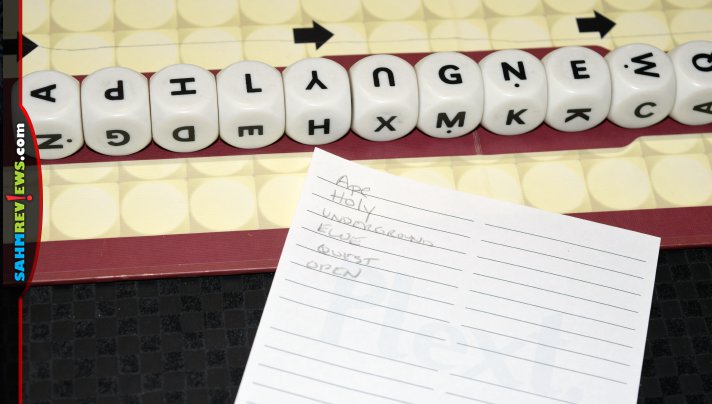 Once the timer expires, the player with the lowest bid (if tied, whomever stated their bid first) will reveal their word list. The words are checked against the dice row to make sure all the letters were used and accounted for in the proper order. Valid words can be almost anything except proper nouns, initials, abbreviations, prefixes or suffixes or anything requiring an apostrophe or hyphen. If the active player is not able to prove his word list is valid, the next player with the lowest bid is given a chance.

The winner of the round receives points equal to 10 minus the number of words in their list. This score is recorded on the player’s piece of paper and a new round of Plext begins with the person to the left of the starting player rolling the letter dice, placing them into the tray, flipping the tray and revealing the new letters. Rounds are kept track of with the round pawn on the included board and a full game of Plext is played over eight rounds. The person with the most total points after eight rounds of play is the overall winner!

Plext supports 2-8 players ages 10+ and estimates a full session to last about 45 minutes. This interesting word game is no longer offered new by SimplyFun, but you’ll find a number of used examples on eBay for a wide range of asking prices.

What do you think of a word game that allows you to use any letters you wish?