Games of all types have always been a part of my life. We played Boggle, Mastermind and Cribbage as children and progressed into video games with the release of the Atari VCS, Tandy TRS-80 and Apple II+. It seemed that no matter where our family was stationed, we were always on the outskirts of town. Other than going to school, there weren’t a lot of like-aged kids around to socialize with. Video games became our go-to form of entertainment when we were of school age, which worked out alright since my brother and I were pretty competitive.

Once I entered the working world, I found myself having fewer hours to devote to entertainment. I was of the mindset that you always worked before play. Because I was in commissioned sales, the more I worked, the more I made. My life consisted of getting up at 4am to go to work, coming home late and either catching a couple hours of network TV or sitting at a computer playing a game like Diablo or Starcraft. These were single-player games, so the social aspect was missing. That is until Microsoft released Asheron’s Call in 1999, the first MMORPG I played. This game allowed hundreds of players to share a virtual world while killing bad guys, collecting treasures and chatting back and forth via text (or voice, if your computer had the ability to run one of the many audio apps while not affecting your game play). Asheron’s Call also featured guilds which rewarded you for teaming up with like-minded players to accomplish tasks one player couldn’t handle on their own. Virtual friendships formed, even if we only knew each other by our screen names (mine was Isaac MacBrady, after a real-life ancestor).

It was shortly after that when I heard about a new game being released soon by the same people, Blizzard, which made my original favorites of Diablo and Starcraft. I hadn’t played their Warcraft version, instead preferring the futuristic setting of Starcraft. But since I’ve always been a fan of Dungeons & Dragons, Wizardry and other fantasy-based games, it wasn’t much of a leap to get addicted to playing World of Warcraft (WoW) with millions of other people. I must have logged thousands of hours over the following decade leveling up different characters, going on raids, working on my crafting skills and just hanging out with new virtual friends. 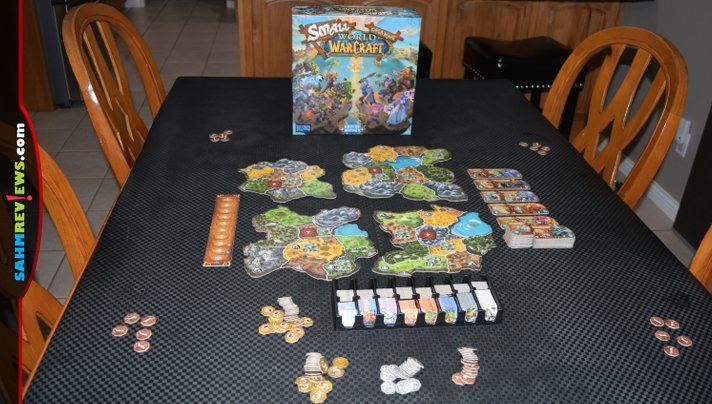 Even though there were countless other players online at the same time, in reality the game is also a single-player game inside one household (unless you sprung for multiple accounts). As our kids grew, we transitioned from playing video games to various board games that would accommodate the entire family. Sequence was an early favorite along with other staples like Candy Land and Chutes & Ladders. Now that the kids are in their late teens the family regularly enjoys heavier titles like Agricola or Luna. 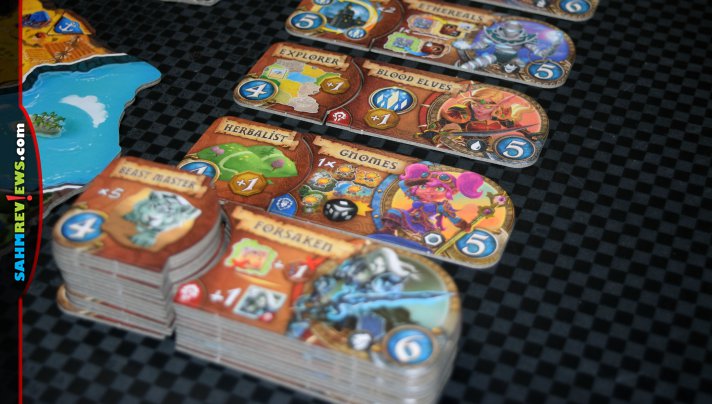 We’ve always been fans of board games that try to bring the video game feel to the table. We’ve played a number of Atari-licensed games issued recently and have also sought them out at thrift. This past fall we were delighted to learn of the eventual release of Small World of Warcraft by Days of Wonder. The marriage of another favorite board game, 2009’s Small World, with the incredible WoW theme by Blizzard is a match made in heaven! 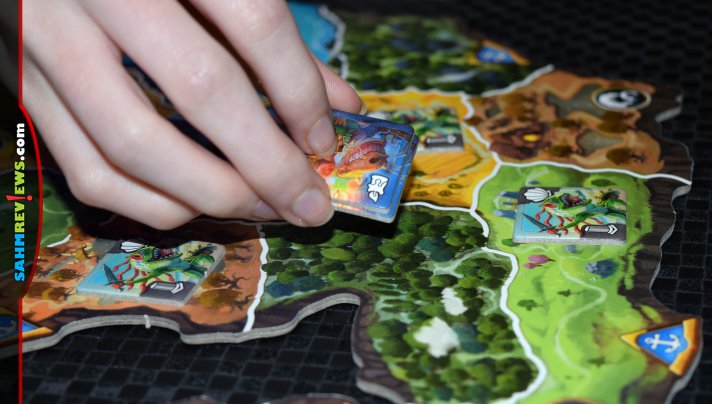 At its heart, Small World is a wargame where you command different races to try to overtake areas. If you’re a fan of games like Risk, Small World is the perfect next-step in your gaming experience. Since you’re going to be shopping for a copy, let me show you why you should elect for the Small World of Warcraft version instead if you are even the slightest fan of the online version.

Small World of Warcraft isn’t just a game with a license thrown on top of it. Days of Wonder worked closely with Blizzard to make sure the two universes combined seamlessly and the artwork was true to the original game of WoW. This partnership ensured the final product feels more like a deluxe version of a game rather than a standard one. 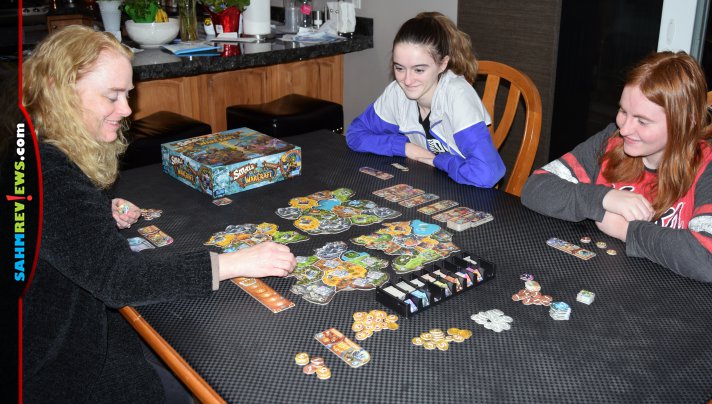 It all starts with the various maps of Azeroth. Depending upon the number of players (Small World of Warcraft supports up to five participants), you will select a variety of game boards of various sizes. Each will lay on its own in the center of the play area and act as islands in the Warcraft world. The artwork is exactly what you would be presented with during your first logon to the online game. 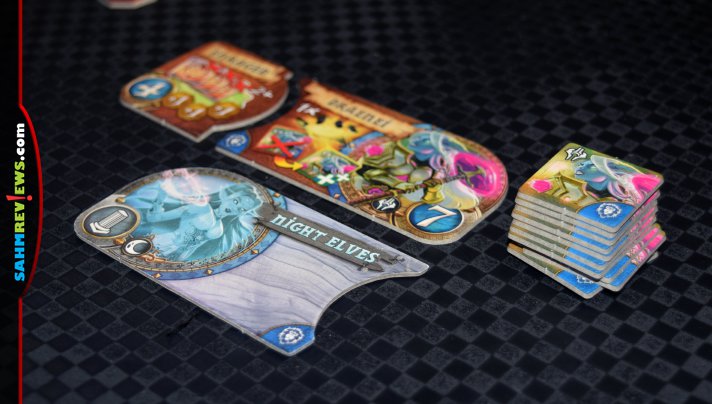 Seventeen different types of races are represented and not just the ones offered in the first issue of WoW. Races which were introduced to the game years later via expansions (Draenei, Pandaren, etc.) are all present. And again, all utilize the exact same art and style as in the original game. And it doesn’t look out of place. If you weren’t aware of the origin of the Warcraft universe, it wouldn’t affect your game experience at all. Everything looks “at home” in this tabletop example. 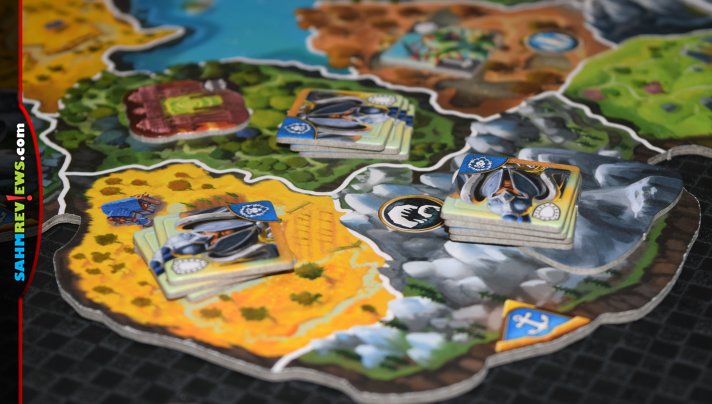 Other game pieces (coins, markers, badges, etc.) are dripping with the theme. You’ll recognize familiar logos, items, powers and more. All of which made the transition to this analog version nicely. I mentioned earlier this version of Small World felt like a deluxe edition. The reason for this compliment goes beyond the thick components, amazing artwork and attention to detail. The inclusion of a plastic organizing tray to keep the hundreds of pieces in order is something I wish all games had. No longer do you throw all the pieces back into the box at the end of the game or even have to take the time to sort them into plastic bags. Every piece has a place in this custom tray and the larger components nest nicely on top. 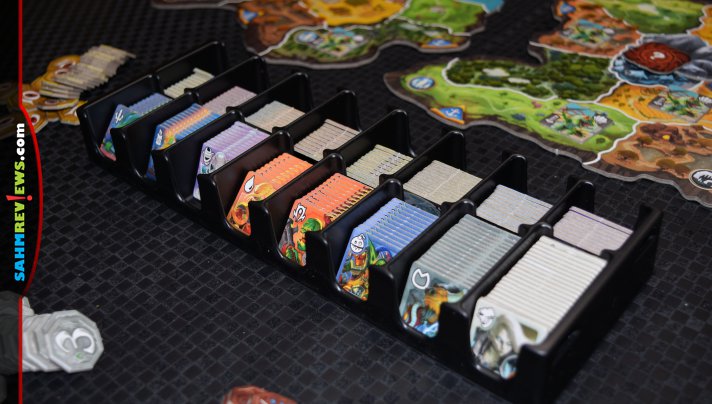 While Small World of Warcraft has a suggested retail price of $10 more than the original Small World, you’ll regularly find them priced within a few pennies at your favorite local game store or on Amazon. If you’re the type that likes to buy all available expansions to a game, you’ll want to stick with the original since there isn’t cross-compatibility. If you’re a fan of the World of Warcraft universe, this is a no-brainer choice. Days of Wonder has even created a team variant set of rules where you can battle for Azeroth by teaming up with other players of the same faction! Just like in the MMORPG!

As always, if you’re interested in learning even more about Small World of Warcraft or what else Days of Wonder is working on, visit their website! Additionally, make sure to follow them on both Facebook and Twitter so you can learn about upcoming releases before everyone else!

Admit it, how many years did you play World of Warcraft?!

Tags: board games, Days of Wonder, strategy, World of Warcraft