With each new game we play, I become increasingly impressed with the lengths publishers will take to make sure their themes are authentic, respectful and appropriate. As of late, there’s been a long-overdue push in the game industry for inclusiveness and accuracy when creating a product based in a theme in which they’re not experts.

Beyond making sure the artwork is tasteful (and the gameplay is enjoyable), publishers are regularly consulting with outside organizations to get a realistic viewpoint on how their culture/industry/etc. will be portrayed. While some may lament the changes this brings to their games, we believe the end result is a product that is not only more marketable, it is more enjoyable to play due to how accurately the theme is implemented.

Case in point – when we first heard about the upcoming game, Inuit: The Snow Folk, we had a concern about how these indigenous peoples would be portrayed. Our fears were unwarranted once we opened to the first page of the rule book. Not only did the publisher, Board&Dice, consult with various Inuit organizations, institutions and individuals, they listened to what they had to say about how their culture would be depicted.

Theme aside, what about the gameplay? At first glance, Inuit: The Snow Folk reminded us of Battle Line or Hanamikoji. In both of those games, cards are lined up in a row. And while you’re doing the same in Inuit, you’re working on your own village instead of placing cards in a shared area. More about that in a minute.

Setting up the game couldn’t be much easier or quicker. Set aside the special First Player and Polar Nightfall cards and shuffle the rest of the 115-card deck. Deal 10 cards into a pile and shuffle in the Polar Nightfall card you set aside earlier. Add the 105-card deck on top of this 11-card pile and place the entire deck in the center of the play area. Reveal the top five cards and lay them out, face up, next to the deck. This forms what will be known at the “Great White”. All players take a Village Board in their color preference. The board unfolds and is placed in front of each player, leaving room for cards to be placed both above and below it. A start player is chosen and given the First Player card. That’s it – you’re now ready to play Inuit: The Snow Folk!

Let’s talk a bit about the Village Board. All are identical sans the color and dictate what action you will take and where you will play your cards. The individual sections represent occupations and separate your played cards into columns. Seven occupations are shown – Elder, Shaman, Warrior, Whaler, Bear Hunter, Seal Trapper and Scout. All players begin with one of each occupation and is represented by the space on the Village Board. This can be difficult to remember when you’re counting how many of an occupation you have – don’t forget to count your starting one on the board! 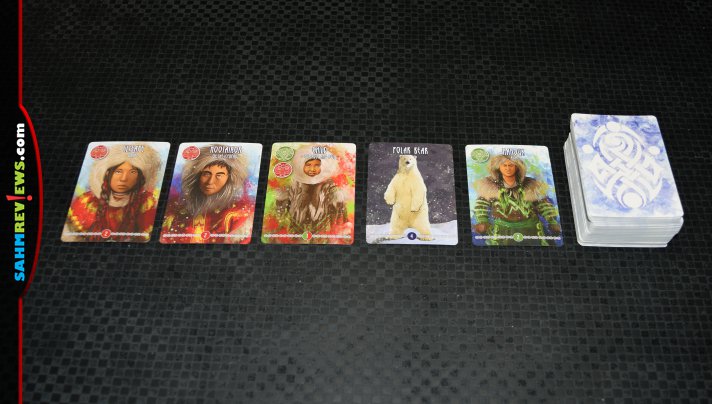 Each player’s turn is broken up into three effortless steps. The first thing they do is reveal the top card from the deck and add it to the line of cards in the Great White. Next, for each Scout in your village (remember your starting one!) you have the option of drawing an additional card and adding it to the Great White. Lastly, choose one of the first six occupations listed on your Village Board and resolve its ability. Each one will identify the type of card you may take from the Great White tableau. You are allowed to take as many cards of that type as the number of Inuit cards you have assigned to that occupation (again, don’t forget to count your starting one!). Depending upon which occupation you chose will determine what you do with the cards you collect. 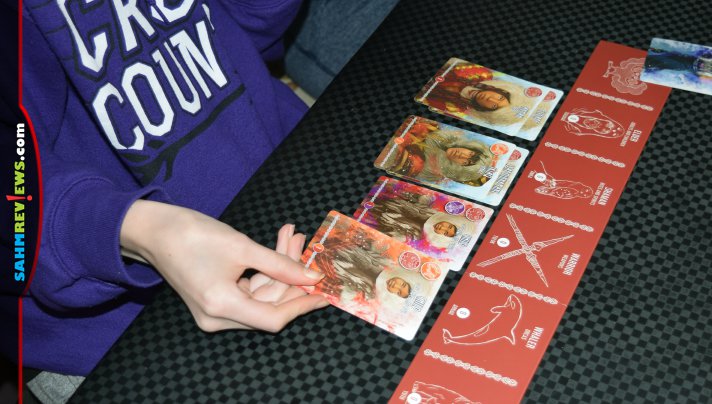 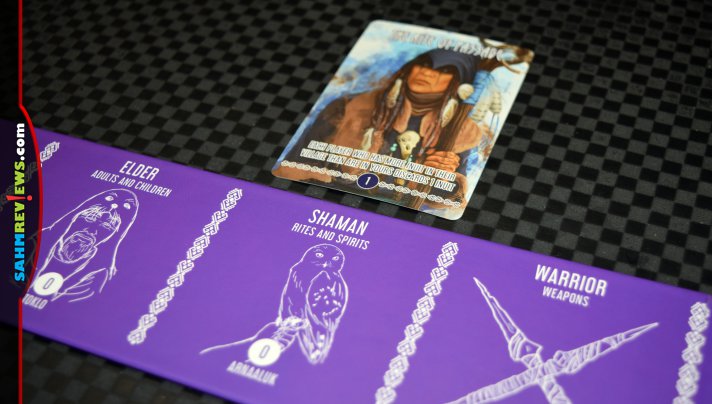 The Shaman occupation allows you to collect Rite and Spirit cards and resolve them in any order you choose. When complete, they are placed above the Shaman space in your village. Warriors also allow you to collect Inuit cards, but instead of expanding your village, these represent the weapons of Inuit you defeat. Cards are placed above the Warrior space face-down and will earn you a point each at the end of the game.

The three hunting occupations, Whaler, Bear Hunter and Seal Trapper, operate in a similar manner. They allow you to collect Orca, Polar Bear or Seal cards, respectively, and place them above the corresponding occupation space. These also award you victory points at the end of the game and possibly more if you have the correct Spirit cards in play. 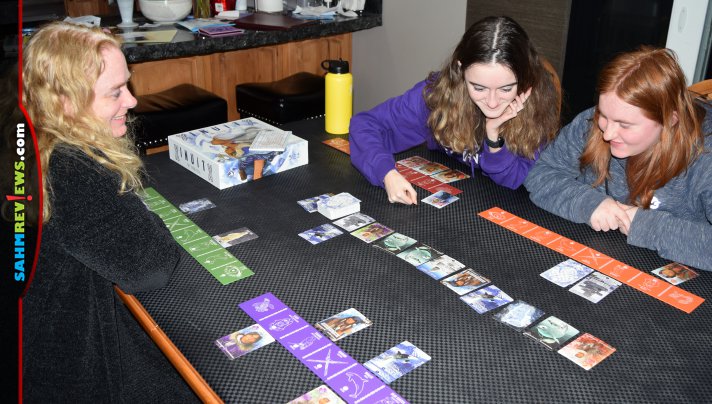 The Scout occupation acts a little differently. It isn’t “activated” in the third part of a turn – it only increases the number of additional cards you may add to the Great White in the second part. Again, that is an optional ability and you do not have to draw as many cards as Scouts. You may stop at any time.

Players take turns in clockwise order until someone reveals the Polar Nightfall card from the deck. This triggers the end of the game and turns continue until all players have had an equal number. Victory points are then tallied on the included score sheet. All Inuit cards of your player color which are present in villages, even if not your own village, earn you points listed on the card (two for adults, one for children). If you have Inuit cards in your village which do not match your village color, you will lose the same number of points. Polar Bears are worth four points each, Orcas, three, and Seals, two. As mentioned previously, collected weapons are valued at a point each as are all Rite cards, apart from the Rite of Inspiration, which is worth four points. Lastly, earn bonus points by totaling up points earned on Spirit cards. The person with the greatest number of overall points is the winner, with ties resolved by whomever has the fewest Inuit in their village.

We thoroughly enjoyed the player interaction in Inuit: The Snow Folk and can see how there are many ways to earn points, but you can’t do them all. Inside the box are also a couple mini expansion modules that add things like conflicts (resolved immediately), legendary characters, great game to hunt and seasons which add temporary rules to the game until the next season card is drawn. These may be mixed/matched into the game as you see fit so you can play with only the ones you enjoy the most!

While Inuit: The Snow Folk is a card game at its heart, don’t let the slightly higher MSRP turn you off. The production quality of the game is well above what you normally see in card games of this type. A well-designed insert assures the contents will be kept in place and ready to play next time. No sorting needed! Ask for a copy at your favorite local game store or grab one with free Prime shipping from Amazon.

We’ve heard of some very interesting things coming out of Board&Dice very soon, so be sure you’re familiar with their website and check out their Facebook or Twitter feeds. Especially if you’re a fan of abstract games. They’re publishing their first ever and it looks to be a great one!

Before reading about this game, were you familiar with the Inuit people?