Many times when we play a game, it reminds us of another title we’ve enjoyed. One can’t help but wonder if the designer used it as an inspiration when creating their version. Before you exclaim, “Hey, that’s stealing!”, know that it isn’t. Nearly every possible game mechanic has been used in multiple games throughout the years. And just as many can be traced back to the original game from which it was inspired.

When we first saw Passtally by Pandasaurus Games at last year’s Gen Con convention in Indianapolis, I instantly thought of one of our favorites, Tsuro. To be fair, any game that uses tiles with pathways brings that modern classic into our minds. Even games that pre-dated Tsuro, like Labyrinth, take a back seat. And it’s probably not fair. Passtally is not Tsuro. While it shares the use of tiles and paths, that’s where the similarity ends. 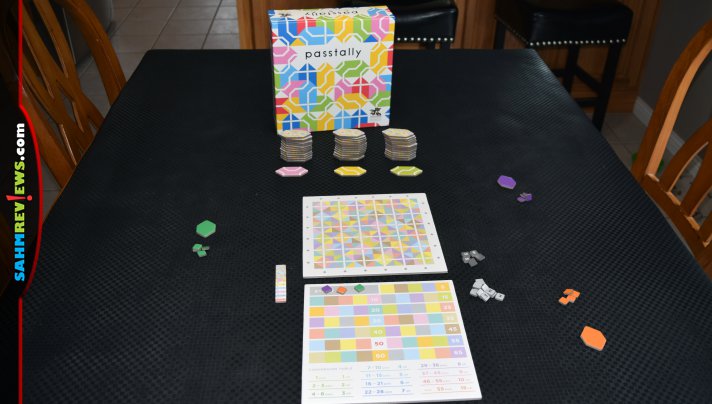 In Passtally, your goal is to score the most points by creating long paths which travel through multiple tiles. The landscape will be ever-changing, so finding the right tile to benefit yourself and not your opponents is key. Start by placing the game board in the center of the play area alongside the score board. Shuffle the extra-thick tiles (face-down) and divide them into three equal stacks. These are placed next to the game board with the top tile from each pile drawn, turned face-up and set next to the stack. Numbered level markers are kept in a nearby supply and each player takes markers of their preferred color. One of these is placed on the “Start” space on the score board. 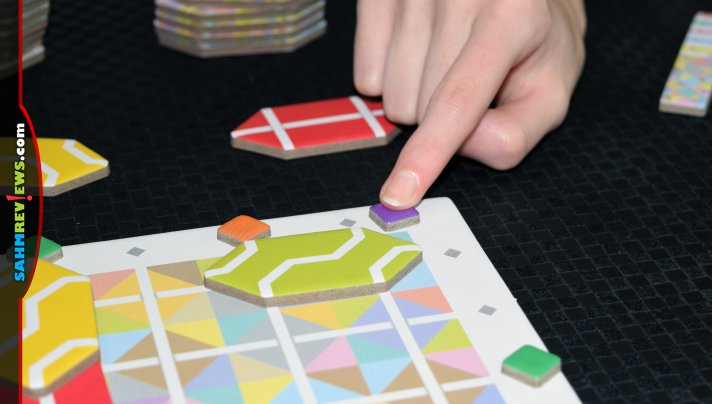 Beginning with the start player, everyone will choose one spot on the same side of the board to place one of their markers. After everyone has submitted one, the last player chooses a space on a different side and turns move in the opposite order. This occurs again for the third and fourth sides until all players (Passtally supports up to three people) have one marker on each of the four sides of the game board. 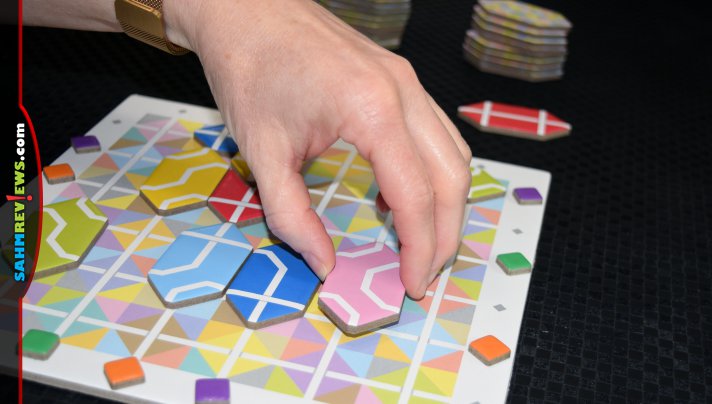 Again, starting with the first player and proceeding clockwise, you will take two actions on a turn. Your first option is to take one of the three face-up tiles and place it on the game board. You can pretty much put this tile anywhere you like as long as you adhere to a couple restrictions. You cannot place the new tile in a way that would cut off one or more pre-existing lines. The tile must also be placed either horizontally or vertically, never diagonally. You can stack on top of other tiles as long as your tile covers two lower tiles on the same level (not directly placed on top of another one). 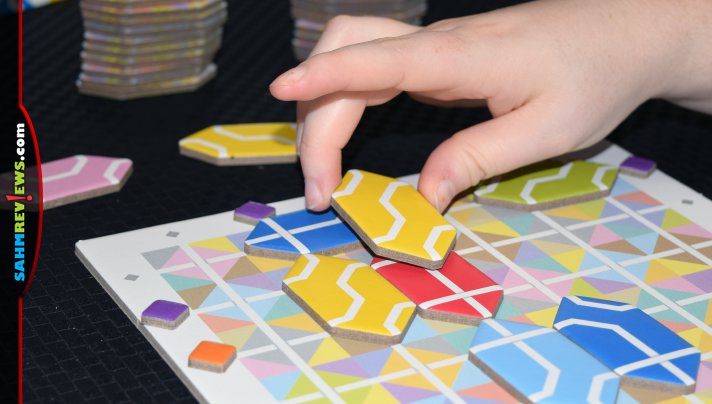 The other possible action on your turn is to move one of your four player markers. You will move your market a total of two spaces around the circumference of the board in either direction. When you encounter other markers, you will jump yours over them, only counting the next open space. 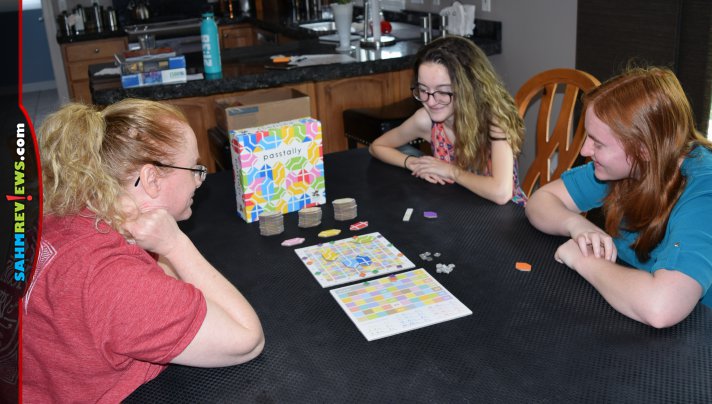 With both actions, you are trying to connect paths between both pairs of your markers so you may score them. You may take both actions one time each or take one of the actions twice on your turn! Once you have finished both of them, you will score any unbroken lines by figuring out how many “passes” your path takes across tiles before reaching the other end. Passing through the same tile twice counts twice. Climbing levels adds to the number of passes also (two for a 2-level high tile, three for a 3-level, etc.). The handy level markers are placed on 3- and 5-level high stacks to make scoring easier. 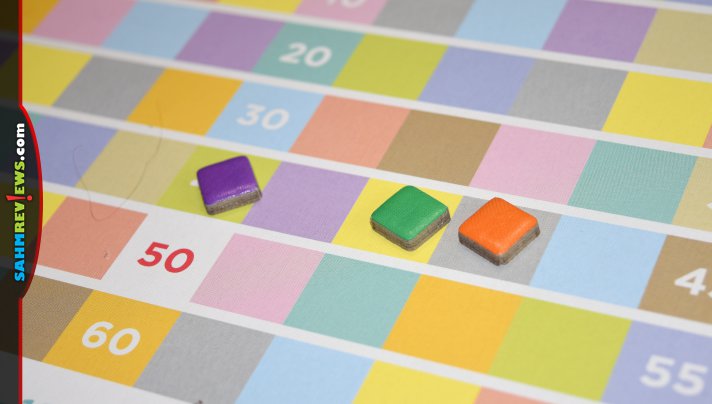 Once you have added up the total number of passes from BOTH lines (if applicable), you will score points based upon the table on the score board. Passing through one tile earns you a point. Travel through the tiles 10 times nets you four points. Amass more than 55 passes on a turn and max out at fifteen points! 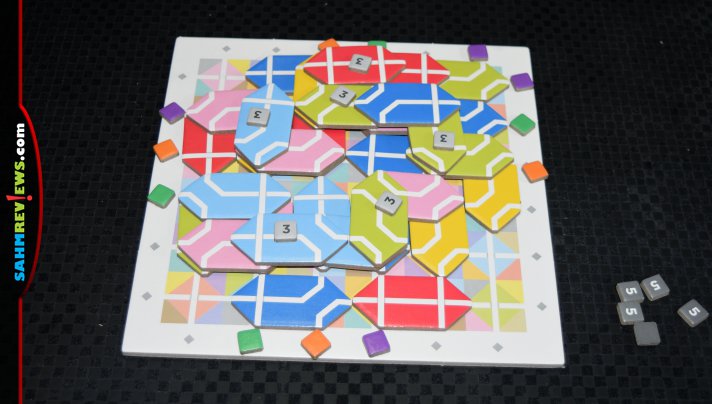 Players continue in clockwise order until one of the end game conditions are met. If any player reaches 50 or more points or one of the three stacks of tiles is empty, finish the current round so that all players have had the same number of turn. If at any point one of the available tiles cannot be legally placed on the board, the game ends immediately. Obviously, the person with the highest score at the end of the game wins Passtally!

There are a number of places you can pick up your own copy of Passtally. First, ask for your local game store to order a copy for you (yes, they’re getting deliveries again!). You can also order direct from Pandasaurus Games or grab it from Amazon! We always suggest following the game publishers on social media, and in this case you’ll want to do so today. Pandasaurus Games has started taking preorders on the follow-up to their award-winning game, The Mind! Follow them on Facebook and Twitter to find out when The Mind: Extreme will hit the shelves!

What is your favorite tile/path game?