If you’ve ever heard of Laverne and Shirley or Mork and Mindy, you are witness to one of the most common practices in television marketing: spin-offs. More current examples would be Mixed-ish and Grown-ish, a couple shows in ABC’s prime time lineup that stemmed from the success of Black-ish. Leveraging on the success of something else isn’t unique to television. That is the backbone of cross-branding and product licensing, you know. We even see this concept implemented in the board game industry. Some games are so well-received that they become the foundation for other games. One recent example is Kodama 3D from Indie Boards & Cards, bearing a likeness in name and gameplay to Kodama card game. Except it’s 3D instead of cards, which you could probably surmise from the name alone. 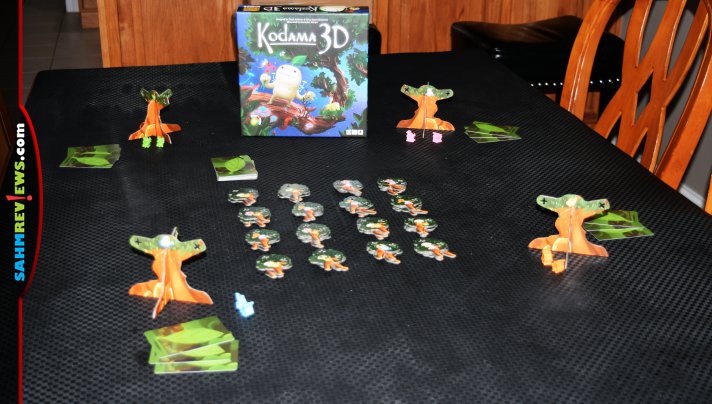 Up to four people can play Kodama 3D, including a variant for solo play. Everyone takes a trunk piece that displays one of the four kodama along with one kodama-free trunk piece and the two kodama pawns that match the one displayed on their tree. Randomly mix the branch pieces and create a grid (based on the player count) to form a forest. Shuffle the deck of goal cards and deal three to each player. Place the deck near the forest.

Before the first round begins, each player will review their three goal cards and select two to keep. The third will be placed on the bottom of the deck. After everyone has made their selection, deal the top four goal cards face-up into a line alongside the deck. Starting with the first player and working clockwise, everyone places one of their kodama meeples onto a stack. In reverse order, the second is placed. 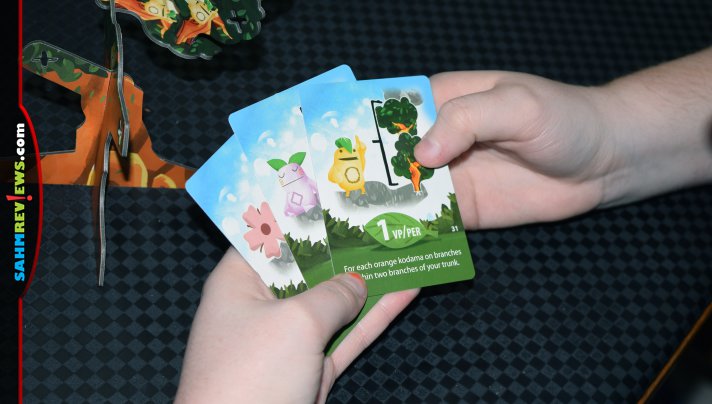 The goal of Kodama 3D is to score the most points by attaining the objectives on your goal cards. These will be different for all players which keeps players from all zoning in on the same branch pieces. The draw pile is an additional source for attaining more goals, including some that may overlap with your existing ones.

On your turn, you’ll move one of your kodama meeples in a straight line to an open branch. The top branch on the spot you left is the one you’ll be adding to your tree. As a result, you’ll need to plan a step ahead when moving your meeples to a new stack. 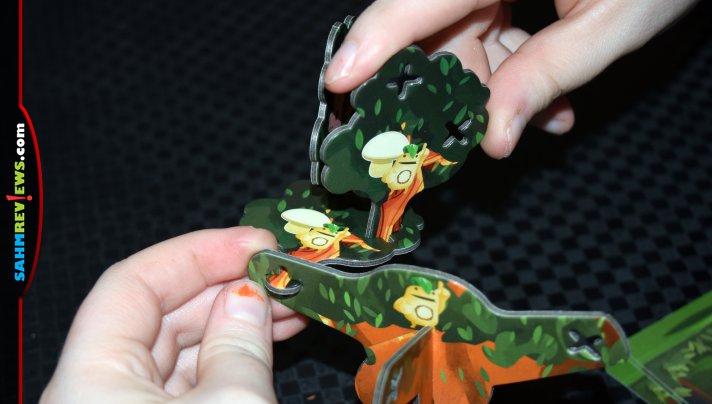 You may earn points for having specific features lined up or a specific number of kodama on your tree. Each of the branches displays one of four features (caterpillar, firefly, flower, mushroom) and one of four colors of kodama (blue, green, orange, pink). Pay attention to your goal cards so you can select the correct branches! When you add a new branch to your tree, if both the Kodama and the feature are different than the branch you are attaching to, then you may select a new goal card and add it to your hand. 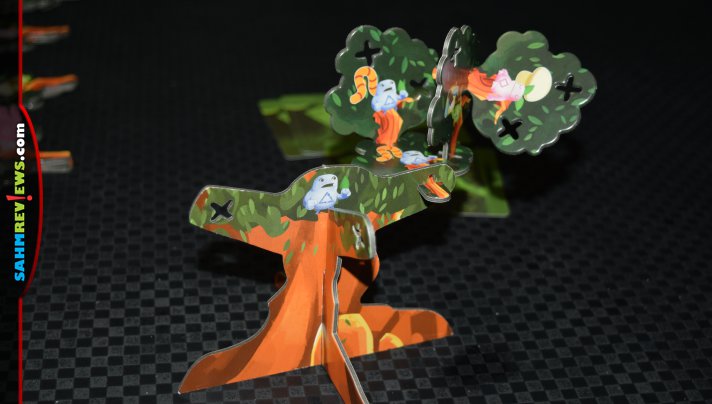 You’ll continue taking turns until all players have added 12 branches to their tree. It’s important to remember to balance the tree because you can’t add a branch to a place that makes it tip over. (Personal note: Scott referred to his as a monstrositree and I needed to document that so I didn’t forget.) After everyone has finished placing their last branches, tally up the points on your goal cards and determine the winner. Kodama 3D is a light family game that’s available at local game stores, direct from Indie Boards and Cards or on Amazon. Indie Boards and Cards continues to release a variety of games with announcements often happening on Facebook and Twitter. Tune in to find out the latest news and promotions including details about the next in the family, Kodama Forest!