As of late there has been a ton of construction activity in our city. New houses, shopping centers and a 100-acre sports complex are all either completed or will be in a couple months. All of our yards are torn up because of the arrival of fiber internet. And of course spring always marks the start of home improvement projects.

I’ve always been fascinated with the idea of being a city planner. Deciding what gets built where. Taking into account traffic patterns, resident preferences and school districts. I know I could have certainly done a better job than whomever was responsible for our wacky system of streets and roads. It’s too late for me to undertake a second career of that magnitude, so I’ll settle for a little city-building by playing Architects of the West Kingdom by Renegade Game Studios! 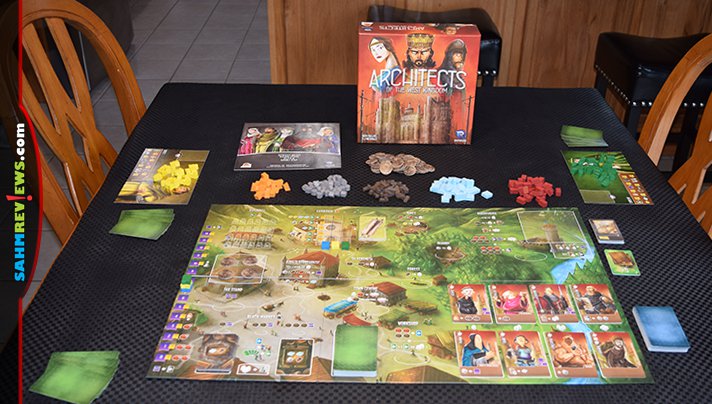 Set in the Carolingian Empire of the 9th century in Europe, Architects of the West Kingdom challenges up to five players to become royal architects and vie to impress their king by collecting raw materials, hiring apprentices and constructing various landmarks throughout the land. Only the most successful will maintain their noble status!

Setting up for a game of Architects of the West Kingdom is pretty quick compared to other games of this type (I’m looking at you, Lisboa). The main board is placed in the center of the playing area with the Black Market, Reward, Building and Apprentice Cards shuffled into their own decks and placed in their designated spots. Supply piles of clay, wood, stone, gold, marble and silver are set next to the board along with Debt and Multiplier cards. Each player takes one of the colored Player Boards and 20 workers in the matching color. 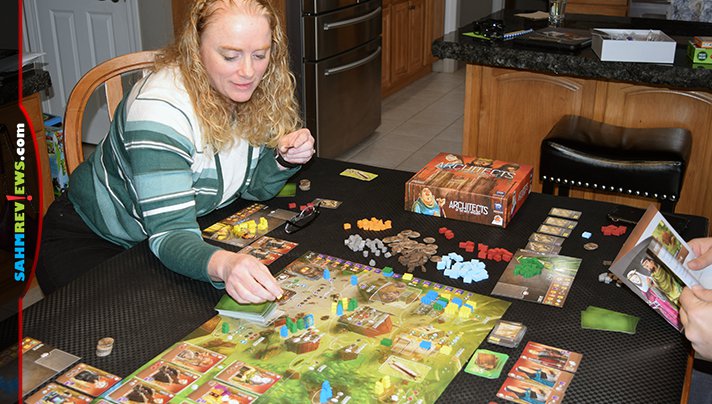 A hand of four Building cards is dealt to each person, who picks one and passes the remaining to the player on their left twice. When they receive the second pass containing just two card, one is chosen and the other is returned to the bottom of the deck, leaving each person with three Building cards to begin the game. Building cards depict the items you’ll need to collect, the type of apprentice(s) you’ll have to hire and penalties and bonuses you’ll receive when it is constructed. They are also worth victory points at the end of the game! 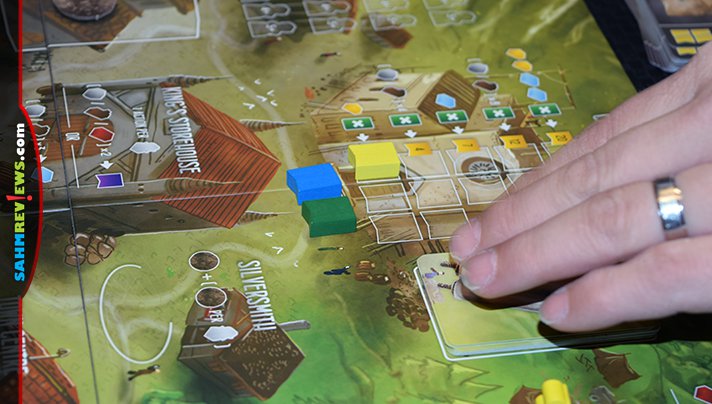 Taking a turn is as simple as choosing one of your workers and placing it on a spot on the board to activate the listed action. These range from Advancing Work in the Cathedral, Constructing a Building, Visiting the Black Market to grab cheaper supplies, heading out to the quarry, mines or forest to collect raw materials, trading resources at the King’s Storehouse or even hiring apprentices at the Workshop. 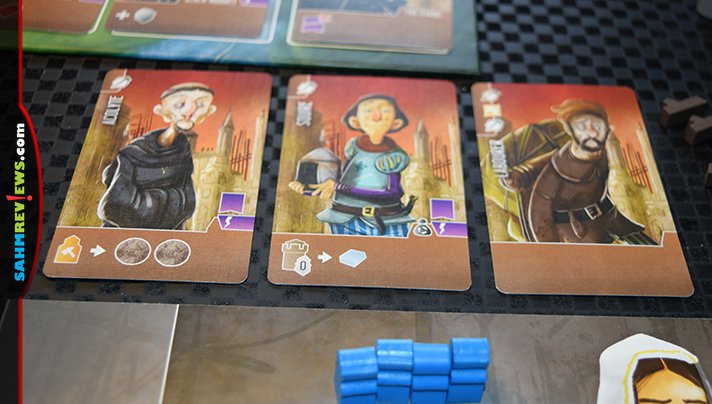 With almost every action comes a cost. Some spaces allow you take the action multiple times if you have placed more than one worker in that spot. For example, having four total workers (would need a minimum of four turns to do so) in the forest will allow you to produce four pieces of wood on one turn! 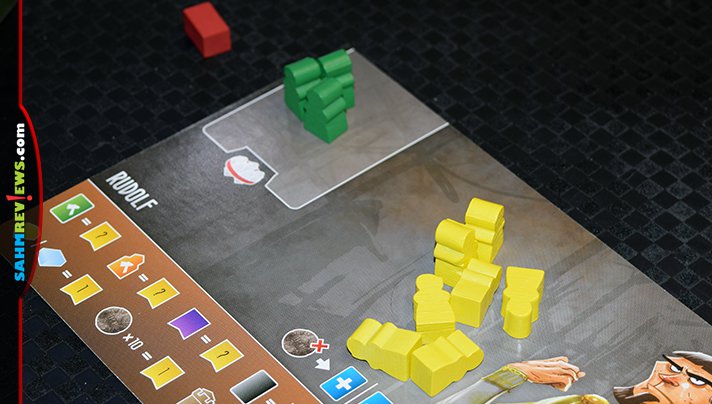 You have to watch out for large groups of workers though. Other players might think they’re greedy or up to no good. Your opponents can place a worker in the Town Centre and hire someone to capture your workers from one location. These are taken by the capturing player and placed on their player board. On a subsequent turn they can then send them to jail by visiting the Guardhouse! If you want them back, you’ll also have to go to the Guardhouse to either rescue them from the other player or get them released from prison. 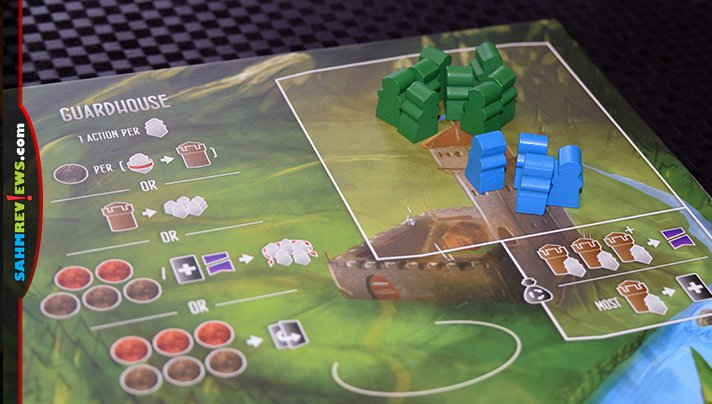 Your actions in Architects of the West Kingdom have consequences. Visiting the Black Market, building unpopular buildings (like a dungeon) and other things will decrease your virtue, which is tracked on the side of the board. If your virtue falls too low, you will not only lose points at the end of the game, you’ll also be unable to help with the Cathedral until you raise your virtue to a respectable level. Additionally, if your virtue level is very good, you have no business going to the Black Market!

At certain points through the game the king will check on the progress and make sure everyone is held accountable for their actions. This happens when the Black Market is full or enough buildings have been constructed to trigger it. Any workers found in the Black Market are sent to prison. Any players with three or more workers in prison lose a virtue on the track and the player(s) with the most in prison will have to take a debt card!

For the most part, there are two main ways of earning victory points in Architects of the West Kingdom – building buildings or advancing construction on the cathedral. Players also earn or lose points based upon their position on the virtue tracks at the end of the game. Points are also lost for unpaid debts and anyone still in prison, and gained for leftover silver, gold and marble. The player with the highest overall point total wins Architects of the West Kingdom! 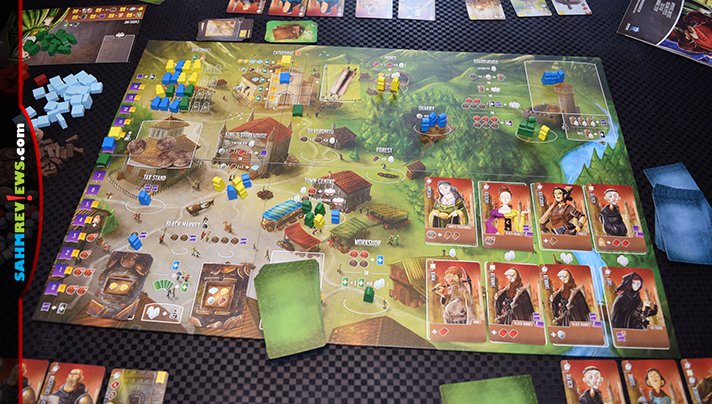 Although everyone is working on the same goals, there are many different paths to choose from. All seem to be viable strategies, giving Architects of the West Kingdom a lot of replayability as you try out different techniques. The player boards have an advanced side giving everyone different starting resources and player powers once you feel you have mastered the basic game.

Pick up a copy off of Amazon, direct from Renegade Game Studios or ask for it at your favorite local game store. This is the first of a trilogy of games set in the West Kingdom, and if as good as Architects, we’re sure you’ll want them all in your collection! Follow Renegade on Facebook and Twitter to find out when and where they’ll be available!

What would you build in your city if you had the power?

2 thoughts on “Architects of the West Kingdom Board Game Overview”