When someone picks up a game to play, the theme is usually the first thing they consider. You might get to play as a wizard, a frog, a worker who is trying to impress a king, a painter mixing colors – the options are endless. None of these potential roles are intimidating. We can put aside our day-to-day lives and imagine ourselves working on a farm to grow crops or planning train routes without reservation. So why do science-themed games seem so intimidating?

Maybe it’s because we all have bad memories of high school science with its film-covered lab tables and slightly-odd teacher. The majority of us don’t use the scientific principles we learned in our everyday life and the lessons escaped our brains a long time ago. The more likely reason we tend to shy away from science-themed games is because we know we probably won’t be competitive with others who have a better recall of Chemistry 101.

Earlier this year, Genius Games released their long-awaited Periodic board game after a very successful Kickstarter campaign in 2018. As with their other titles like Virulence, Ion and Peptide, Periodic doesn’t require an in-depth knowledge of scientific principles in order to enjoy the game. In fact, you’re expected to learn a few things along the way!

In Periodic, you will be moving your pawn across a representation of the periodic table of elements, researching individual elements and trying to be the first to complete various goal cards. Instead of the standard recipe-fulfillment in games where you’re making a cake or filling an order, these goal cards feature the most common elements in particular objects, industries or matter states. This is your first educational lesson. 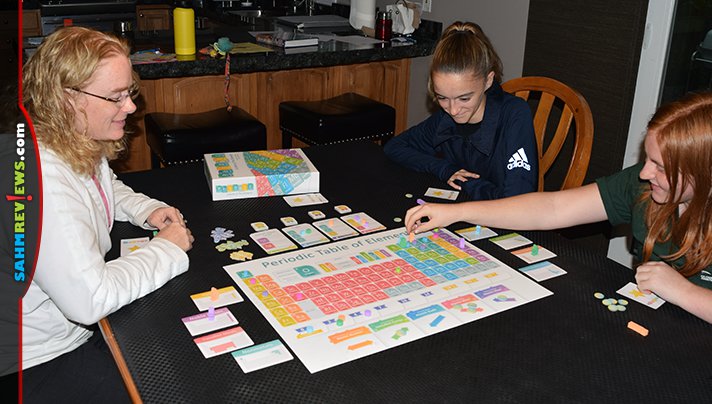 Set the large board in the center of the play area and give each player a flask, microscope, disc and research cubes of their chosen color. Goal cards are sorted by color and placed above the board (only some of the goal cards are used each game). Markers are placed on the board matching the corresponding elements on the exposed goal cards. Element group cards are placed in a semi-circle on either side of the board and award tiles are set above the goal cards. An energy token is set on each of the trend spots on the board. First player is determined and players receive additional energy tokens depending on their turn order. Agenda cards are also dealt out and each person chooses one to attempt during the game, with the rest being returned to the box. 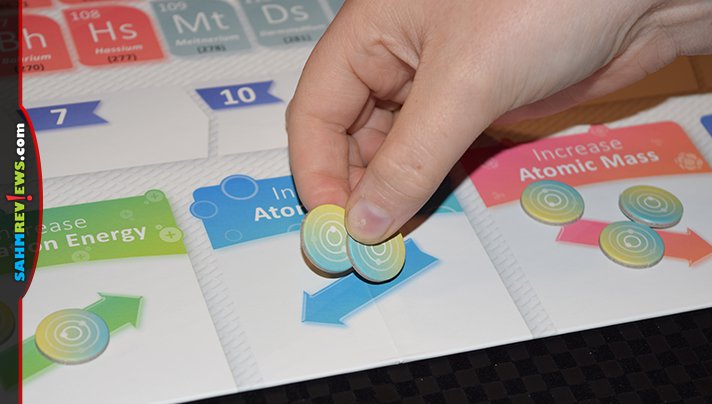 While the appearance of the board can be intimidating, it need not be. Play can be summed up as a simple movement fare where you’re trying to end your turn on one of the elements that feature a goal marker. On your turn you have a simple choice – take one action and earn energy tokens or take multiple actions and pay for each one. 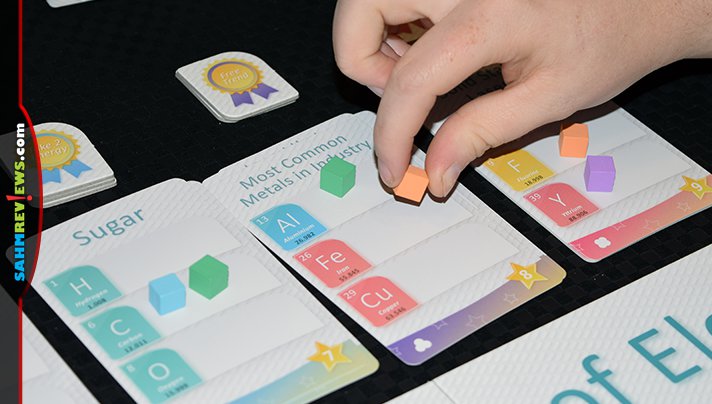 The action you choose is represented by the periodic trend spots on the bottom of the board. Each lists their scientific reasoning behind the movement direction (increasing the atomic number, decreasing mass, etc.). Drilled down, one allows you to move left or right, one upwards and to the right, another down and to the left, the fourth down and right and the last one, you guessed it, up and to the left. 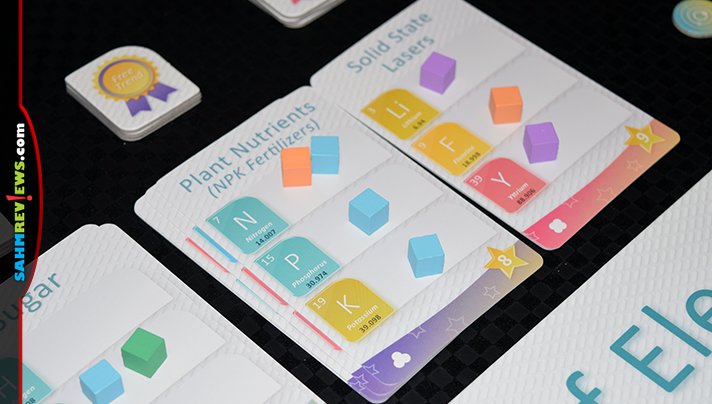 For each movement action, you may move your flask from one to five spaces in the allowed direction. Ending your movement on a space with a goal marker allows you to place one of your cubes on the goal card featuring the same element. Multiple players may land on (and research) the same element, but once a player has completed all the elements on the card, it is considered complete and awarded to that person. Any players with cubes on that card will receive lab tokens (victory points) according to how many cubes they had on the card. 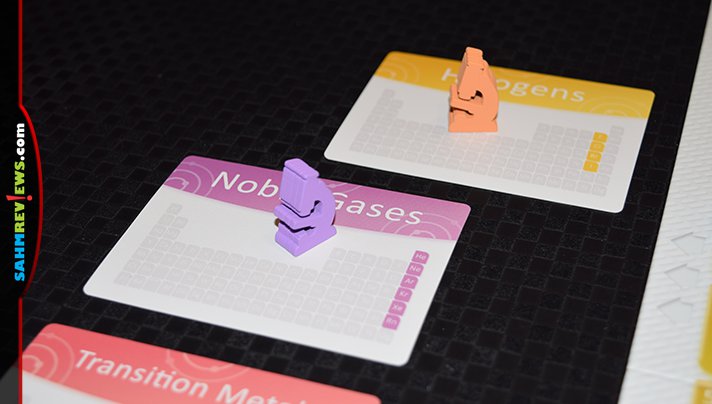 The periodic table is divided into the most common families of elements. When a player ends their turn on an element that is part of the element group shown on the next card, they advance their microscope clockwise along the track. At the same time they also move their disc on the academic track on the board one level to the right. This track also awards victory points the further along the track you progress. 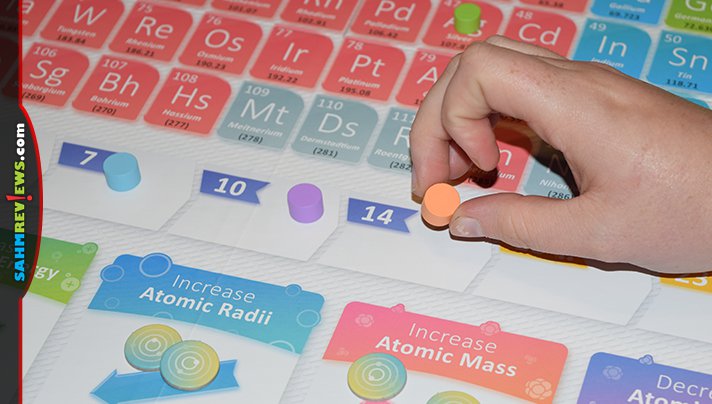 Award tiles are given to players for completing goal cards and award single-use benefits. These include allowing you to move additional spaces, move anywhere within a particular element group, activating a periodic trend or taking additional energy tokens. Agenda cards have a unique combination of possible objectives that award bonus points to that player if they are able to achieve one or both by the end of the game. These range from receiving a point for each level on the academic track you achieve to earning nine points for every set of three goal cards you complete (all from different difficulty levels). 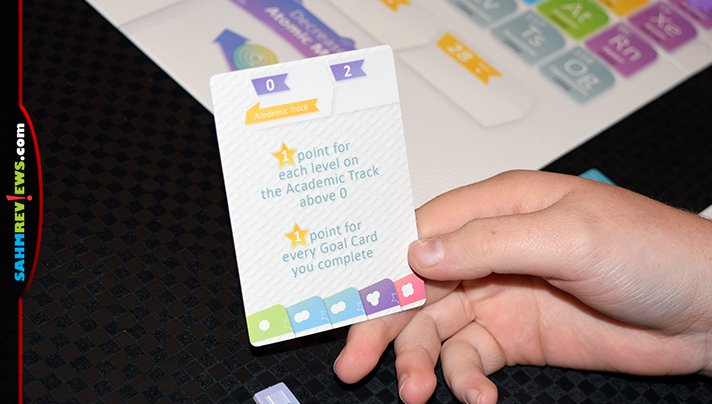 As you can see, there is zero reason to be intimidated by Periodic, even if you didn’t score well in high school science. You can find copies of this brand new game at your favorite local game store or online at Amazon. Shuffle over to the Genius Games website to find out when their next title, Nerd Words, will hit the shelves and observe their Facebook and Twitter timelines to hear all about an upcoming Kickstarter campaign and a direct-to-retail educational card game!

What was your weakest subject in high school?