With the number of new games released each year numbering well into the thousands, how does one decide which new ones to try? If you are new to the board game world, you’ll probably rely on friends and family (or SahmReviews!) to introduce you to new titles. Once you have gotten your feet wet with starter titles like Ticket to Ride or Dominion, you’ll want to start branching out to games that appeal to your personal tastes. Some people play games that stick to a theme – trains for example. Others might broaden their search for games with accurate historical backgrounds or that teach grade-level skills while playing. Much like those who read everything put out by the same author, I look for games from some of my favorite designers.

I’ve talked a lot about Stefan Feld and Uwe Rosenberg in the past, both well-known creators of more difficult euro-style board games. In fact, I probably have 70% of everything that Feld has ever published, and a good percentage of Rosenberg’s titles. There is another prolific designer whose work I instantly consider whenever I see his name on the box – Martin Wallace. His games are known throughout the board game industry and his titles have been published for nearly 20 years. We featured Hit Z Road back in 2016 when it first came out and are backers of the reissue of one of his better known titles, Brass. But just hitting the U.S. market is one of his latest popular titles previously only available in Europe – The Arrival. Thanks to our friends over at Cryptozoic Entertainment, us Yanks can now enjoy this solid board game set on an island that would eventually become known as Ireland. 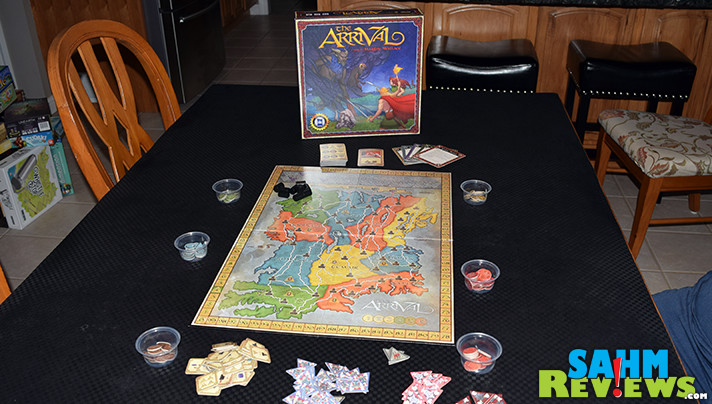 The premise of The Arrival revolves around the island’s current evil ruler, King Balor. He commands the Fomori, a supernatural race of fierce monstrous beings. You and your opponents represent the arrival of mighty tribes of humans who want to make this island their home. So while you are technically competing with the other tribes for the right to settle, everyone must be aware of the oncoming force of the Fomori. A decision must be made – do you spread across the land quickly trying to establish dominance? Or do you build up your defense, risking the chance that competing tribes will gain a better stronghold? 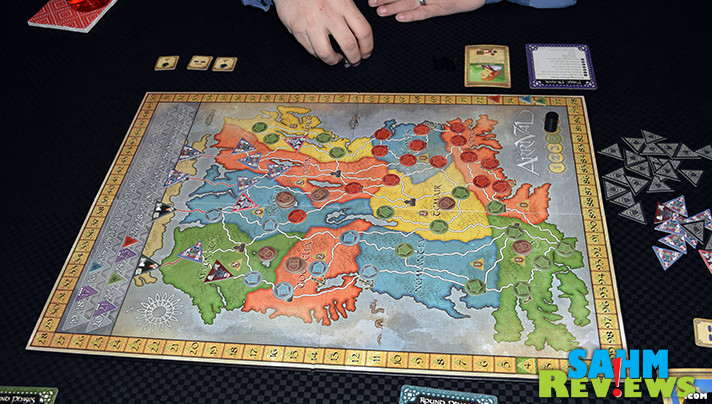 At first glance you might think The Arrival is a complex game taking hours to learn. We found that not to be the case and is quite streamlined and quick to get up and running. After the board is laid on the table, it is randomly populated with eight tiles for the Fomori at the top. The deck of Earning cards are shuffled and divided into four piles with 18 cards each.  These are set next to the board within reach of all players. 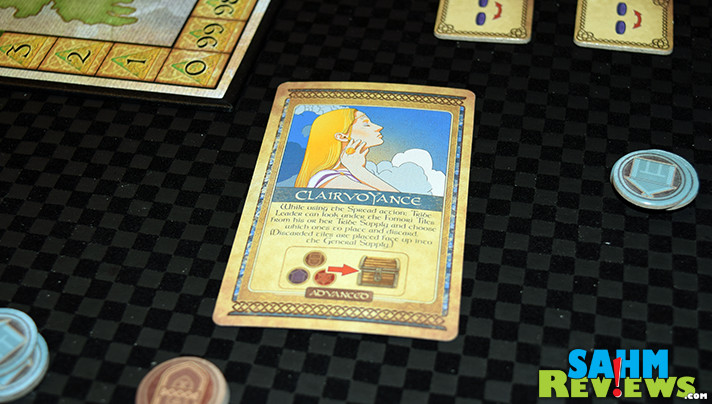 Players choose the color they want to play and receive two Building Disks in that color, two Blockers and an Overview Board (player aid). Beginning with the player to the right of the first player and continuing counterclockwise, each person sets one Building Disk from the general supply (of their color) at any open Port Location on the board. This will be your starting location. The Corruption track is set to zero and each player places their Tracking Token on the score track at “4”.

The Arrival is played over a number of rounds, four to six depending upon the number of players, and may end sooner if you are overrun by the Fomori. Beginning with the starting player, you will draw one card from one of the four stacks of cards. The symbols on the backs of the cards give clues as to the powers of that card, allowing you to make strategic decisions. This card is laid face-down in front of you. This process is repeated three more times until everyone has four cards laid in a line directly in front of them. 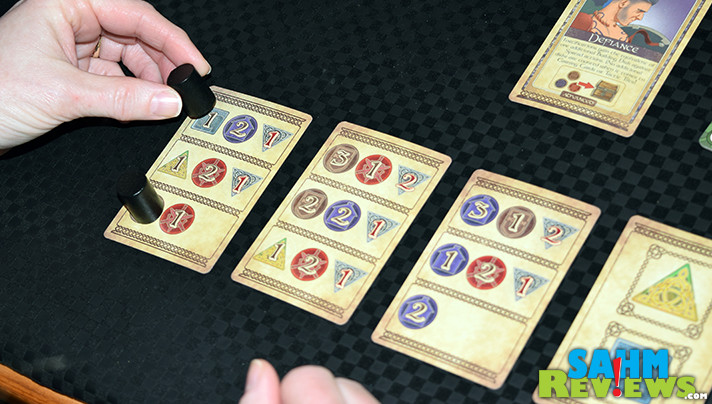 At the same time, everyone reveals their first two cards by turning them over. You must now choose from the three rows of symbols which one you like the least and place one of your Blockers on that row. Then the final two cards will also be revealed simultaneously and one of the remaining two rows must also be blocked using your last Blocker. This leaves you with one row whose symbols will be resolved.

The symbols depicted perform a number of different things. One awards honor points immediately. Others supply buildings, swords or shields. Another causes the corruption track to advance (a BAD thing) while Fomori tokens are readied to be deployed. A last one allows you to collect Tactic tiles that award special one-time abilities.

Now that your Earnings have been collected, it is time to spend them during the Action phase. You are allowed to take up to two actions (one in the first round) and are resolved in turn order. Build simply allows you to construct a building adjacent to one of your previous buildings by following the connecting paths, on another port, bolster an existing building or paying honor points to build an outpost near another player’s fortified location. Repel the Fomori by spending Sword tiles matching the number on the Fomori tile. 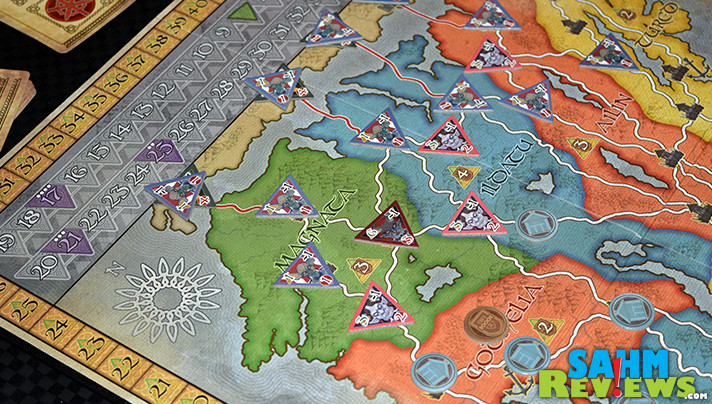 You may also wish to help the Fomori spread, especially to an area occupied by your opponents. One tile is placed in a new area that is directly connected to an existing Fomori encampment. Shields can also be deployed as an action, protecting everyone in that province. Shields must be removed before Fomori can advance and each region has a printed number that is the maximum number of shields that may be placed there. 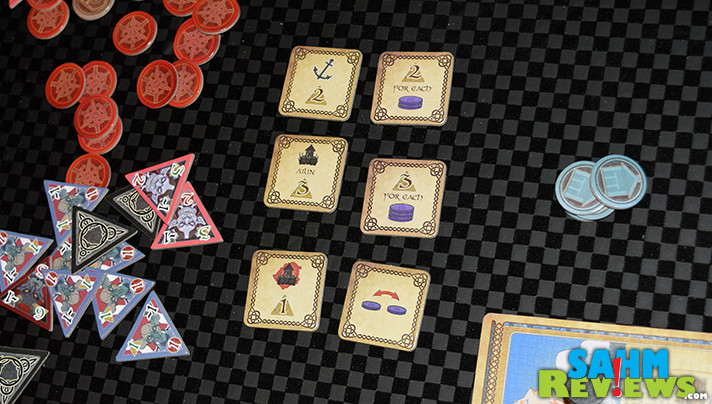 Using a Tactic tile or a Castle Trophy, as well as Passing are free actions that may be taken at any time during your turn. The Tribe Leader who passes first in a round becomes the new first player and receives the First Player tile. After all players have passed, the current round ends. The Corruption track is checked to make sure it hasn’t been exceeded by any Tribe Leader – if it has, the game ends immediately. Otherwise the Round Counter is moved to the next space and a new round begins! 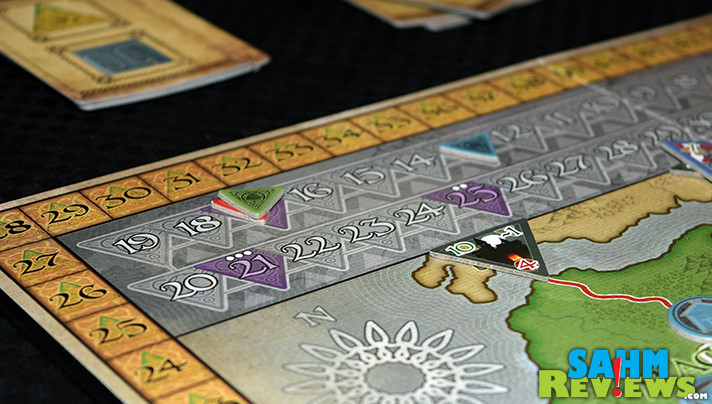 After the correct number of rounds have been completed, locations are counted to determine the winner. If the Fomori occupy and equal or greater number of locations, the Fomori have overrun the tribes. Every Tribe Leader adds up the remaining Buildings, Swords, Shields and Tactic Tiles in their supply and decreases their Corruption by one for every three remaining. The Leader with the lowest Corruption wins, and in the case of a tie, the player with the most Honor wins. 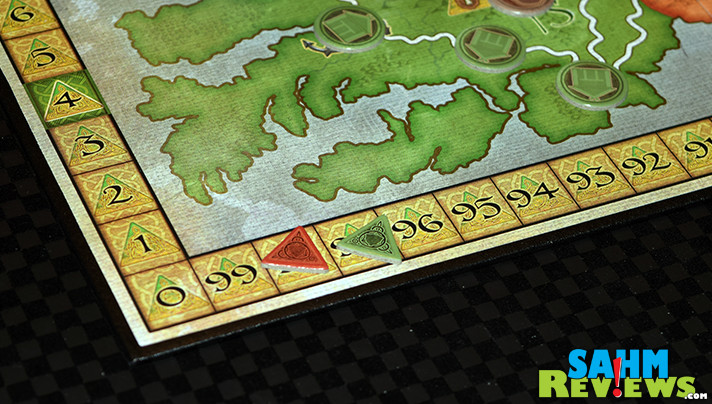 But if the Tribes occupy more locations than the Fomori, everyone prevails. For every fortification, each Tribe Leader receives a bonus determined by the Province in which it was built. All Tribe Leaders add up their remaining tiles and again receive one Honor for every three remaining. The player with the highest Honor wins The Arrival!

While rated for ages 12+, we feel confident in recommending The Arrival for ages as young as eight or nine as long as there is an older player around to explain the rules. You will find your copy on Amazon for just over $30 or ask for it at your local game store! Cryptozoic Entertainment has a number of exciting things slated for release in 2018, so be sure to follow them on Twitter and Facebook so you don’t miss any of them!

What game are you most excited about that isn’t released in the U.S. yet?

7 thoughts on “The Arrival Board Game Overview”