A few weeks ago, we went out to lunch with the family of one of Madison’s good friends. We’ve known them for several years, but only as acquaintances so discussions were generally superficial. I knew they had previously lived in Germany and that the mother was multi-lingual. When she moved to our area, she was looking for a corporate job as a translator while working part time as a travel guide.

So as we sat down to lunch, I knew that Germany would be an easy topic to involve everyone at the table. Scott used to live there and I’ve wanted to visit. During the course of the conversations, I asked her about the Castles of Mad King Ludwig because I find the story fascinating. Castles are cool and visiting one is on my bucket list. My interest in castles coupled with my love of all things Disney is what drove me to want to play Dragon Tower by HABA. 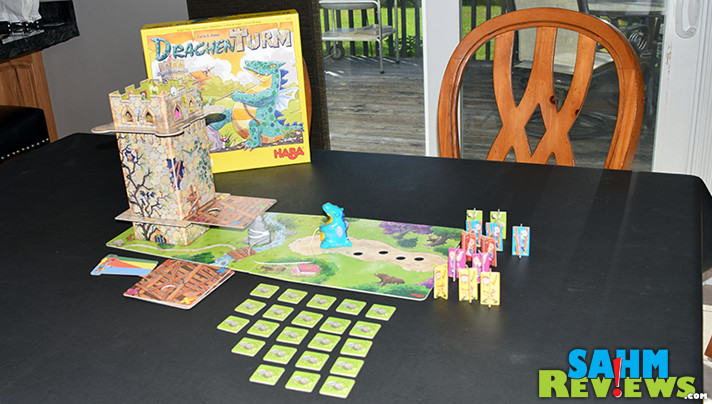 A princess trapped in a tower by a dragon is a classic storyline, but one that we haven’t seen in any of the other castle, princess or tower games we have played. In Dragon Tower, players are working as a team to achieve the common goal of freeing the princess. We are literally building scaffolding alongside the dragon’s tower in hopes that we can free the princess while the dragon is sleeping. 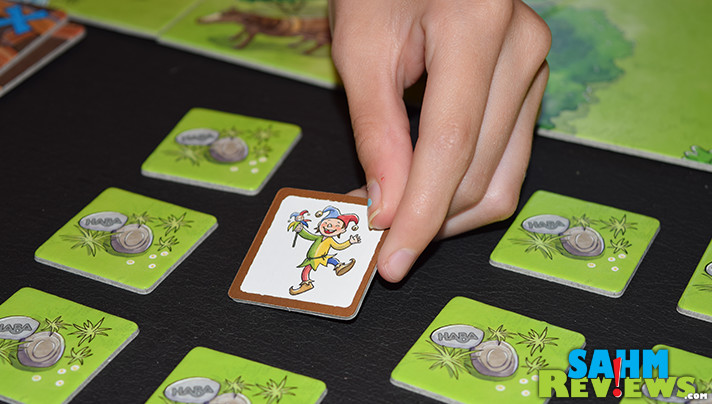 Setup involves assembling a few pieces of the tower then getting the remaining pieces placed appropriately. A string connects the dragon to the rock. You’ll adjust the dragon’s wing and carefully pull the string to its full length before placing the dragon in the first hole closest to the tower. Villagers are set up alongside the board as are scaffolding platforms. There are tiles that represent the various villagers, jokers (wild cards), platforms and dragons. Mix those tiles and flip them face down next to the board within reach of all players. 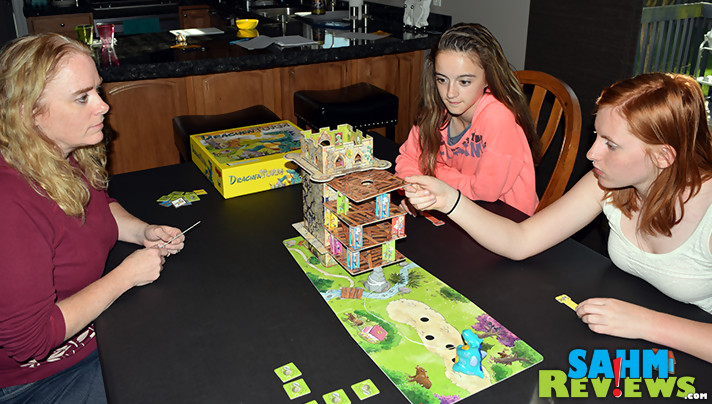 Players take turns selecting a tile in hopes of finding the needed pieces. At the beginning, you’ll need to find villagers that match the colors displayed on the first platform. Once you’ve tracked them down in the grid, you can place it in the appropriate location and discard the tile from the game. If you flip a tile that isn’t needed (either the platform or a wrong color), you’ll flip it back over and move to the next player. If you flip a dragon tile, carefully move the dragon to the next hole in the board. Once four villagers are in place, you’ll need to flip a platform tile. 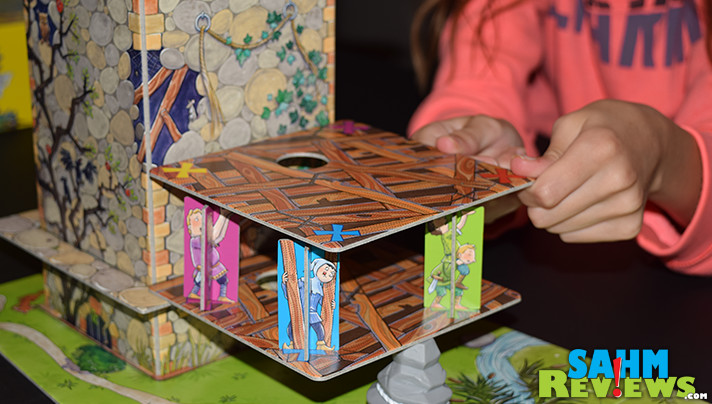 You’ll continue the process of flipping cards and placing platforms until you reach the top of the tower. It’s important to not only be careful how you place it, but also to pay attention to where the different tiles are. You want to make sure you’re flipping the villager and scaffold towers and not the dragon ones! Where the dragon ends up will make a big difference when you get to the top of the tower. 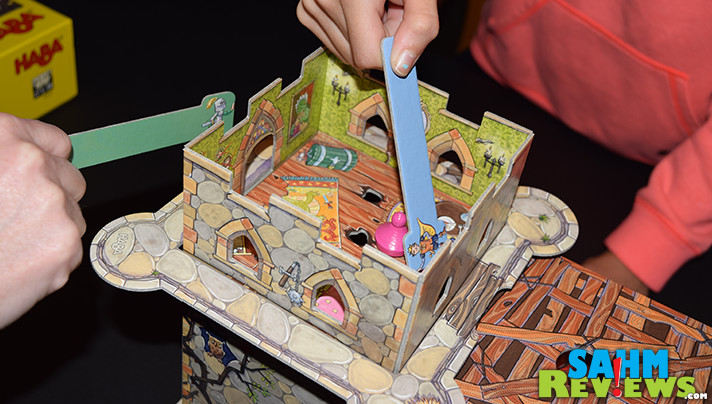 Once at the top, the process of escorting the princess out begins. But it isn’t as easy as running away with her. The dragon is beginning to wake up. You’ll click the dragon’s wing into the top position which activates the timer and begins to shorten the rope… which happens to be connected to the rock that is holding up the scaffolding. 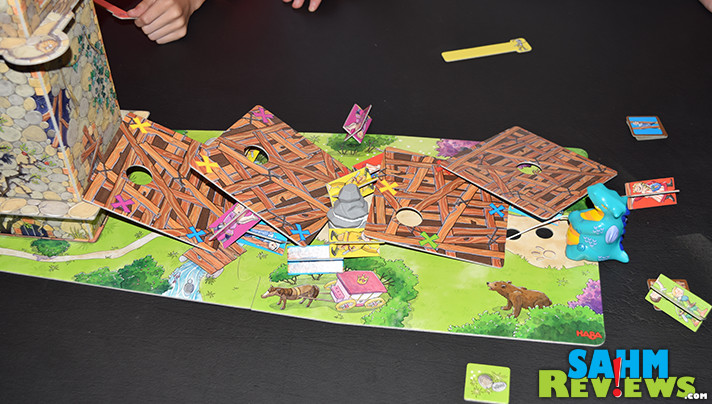 Players utilize their prince or knight piece to carefully maneuver the princess out of the tower, along the balcony and down the scaffolding. All of this needs to be done before the timer runs out! If we’re able to complete the tasks before he wakes up, the princess is free and we win. If he wakes up? Well… when is it ever a good thing that a dragon wakes up?

Utilizing the concepts from the game of Concentration along with color matching, Dragon Tower can easily accommodate younger kids, but is detailed and difficult in process to appease adults who enjoy a good game. It sounds easy, but when you’re trying to coordinate the movement out of the castle with a clock ticking, “easy” is definitely not a word that comes to mind. Available from the HABA website, through Amazon or from your local retailer, Dragon Tower is going to test your dexterity and memory as well as your communication skills. Check out HABA on Twitter and Facebook to find out what other games are hot.

Have you ever visited a castle?