Yesterday was a long day. The final day of the Origins Game Fair and an almost 8-hour drive back to Iowa. Even though we are exhausted after four days of hanging out with friends and playing games non-stop, after seeing all of the great games just released and previews of more on their way in the 3rd and 4th quarters of this year, we know we’ll be back next year to run ourselves ragged.

Over the coming months we’ll be telling you all about some of the things we saw, with more in-depth overviews as always. The brand new Spoils of War by Arcane Wonders is one we got to demo right away, and were surprised that it will supplant not one, but two games we regularly bring to our game nights with family. 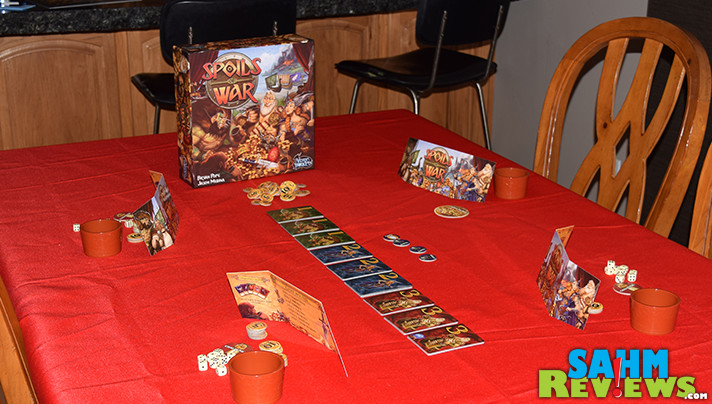 Liar’s Dice is a classic dice game where you roll and bid/bluff about the number of dice and their results. Each time you lose a round, you lose a die from your pool, and eventually the last person standing with dice left wins the game. We found a version at thrift by Endless Games that has some variation to the original rules, but still good enough to remain a standard for us.

The other title is Dragon’s Gold by IDW Games, one we haven’t covered on SahmReviews, but was picked up off our local game store’s clearance rack. In this game you slay dragons and then must negotiate with other players how to split up its treasure. If a decision cannot be made, then no one gets anything (and is a valid strategy!). This game has caused more than one argument and long-term hard feelings at our weekly game night group.

While getting our first demo of Spoils of War, both of these games kept running through my mind. Not because I felt it was just copying the mechanics, but because I was thinking, “Why hadn’t anyone else thought of this before?!”. The marriage of these two games is perfect – let me show you. 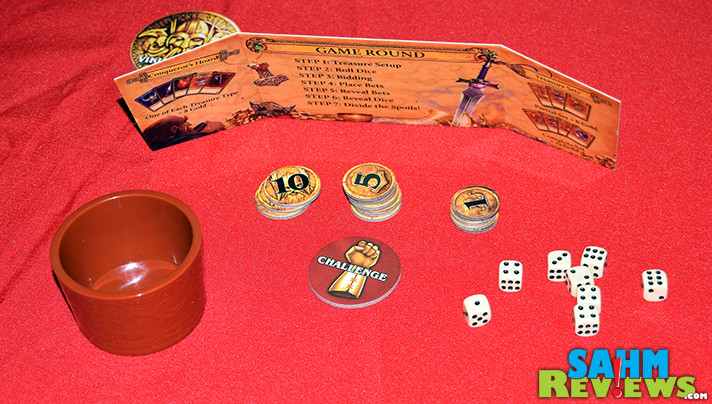 Spoils of War follows a similar story line as Dragon’s Gold, but without all the messy fighting. You and your friends are members of a Viking clan, having successfully completed a massive raid. Everyone is gathered in the chieftain’s tent, discussing exactly how to divide the spoils of war: gems, weapons, armor and magical artifacts! It is decided a game of chance is the fairest way to determine who gets to claim the treasures! 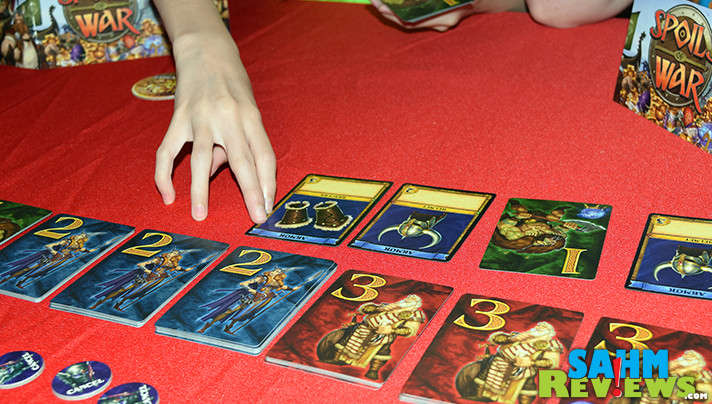 Spoils of War is played over nine rounds, with each round being marked by a predetermined pile of treasures and artifacts. The Viking chieftain for each round (first player) reveals all of the treasure up for bid and lays the cards face-up on the table for everyone to see. Except for the artifacts – these are kept secret as they bestow powerful bonuses and can only be used at certain points in the game. 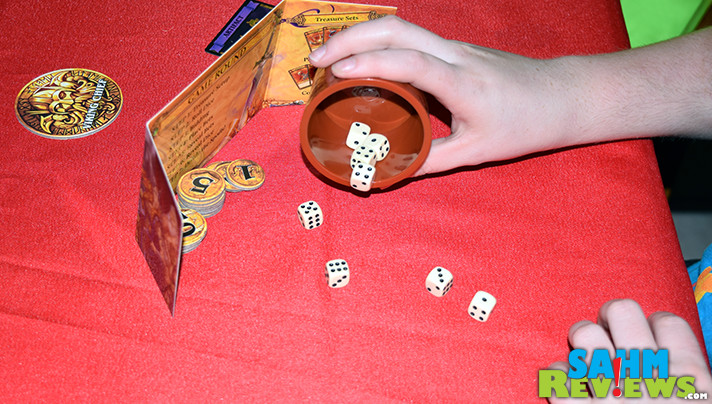 All players roll their dice (quantity determined by the number of players) and keep the results hidden. Just as in Liar’s Dice, a bidding process begins with players determining how many of a certain result exists on all the rolled dice (not just yours). If a player bids, for example, six 2’s, the next player must either up the bid to a minimum of seven 2’s (one quantity more) or six 3’s (one higher value). At some point a player will not believe they are able to up the bid, so they challenge the current high bidder to prove there are as many as they claim. 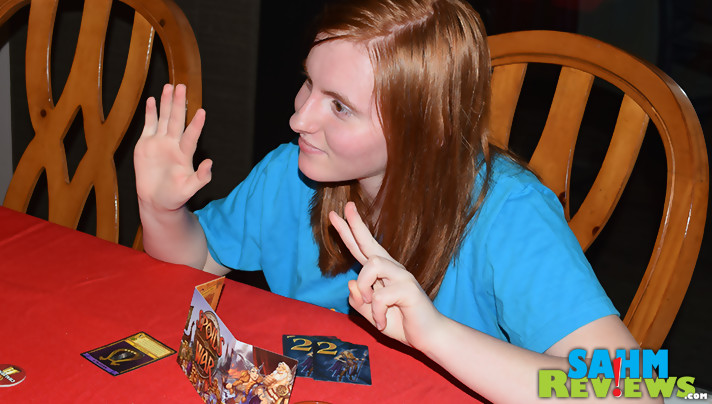 This is where the real difference from Liar’s Dice begins. Instead of the challenge involving only two players (the bidder and the challenger), in Spoils of War everyone is involved by betting on the outcome. At the same time, all players decide whether to bid with the bidder or with the challenger by putting their betting token on the desired side and placing a minimum of five coins on it (your bet amount). Of course, the person who challenged must bet on themselves, as must the original bidder. Bidding against yourself in this situation is not allowed. 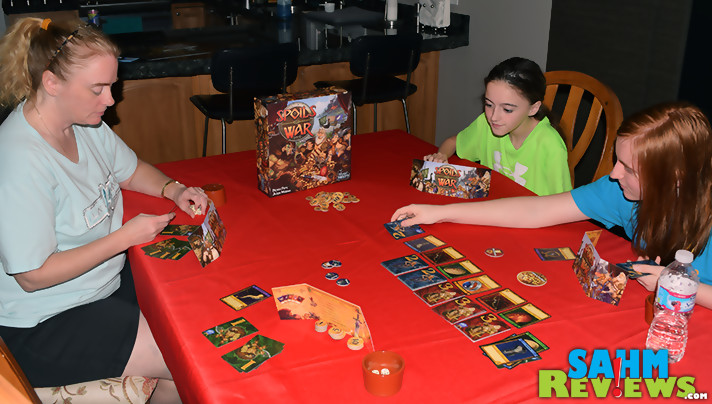 Once all bets are placed, then revealed, everyone reveals the final results of their roll. Anyone who incorrectly guessed the outcome of the bet loses their money to the bank. The players who correctly predicted the result get to choose treasures from the pile! The Viking who bid the highest becomes the new Viking Chieftan, gets first choice and chooses three cards. Everyone else selects two cards in order from highest to lowest bet. Any remaining treasure cards get put into a Leftover Treasure pile, and the winners return their gold bet to their stash. 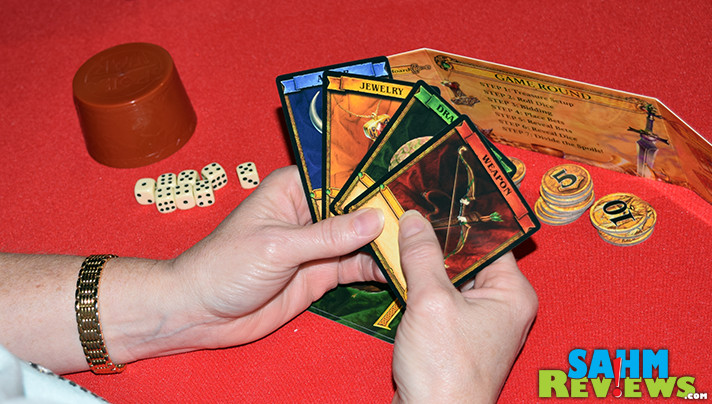 Any artifacts collected remain face-down in your stash until you decide to activate them. They will either have an ongoing effect (for example, allowing you to peek at another Viking’s dice) or a one-time bonus (possibly letting you take a treasure from the Leftover pile). Some cards allow you to steal from each other – no one said there was any honor among these guys!

After nine rounds are complete and all artifacts have been resolved, Spoils of Wars ends. Bonus gold is awarded for collecting sets of 3 or 4 different type of one treasure category. You’ll also receive a bonus if you collected a full set of treasure categories (one each of the four, plus an artifact). Cards can count towards both sets, and if you have enough cards you may complete the same bonus more than once. Add up all of your gold along with the gold value on each treasure you collected and the Viking with the highest amount wins Spoils of War!

Spoils of War has another feature that may have us looking for a second copy for our collection. You can combine two copies to expand the number of supported players to ten! We loved this feature in Calliope Game’s Roll For It and wish there were more titles that had the ability to accommodate a full party of players.

If you’re a fan of push-your-luck games with a side of bluffing and betting, Spoils of War will be your next purchase. You can already find copies on Amazon for under the $40 MSRP and it will be appearing on the shelves of your local game store very shortly. If you can’t wait, order it directly from Arcane Wonders on their website and be sure to follow them on Facebook and Twitter to find out about other new games and special deals.

Didn’t pick up your copy at Origins Game Fair? You can win one for yourself right here! Enter using the form below and don’t forget to come back each day for additional entry opportunities!
Spoils of War Giveaway