One of the few things I miss about living in California’s high desert is the opportunity to be immersed in so much aerospace history. As home of Edwards Air Force Base as well as Lockheed Skunk Works, seeing F-117 Nighthawk Stealth Fighters doing “touch and go” maneuvers was a daily ordeal. One of the highlights was seeing the Space Shuttle piggy back out of the air strip in Palmdale as it headed back home following a landing at Edwards Air Force Base. When we first searched for a home in the area, I recall the mixed feelings of pride and awe when our agent walked us through the home of an astronaut. I was standing in the home of an individual who forged the path for future generations to travel into space. How cool is that?

I’m pretty sure at some point in time I’ve shared that my in-laws retired from Redstone Arsenal in Huntsville, Alabama. Since my first visit to Rocket City, I have wanted to attend Space Camp. A couple years ago, we finally had the opportunity to take part in Family Space Camp and it was as wonderful as I had expected it would be. It made me wish I was 30 years younger and on a path to becoming a space pioneer.

All these things have given me a greater interest in the subject that until then was mostly synonymous with the Challenger explosion, which happened when I was in high school.

Then a couple weeks ago, Huntsville hosted TBEX (Travel Bloggers Exchange) and I had the opportunity to visit Marshall Space Flight Center as one of the pre-event activities. To say I was giddy about the tour was an understatement. Little did I know what was in store for us!

There were several of us that visited George Marshall Space Flight Center. The entire tour group was divided into smaller van-sized groups to explore different buildings. As much as we all wanted to do and see everything, time simply didn’t allow. We visited a variety of places during the tour including the International Space Station Payload Operations Center, Environmental Control and Life Support System (ECLSS) and Friction Stir Welding. Our small group was fortunate enough to have NASA Historian, Brian Odom in the group! We had first-hand historical information at each location. Before the tour, I would have shaken my head at all the acronyms, but I walked away more informed and proud to be from the country that has made (and continues to make) such monumental strides in space exploration. 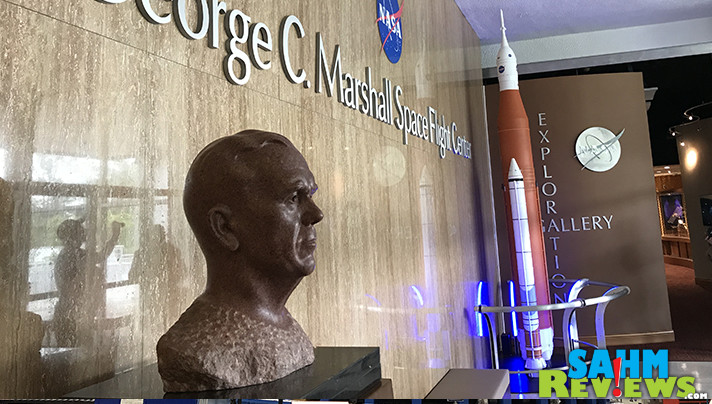 We all gathered outside the George Marshall Space Flight Center Building 4200, the main MSFC administrative building which was home to Von Braun’s office on the 9th floor. They provided us with an overview of the space program, scoop about upcoming tests that will be run, a bit of history and wrapped with a large group photo. After that, we broke back into our small groups and headed out. They actually really rushed our particular group because they said we were headed to the furthest point of all the groups. While I want to walk you through our tour chronologically, I won’t. Why? Because that first stop, the furthest point on the tour, was by far the coolest. You have to wait for those details. 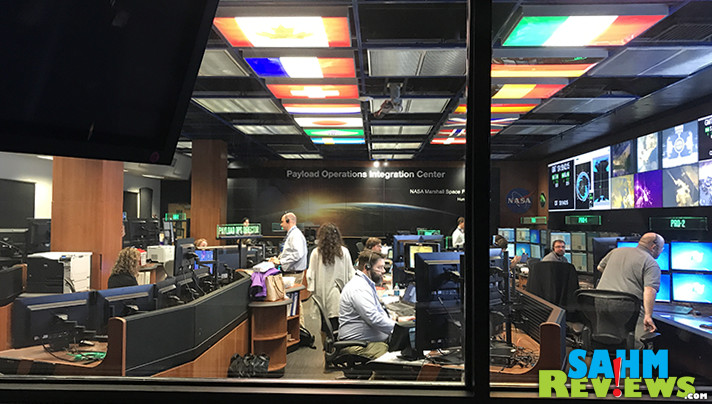 A few days before our tour, President Trump participated in a teleconference with astronauts on the International Space Station. He may have some fancy methods of communication at his disposal but when it comes to getting these people on the phone, it is no normal landline call. All correspondence with the International Space Station goes through the ISS Payload Operations Center right there on Redstone Arsenal in Huntsville. There are a variety of people on staff, 24 hours a day, monitoring the activities, flight path and more. If you’ve ever toured the U.S. Space and Rocket Center then you’ve seen a mock-up of this operations center, complete with all the flags in the ceiling. There was something incredibly ironic about watching these people as they watched the astronauts on the station. 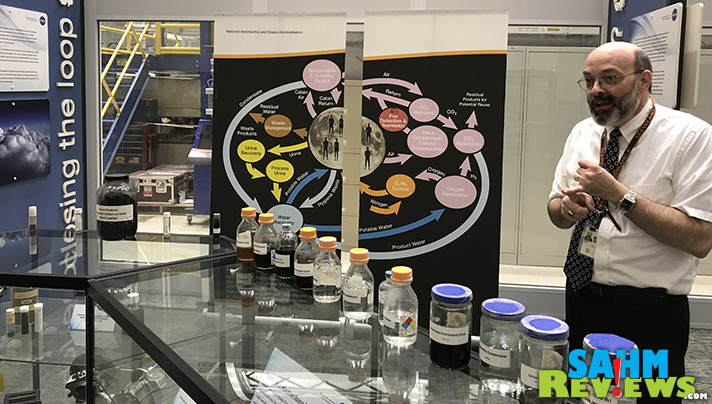 You know what one of those conversations was with President Trump? Astronaut Peggy Whitson said their drinking water is recycled urine. Let that sink in for a minute. Ick. One of the most memorable quotes I heard during the many places I visited involved this concept that yesterday’s urine is today’s coffee and “Today’s urine is tomorrow’s coffee.” But we had an interview with Keith Parrish, longtime employee and manager with the ECLSS. Mr. Parrish provided a very in-depth explanation of the chemical reactions needed to create clean water from urine, saw the equipment used and heard why they go to such extremes. After stepping through the entire process, he wrapped up by stating that the finished product is cleaner than any water the astronauts will ever consume on Earth. Based on the costs associated with launching supplies, the jar of 0.88L of water (weighing in at 1.92 lbs) would cost $48,000 to deliver. Aside from that, it’s imperative that solutions be found to support the Mission to Mars where delivery of supplies would be impossible. 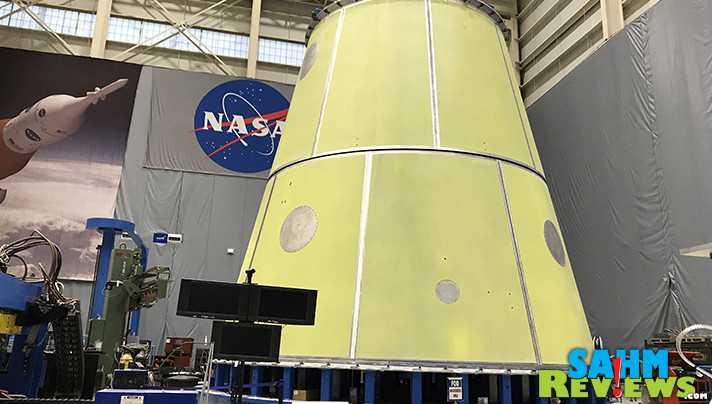 Speaking of Mission to Mars… After learning about how precious water – and everything else needed to survive – is on the space station, we learned about Advance Manufacturing, specifically Friction Stir Welding. If you look at the photo above, you’ll see the horizontal gap between the upper and lower sections that is yet to be completed whereas the vertical welds have been. While a test article was completed last year, this Launch Vehicle Stage Adapter is the “live article” being prepared for a future mission. It was an amazing feeling being right there and seeing it up close. I wonder if those employees ever realize how amazing their work is. 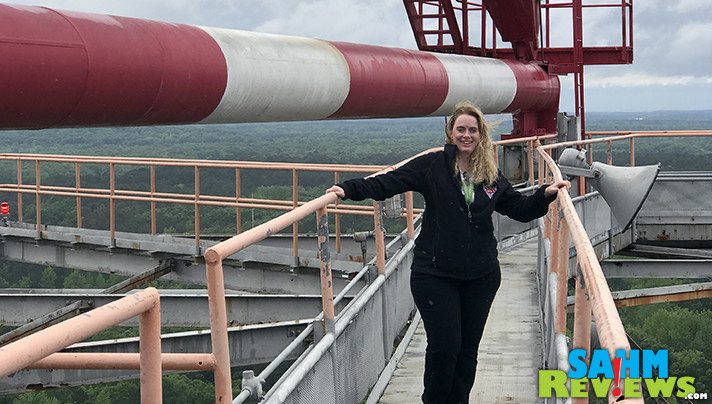 But as promised, I saved the best for last. They took us to the TOP of the S-1C Static Test Stand that was used to test the Saturn V in 1965-66. When we arrived, it was raining so they took us to one of the lower platforms. We learned about the area around it, how it was used and so much that I wasn’t able to absorb it all. Aside from all the concrete that was visible above ground, there was another 40′ of concrete below ground. I remember that one because I wrote it in my notepad amidst the drops of rain. 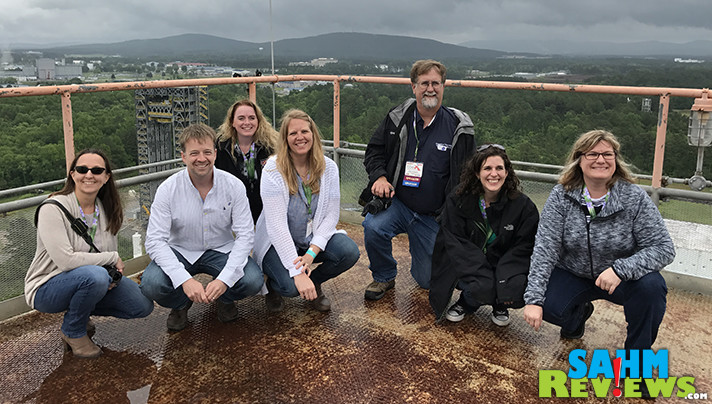 As the rain subsided, our group collectively requested a view from the top. This was the first stop on our tour of all the above mentioned locations, but this was truly the highlight. This was amazing. This was breathtaking. THIS was part of history. 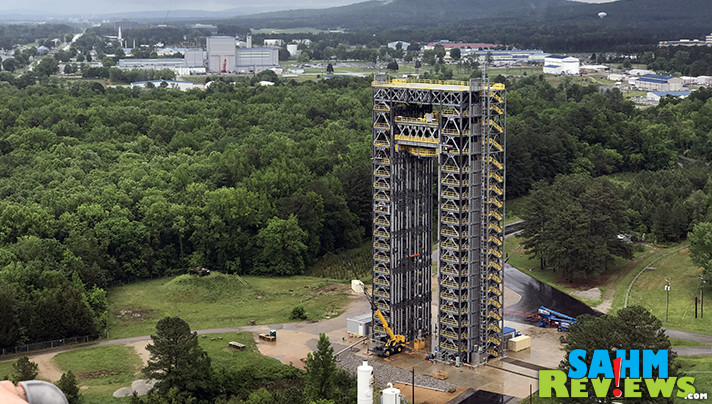 From where we stood, we could see the new 21-story Liquid Hydrogen Test Stand. On the opposite side, we were able to see another test stand loaded with the “test article” from Friction Stir Welding. We were in awe of the view and the details of the site, so our guides gave us more than the allotted time and agreed to make up ground elsewhere.  I think they knew it would be like herding cats to get us to leave that platform any sooner than we were ready. 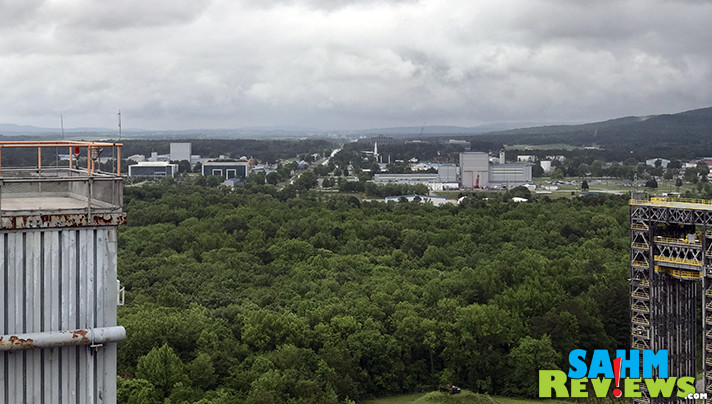 Of course, I would be remiss if I didn’t add a photo of the view of Huntsville, Alabama from the top of the Saturn S-1C Static Test Stand. As many times as I’ve visited Huntsville over the years, this is the first time I’ve had a view of it like this.

If you are looking for places to visit, Huntsville is rich in history and technology and well worth adding to your bucket list. While you’re at it, look into a trip to Space Camp to round out the experience!

Would you want to be part of the crew on the Mission to Mars?