It is so hard to find good games that play more than four people. Oh sure, they are out there, but there is certainly a sweet spot for number of players in any game. Just because a game says it supports 2-4 players doesn’t mean it is as fun with two as with four (or vice-versa). Rare is the game that plays as well with the minimum compliment of players as it does with the max. I think we’ve captured one of those rare beasts in Costa Rica by Mayfair Games. 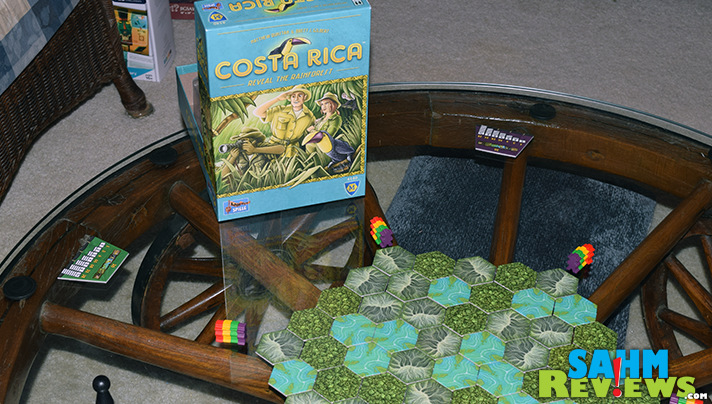 I first had the opportunity of playing this brand new title at the Origins Game Fair, where Mayfair Games was demonstrating it in giant form. This is the place I’d usually show you a photo of that experience. Sadly, I was having too much fun playing the game to even get a shot of it! And I know I wasn’t the only one disappointed to discover it wasn’t for sale at Origins – but it would be shortly!

(pretend the photo is here)

What’s cool about Costa Rica is for a 45-minute game there sure are a lot of decisions to be made. Nearly all of them will affect your (and your opponents’) final scores. Let’s begin the expedition. 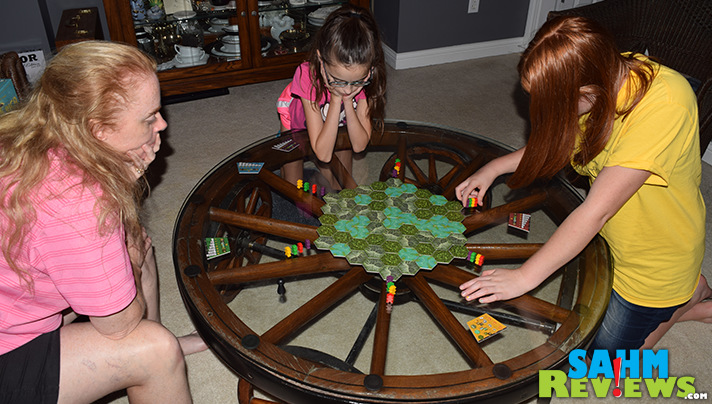 As you probably already guessed, in Costa Rica you are in control of six explorers who join six different expeditions into the Costa Rican forest. You are tracking native animals, attempting to count as many as you can without encountering too many threats. To begin you create a hexagon of randomly places tiles from the three different region types (wetlands, forest, highlands).  One token from each player is set at the corners of the playing area, creating the six expedition groups. 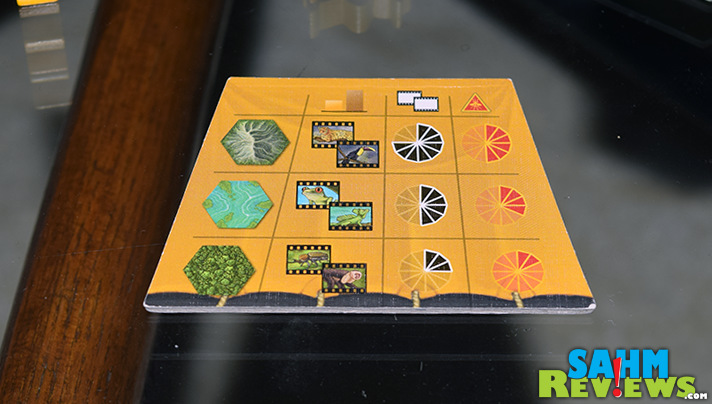 On the back of each tile will be one or two different animals native to that area. You also have a handy “cheat sheet” that relays the likelihood of two animals appearing (instead of one) and how often a threat (mosquito) appears in that region. 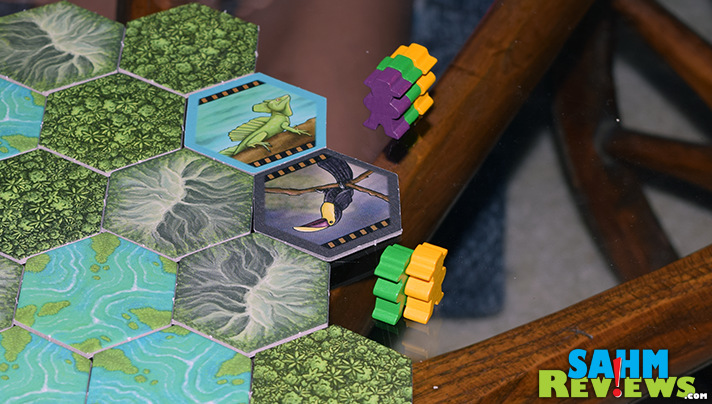 Each player on their turn decides which group they would like to lead and turns over an adjacent tile. At that point you must decide whether or not you wish to collect the tile or pass to the person on your left. They then get to make the same decision, also passing to their left if they opt to not take it. If “passing” goes all the way around and back to the expedition leader, he/she then turns over another adjacent tile and makes the same decision – except this time it is about whether or not to take both tiles! Definitely a press-your-luck component! 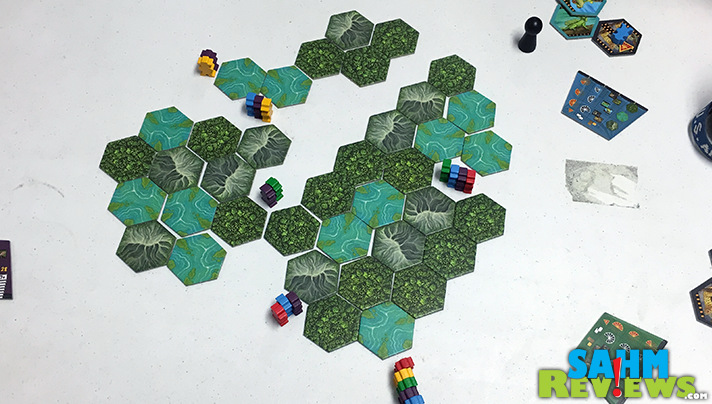 Once someone takes the tiles, their token is removed from that expedition and they may not participate in the group any longer. Ultimately every player should have the opportunity to collect six groups of tiles unless their expedition is cut off. Yes, even in Costa Rica the actions of other groups can (and will) affect you. Because your group moves through the region taking tiles, it is very likely that at least one expedition group will be cut off from the rest and not have any tiles to uncover. Hopefully by the time that happens you have already gotten your animals from that group!

Each region has two animal types, one slightly rarer than the other. At the end of the game you will score increasing points for how many of an animal you have collected (eg. 1 pt  for one, 3 pts for two, etc.). You will also receive a 20 point bonus for each complete set of six animals you have in addition to your normal set bonus. 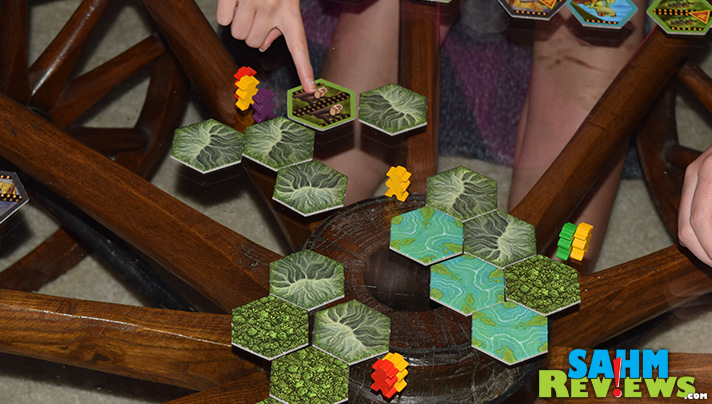 But you can’t forget about the threats! If you reveal a tile with a red triangle (mosquito), nothing happens at first. However, this will affect your decision on whether or not to proceed as a second mosquito will cause your expedition to end, the two tiles with threats on them being removed from the game and you receiving only the other tiles. And of course no longer having an explorer in that group.

In the two weeks we’ve owned Costa Rica it has made it to the table for no less than 10 games. We absolutely love the short play time and the interaction that goes with either taking animals the other person was collecting (your collections are public knowledge) or cutting off a group completely. You wouldn’t guess it from looking at the box, but it is a lot more social game than you would expect. 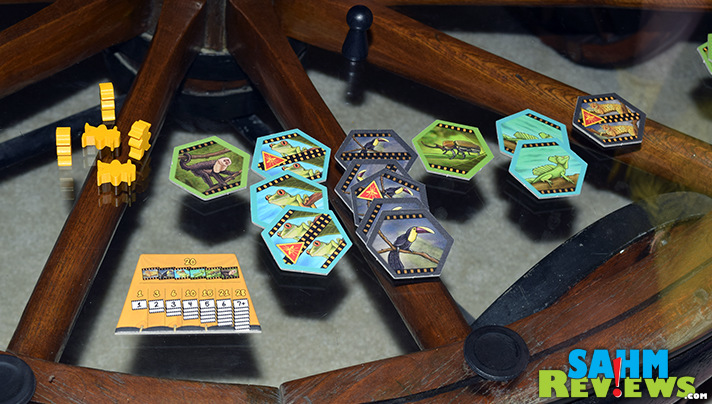 Costa Rica supports 2-5 players and could be enjoyed by almost any age. Having played it with 2, 3, 4 and 5 players, we can honestly attest to the balance and most importantly the fun at every size.  And at a retail price of only $35, it is probably one of the best values we’ve seen so far this year based upon how many times we’ve played it, and will continue to play in the future. These are the same people that were behind one of the most popular hobby games in the last 20 years, Settlers of Catan, so you know when they put their name on the box it is a seriously good product.

If you’re headed to Gen Con, be sure to get to Mayfair Games’ booth early. They are expected to have copies available, but this should be one that sells out quickly!  Alternatively, watch Mayfair’s Facebook and Twitter timelines to find out where they’ll be next so you can meet the team in person!