Every Sunday for nearly the past two years we have brought to you a game we’ve found at a local thrift shop or yard sale. We’ve paid as little as a quarter to as high as $6.88 for ones we really wanted in our collection. What I neglected to mention is that we are also huge fans of attending local estate auctions and regularly find deals up for bid. I recall picking up an unplayed copy of Munchkin last year for a dollar and lost count of how many copies of Scrabble and Monopoly we saw sell in stacks of games for a buck or two.

Just outside of our Quad City metro area is the small town of Cambridge, IL. There you will find Stenzel Auction, an auction service that has seemed to have cornered the market on quality auctions in our region of the state. Almost every Sunday they hold some type of auction, either collectibles or estate, and regularly see their attendance figures top well over 300. We’ve been going there for the better part of six years, usually a half dozen times per year. What we enjoy is that every week they take the time to post photos of what will be for sale that week, so we can decide whether or not to make the 45-minute drive to that rural part of Illinois.

Last Sunday I noticed some things in the photos I could not pass on. At least three stacks of board games with many others strewn throughout the auction lots. Among them were two I had already put on my virtual want list (and both based upon 80’s-era video games), Pac-Man and Zaxxon. Last year I found a sealed copy of Pooyan (another video-game-turned-board-game) at the same auction house, and it was then I decided that a small collection of video game related board games might be fun to own.

Imagine my elation when upon arrival I discovered Zaxxon was also still in its original shrinkwrap and Pac-Man was complete and in great condition. I was concerned about the number of people hovering around the pile of board games though. There were other older games in the stack – Leave it to Beaver, Huckleberry Hound and other 60’s-era games. As it turns out, that’s what the others were after and were willing to pay for them! Most of those brought over $20 each!

Long story short, I was able to win both Pac-Man and Zaxxon for only $5 a piece. Probably a little more than they would have been at our local Goodwill, but someone else might have grabbed them before me, so I was very pleased with the price. 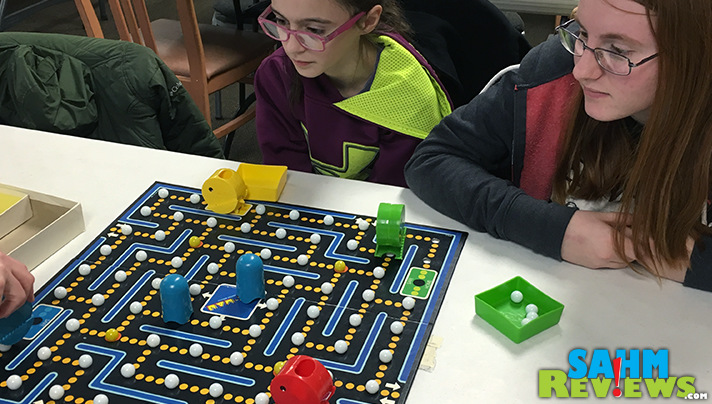 Zaxxon will remain in its wrapping, but for Pac-Man we couldn’t wait to get it to the table. In fact, we dropped by our local game store’s Sunday game day and got right to playing! 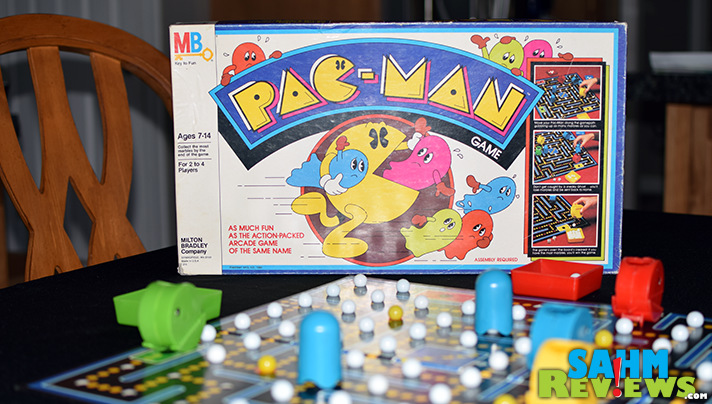 Unless you’ve been living under a rock for the past 40 years, you already know who Pac-Man is and what he does. But how was Milton Bradley able to adapt this classic video game title to the analog form of a board game? 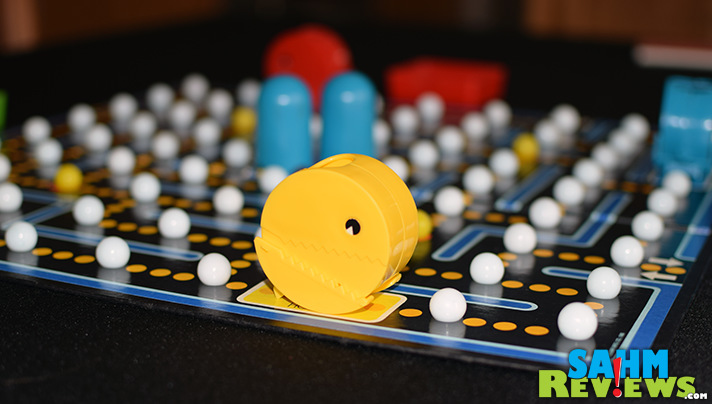 Instead of colored ghosts and an individual Pac-Man, each player receives a different color Pac-Man and two blue ghosts are placed in the middle of the board. Each ghost is cleverly designed to let you ‘eat’ the white marble pellets, while simultaneously keeping them inside the body. 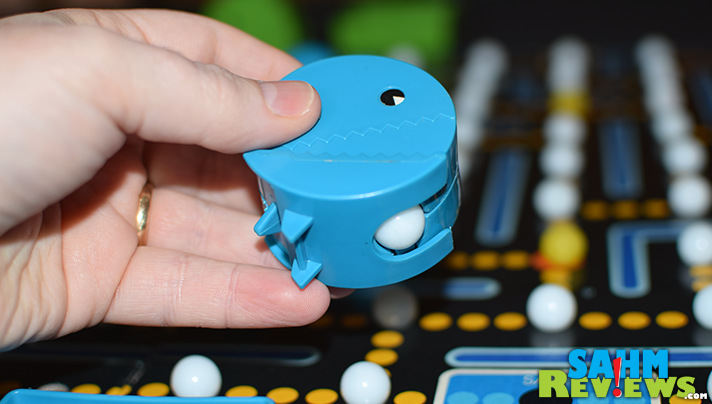 On your turn you roll two dice. Choose which number to move your Pac-Man in one direction (you can turn, but not change direction on a turn) and use the result of the second die to move the ghost in the same manner. Your obvious goal is to collect more of the pellets than your opponents by the end of the game, which is triggered by the last pellet being eaten. 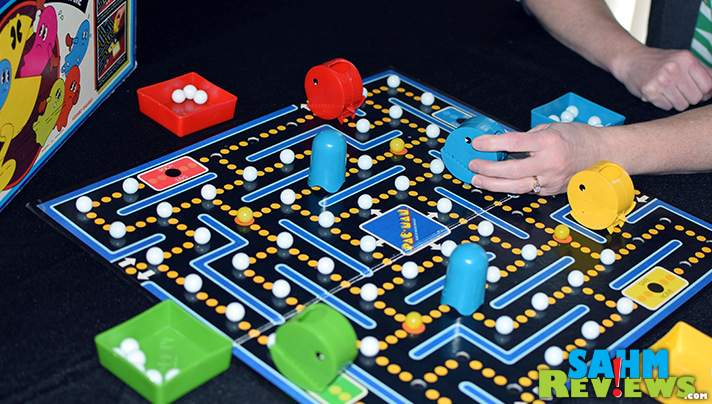 Each Pac-Man starts on his or her own safe spot (home) which ghosts cannot pass through. When moving, you must move the full distance of your roll, and if you cannot, you must move in a different direction. Trapped and can’t complete a valid move? You then stay put and move on to the ghost move.

If you are able to force a ghost into eating another player’s Pac-Man, the ghost stops in that spot, their piece is sent back home and they are forced to give you two pellets from their collection! 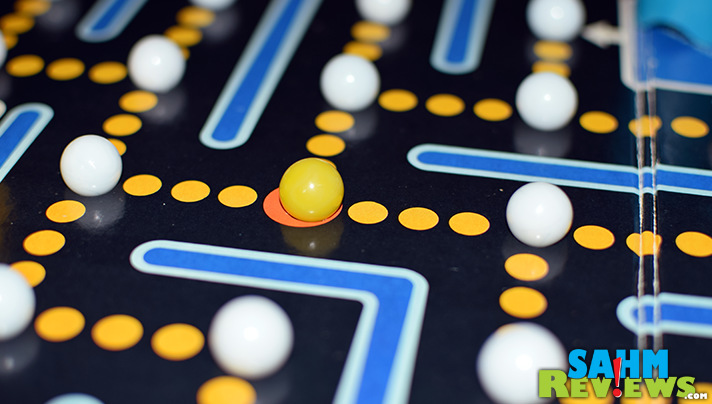 You’ll also recognize the familiar yellow spots which typicall turn your Pac-Man into a ghost-eating machine. These yellow marbles do the same thing in the board game, but don’t have to trigger immediately. Save them for when a ghost is within reach and announce that you’re using it to eat the ghost. The yellow marble is returned to the board to become active again, and the ghost is sent back to its home in the center. You can also choose to collect two white marbles from ANY of your opponents as your reward! 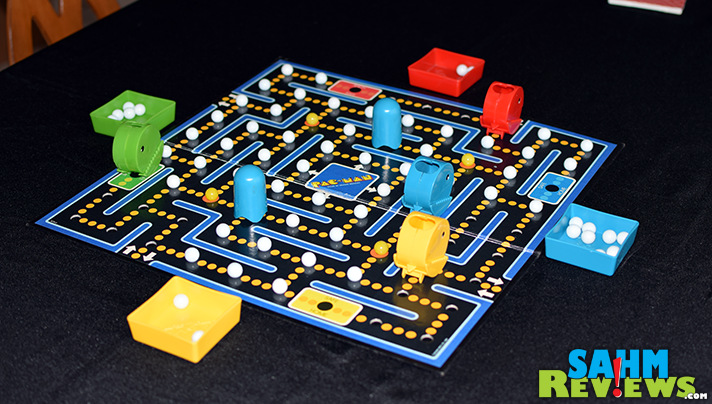 Also familiar should be the side escape routes that ‘port’ you to the other side of the playing area. In this board game version, only Pac-Man can utilize these routes. They are strictly off-limits to the ethereal. Once all white marble pellets have been claimed, compare your totals (yellow are worth zero) and the highest wins! 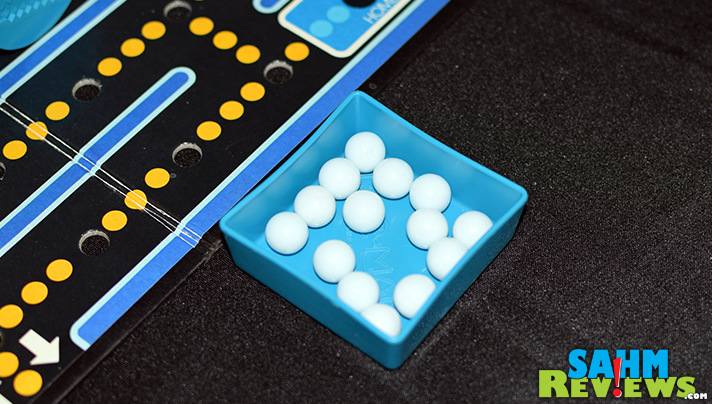 Playing this Pac-Man board game was certainly a flashback for us, especially my wife who once owned a copy. Both girls thoroughly enjoyed it and played very aggressively, sending the ghosts after their parents at every turn (I didn’t realize Pac-Man was a team sport!).

Want to relive your video game youth like we did? Find copies of Pac-Man on eBay for semi-reasonable amounts or keep your eyes open at your local auctions and yard sales. Make sure all the parts are included if you find one as I imagine finding replacement parts could be quite difficult! And if you ever come across any of the other video game style games from the 80’s like Berzerk, Defender, Donkey Kong or others, drop me a line – I still need those for my collection!