Last Spring I remember asking my oldest daughter about how she liked her new Pokemon game she received for Christmas. I had seen her playing it daily throughout Winter break, but hadn’t once school was back in session. I figured it was because of the demands of homework, after-school activities and the like, so the answer I got surprised me. She said all her friends were now into anime and had started abandoning Pokemon.

We talked about how she shouldn’t let her friends dictate what she liked, and that it was OK to hang on to something she enjoyed, even if her local friends had moved on. But I could still see her struggling with feeling left out when her friends talked about a new anime series or an episode they had just watched. It was around that time that I received an email from game designer Tony Gullotti telling us about a game he co-designed, Yashima, which would make its debut at GenCon, the largest board game trade show in the US. 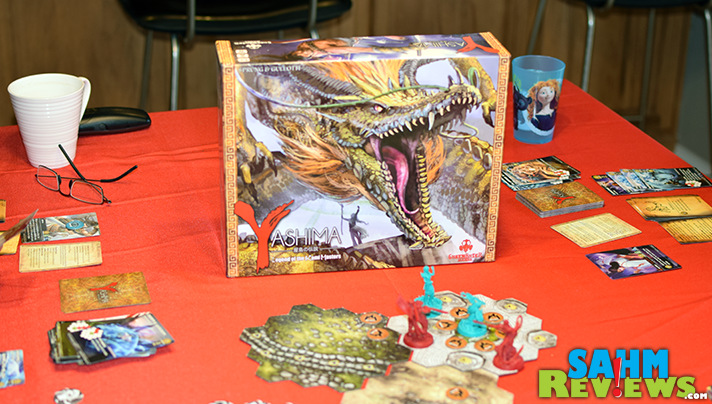 The styling of Yashima is anime-meets-fantasy, and can simply be described as a 2-4 player battle royale. This would certainly be an upgrade to the Pokemon card game my girls have played, and as a bonus, Yashima features plastic miniatures for its characters! But this is where the ‘simple’ ends. Yashima is a heavy strategy competition disguised as a board game! 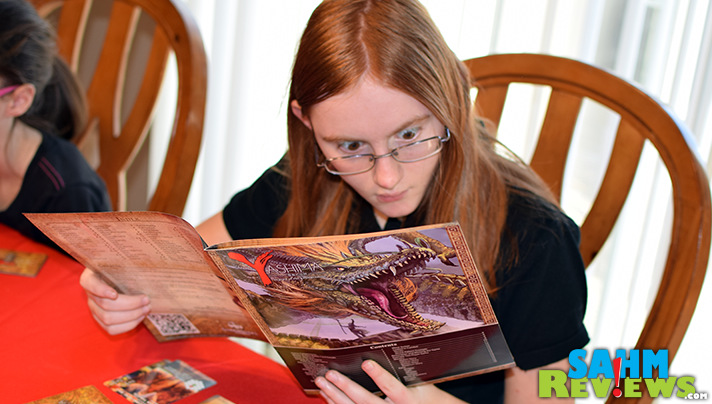 I lost count of how many times I went over the rules, watched instructional videos and consulted online FAQs to try and grasp exactly how to play. All I know it was well over 20 hours and I still had to consult the rules while we played our first few games. This is not to say the rules were insufficient, but a testament to the potential complexity of the game. 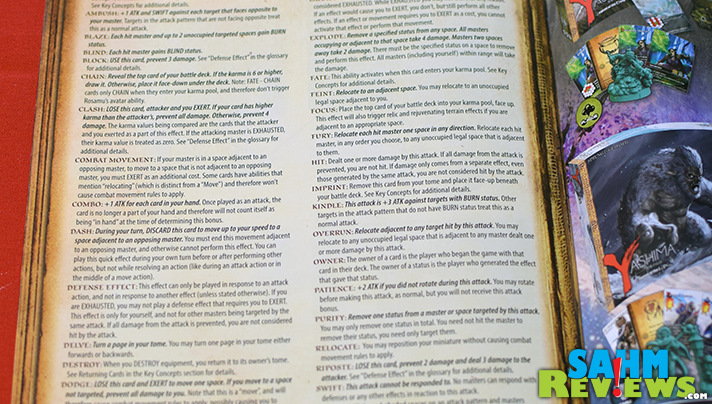 As an example, there is a full glossary of terms used throughout the game in the rulebook that we found ourselves consulting quite often. Yashima make Chess look easy – in Chess you move one piece and hopefully set yourself up to trap your opponent. In Yashima you move your piece, consult your tome, gain and spend karma, attack your opponent, avoid terrain obstacles and more. 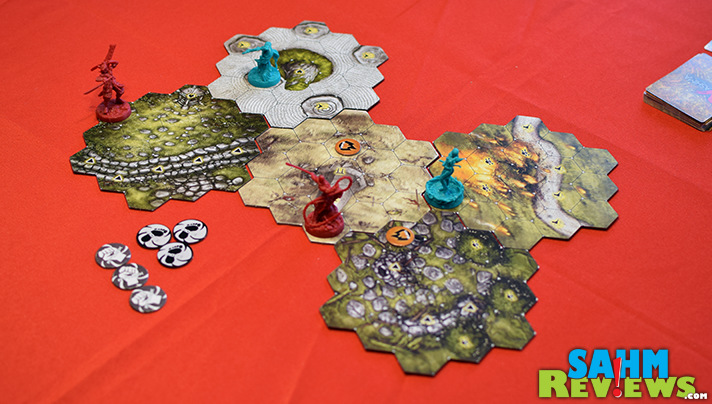 In the box you’ll find four plastic miniatures. (Note – check the quality of yours when it arrives. One of ours was defective, but we had fortunately picked up a promo copy in a different color at GenCon that we were able to substitute). If it happens to you, I know for a fact that Greenbrier Games has a very responsive customer service department and they should be happy to make the game right for you.

Each of the four “Kami Masters” (the people you play) has a custom deck of cards. You also get to choose a “Kami”, or spirit animal, in which to team up with. They also each have custom cards that you shuffle into your master deck, creating sixteen possible player/animal combinations! 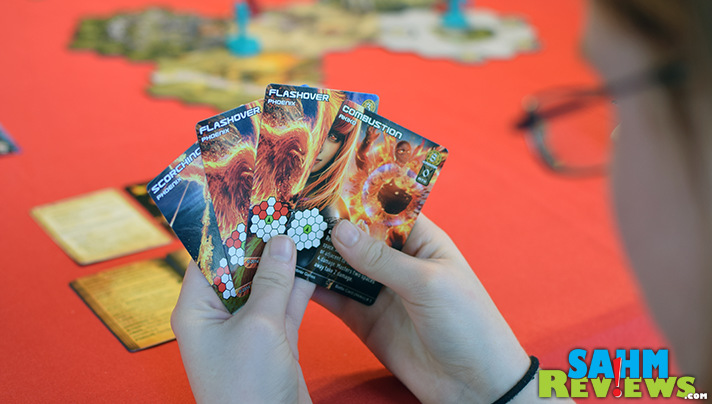 These cards are the crux of the game and can be used in a number of different manners. Flip one to your karma pool (the game’s currency) and received karma credit to be spent on spells. This same deck also represents your master’s health. Take five damage and you must permanently discard five cards! Run out of cards and you cannot win (although there are options to restore and continue playing – you’re not completely out of the game). The cards also represent your attack ability, with each card sporting a hex map showing the location of your master and the target areas it can attack. One card, three uses! 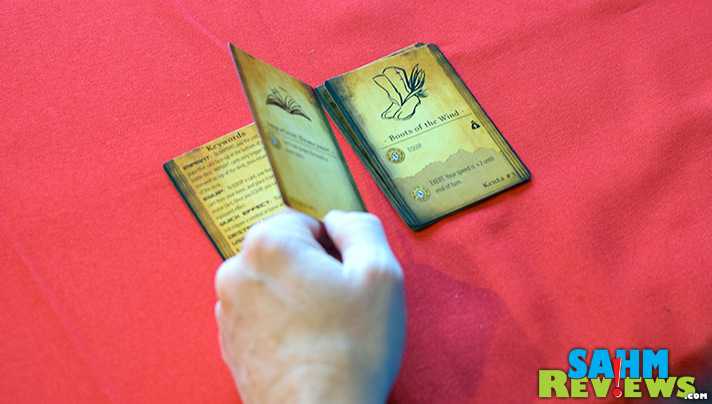 Then there’s the tome. Turning pages opens up more powerful (and more expensive) spells and abilities. Each player has their own tome with completely different rewards, some more powerful than others.

Rather than go on and on about how to play, the tactics needed to be successful and what all the glossary terms mean, this is a case where a picture is worth a thousand words. And this video many times that.

I might best describe Yashima as Magic the Gathering meets Chess without the bottomless pit of packs to buy every month. I cannot stress enough how much strategy will be needed to be successful and this definitely isn’t a game you’ll master on the first few tries. The varying terrain, sixteen player/animal combinations and unique card mechanics make this a title that I wish more people owned, if nothing else to just sit and discuss tactics and methods. If judged on the number of play variables alone, Yashima would win hands-down over any game I’ve played over the past 5 years. 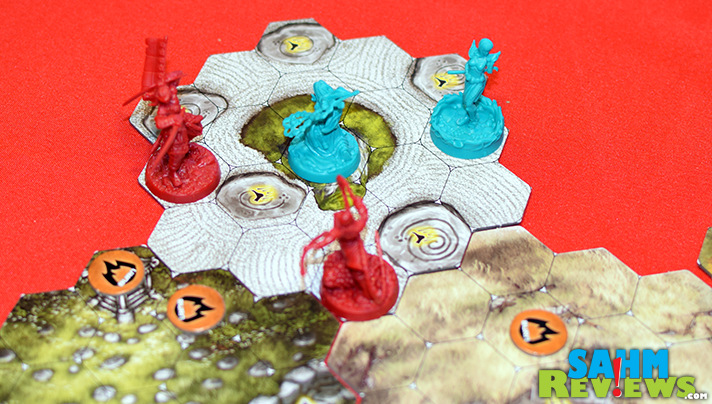 It is hard to believe that a game this complex and with above-average components can be found for under $30 (MSRP $40). If you like heavy ‘thinkers’ and have opponents that are willing to wage battle many times over, then you’ll more than get your money’s worth out of Yashima. It is definitely a game that will take 10-15 plays to really grasp all of the tiny nuances and learn what each master & Kami does so you can respond correctly. If you’ve read this far, I’m certain you’re that type of person! Don’t be scared of the 14+ recommendation either – after a few plays our 11yr old got grasp of it and just about pulled out a victory!

Supporting 2-4 players, incluced are additional rules for team play, which we haven’t tried yet. From reading some of the online forums, team play brings even more to the table and is quickly becoming the preferred method of play! Find your own copy on Amazon or direct from Greenbrier Games! Yashima is certainly a game screaming for expansions with new characters, animals, terrain and more. Keep your eyes on their Twitter and Facebook timelines for surprise announcements!

These are the four animal spirits you can control in the base game: Tortoise, Phoenix, Tiger & Dragon. Which would you choose to master?