I have to believe that I’m not the only mom in the world that has a problem getting kids to agree to try new stuff.  Yes, they’ll “take just one bite” because we tell them they have to but they have their mind made up way before any of the food hits their taste buds.For example, in the past, I’ve had them try things like cashews, desserts, various fruits or vegetables or other foods.  Their canned response is always “I like it a little.”  When I tell them, that something is mine and that’s okay if they don’t like it… wouldn’t you know… they all of a sudden realize it’s worth taking.  It totally has to be their idea.

Don’t get me wrong, they do a great job of trying out new stuff and eventually realizing it’s really good.  Both my kids have consumed non-kid foods like salmon since they were old enough to eat solid foods.  Hooey on the idea of making separate meals for the kids.  As a family, we had chef salads the other night.

But for some unknown reason, they are stuck in a cereal rut.  I’ve bought various cereals for them to try and they always react with total distance.  Nope.  Only like it a little.  Would rather have (anything else).  C’mon kids.  Dad and I like to eat Cookie Crisp and Golden Grahams.  We’re buying it and you’ll have to just deal with it.  Nah.  Miss K is perfectly happy with a granola bar, cottage cheese or a toaster pastry.  Miss M could live on chocolate Malt-o-Meal and Cheerios.

So when offered a chance to review General Mills Big G Cereals, I accepted – knowing that if the kids didn’t eat it, I certainly would. Oh yeah… DH would too.When our package arrived, it was a box of Lucky Charms. DH continually tried to talk the girls into eating it but they kept going for their tried and true favorites. He even said “Mom needs to review this so she can keep getting more stuff in the mail.” They tried it and, as usual, said “I like it a little.”

Well this past weekend the girls stayed with the grandparents so DH and I could celebrate his birthday at a Gaelic Storm concert. When I woke up the next morning, I headed to the kitchen to bask in the glory of a child-free bowl of Lucky Charms and uninterrupted newspaper reading.

Unfortunately, my Lucky Charms were gone. Someone had snuck into the house while we were at the concert and stole the friggin’ Lucky Charms! My Mom Blogger Club review box of Lucky Charms. What’s with that?

Come to find out that when my parents had stopped in to let the dogs out and feed the fish (which I had asked them to do while we were out of town), they decided to snatch the Lucky Charms. You know how I found out? The girls proudly told me that they had Lucky Charms for breakfast that morning at Grandma’s. The following morning, they asked for it again. And again. Funny since they only liked it a little. 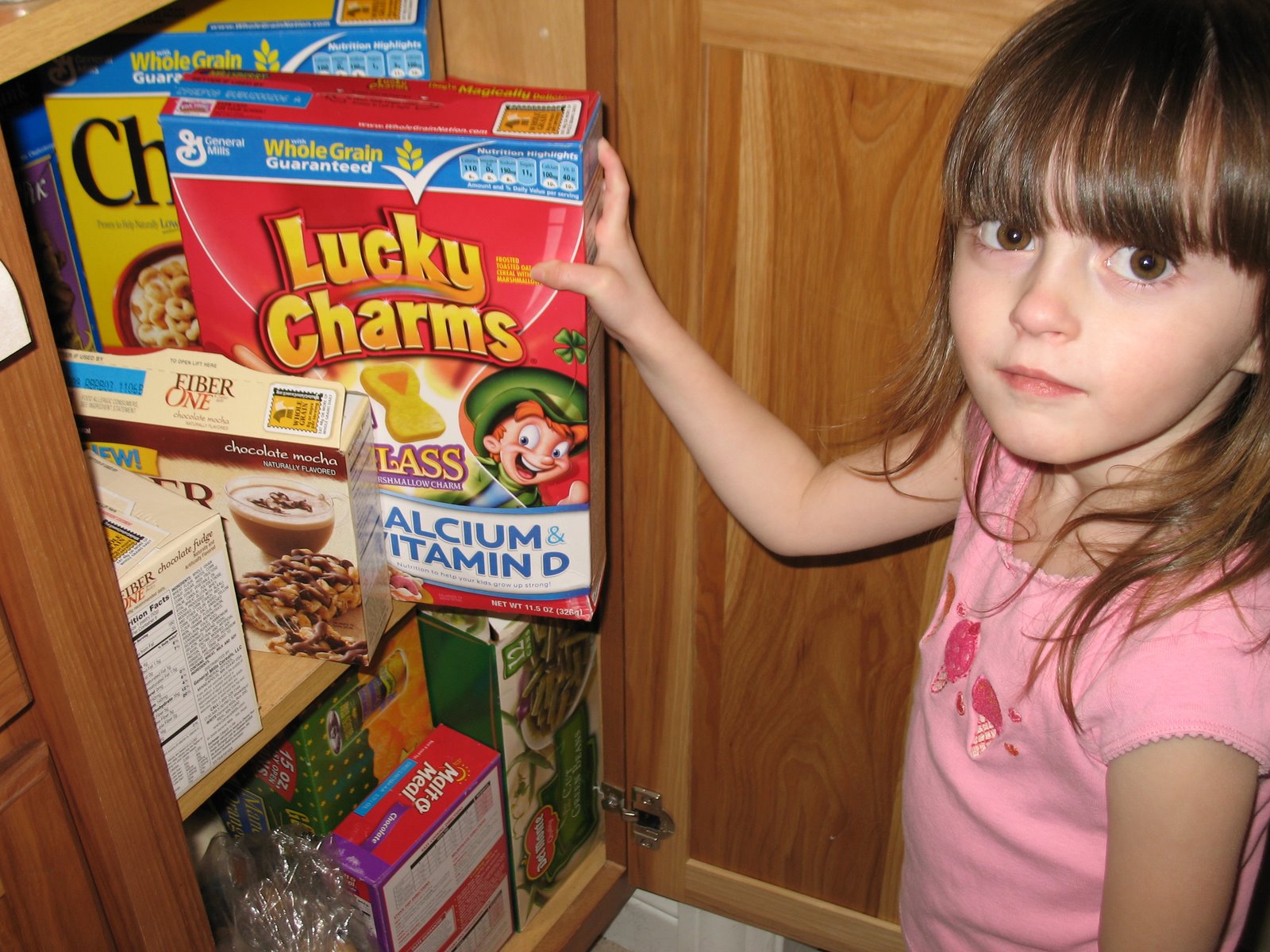 As Miss M sat in front of me eating, she pointed to the box and said “This makes you big and strong.” We sat and chatted a bit and I found out that the marshmallows are her favorite part and that she really likes Lucky Charms. Miss K – well, she likes them too.

So why is it that I’m promoting a cereal?  Because it’s a great source of Vitamin D and Calcium. Here’s a clip from the Grow Up Strong website:

“As a parent, you can easily help your child get more of these two nutrients by looking for calcium and vitamin D fortified cereals, milk and juice. All General Mills Big G kid cereals (including Kix, Lucky Charms, Trix, Cinnamon Toast Crunch, and more) offer a good source of BOTH calcium and vitamin D in each serving.”

I don’t encourage my kids to eat foods that I don’t feel are healthy alternatives, but I believe that having well rounded taste buds is important to their growth.  If they are educated at a young age, then I believe we won’t have the childhood obesity problems that seem to be so prevalent in today’s society.  Is it something you have considered?

I’m not going to get on a soapbox about that but I do want parents to know that companies like General Mills are taking nutritional issues to heart and trying to better their products as a result.

Now excuse me while I go hide the Lucky Charms so I don’t have to share them at breakfast tomorrow.