Skip to content
On my personal blog, SAHM Ramblings, I tend to tell stories of the different types of places and activities that we like to expose the kids to. Some of the things we do make the blog, but others may have occurred before I started. But to sum it up, we take them to events that some parents might not think that kids this young would enjoy. For example, Rock and gem shows, coin shows, auctions, conventions, cultural events, movies and even a concert like Trans Siberian Orchestra.

Well, last year within a few weeks of starting my blog, we took them to see the circus but I wasn’t comfortable enough with my blog yet to have told about it.

Recently, Mom Central gave me a reason to tell about it – a blog tour for Ringling Bros and Barnum & Bailey Circus. Just so happened to be which circus we had gone to!

I wasn’t sure how the kids would like it. We bought our tickets late and I went for the inexpensive seats. I didn’t know if we would be able to see the details of what was going on or if it was just going to be a confetti of noise and chaos.

When we arrived, we headed to see the animals up close in an outdoor display area where they were caged. Since we knew we had nosebleed seats, we figured this was a great opportunity for the kids to really get a grasp on just how big the animals are. 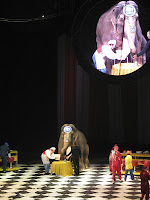 Once inside, we were pleasantly surprised by the open floor plan and the pre-show entertainers. Everyone was allowed to go all the way down to the floor where the show was going to be put on and see things like an acrobat twirling on a hoop, an elephant painting a picture and numerous clowns. The kids were right in the thick of it. It was educational also because they talked about things like the visual differences in difference types of elephants. I honestly thought all elephants looked alike until I attended the circus!

Once the circus actually started, we were thrilled to see that there was a large projector showing the main events up close. So you could watch it live, but if you really wanted to see something specific, you just checked out the circus version of the jumbo-tron. 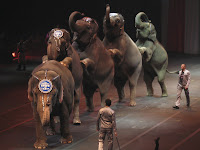 If my parents had ever taken me to the circus when I was a kid, I regret that I don’t remember it. It was amazing to watch the elephants stack up, the motorcycles swirl around inside a tiny sphere without crashing into each other, acrobats flying through the air, tigers performing beautifully, horses prancing around the stage and clowns doing what clowns do.

I certainly hope that my kids remember this wonderful experience and strongly encourage anyone to take their kids. Babies can attend the circus for free through their Baby’s First Circus promotion. Actually, take anyone. My grandma was in her 90s before attending her first circus, also Ringling Bros. and Barnum & Bailey and she even loved it! If you went last year, don’t think you can’t go again because they have different performances in alternating years. 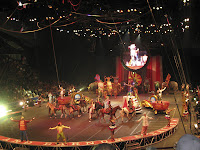 The Kids Are Old Enough for Jewelry

Button, Button, Who’s Got the Button?