Home / Recreation / Movies / What We Watched: Marvel Studios’ Doctor Strange in the Multiverse of Madness 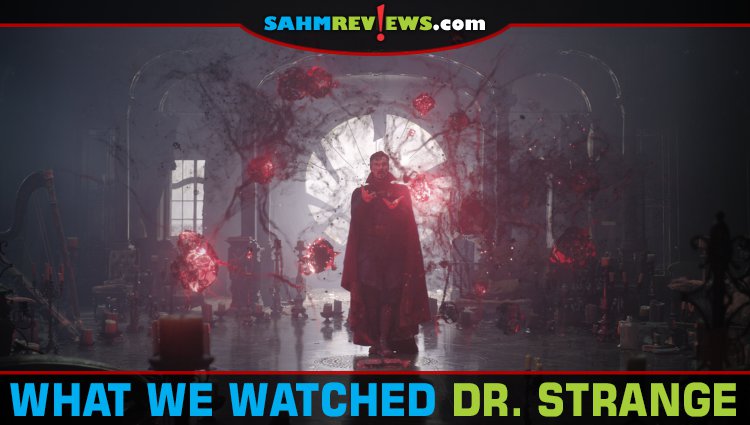 What We Watched: Marvel Studios’ Doctor Strange in the Multiverse of Madness

It was only a matter of time before our kids’ schedules and a Marvel movie release didn’t sync. Enjoying movies together, especially Marvel, has been something we’ve enjoyed since they were young. While we love our daughters dearly, we weren’t going to wait around to see Doctor Strange in the Multiverse of Madness. We didn’t want any spoilers and the longer you wait, the more likely you’ll stumble across some. But don’t worry, you’re safe to keep reading. I’ll carefully word things so I don’t ruin it for those of you who haven’t been able to see it yet.

Since I wanted to keep it spoiler-free, this post is going to be pretty brief. I decided to address a few things people have been asking and commenting about on social media. Keep reading to find out 1) if it is kid-friendly, 2) whether to watch other Marvel properties to understand it, 3) notable cameos and, of course, 4) scoop about during/after credit scenes.

Whether you call it good or bad parenting is subjective, but we’ve been known to take our kids to see a variety of genres of movies throughout their youth. Our daughters were 15 and 13 when we took them to see Deadpool 2 which was rated R, mostly for language and violence. Despite World War Z’s PG-13 rating and horror/adventure classification, we took them at 9 and 10. Before doing so, we would see it first without them to determine if it was something they could handle. We used movies, TV shows and board games to engage in open dialog with the girls about what is real (or realistic) versus what is theatrical or entertainment. Doctor Strange in the Multiverse of Madness isn’t your typical superhero movie. A lot of people are calling it a horror film, but to me it was more of a scary thriller than a horror. Is it appropriate for young kids? Only a parent can answer whether their kids can digest this movie in a healthy way and they can only do that by seeing it first without the kids.

If you are a Marvel fanatic and haven’t finished WandaVision yet, plan to binge the rest of it before buying tickets to Doctor Strange in the Multiverse of Madness. The plot lines are very entangled and it’s relevant enough that I would even encourage non-fanatics to invest the few hours to binge that series. (It’s really good so it’s not like a punishment!) While it’s not as crucial, if you have time then watch Spider-Man: No Way Home because it really does put the whole Multiverse concept into better perspective. While you’re at it, there are some details from What If…? that also show up. Not a must-watch in order to enjoy and understand this sequel to Doctor Strange, but it does help. I don’t want to get on a soap box, but if you haven’t already been keeping up on all the Marvel movies and series, you should be. They’re SO GOOD.

One of the things that was spoiled about Spider-Man: No Way Home involved discovery about noteworthy cameos. Marvel is known for integrating various characters into their feature films and multi-season shows. It’s how they tie various aspects of the Marvel Cinematic Universe together and open doors to new storylines. When we first saw Guardians of the Galaxy, would we have expected Thor to show up? No. It was a completely different style of movie. And Spider-Man has always stood alone but his presence in Captain America: Civil War meant more depth to his movies and the opportunity to see favorites like Tony Stark and Happy Hogan showing up as regulars outside of Iron Man related features. There are multiple cameos in Doctor Strange in the Multiverse of Madness, but learning about any of them doesn’t really spoil the movie. So if you hear about someone being in it, don’t let it cast a negative light on the person who spilled those beans.

As for credits after the movie, you already know the answer without me needing to say it. When was the last time you saw a Marvel movie that didn’t include some kind of tidbit during or after the credits? It’s usually a peek into a story that has yet to be revealed. They don’t stray far from course at the end of Doctor Strange in the Multiverse of Madness. There is, indeed, a mid-credit snippit that is story-driven as well as one after the credits that’s just fun.

You don’t have to be a die-hard Marvel fanatic to enjoy Doctor Strange in the Multiverse of Madness. The plot is solid and (mostly) explains itself. You can enjoy it without knowing all the backstory of all the characters. It just makes it more enjoyable if you do.

One comment on “What We Watched: Marvel Studios’ Doctor Strange in the Multiverse of Madness”