Unless you’ve been living under a rock, no doubt you are familiar with crowdsourcing platforms. Whether it’s funding for a charity through something like Donor’s Choose, by individuals who are struggling and asking for donations on GoFundMe, fan-funded activities through Patreon or product launches on sites like Indiegogo or Kickstarter, the web has provided a lot of unique opportunities outside of the traditional business model. On occasion, we share details about a board game on Kickstarter either because we’ve tried it in advance, are familiar with the publisher, know the designer or simply think it’s cool. One of the first times we encouraged you to consider a Kickstarter was back in 2015 for Calliope Games’ Titan series. The plan was to release three games per year by a handful of the industry’s most respected game designers. It would be akin to making reservations for a restaurant that would serve multiple courses all by different famous chefs. Since that time, we’ve been sharing details about the various games including Hive Mind, Running with the Bulls, Menu Masters and Ancestree. We played demo copies of the next batch at last year’s Gen Con and are looking forward to seeing those roll out. It only makes sense for us to continue to tell you about these releases. This time, we’ll walk you through an overview of Calliope Games’ Capital City.

Like an episode out of Bonanza or Little House on the Prairie, the west didn’t just appear out of nowhere. It took a lot of sacrifice and hard work for people to build it up. In Capital City, you and your opponents will be those people as you try to hire city slickers as they disembark from the train. But not everyone is right for the job. You’ll need to find the right people with the right skills and then hopefully some of their kinfolk to join them. Incorporating an auction and some engine-building techniques, hopefully your city will be the best out there! Begin by determining the number of players and adjusting the character deck accordingly. Then shuffle the building and character decks separately in the center of the table. Season cards are stacked in order Spring to Winter and placed in the center of the table. With the highest number on top, stack priority cards equal to the number of players. Create a general supply of Victory Point tokens and money.  Each player takes a reference card and $10.

At the beginning of each season, you’ll create a train and a main street with the details varying based on the season. The train is composed of a random assortment of characters that are dealt face down. The number of trains varies from season to season but the number of characters per train is always one more than the number of players. Main street is comprised of Building cards, dealt face up for all players to see. 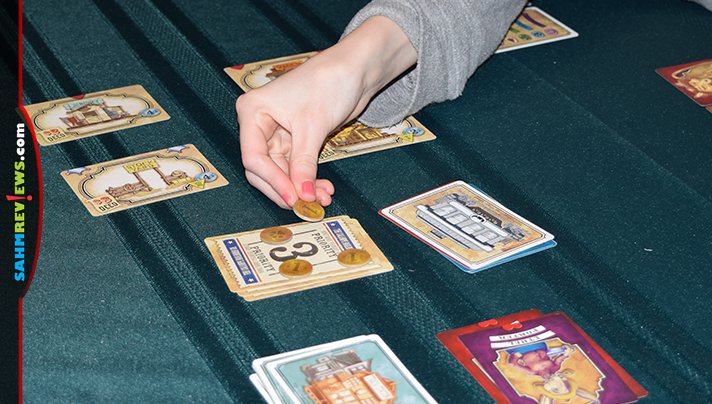 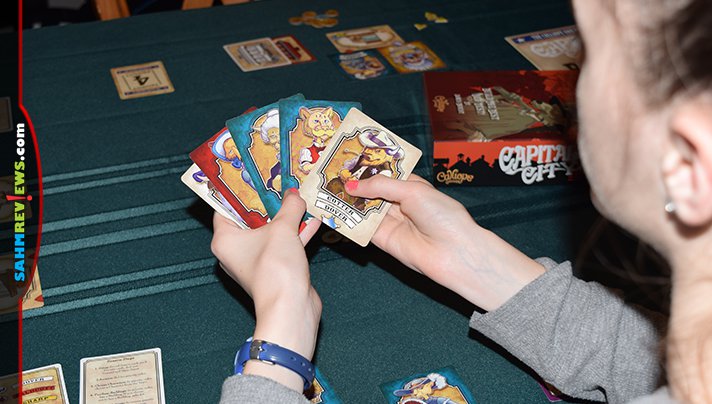 After the auction has ended, you’ll go in priority order to select a character from the train. In seasons where there are two trains, you’ll select one from each train, in order based on your priority number. You’ll want to pay attention to the family (background color) as well as their abilities (the gear, star or heart) on the bottom of the card. These will line up with the buildings that match their skills. 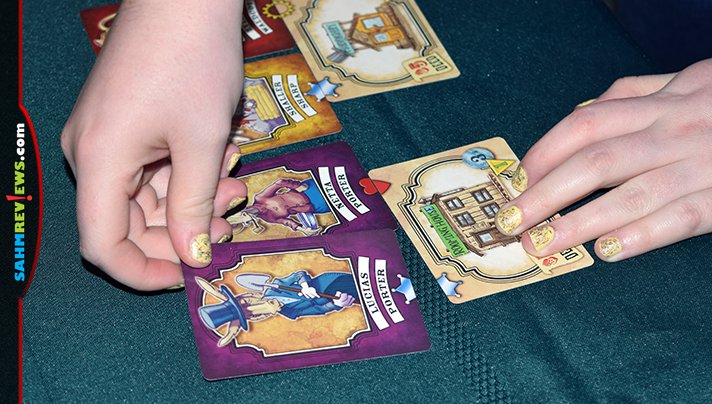 Next, one again in Priority Order, players may pay the deed cost to purchase a building from Main Street. If you don’t have enough money to purchase a building or opt not to, you’ll collect $5 from the general supply. Finally, in reverse Priority Order, players take turns attaching characters to their buildings. When you attach a character to a building, it activates that character’s building as well as family members across the town. 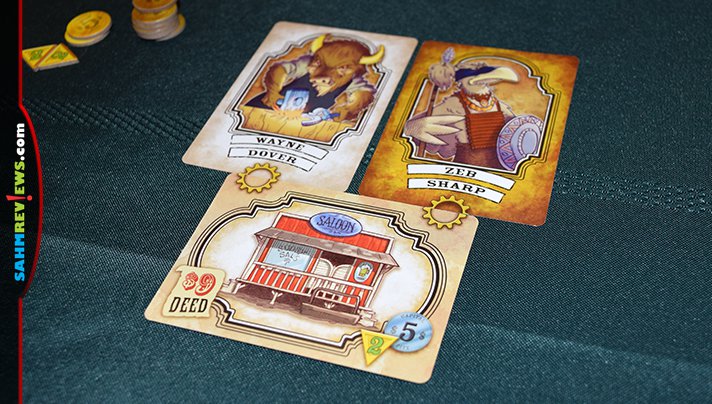 After all opponents have attached and activated their characters, you move on to the reset phase. Everyone returns their Priority Cards to the pool, a new season is activated and you populate the train(s) and Main Street accordingly. You’ll repeat this process for all seasons then determine the winner based on who has earned the most Victory Points.

One of my favorite things about Calliope Games is that they focus on crafting games that play well for six people. While we typically play with only four, this option allows us to play games when friends or neighbors are over. You can make your way out west by picking up a copy of Capital City direct from Calliope Games, on Amazon or from a local game store. If you’re following Calliope Games on Twitter and Facebook, you’ll be among the first to learn about the next batch of Titan Series games as well as other releases too!

What type of Main Street building would you be best suited to run?