Are you one of those people that reads the synopsis on the book jacket or do you just open it up and start reading? I’ve noticed that board gamers have similar engagement patterns. Some open the box, set it up and go. Others embrace the game and the story behind it while taking time to read “flavor text“, content that doesn’t impact the play. Then there’s me… I land somewhere in the middle. As I sat down to read about Kitara from IELLO, I thought to myself, “Awesome. This is a cooperative game! They’re one of my favorite genres.” 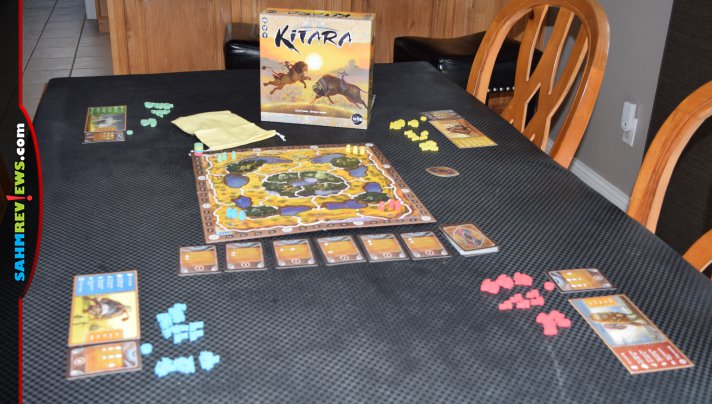 Centuries ago, the Kitara Empire was thriving in the Great Lakes of Africa, filled with unity and peace. After three generations, all that was left were fragmented, rival kingdoms with a dream of reunifying the Empire. Sounds cooperative, doesn’t it? Nope. Everyone can want the best from their community, but if everyone is vying for control then harmony is the last thing you see. I think we can all relate to that. In Kitara, players are all recruiting, moving and working to rejoin the tribes, but only the most successful will become the new ruler. Based on player count, place the appropriate board in the center of the table. Each player takes a Starting Kingdom card, a Kingdom sheet and the associated pawns and markers of that color. Create a draw deck of Kingdom cards that consists of five Ages of cards. Turn six face-up in the row alongside the deck. Set the bag, filled with hero tokens, within reach of all players. Select a starting player and get ready to vie for prosperity. 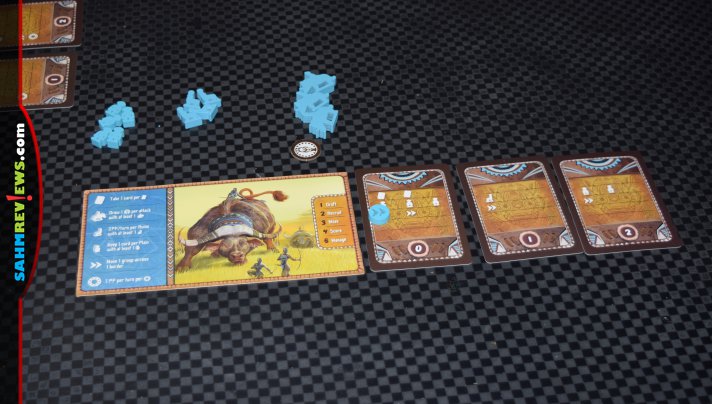 On your turn, you’ll draft cards, recruit members, move, score then manage your tribe. Each card that you draft indicates what and how much you’ll be able to do on your turn. During the draft phase, you’ll look at the card symbol on the top row of your current Kingdom cards to determine which cards you can choose from in the row. In other words, just because there are six cards in the row doesn’t mean you’ll be able to pick any that you want. Once you’ve selected a card, set it to the right of any already existing in your kingdom. Shift the cards in the row to fill the space then add a new card to the spot next to the draw deck. You’ll reference the card you drafted when you recruit and move. 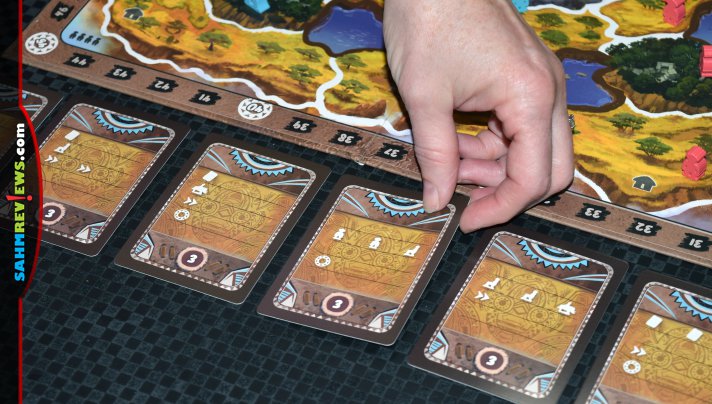 On the second line of this round’s drafted card, you’ll find between 0-3 pawn symbols. These are the people you’re allowed to recruit during this turn. Take them from your pool and add them to any of your occupied spaces on the board. The third line indicates how many movements you can take. One movement applies to as many pawns from a single location to an adjoining location. Additional movements may be used to move that same group, a portion of that group or even pawns in an entirely different territory. 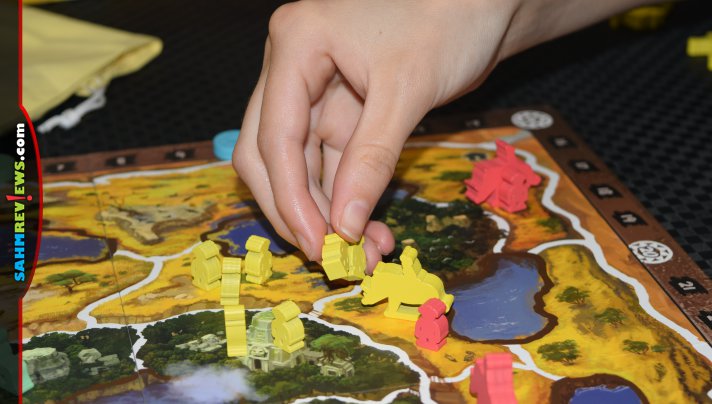 The movement phase actually includes attacking and retreating as soon as a conflict presents itself. If you move into a space occupied by an opponent, the battle is simply a matter of who has more pawns there so you aren’t able to move there if you cannot conquer it. Your opponent will retreat to their nearest occupied territory. Because of this rule, you cannot move into a space if it’s the only one occupied by that player. If your attack includes a hero pawn then you’ll draw a Hero token from the bag. These tokens are an alternate way to earn points. Although you may earn one on each movement, you’ll only be allowed to keep one per turn. The final line on the drafted card reflects the number of points you’ll earn on this turn. Score one for each symbol plus 2 for each Ruin space that contains a master-animal pawn.

Of course, people in your kingdom need to be fed, represented by your cards. Each Savanna space with a warrior pawn feeds one card at the end of your turn. If you have more cards than warrior spaces then you’ll need to discard any that are left unfed. When you remove those from your kingdom, you’ll also remove pawns that are depicted on them. The game continues until an Age 5 card is revealed at which point the round is completed before the final round. At the end of the game, players reveal their hidden Hero prosperity tokens and move the associated spaces on the prosperity track. The player with the most is declared the ruler of the newly merged empire.

At it’s roots, Kitara is a battle game without aggressive combat moves. This makes Kitara a family-friendly take on this type of game. You can learn about other games on IELLO’s upcoming release list by following them on social media (Facebook, Twitter). If you’re ready to help reunite the Kitara Empire, check for copies at your local game store, on IELLO’s website or simply add the game to your Amazon cart. In the meantime, enter to win a copy using the widget below!