I recently told someone that I always try to look for the positive, even in difficult situations. This holds true for conversations on Facebook where I only share things that are relevant, add value to the conversation or make people smile. I compliment people when I see an opportunity and share praise when possible, as well. I’ve always felt that if you put good into the world, good will return to you. Be friendly. Be helpful. See the good in people. Give people the benefit of the doubt. But when you look at the world through rose-colored glasses, people often find ways to take advantage of that and it takes extra effort to remain positive. It’s even more difficult to teach these principles to our kids. Especially when they see first hand how people can be manipulative, cheat the system and intentionally hurt others. A friend recommended Ted Lasso, a new series on Apple TV+ and said we would really enjoy it. His description of it as a “feel-good” show was spot on. I love it and it represents the attitude I wish I could emulate for my kids every day.

I so desperately want to tell you all about Ted Lasso and the incredible story that unfolds brilliantly with each new episode. But I can’t. Or better yet, I won’t. One of the best things about this show is seeing the growth and change that can happen when someone is bold enough to believe in being a good person and doing the right thing. Instead, I want to share a general overview about the show and simply say, “Make time to watch Ted Lasso.”

In addition to starring, Sudeikis serves as executive producer, alongside Bill Lawrence (“Scrubs”) via his Doozer Productions, in association with Warner Bros. Television and Universal Television, a division of NBCUniversal Content. Doozer’s Jeff Ingold also serves as an executive producer with Liza Katzer as co-executive producer. The series was developed by Sudeikis, Lawrence, Joe Kelly and Brendan Hunt, and is based on the pre-existing format and characters from NBC Sports.” 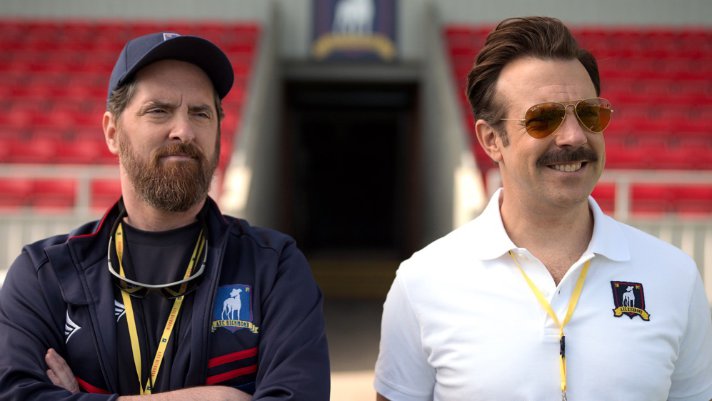 Coach Ted Lasso (Jason Sudeikis) and his hometown colleague, Coach Beard (Brendan Hunt) exemplify everything positive you could hope for in human beings, regardless of their leadership position. They compliment each other (literally and figuratively) throughout the series as they make a name for themselves. Ted Lasso asks and addresses people by name, supports their businesses, requests feedback and input from those more knowledgeable and implements change where possible. With a mix of comedy and heartfelt commentary, Ted Lasso does the things that make people feel special. He brings joy to the world.

It wasn’t chance that Ted Lasso was hired to take on the job as gaffer (coach) for a sport he had never coached before. It was a calculated employment decision by the team’s owner, Rebecca (Hannah Waddingham). She’s a bitter, resentful woman with the intention of running the team into the ground. She’s tasked Higgins (Jeremy Swift) with the responsibility of making things worse. But Higgins is a good-hearted man who disobeys his boss on more than one occasion. Whether it’s intentional or not remains to be seen. One thing is for certain, it’s hard to resist the positivity that Ted Lasso brings when he walks into the room.

Then there are the two main soccer players who the subplots revolve around. They’re both incredibly talented athletes at two very different stages in their lives. Jamie (Phil Dunster) is a young, arrogant ball hog while Roy (Brett Goldstein) is a seasoned player filled with anger. We are only a handful of episodes in and already love how these characters are developing.

In a time where there is so much negativity and anger, Ted Lasso is a breath of fresh air. If you’re looking for something to watch, put this on the top of your list. One caveat… the language is rough so keep your young kids out of earshot when you’re watching! You can find Ted Lasso on Apple TV+. Ted Lasso is the epitome of what this world needs right now. As you watch it, think about which of his characteristics you could incorporate into your own life.

What is something you do to bring happiness to the people around you?