When I enjoy something, I tend to get obsessive about it. If it’s a board game, I’ll want to play it over and over. A television show becomes the one I suggest every time we sit down on the couch. Video game? I’ll offer to load No Man’s Sky into the XBox for Madison or Scott. When we used to collect baseball cards, I would search for rare ones like the kind you could only get at restaurants or were provided to teachers. One of the oddest obsessions I had was to track The Ferengi Rules of Acquisition. Whenever I would hear a new one mentioned on the series, I would quickly jot it down in a notebook. It drove me crazy that I couldn’t fill in all the numbers. At the time, there wasn’t such a thing as simply Googling it. Somewhere in the stacks of stuff I own is the notebook where I wrote them down, but I have no idea where. But I don’t feel compelled to hunt for it since Scott decided to buy me a Rules of Acquisition book years later anyhow. 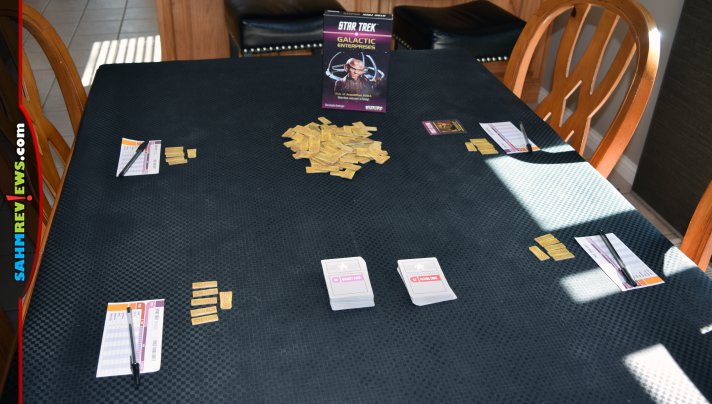 I had completely forgotten about it until I found out about Star Trek: Galactic Enterprises from WizKids. Last week we used Looney Labs’ Star Trek games to involve the girls in the franchise and this game was an opportunity to introduce another side of it. In this game, everyone takes on roles as shop owners on the Deep Space Nine promenade. Your goal, of course, is to make the most profit. Rule of Acquisition #21: Never put friendship above profit. You’ll want to remember that as you play because this game has nothing to do with being friends and everything about profit. Set up the game by shuffling the market and action decks separately and placing them in the center of the table. Give each player 10 Latinum, one PADD and something to write with. Excess Latinum forms a bank in the center of the table. Select a player to be the first clerk and you’re ready to play! 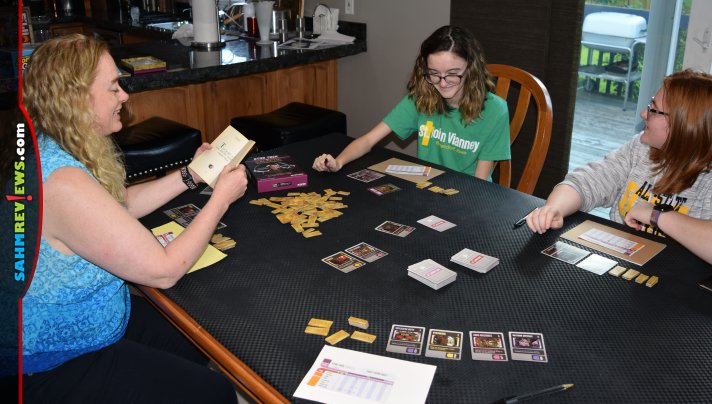 Star Trek: Galactic Enterprise will take place over ten rounds with each consisting of four phases: 1) Financial Mandate, 2) Latinum Squeeze, 3) Commission and finally, 4) Pass the First Clerk Card. To simplify that, it’s three phases then give the start player marker to the next person, clockwise. 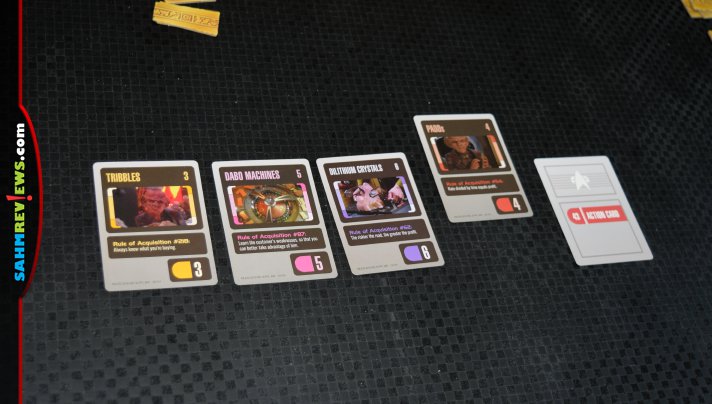 The active player (First Clerk) deals a row of Galactic Market Cards from the deck into a face-up row in the center of the table. Next to that, a face-down Action Card is added to the row. During the Financial Mandate phase, players will bid on the available cards. The First Clerk will select one of the items in the row and put it up for bid. The starting price is listed on the bottom of each card. That player will bid at least the minimum or they may pass. If they’re opting to bid on the Action Card, the minimum is 1 Latinum. Continue around the table with each player raising or passing. 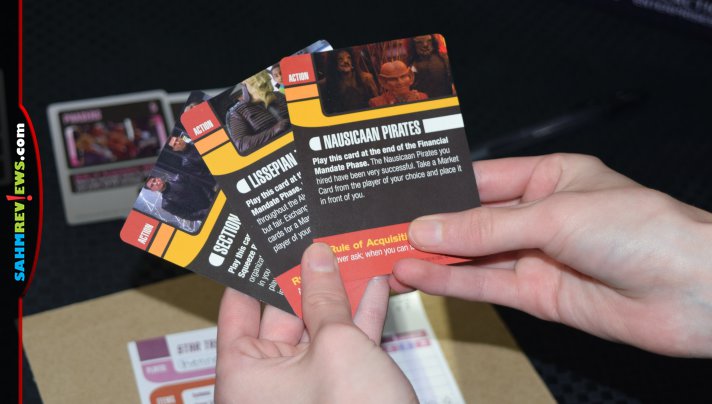 Bidding ends when no one raises and the high bidder collects their card and makes the associated payment. Winning market cards are placed face-up in front of the bidder while Action cards are kept secret. The First Clerk then selects another card and the process continues with remaining players. Once you win a bid, you may no longer bid on cards for that round. 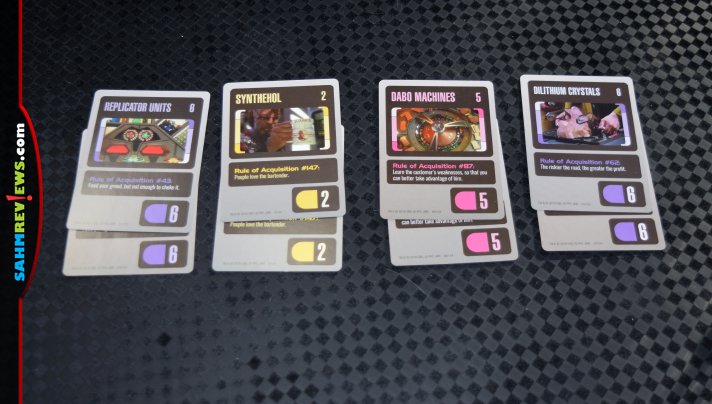 After the bidding process is completed, the Latinum Squeeze phase begins. This is where Ferengi skills of negotiation kick in. All players discuss the prices they plan to charge on the items they have in front of them. Since the goal is to make as much profit as possible, you’ll want to raise the price as much as you can. Make deals with players who have the same item… price fixing is allowed! Unfortunately, Ferengi are also savvy and can renege on their agreement if it serves them well. Rule #99: Trust is the biggest liability of all. Once discussions are completed, everyone secretly writes their sales prices in the appropriate row on their PADDS. 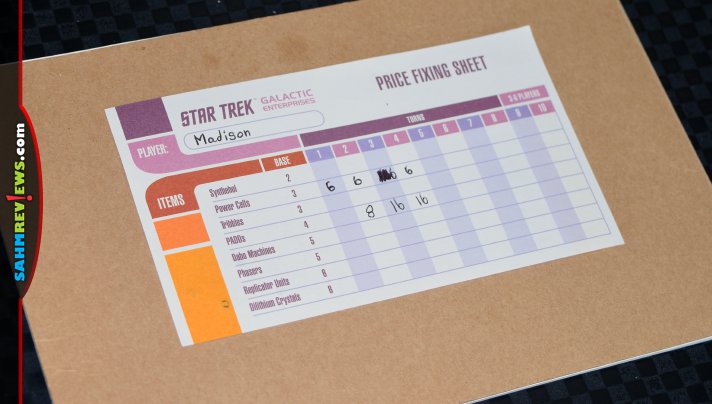 Now it’s time for profit! Everyone reveals their PADDS and The First Clerk goes through the list one at a time to determine the prices. The player with the lowest price is able to collect money for each card they own of that type. In addition, they’ll collect a 2 Latinum bonus per card. The player with the highest price does NOT collect anything, but other players who own that item collect based on their sale price. If everyone writes the same price then everyone gets paid. 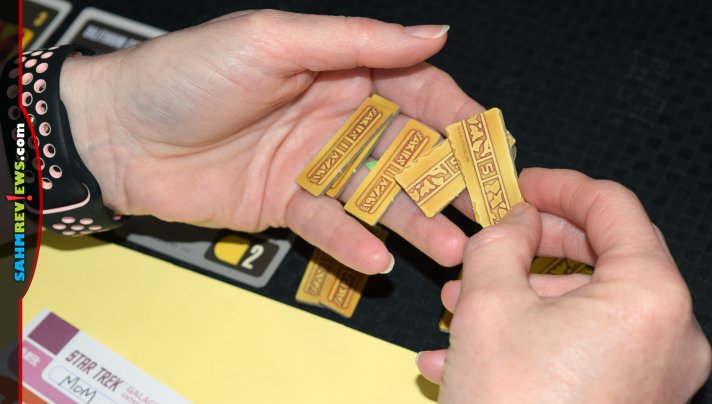 The first player passes and the process begins again. Throughout this process, action cards can be played to disrupt business. After the designated number of rounds, everyone calculates how much Latinum they have plus the value of the Market cards and the Ferengi with the most is the winner. If you’re up for undercutting your friends at the game table, Star Trek Galactic Enterprises is worth investing in. Check with your local game store for availability (curbside pickup is a great option!) or order a copy from Amazon. Learn about the latest products from WizKids by following them on Facebook and Twitter.

Are you familiar with The Ferengi Rules of Acquisition?