If you yelled out “Holy Cow” anywhere in the upper Midwest, everyone would understand you’re giving tribute to the greatest baseball announcer ever to live. Harry Carey was the voice of the Chicago Cubs for sixteen years and us Cub fans forgive him for beginning his career with our rivals, the St. Louis Cardinals. Even though he was there for 25 years, everyone equates Harry Carey with the Cubs. Sorry St. Louis!

I’ve been a Cubs fan ever since seeing my first game on WGN when we got cable TV in the 80’s. When we were at our local Goodwill last week, we spotted a card game that reminded us of our team. Sadly, it had nothing to do with baseball. Holey Cow by Briarpatch was purposely misspelled to accurately describe the game inside – a game about cows with holes!

Included in the box you’ll find six colored tokens for tracking your score on the score board along with 30 Holey Cow cards. Each of these uniquely decorated (and named) cows have various numbers of holes in different positions. Why? That will make sense in a minute. 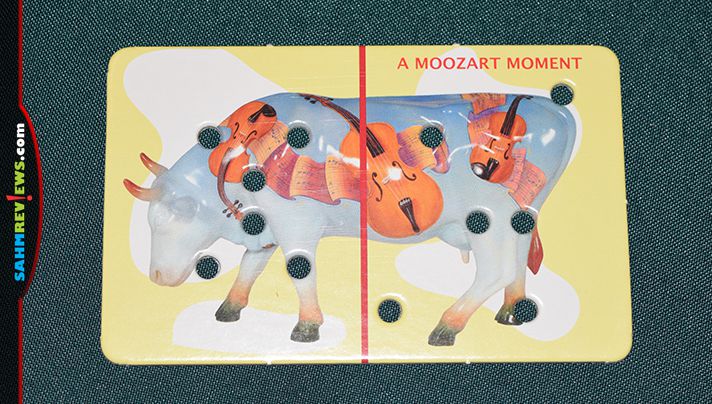 All 30 cards are dealt out to the players evenly (remove two cards for four players) and are placed in a stack directly in front of you with the words “Holey Cow” facing up. A dealer is determined, which will pass on each hand, but everyone will be taking their turns at the same time. 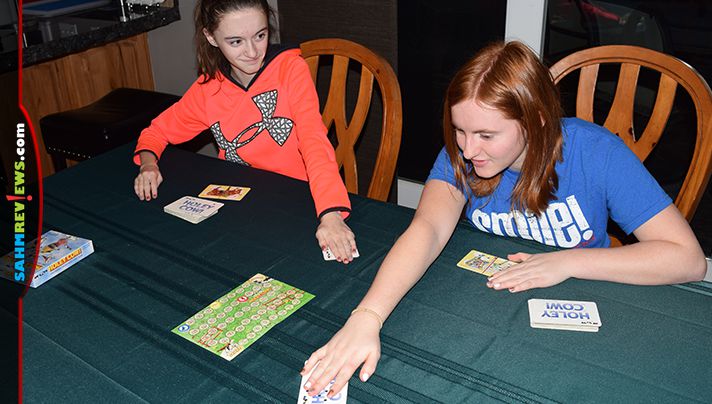 Players will take the top card from their stack and place it cow side up in front of them. Then they’ll quickly take the next card from the stack, leave it face down and pass it to the player on their left. As they are being passed, the current dealer will call out “Heads”, “Tails” or “Betsy”. 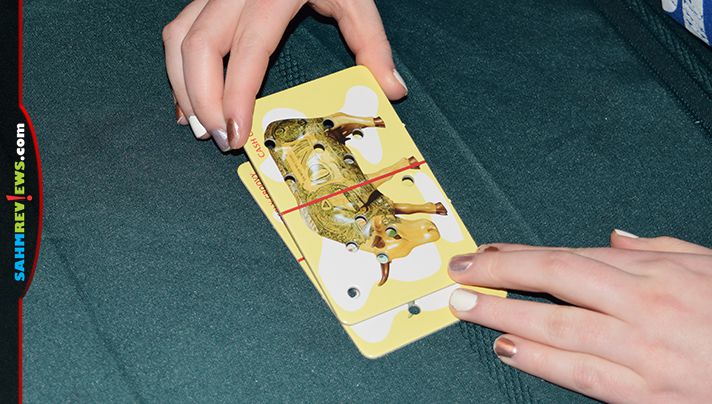 Everyone picks up the card they received from the player on their right and places it directly on top of their previous cow. Both cards are picked up and examined for holes that line up and pass through both cards. If the dealer called “Heads”, only the holes on the left side of the card are counted. When “Tails” is called, you guess it, use the right side. “Betsy” refers to the whole cow, so you’ll sum up the total number of see-through holes on the entire card. 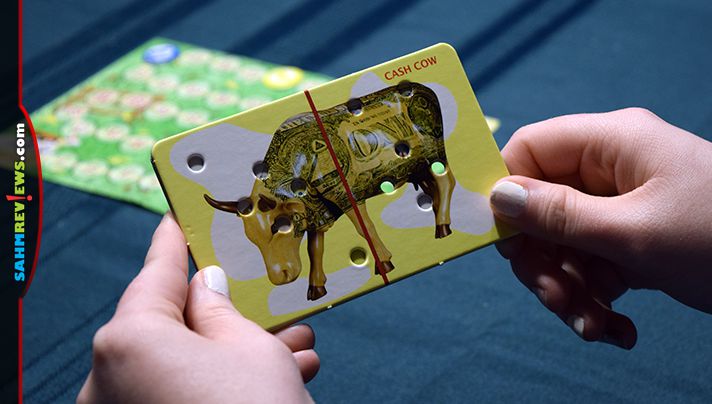 If you believe you have more holes than anyone else, call out “Holey Cow”. If you believe you have the fewest, proclaim “Yellow Walk” (Yeloh Woc, Holey Cow backwards). If you are not sure about either, keep quiet and let someone else answer. The first person to shout out either term is the Bull for this hand and only their claim matters. 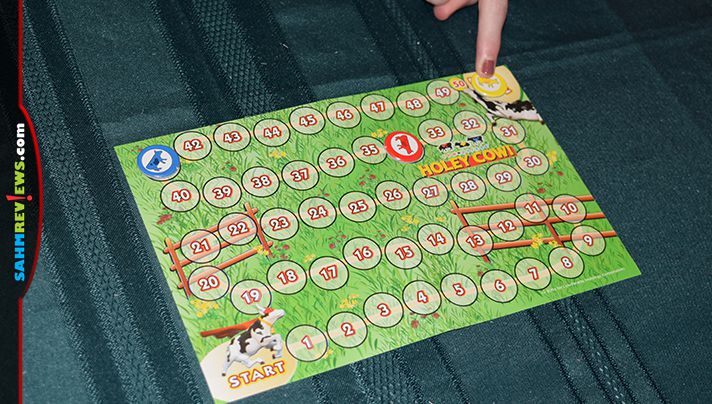 If they are correct (either highest or lowest, depending on what they called), add each player’s open holes together and award those points to the Bull. If the Bull is incorrect, everyone else is awarded the total score! If there is a tie for most or fewest, and one of those includes the Bull, all tied players receive zero points and everyone else the full total! After scoring, both cards are put at the bottom of each player’s own deck, the dealer responsibility passes clockwise and another hand is played. The first person to accumulate 50 points or more is the winner of Holey Cow!

Originally issued in 2005, this copy had never been played as we needed to punch out all the holes in the cows and player tokens from their sheet. We honestly didn’t have high expectations for Holey Cow since the BGG rating was so low (3.99). Maybe it’s just us, but we had a lot of fun playing. Mostly to point out each others’ bad luck or poor guessing! You probably won’t find copies on Amazon, but there are plenty in new and used condition on eBay for under $15!

What’s one game you love but everyone else hates?